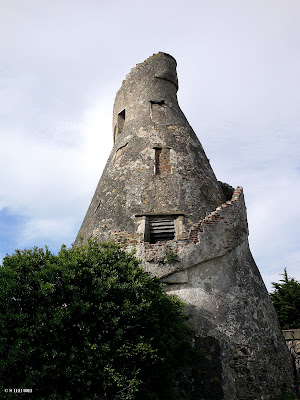 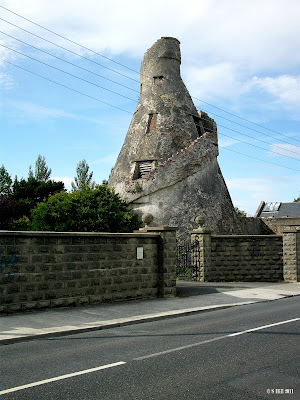 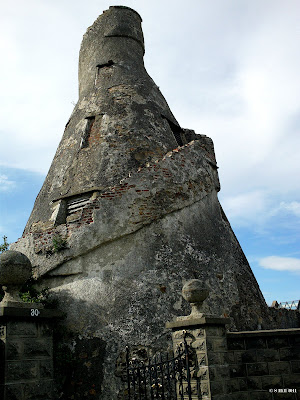 The Bottle Tower or Hall's Barn as it was originally called, was commissioned in 1743 by Major Hall of Whitehall House which stood on the land on which the Tower still stands. It is believed to have been created as relief work for the local poor who were still reeling from a then recent severe famine. Designed as a granary barn with living quarters on the upper level it was a similar structure to the more prominent "Wonderful Barn" which was constructed on the Castletown estate in Leixlip around the same time. (see post here)
The structure, conical in shape with stone steps spiraling around the exterior, can be said to look a little like an old milk bottle and more than likely that's where the present name originated.
It now stands close to the road just behind the walls of a private residence, although nobody seemed to mind when we invaded the garden to take some photos. The doors are sadly boarded up so no access is possible and the outside steps are quite worn and too hazardous to attempt to climb, but it's worth seeing as it appears to be only one of two of these structures standing, the other being the aforementioned "Wonderful Barn".
To find The Bottle Tower take the R112 from Dundrum and turn left at the Bottle Tower Pub (named of course after our subject) then swing right onto Nutgrove Avenue. When you reach the crossroads at Nutrove Shopping Centre take the right turn onto Whitehall Rd and follow on down until you see the Tower on your left. It is a residential area and you can park alongside it on the road.
Posted by Castlehunter at 20:39