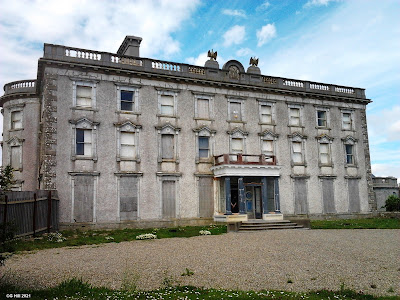 Above Image: The original entrance. 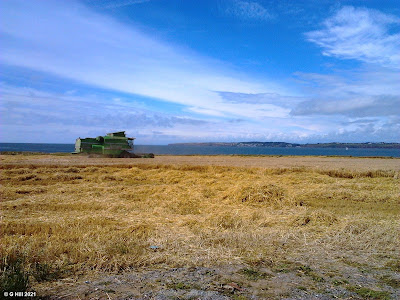 Above Image: Dunmore East in the distance from the grounds 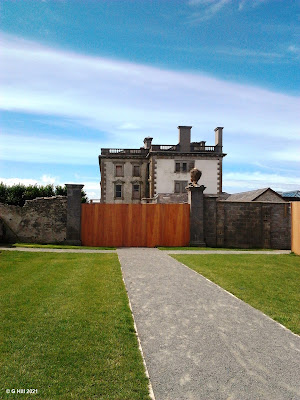 Above Image: Part of the gardens 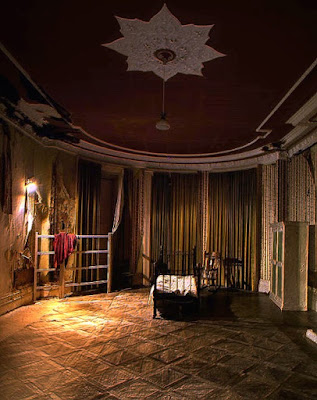 Above Image: The tapestry room 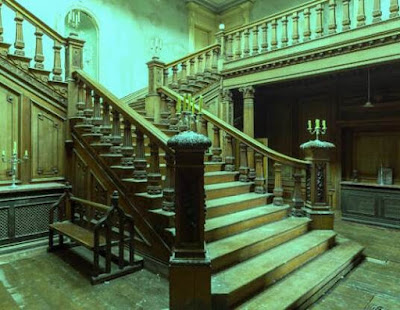 Above Image: The great staircase 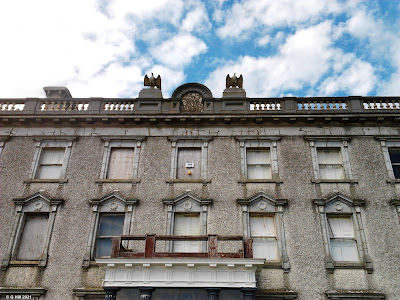 Above Image: Two great stone birds above the porch 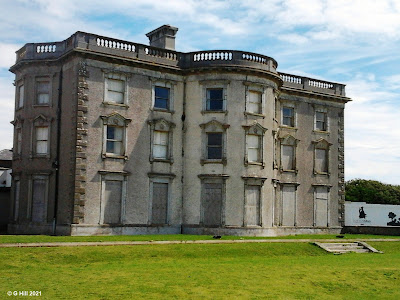 Above Image: Rear of the hall

I had the pleasure of visiting Loftus Hall a few years back when the house tours were in full swing and it's sad to see that it has been recently sold and that public access is for now at least not possible. Hopefully this will be temporary and it will be open to public viewing again in the future.The previous owner Aidan Quigley who bought the hall when it was falling slowly into ruin and then built it up into a popular attraction has to be commended for his enterprise. The new owner has not been made public but Aidan has said that he hopes the hall will go on to bigger and better things.

The history of the hall began when in 1350 when it replaced a castle built in 1170 by Raymond Les Gros who came to Ireland during the Norman invasion. The new building was named Redmond Hall after its new occupants and it remained so until the plantation when the hall and lands were granted to Dudley Loftus. It then became commonly known as Loftus hall. The house was renovated in the 1870's on the premise that a royal visit would ensue, but this never came to pass and the costs incurred bankrupted the estate leaving the house to fall into disrepair. It was bought by a Benedictine order in the early 20th century and subsequently in 1937 became a convent school for the Sisters of Providence. It spent a short period in the 1980s and 1990s being renovated and operated as a hotel before closing by century's end leaving it again blocked up and deteriorating..

Of course the noteriety of the hall which sits on the windblown Western side of the Hook peninsula is its haunting. On the tour we were regaled with tales of severed hands, the forlorn ghost of Anne Loftus and the very Devil himself. The origin of the haunting is said to have been born in 1766 and has a few variants on the tale the most oft told being the following: Apparently the inhabitants welcomed in a stranger on a stormy night and later over a game of cards found they had invited  not what seemed to be a lost soul but actually more like the goat of Mendes,(Satan to you and me). Anne Loftus on reaching down to pick up a dropped card saw the stranger's cloven hooves instead of feet and on letting out a shrill scream caused the stranger, his identity revealed, to exit the room through the roof in a ball of fire. Strangely this particular occurrence was mirrored in the Hellfire club in Dublin a number of years previously (see earlier post here).  Ann Loftus was so distressed by the event that her family, unable to console her or regain her calm, had to lock her away in a room where she eventually died a year later still distraught and in the grip of madness. It is her ghost that is said to haunt the hall as disturbances and unexplained events began to occur following her death.

The haunting and other strange occurrences were recorded over the years by the different orders of nuns in the early 20th century and later by subsequent owners. The hall's use as a hotel failed and even on our visit no one was allowed on the upper floors which were still in bad disrepair and as reported very badly haunted. We were shown the great staircase of a type that was one of three built to that the design the other two being in the Vatican and on the ill fated Titanic. We also were taken to the tapestry room where Anne ended her living days and whether it be by subtle suggestion or actual evocation this was indeed a very unsettling room which caused the peripherals of my eyesight a lot of distress during my time in there.

For now many of the windows still remain blocked up, paper is peeling from the walls inside and there is a general sense of inner distress in the house almost palpable in some sections.

Paranormal investigations were allowed by the owners and indeed bore fruitful results. Loftus hall is without doubt haunted, be it by spirits or by tragedy. Regardless, its eerie stain will stay with you long after you have left its domain.

To find the hall take the R733 from Wellingtonbridge heading West and after approx. 8KM you will reach a crossroads with the R734. There is a large sign stating "Welcome to the Hook" and a road sign pointing left for Fethard. Turn left at the crossroads and follow the road until you enter Fethard, a pretty little seaside village.  About halfway up the main street take the right hand turn just after the pharmacy and continue on this road for approx 1.6KM until you see the sign for Loftus hall on your right. The entrance gate is flanked by pillars. Hopefully these directions will have purpose again soon and a visit can be made.

Posted by Castlehunter at 16:28 No comments: