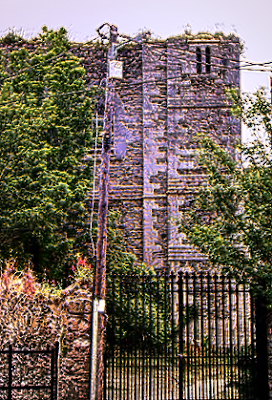 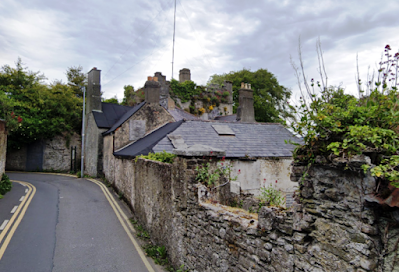 Above Image: Top of SE face visible from Church Lane 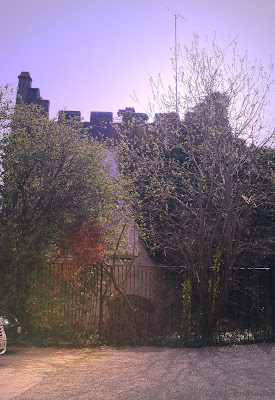 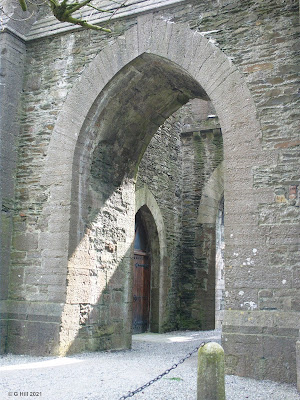 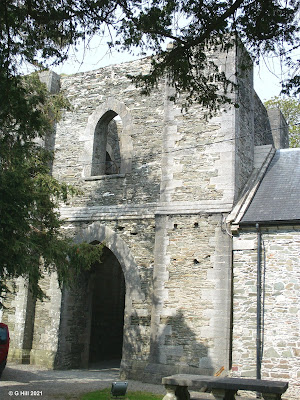 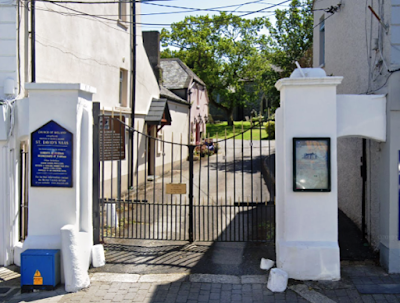 Above Image: Entrance to church from Main Street 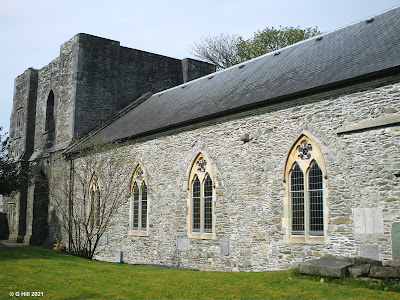 In the centre of Naas town these two sites are adjacent to one another, so it seemed appropriate to document them in the same post.

The remains of the castle of Naas stands a bit

forlorn now on a patch of private land. It is slowly falling into disrepair and is in desperate need of care which is a shame as it incorporates parts of one of the oldest Norman structures in the country.

The castle according to local history, which today in its present form is known as St. David's castle, was once called the castle of King John. He had visited Ireland twice once in 1206 and then again four years later. On his subsequent visit it is said that he formed a parliamentary assembly and this is likely to have taken place in the recently built castle.

Naas became a Norman stronghold and was given powers by Henry IV in 1409 that allowed taxes to be collected and to have the town fortified. The castle found itself included in these plans and became a part of the walled structures surrounding the town. The castle was restructured and the town became a vital part of the defence known as "The Pale"

The tower we see today has within it a stone staircase and consists of three storeys. The vaulting is still extant from the original  Norman structure.

In the 1730's it was converted into a dwelling house for the rector of the Church of Ireland and so its association with St. David's came about. A house was also added to the structure around this time.The building's last occupant was a Kildare surgeon but it has not been occupied since his death and the castle and land was sold in the early years of this century.

Today it is heading for ruin but the local council set a feasibility study into  its possible future use but backed off somewhat at the resulting cost of renovation. Apparently during the latter part of 2020 the site was sold to a new owner who wishes to live there. Hopefully this might mean that the owner will conserve and restore this important piece of local history.

Adjacent to the castle is St David's Church. This was originally the site of an early Christian building but was replaced by the Normans with a church dedicated to the Welsh Saint 'St David'. In the early 13th century it was recorded as being a possession of the Knights Hospitallers. The church in existence today was constructed in 1620 and incorporated a good deal of the old Norman building. Roughly 150 years later the steeple of this church had become ruinous and rather than repair it a decision was made to demolish it.

In 1781 the 3rd Earl of Mayo Joseph Bourke (1736-1794) who was bishop of Ferns and Leighlin and soon to be Archbishop of Tuam planned to replace the old steeple with a very impressive tall new structure that would be visible for miles. Bourke's family were from Naas and this may have been a pet project for him. Construction began but for some reason (probably the cost of such a venture) it remained uncompleted leaving only a roofless tower without a steeple. The bell placed inside the tower is said to date back to 1674. A plaque on an inner wall provides a quote from Bourke from 1783  "I found a ruin and left a steeple".Sadly his proclamation was a tad optimistic it seems.

To find the ruins take the junction 10 exit from the M7 motorway and follow the signs for the R445 to Naas. Once you cross over the motorway bridge travel straight through the next three small roundabouts following the R445 and drive until you reach a T-junction with South Main Street in Naas. Turn left here and continue until you pass Naas Town Hall on your left. The white pillared gates of St. David's Church are a few metres further and on the right hand side between two small shops. A pedestrian gate is usually open to visit the church grounds and while the bell tower is easily accessible the castle is only partially visible from the church grounds where it is fenced off or from the gate on nearby Church Lane that borders the grounds. In relation to parking there are several disc parking spaces available on sections of the Main Street,

Posted by Castlehunter at 16:50 No comments: