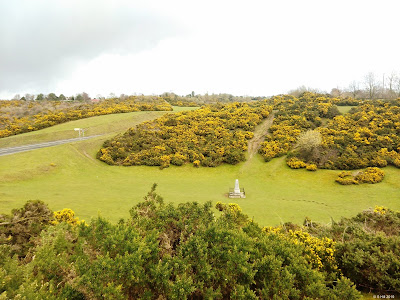 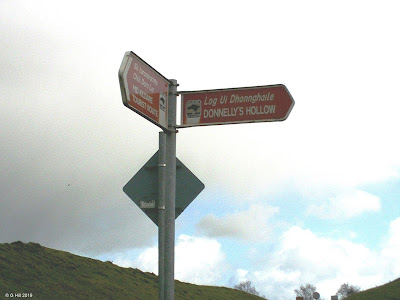 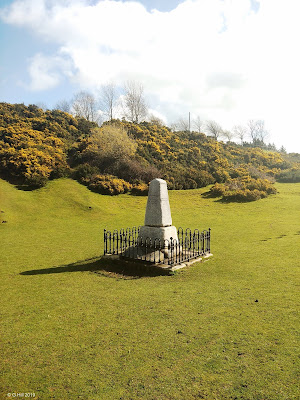 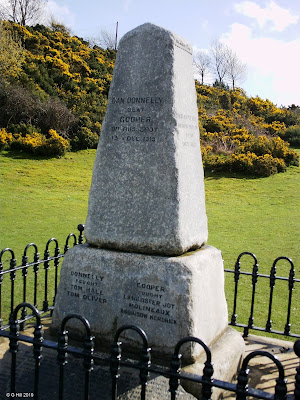 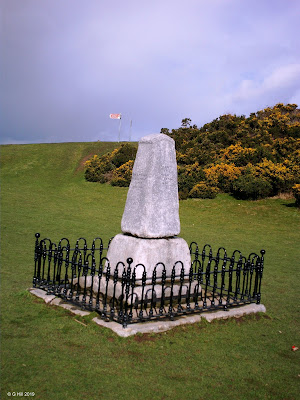 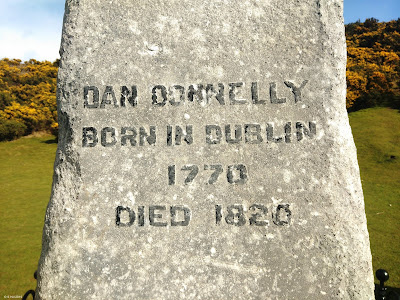 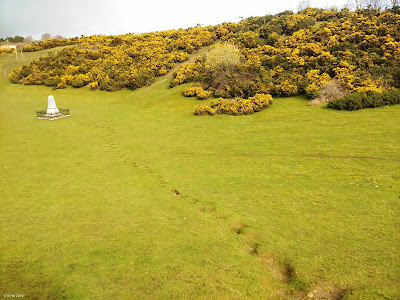 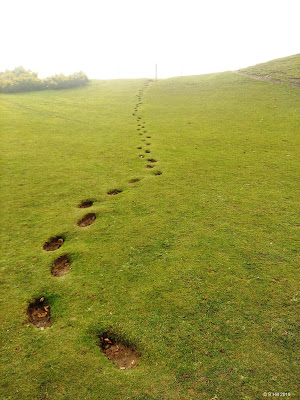 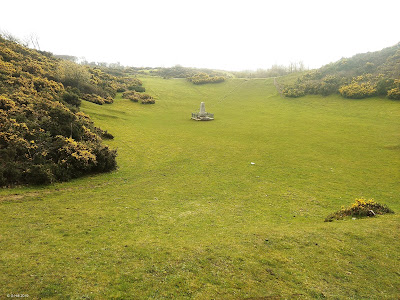 We came across this interesting oddity on a recent ruin hunt. Donnelly's Hollow derives it's name from a man called Dan Donnelly (1788-1820). The original name of this hollow was Belcher's Hollow but it was renamed in honour of Dan and his exploits here.
The Hollow like many in this beautiful area of  The Curragh in Co Kildare forms an almost natural amphitheatre and was the perfect spot for an event in 1815.
Dan Donnelly had a reputation as a hard drinker and well able to hold his own in a brawl. A bout in a coffee shop brought him to the attention of Captain Kelly a local horse trainer who saw potential in Donnelly and so set him up training in Kilcullen as a boxer. His first recorded fight was against a prominent boxer Tom Hall in September of 1814 and it ended after 20 minutes in controversy and was eventually deemed a draw. His second fight is his most famous and took place in Belcher's Hollow with 20,000 spectators coming far and wide to see him beat English boxer George Cooper. Donnelly's triumph was seen at the time to be a torch for nationalism and made him famous. His fame however over the following few years saw him being the target of fraudsters and he eventually died penniless in 1820. His body was buried in Bully's Acre in Kilmainham, Dublin with an attending crowd of 70,000.
The story takes a weird turn when his body was stolen by graverobbers and ended up in the hands of an eminent surgeon named.Hall, who wanted to study the muscle structure of this famous pugilist.The surgeon removed the right arm and had Donnelly's body reburied. He took the arm to Scotland where it remained for several years until it was purchased by a carnival and displayed in a "Peep show".
The arm found its way back to Ireland and was eventually procured by a sportsman called Tom Donnelly who donated it to "The Hideout" pub in Kilcullen where it was macarbrely displayed in a glass case for many years. It drew a lot of custom to the pub but when the pub was sold in 1997 the arm was removed by the former owners Des and Josephine Byrne to protect it and it is now in the private ownership of Mrs Byrne. The current owners of the pub are still seeking to have it put back on display but nothing has come of it yet.
The monument that now stands on the spot of the Donnelly-Cooper fight states he was born in 1770 but this appears to be incorrect as most records state his year of birth as 1788.
Standing on the roadside and looking down into the hollow you can really sense how perfect a theatre this was for the event. We visited on a day in march that certainly had many weathers. Shortly after we left we were caught up in a hailstorm of biblical proportions which could have been most unpleasant if we had still been down in the Hollow. You can spot the incoming cloud in some of the photos.
Leading uphill from the monument are a series of approx 45 indentations in the ground which look like footprints. Legend has it that ardent followers of Donnelly dug out the footprints left by Donnelly as he strode victoriously upwards after the bout. They are still here today and it is custom to follow them up although some can be difficult at times. Donnelly was a giant of a man and these are also a testament to him. We moved on to our ruin hunting and after the storm we regained sunny weather thankfully but I'm glad we took time to visit here.
To find Donnelly's Hollow take the M7 motorway and exit at junction 12 onto the R413 for Athgarvan. Drive for approx 600m and you will pass through Lumville Cross. 500m later you pass through a smaller crossroads with the L7043. Approx 150m onwards look for the signpost on your right for Donnelly's Hollow. There is a small parking area here on the right hand side.
Posted by Castlehunter at 16:59 No comments: