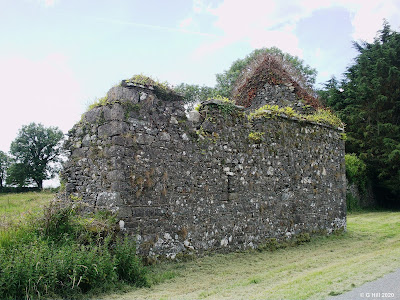 Above Image: Remains of East and North walls 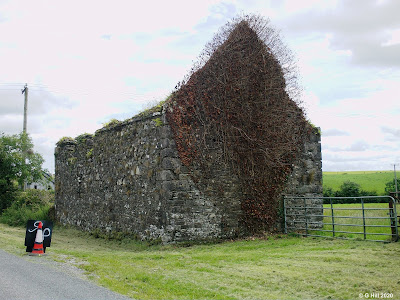 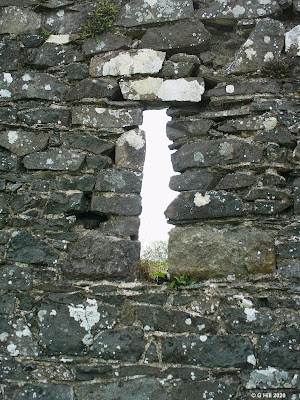 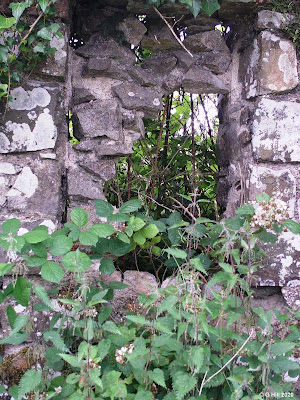 Above image: Window in separate wall West adjacent to gable 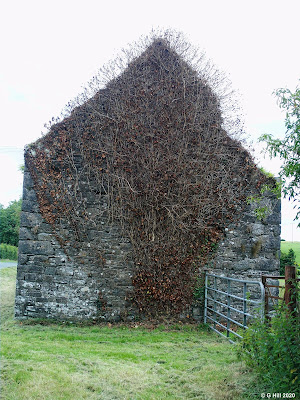 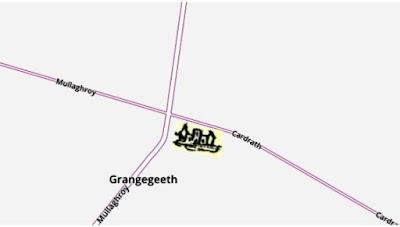 Above Image: Castle as was illustrated on Down Survey map
placed on modern map.
A peculiar site this in the fact that the castle tower that stood here is now non-extant but that the walls of a once attached house appear to remain.
The possibility of the present ruins here being of a later buildings than the castle cannot be overlooked but judging by reference to old maps there is still a likelihood.that this was part of the castle complex.
The original tower was apparently embellished by four round corner towers and stood a few metres from the roadside directly behind the current ruins and adjacent to it there was also a well. Somebody out there might be able to elaborate upon this and any information is welcome about the origin of these remnants,
The castle would probably have been built in the latter medieval times and the lands were depicted as having a house attached without roofing on a very old hand drawn map made by the Down Survey in 1654. The lands of Grangegeeth were owned by Mellifont Abbey (see earlier post here) but then went to Sir Edward Moore after the dissolution and to his son 1st Viscount Garret Moore in 1603. After Garret's death in 1627 they passed to his son Lord Charles Moore who died in a battle in the Confederate rebellion in 1643. Whatever fate the castle subsequently suffered or who indeed had resided there is not clear but it was certainly non-extant by 1778 according to historical maps of the time. The ordnance survey of 1837 (a most valuable resource) indicates the site of the former castle even going as far to depict a line drawing of the foundations. I checked the field for the possibility of some remains but as expected nothing is visible above ground.
To find the ruins take the N2 North of the crossroads in Slane village and drive for approx 5KM until you see a crossroads with a left turn onto the L5605. Turn left here and drive down the L5605 for approx 3KM and you will see the ruins by the roadside. You can park beside a field gate here.
Posted by Castlehunter at 16:17 No comments: