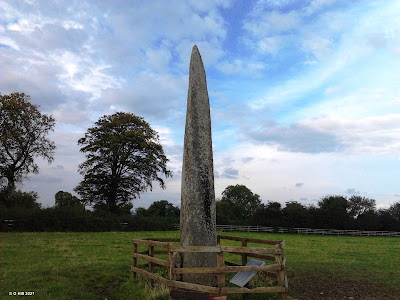 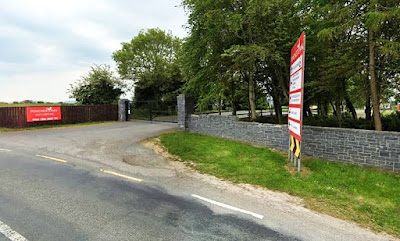 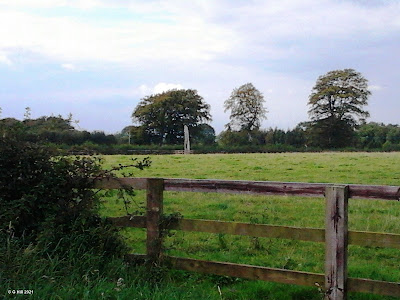 Above Image: The stone as seen from the track within the
racecourse grounds 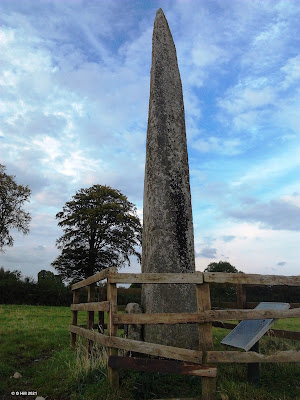 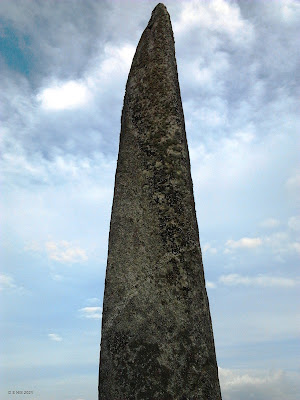 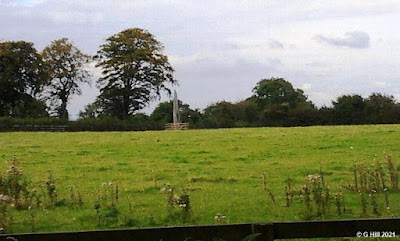 County Kildare has a number of large standing stones and this is one of the tallest. Standing over 19 feet in height it is composed of granite and from its square base it tapers to up a wedge shape at its summit. It is positioned in a field that is now incorporated into the Punchestown racecourse.
The stone dates back to the Bronze Age which places it sometime between 500BC and 2000BC. These type of stones served several different purposes. Some were raised as waymarkers others for commemorations but this particular one is thought to mark an ancient burial site. This site was important enough to be referenced by Gerald of Wales in 1188 in his work "Topographia Hibernica"
Prior to 1845 one of the Viscounts of Allen attempted to unearth the stone for transfer to his mansion gardens but a team of workers and horses only managed after extreme difficulty to leave it at a 60 degree angle and inevitably it succumbed to gravity falling completely over in 1931. It remained in a horizontal position until 1934 when it was finally re-erected upright. A discovery was also made of a stone lined burial cist beneath it confirming the stone's purpose. The cist however proved to be empty.
When we visited it was a race day so we had no problem getting into the racecourse grounds. I'm not sure that there would be access at other times as the gate would be closed although the perimeter wall and fence are not high on the right hand side of the gate pillars.
The field in which the stone lies can be accessed from a narrow track that runs parallel to the main road outside and there are cows wandering around the field but we didn't spot any sign of a bull, so there was no problem getting up close to the stone. A small fence has been placed around the base probably as protection which slightly detracts from the overall view of the stone. There is also an OPW information sign. The longstone is slightly similar to it's sister stone "The Craddockstown West Stone" which stands in a farmer's crop field opposite the other Punchestown entry gate a short distance in a Westerly direction up the road. We visited this previously (see earlier post here).
Unlike the Craddockstown stone which leans at an angle this Longstone has been re-placed upright. Whether or not both were originally placed at a slight angle is still a bit of a mystery but nonetheless they are quite imposing features especially when you stand directly beneath them.
To find the Longstone take the R411 South from Naas until you reach a crossroads with the L2023 and a sign pointing towards Punchestown. Turn left here and drive for approx 800m past the first entrance to Punchestown racecourse on your right until you reach the second entrance. If the gate is open you can park inside, if not just park outside at the roadside. Once inside the gate walk straight on for approx 40m and you will see a track to your left. Follow the track and you will spot the stone in the field on your left. Just look for a gap in the hedge and you can access it over a low fence. I am not sure how private this land is but we saw no prohibitive signs on our visit.
Posted by Castlehunter at 20:13 No comments: