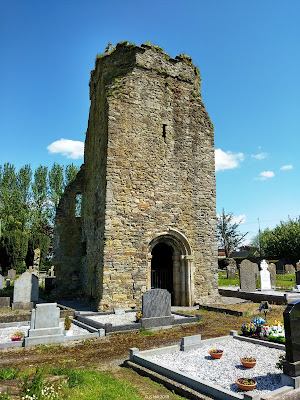 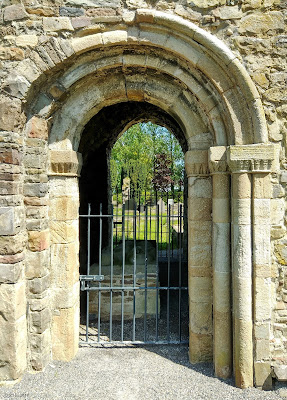 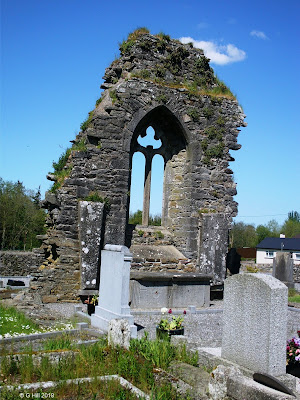 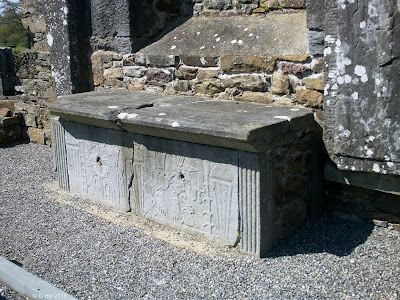 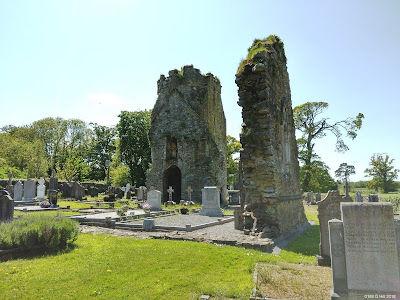 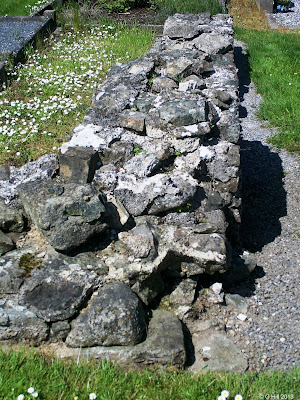 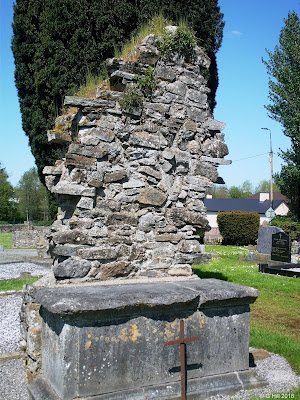 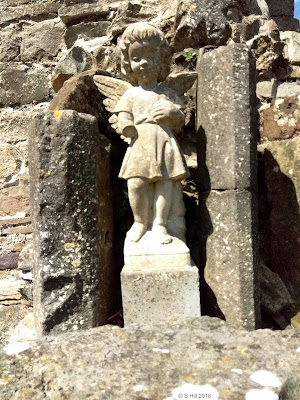 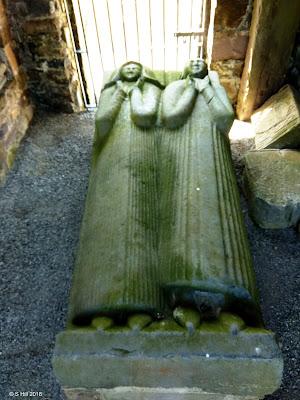 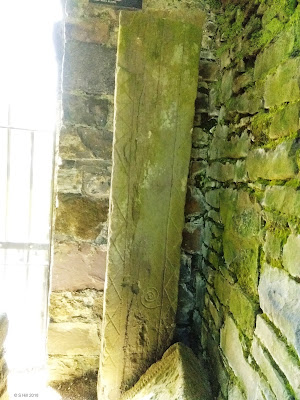 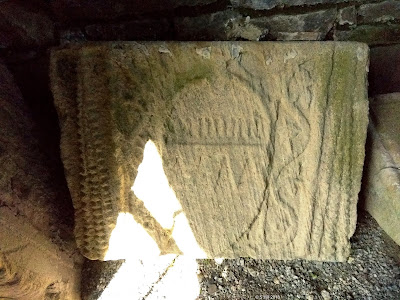 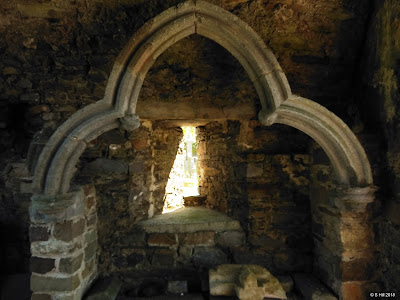 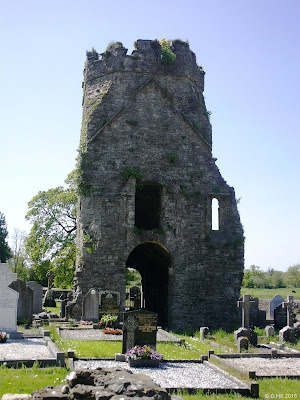 We found this very interesting ruin on the same day we visited Aghaviller (see earlier post here) and Old Sheepstown church (see post here). All three sites were very close to each other.
The ruins at Knocktopher are all that remain of the medieval parish church built on the lands belonging to the Canons Regular of St. Augustine.. What is extant today consists of a 13th century tower with a Romanesque doorway, a portion of the North wall showcasing a fine 15th century window, a few parts at foundation level and one tall shard with a box tomb beneath which may be part of the former East wall. The church suffered closure under the dissolution in 1542 and most of it I believe was demolished in the 19th century.
The ruins are now surrounded by a modern an very well kept cemetery. Judging by the scattered remains it must have been a large enough building. the Romanesque doorway in the tower is gated and the vaulted archway beyond contains a 14th century double effigy tomb which doesn't appear to indicate if the internees were persons of note. The archway has also become a sort of storeroom for various stone artifacts some with decorative carvings upon them. We were pleasantly surprised to find the gate unlocked so we could get in and have a closer look. I would suggest if visiting try to also take in the other two sites mentioned earlier.
To find the ruins take the M9 motorway and exit at junction 10. Take the R699 heading East and drive for approx 1.3KM and as you pass through the small village of Knocktopher the road bends to the right. Continue on down this road for approx 250m and you will find the ruins on your right hand side. You can park safely at the gate.
Posted by Castlehunter at 16:28 2 comments: 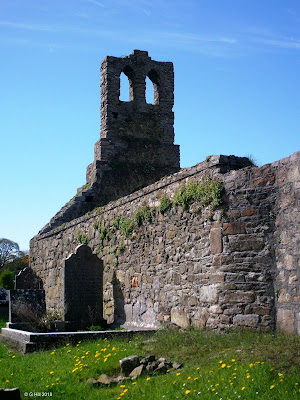 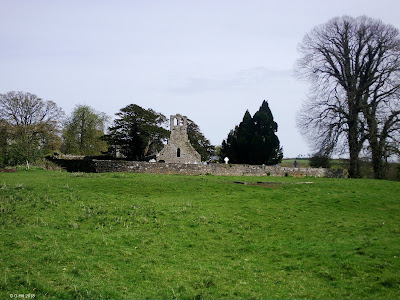 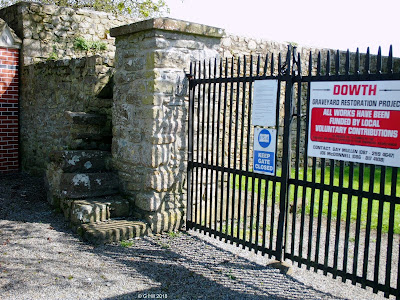 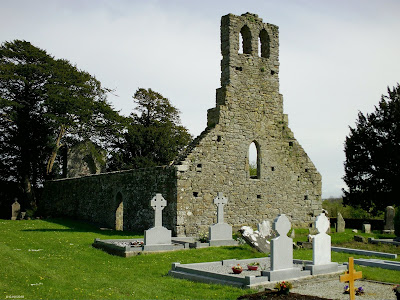 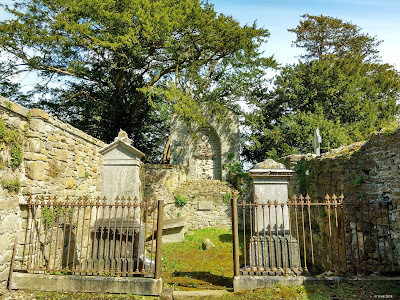 Above Image & Below Image: The interior and East gable 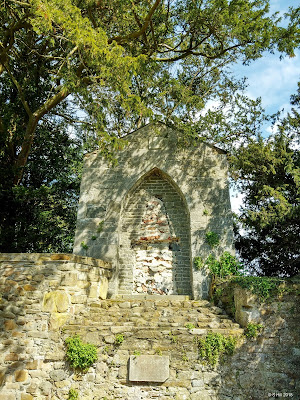 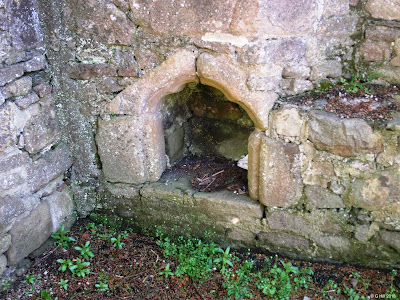 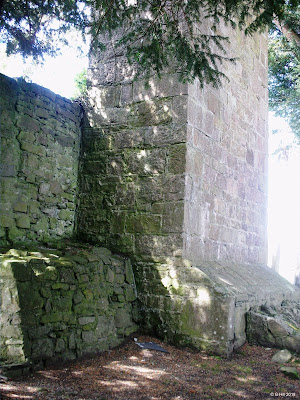 Above Image: Exterior of East gable 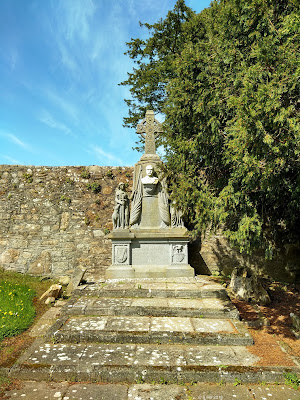 Above Image & 2 Images Below: The O'Reilly monument 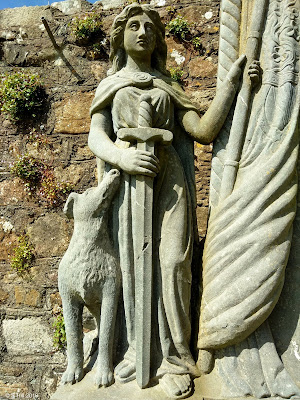 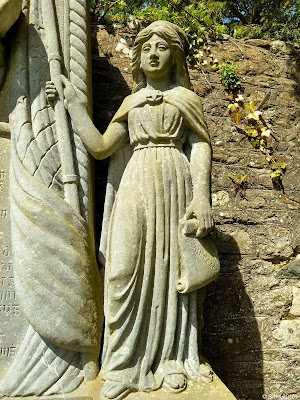 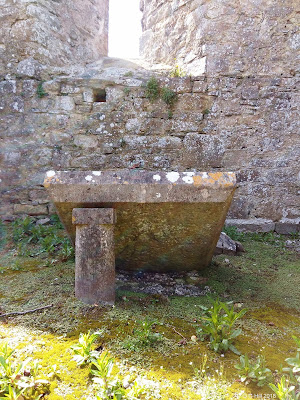 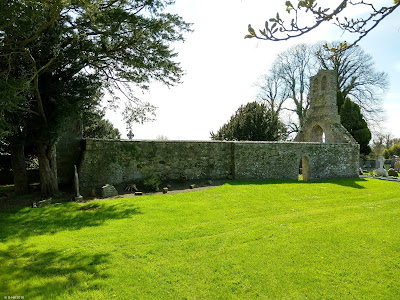 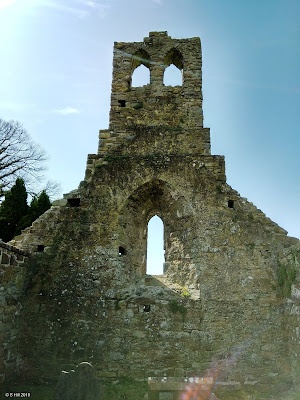 Above Image: The West gable and double belfry


Situated a short distance from the megalithic tomb of Dowth this often named Dowth abbey is actually a former parish church which was constructed in the late 14th century. It is thought to incorporate some portions of an earlier church on the site. The extant ruins consist of a nave and chancel with a double belfry on the extended Western tower gable.
It was built next to the estate of the Netterville family and fell into ruin due to extensive damage during the rebellion of 1641. The grounds in subsequent centuries have been used as a burial ground. One of the more noted features here is that of a memorial for John Boyle O'Reilly, an Irish patriot who had been transported to Australia in 1868 and managed to escape to the United States where in Boston he made a successful career as a writer and journalist. He is buried in Holyhood cemetery in Massachusetts. A large and impressive memorial now stands in this cemetery at Dowth, his place of birth, Behind the monument on the side with the effigy of a dog are the faint remains of a Sheela-na-gig set in the wall.
When visiting I was impressed that for such an ancient church that all the walls were still standing although some repairs appear to have been made. It is also quite a long structure and has two doorways in the nave on opposite walls.
Nearby as mentioned is the ancient tomb of Dowth which I will cover in a future post. Ideally you can visit both it and the church in the same trip.
To find the ruins take the M1 heading North and at junction 10 just after the Boyne bridge take the exit for the N51 to Navan. Drive approx 1.8KM until you pass the gates of Townley Hall on your right. Take the next left hand turn onto the L1607. Drive down this road for about 1.8KM until you have passed two sharp bends to the right. Continue on for another 1KM and you will see an entrance on the left to Netterville house with a sign pointing to the O'Reilly memorial. Drive up the narrow avenue and you will find limited parking space at the church gate.

P.S. I have recently added more photos of Maynooth Castle to the earlier post. It can be found here
Posted by Castlehunter at 17:21 No comments: