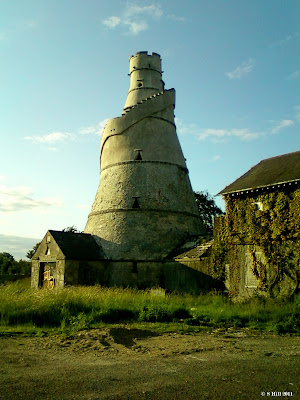 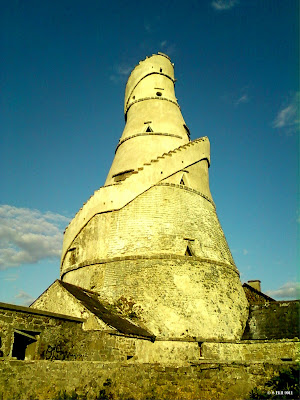 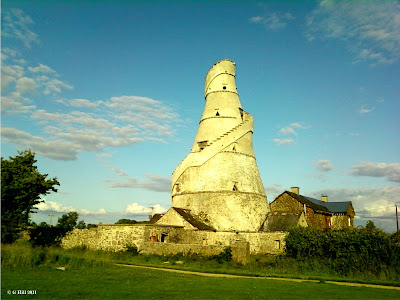 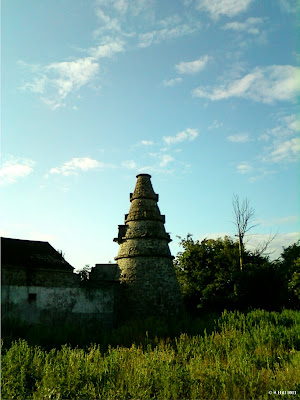 Above Image: One of the two Dovecote Towers. 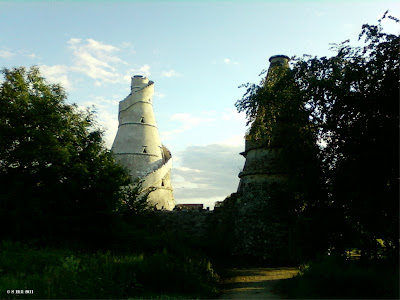 Above Image: The Wonderful Barn and in the foreground
the second Dovecote Tower 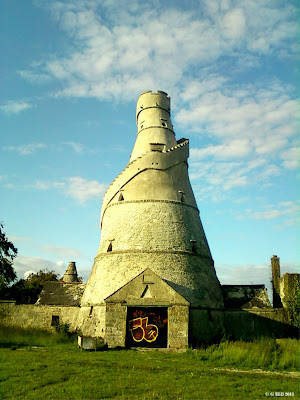 Situated on the Eastern end of the Castletown Estate in Leixlip Co Kildare is the most unusual "Wonderful Barn" It was commissioned in 1743 by the widow of the famed Speaker Conolly who himself had built  The Hellfire Club on Montpelier Hill in Dublin. Like it's imitator, Hall's Barn in Churchtown Co Dublin, the Wonderful Barn was designed as relief work for locals who had been hit hard by the famine that had struck the land in the early 1740's. It is a tall conical structure with seven floors (some used as living quarters for servants) and central holes in the floors for use as a Granary Barn. The fortified aspect of the building lends credence to the tale that it was to protect the grain from attacks by the Wicklow Clans of the O'Tooles And O'Byrnes.
The windows in the Barn are triangular in shape and there is a stone spiral staircase consisting of 94 steps on the outside. On either side of the central Barn are two smaller dovecote towers and a surrounding wall. Adjacent to the Barn is the boarded up derelict "Barnhall House".
We took a trip to see the Barn on a summer's evening in June armed only with the knowledge that it was on a private estate but that the OPW had taken over the Eastern end of the lands and a public right of way for pedestrians was allowed. The land is surrounded by local housing estates and sometime in the past anti-social behaviour had occurred at the Barn and had led to a fire which threatened to destroy this amazing site. However this all seems to have calmed down and the land adjacent to the Barn on the esatate is currently used by some locals as vegetable allotments. A study of the area on Google Maps (Streetview) uncovered what looked like a gate on the Celbridge Road which bordered the land on which the Barn stood, so we took a chance and went hunting. Indeed, we found that this gate used by the allotment owners allows pedestrian access and a short 5 minute walk led us straight to our target.
The grass is quite long around the Barn area and there was a sign threatening that the Garda will be notified if anyone tries to enter or climb up on the Barn. Ironically the sign was lying flat in the long grass and rusting. That was good enough for us to assume that we can at least get up close, so we did.
It truly is an amazing building and it puzzles us that so little interest is shown. As in most visits to ruins we were the only ones there, so we took our time and plenty of photos.
To find the Barn we found the best route to take was the M4 from Dublin and then exit at Junction 6. Take the 3rd exit from the roundabout and you will come upon another roundabout indicating Kilmacredock or Easton. Take the right hand turn for Easton and travel down this road until you reach the crossroads with the R148. Turn right here onto Station Rd, past the Garda station on your left, then take the next right turn on to Celbridge Rd. Continue on down this road until you see Elton Court on your right. The gate into the Castletown lands is just past this road on your right hand side among a hedgerow. There are areas on the opposite side of the road where you can park easily enough.
Posted by Castlehunter at 14:44