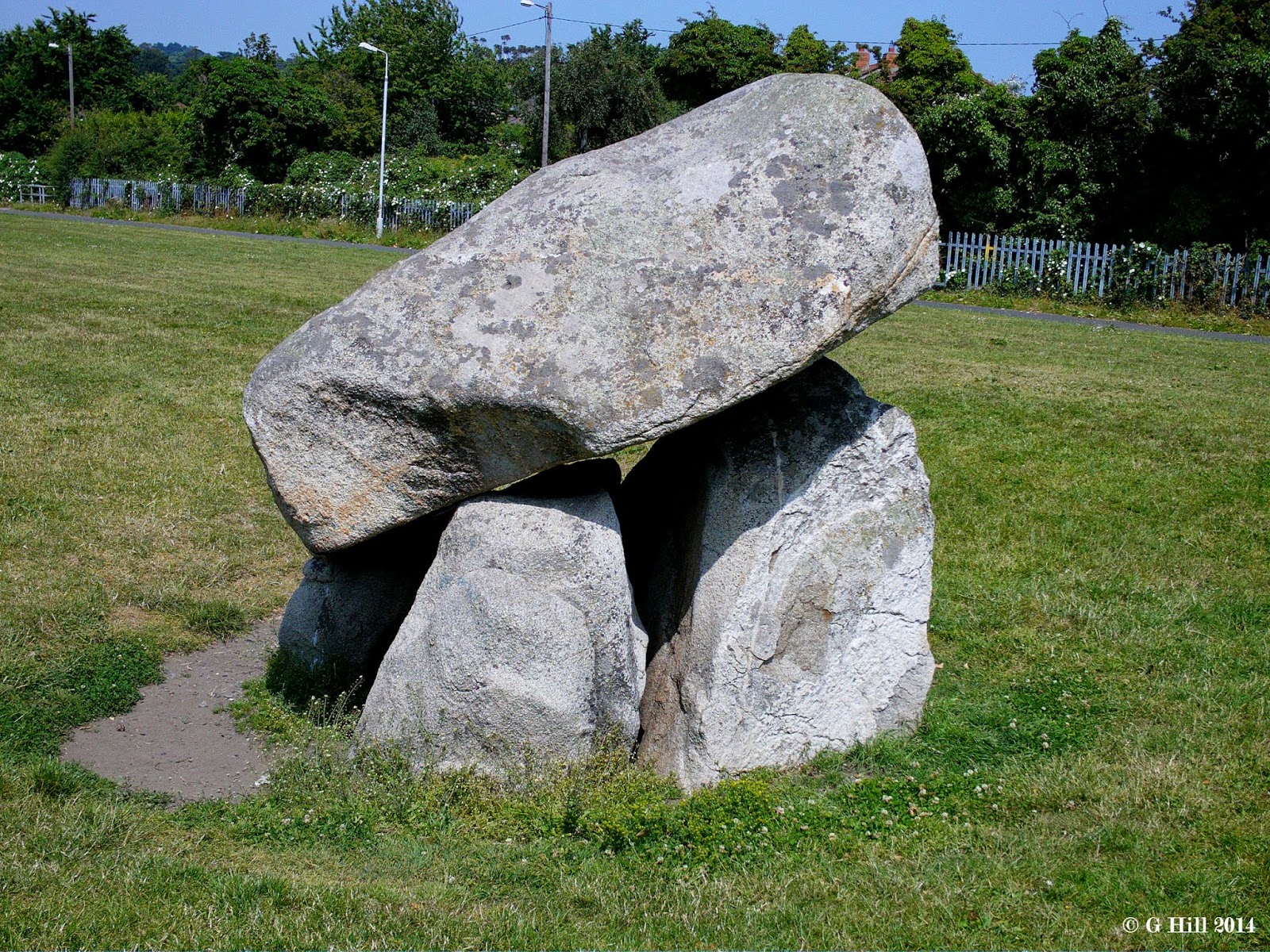 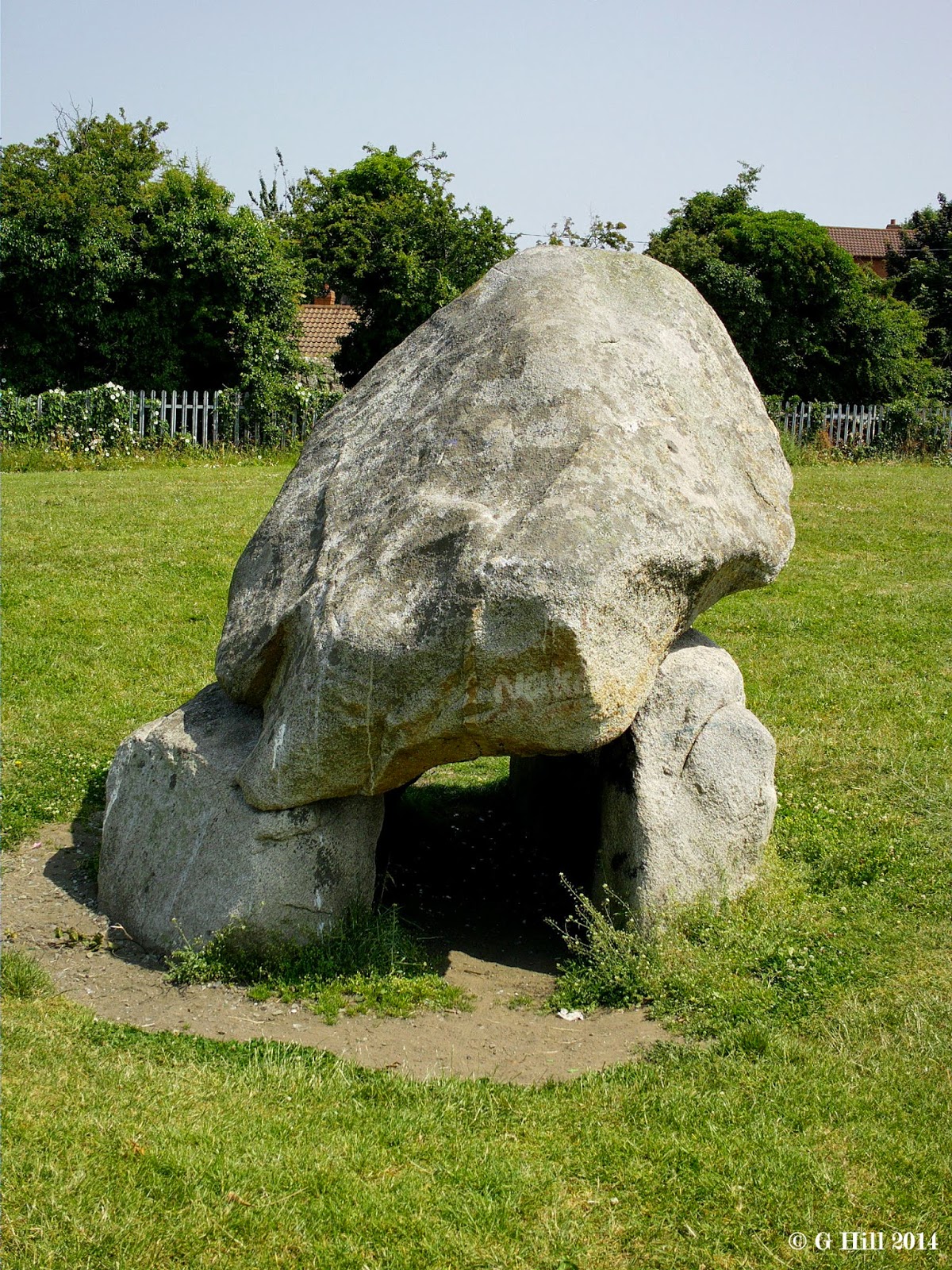 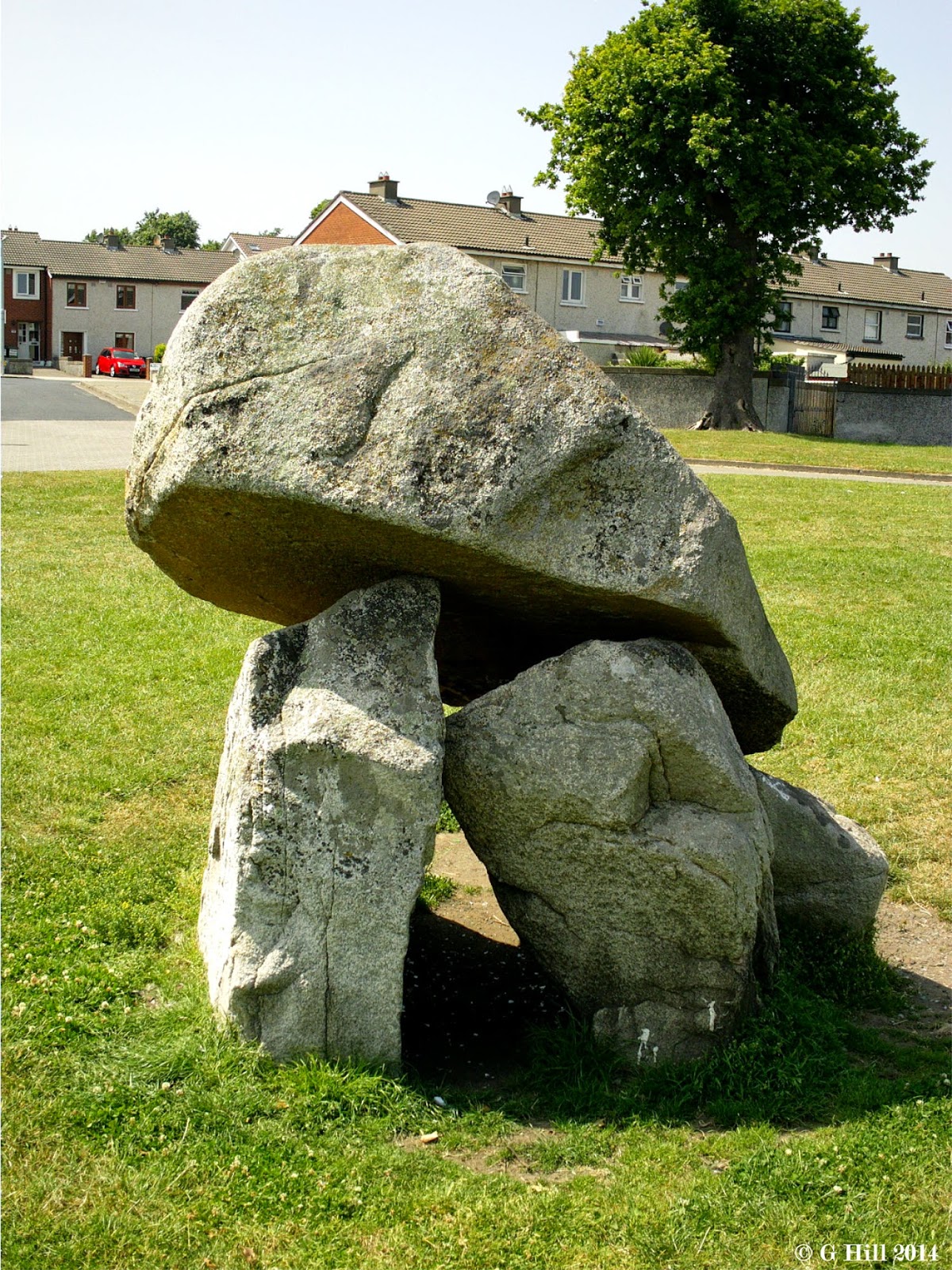 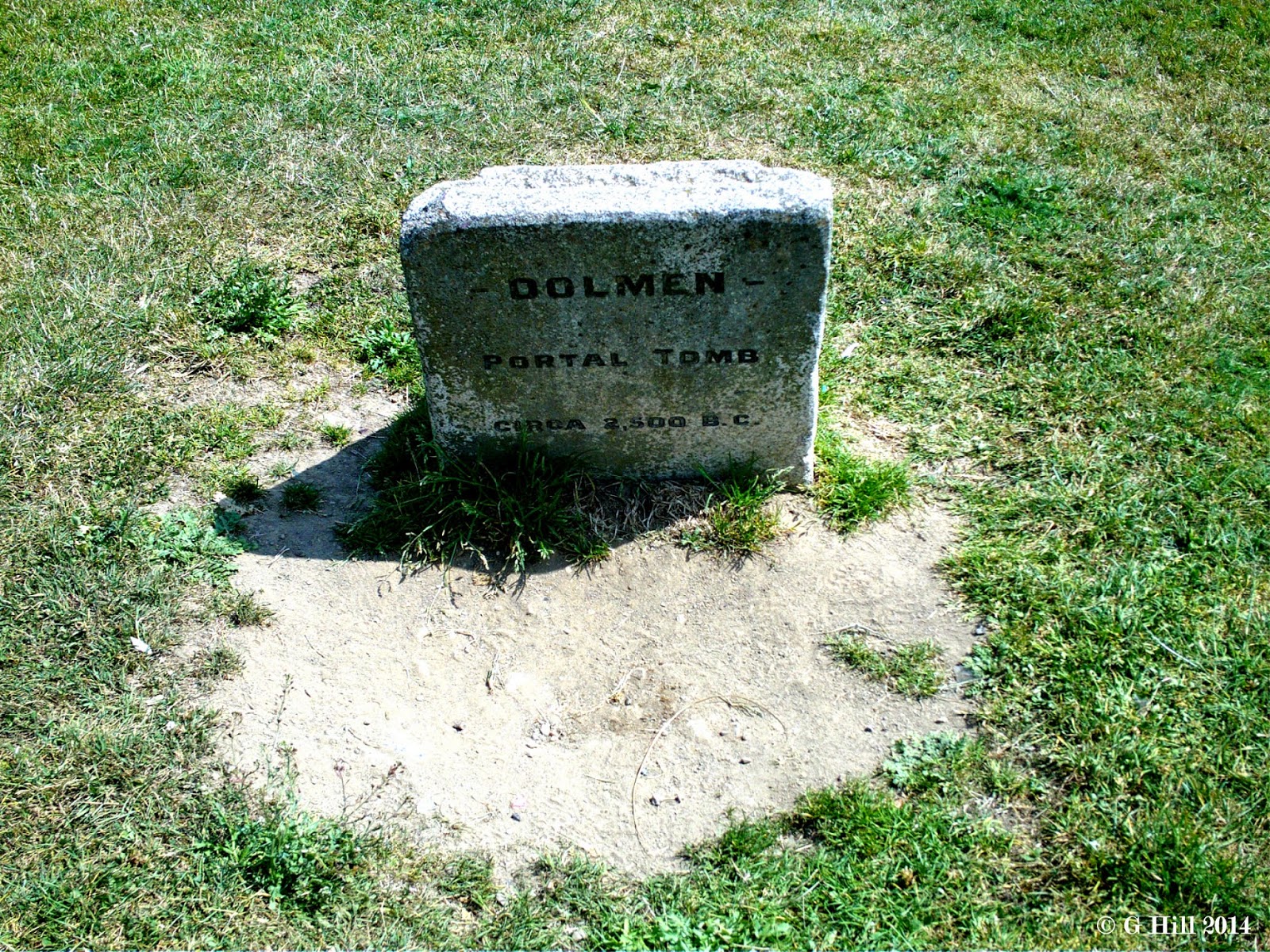 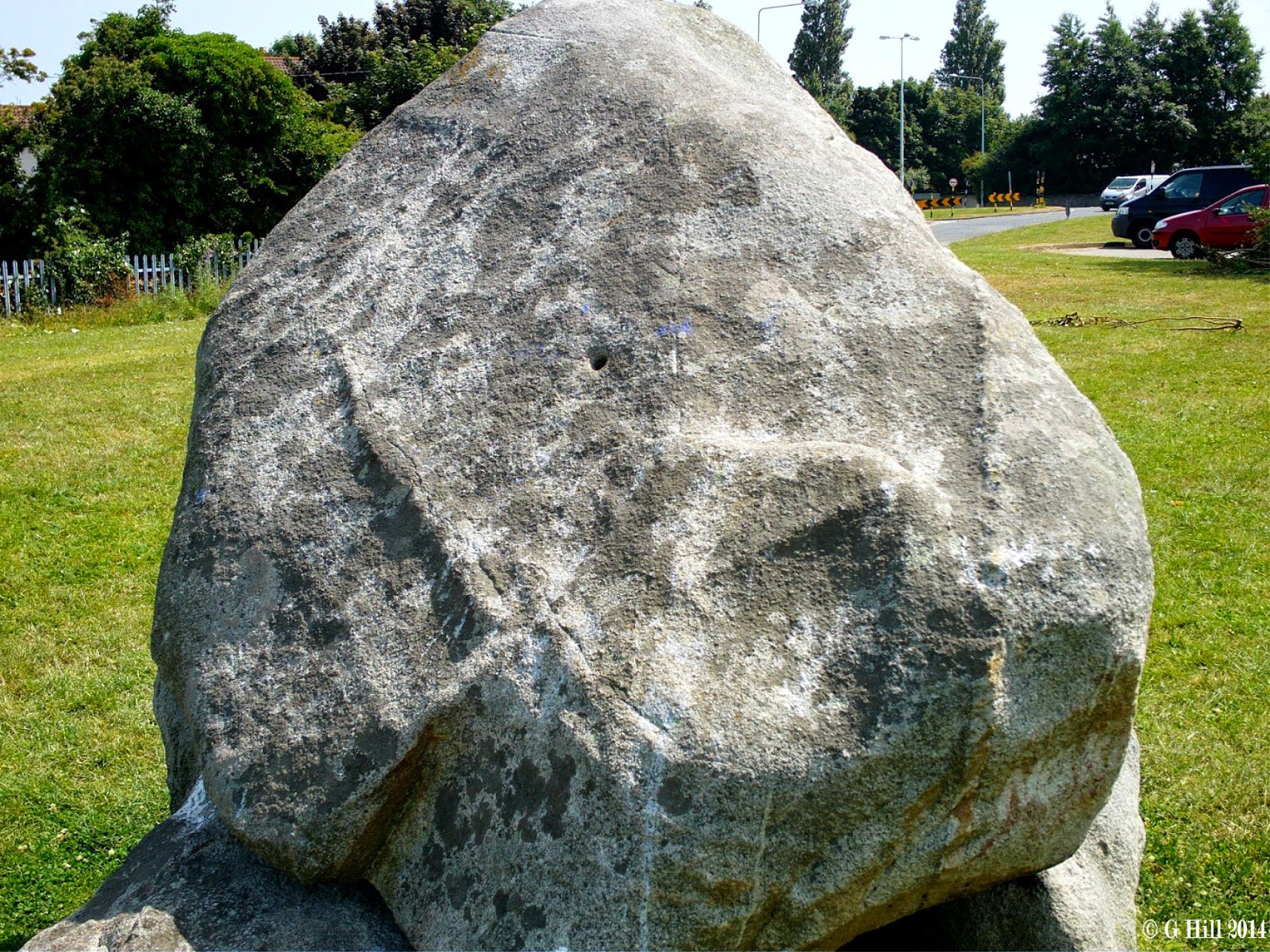 Above Image: Close-up of the capstone 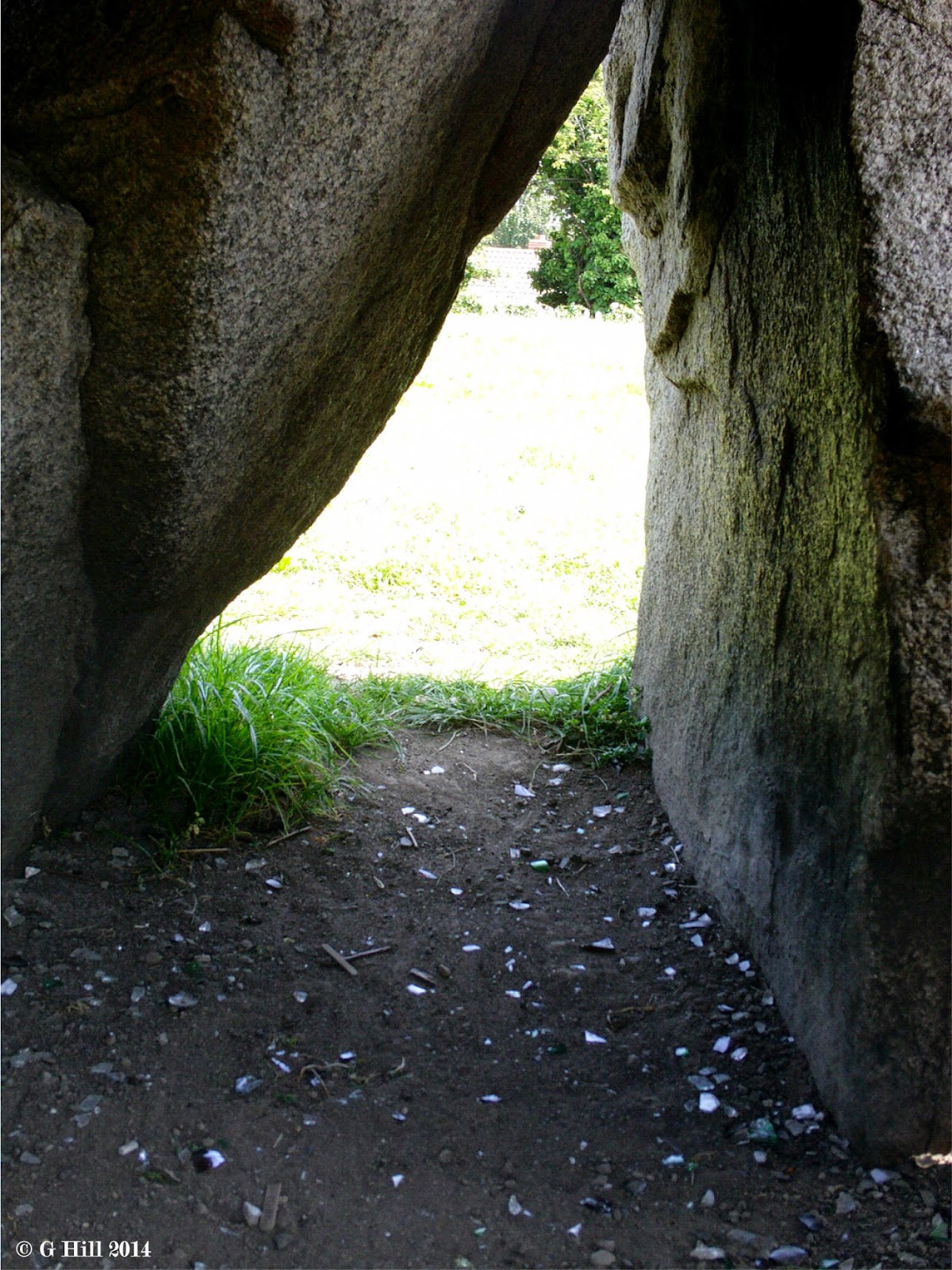 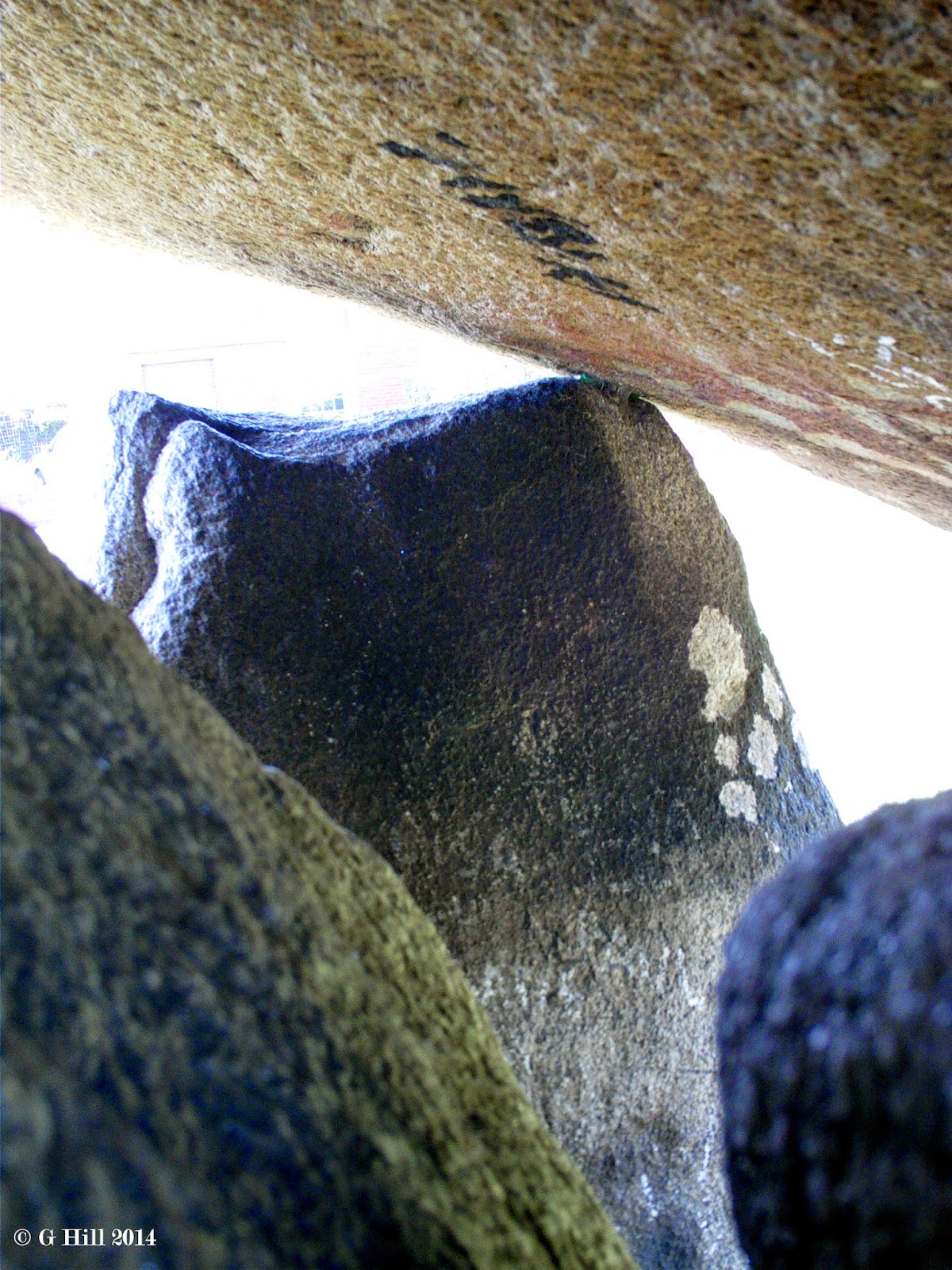 Above Image: Amazing that this portal stone is only
just tipping the capstone 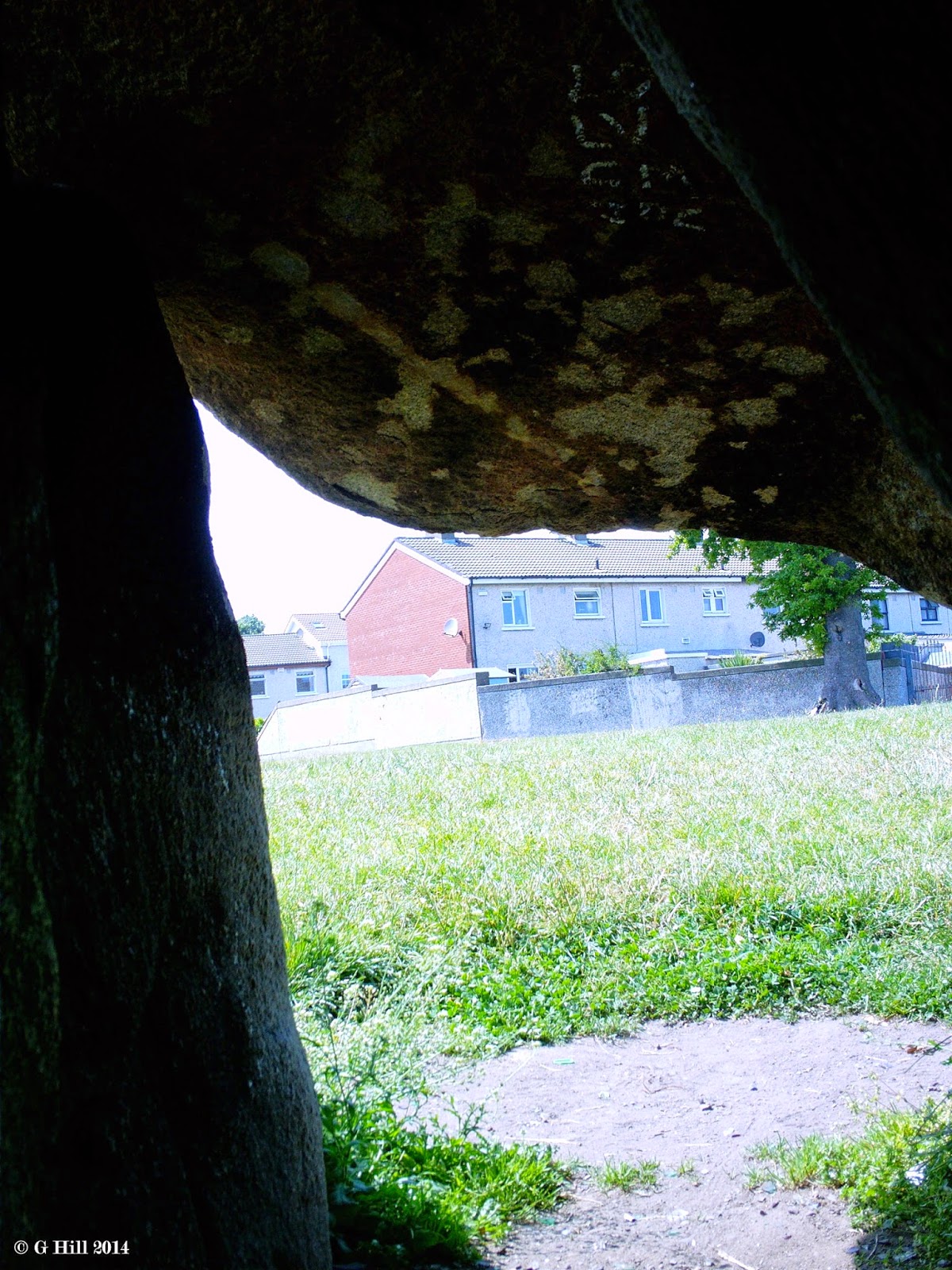 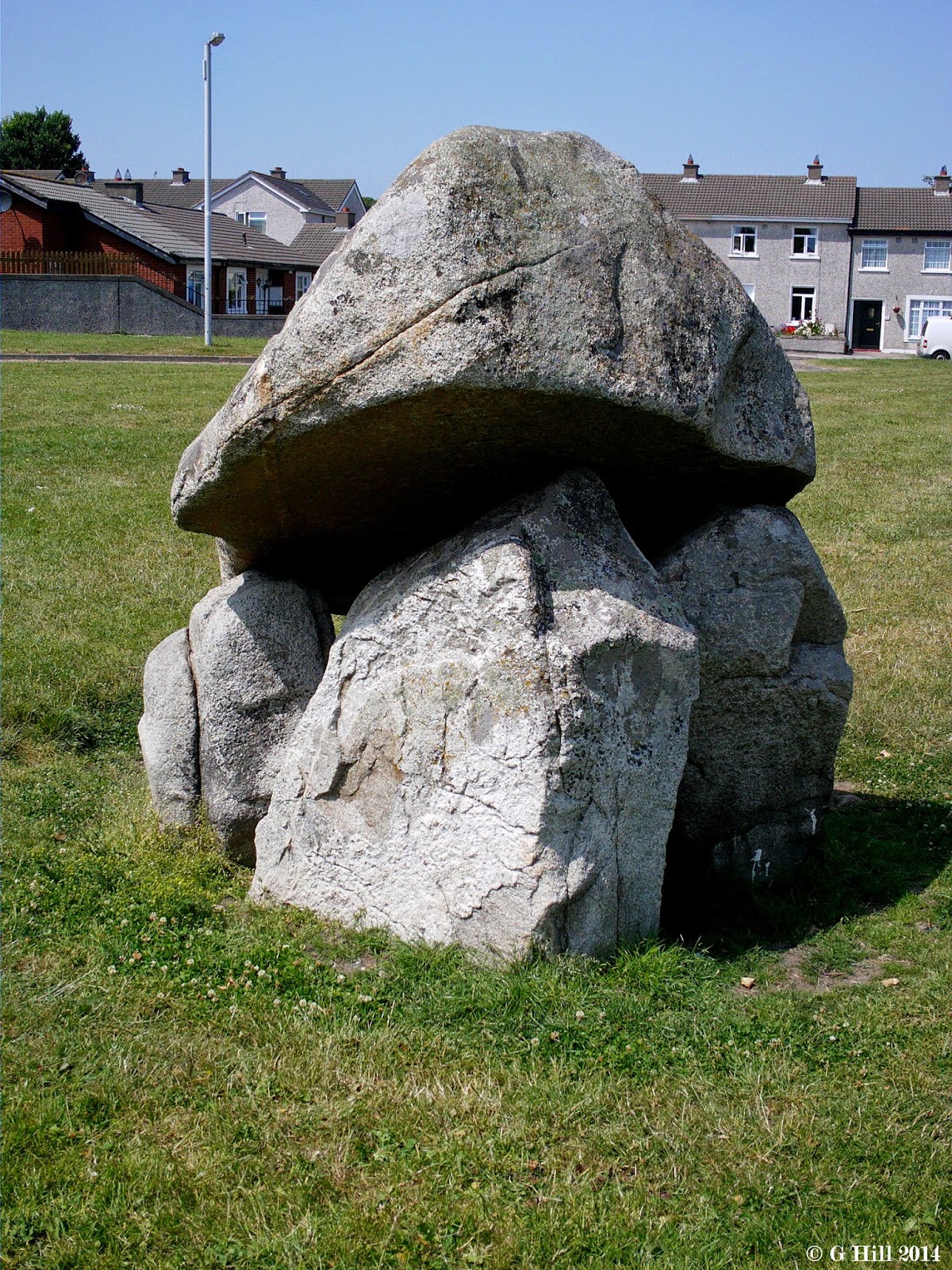 
There are many megalithic portal tombs dotted around the country but this particular Dolmen as with the Brehon's Chair (See earlier post here) is located within the confines of a modern housing estate.
Looking strangely orphaned as it sits alone in the middle of a green area surrounded by housing this rather nice looking example of its kind has amazingly stood here since about 2500BC. Some surrounding stones appear to be missing but it still looks quite solid. The capstone measures approx. 7 feet by 6 feet and is supported by upright portal stones measuring about 4.5 feet in height.
Being located in the vicinity of close human interaction naturally some damage has been done to the Capstone by some uncaring persons in the form of graffiti most of which thankfully has faded. In the portal chamber, which you can actually gain access if you want, more evidence of neglect is to be found in the form of broken glass. Sad to say that this happens to what is in fact a national monument.
Because of its location I found any form of activity around it seemed to draw curious attention especially if you are photographing it. It took 3 visits for me to actually get up close and photograph it without interruption of some kind. A midweek morning was the best time to visit I found. It really is surprising to find such a gem still surviving in such an unusual location so kudos must go to the planners for working around the Dolmen instead of levelling it. A really nice monument then and very easy to access.


To find the Dolmen take the N11 South and just before the Loughlinstown roundabout take the left hand turn onto Commons Road. Drive for approx. 600m until you reach a crossroads with the R119 (Shanganagh Rd). Turn left here and drive until you reach a roundabout. Take the first exit left onto Cromlech Fields and 100m on take the first right hand turn onto Aran Avenue. Drive another 100m and take the next turn right. You will spot the Dolmen in a green area ahead of you. There is a small parking area to the right of it. 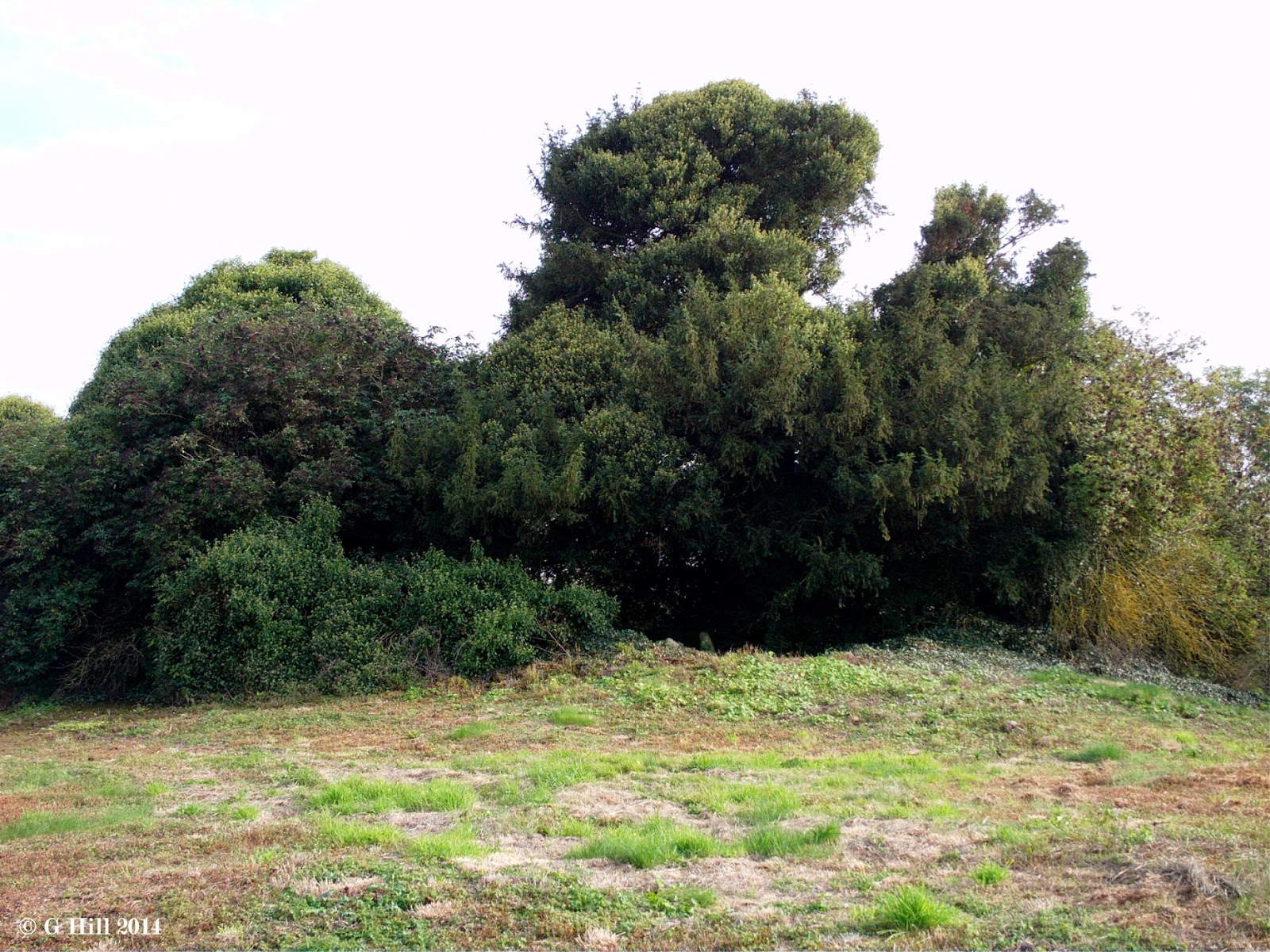 Above Image: When is a Church not a Church? 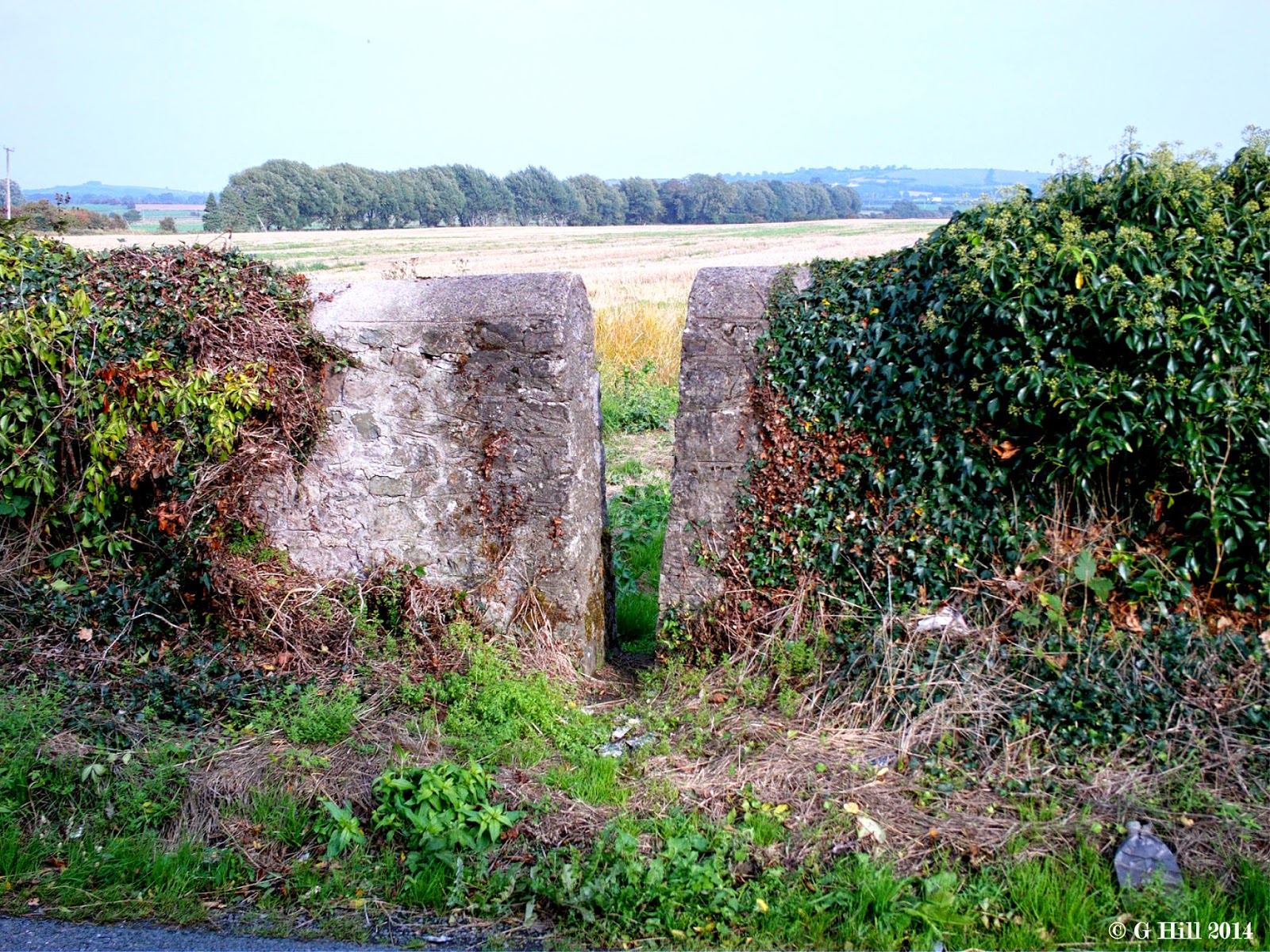 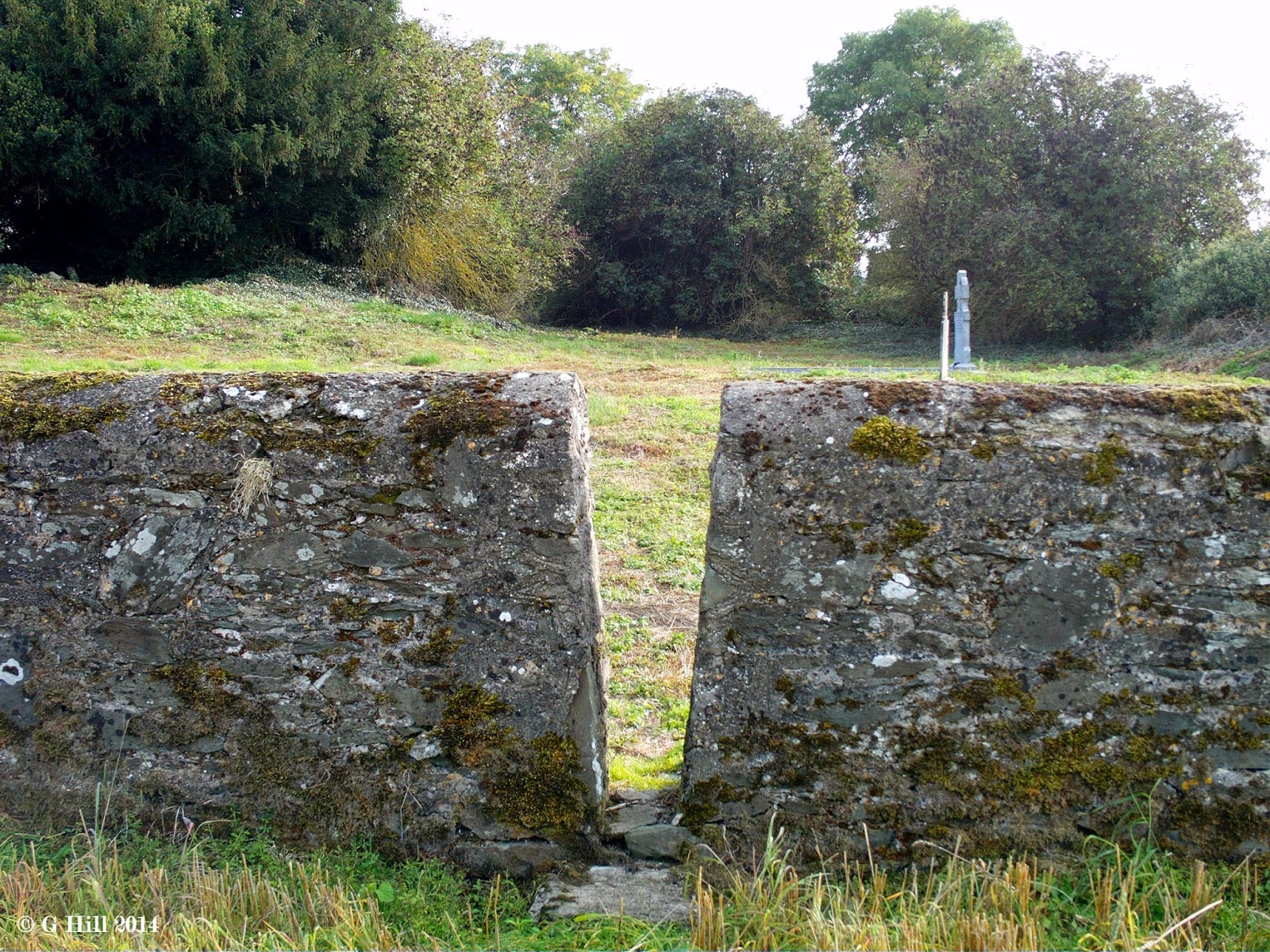 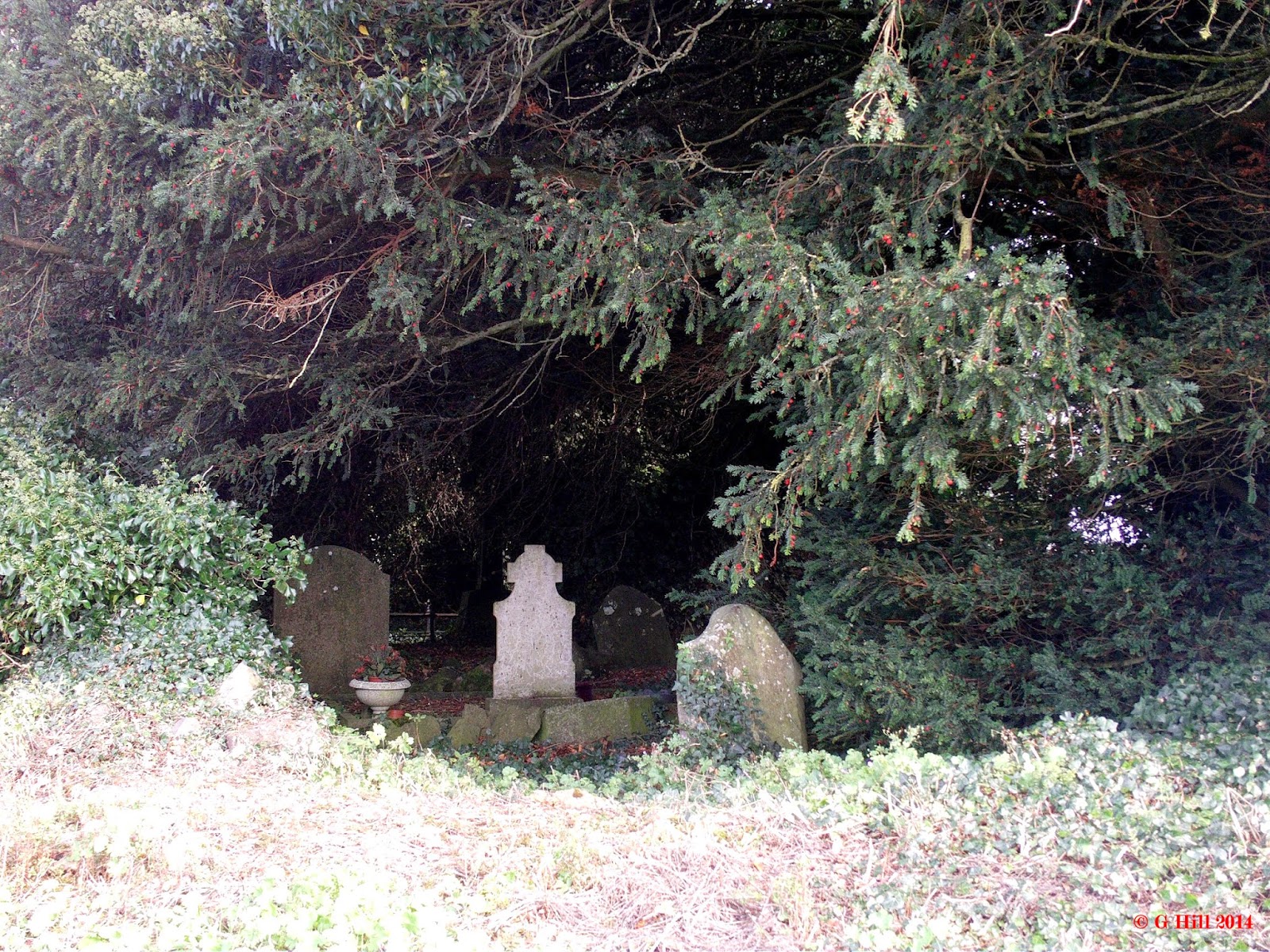 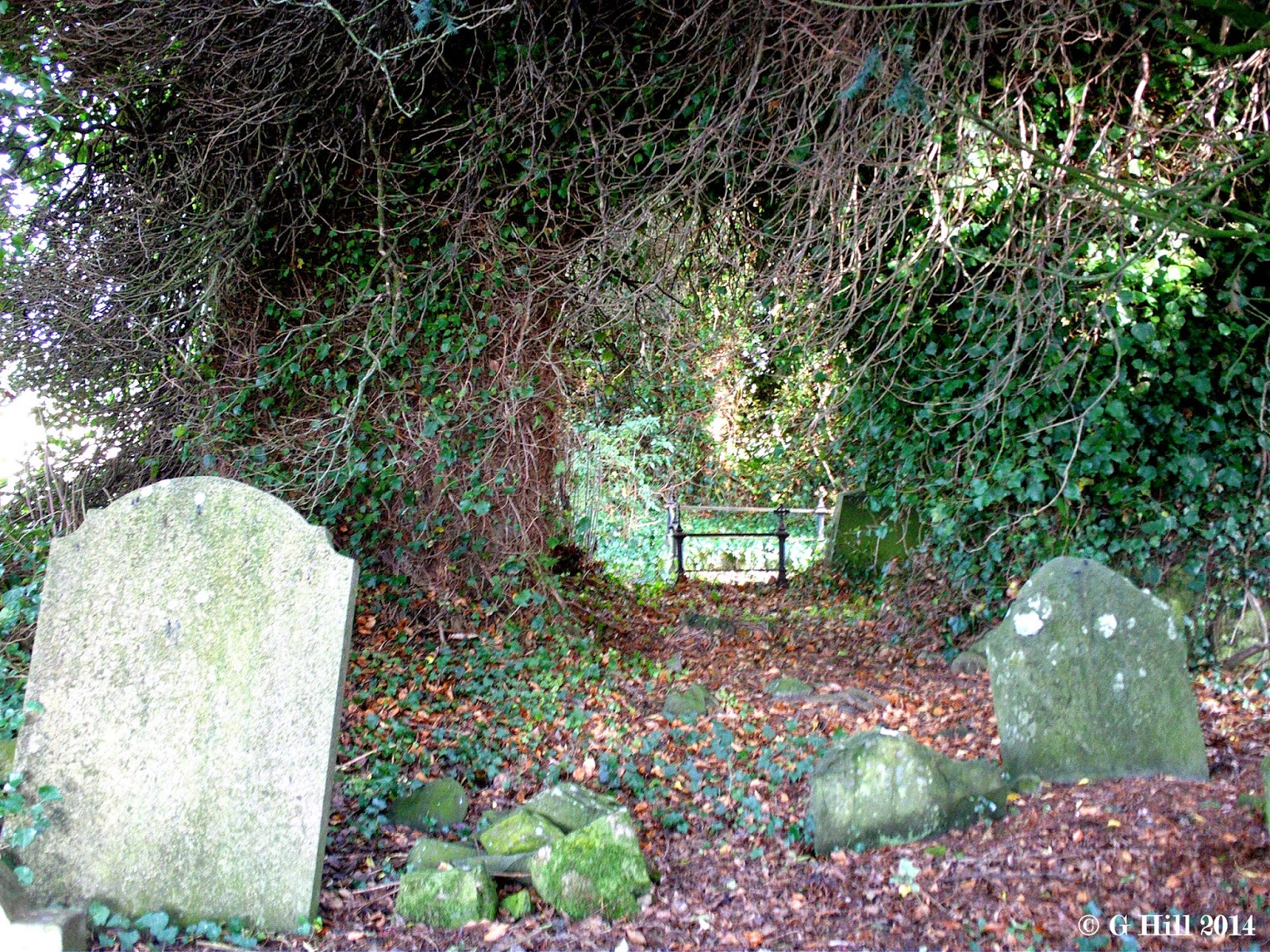 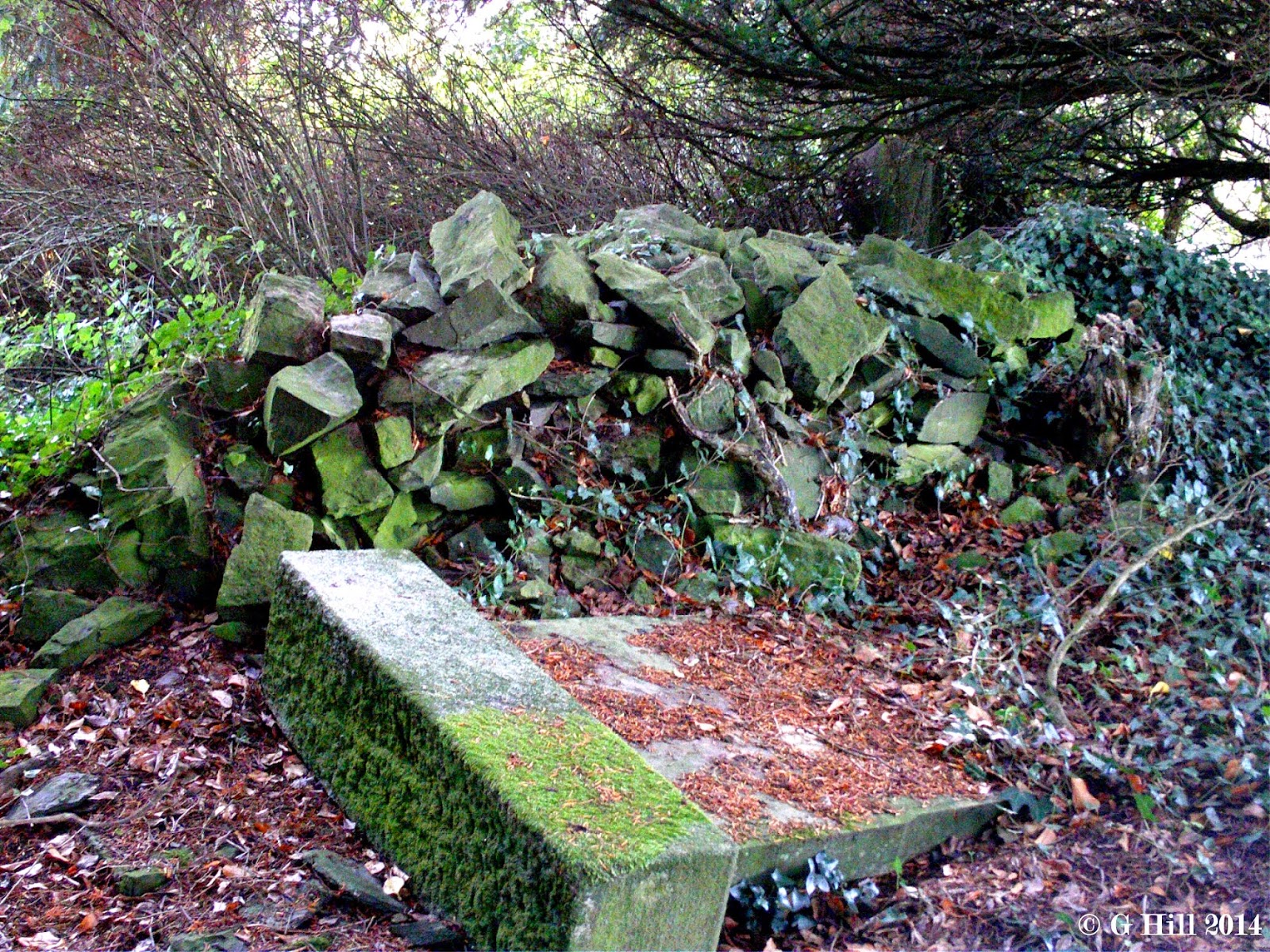 ﻿
﻿
Above Image: The font & broken base
Don’t know what to think of this one! I didn’t anticipate that there would be very much left of this small Church ruin but I wasn’t expecting what was literally an ivy cave
The medieval Church here at Castlefarm was founded by the Canons regular of St Augustine on the
site of an earlier church founded by St Briga in the 5th century. The Canons unlike cloistered monks sought to deliver their ministry and the sacraments to the general public. This particular Church belonging to the order has now been reduced to just the East gable and the divisional wall between what was the nave and chancel. There is supposedly a narrow window in the standing gable although with all the ivy it’s hard to ascertain and that just about sums up the site.
The Church is located in a barley field on a back road near Suncroft in Kildare and a there is a stile in the roadside wall which you could very easily miss driving by. Once over this stile your adventure begins along a dirt track to the circular boundary wall of the graveyard in which the ruins lie. It is thought that stone from a local castle was used to construct this wall in the 19th century. Cut into this wall is another stile, V-shaped and quite narrow put here by the county council and it very nearly done me a mischief trying to squeeze through it.
I stared around the site looking for visible ruins but only a very tall clump of trees and ivy was visible near the centre. I walked towards it and saw that there was what amounted to a hole in the bushes. Entering I discovered I was actually within what was once the nave. I could partially see the East gable at the other end and some visible wall. This site had really gone to ground. There were several grave markers within and also the remains of a font now lying amongst the fallen leaves on the ground with part of its base beside. It is believed that some graves within the enclosure may have been famine graves from the late 1840’s.
The last internment took place here in 1978 so the site seems to have been pretty much forgotten as the state of the ruins would attest. Still I found this an interesting visit if only for the fact that this ancient place is still accessible and there was certainly a feeling of antiquity standing within the confines of the leafy burrow.

To find the ruins take the M9 heading South and at junction 2 take the exit. At the top of the exit ramp turn right onto the R448 for Castledermot. Drive for approx. 11KM until you see a right hand turn signposted for the L4002 to The Curragh. Turn onto this road and drive for approx. 900m until you spot a farmyard entrance with a large shed like structure on you right. The stile to enter the field is in the wall literally just past the shed. Once over the stile follow the track alongside the side of the shed and you will reach the graveyard enclosure. 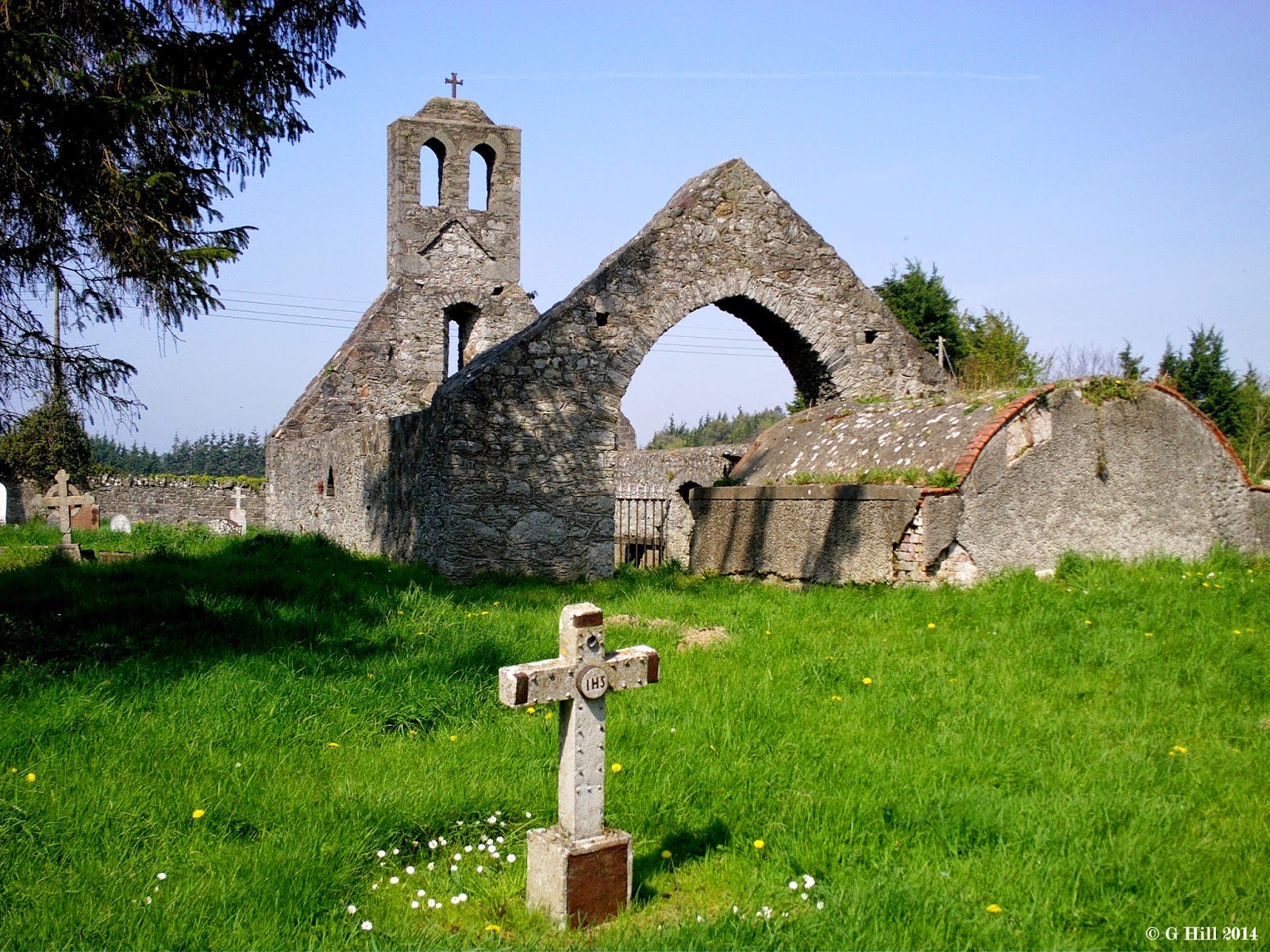 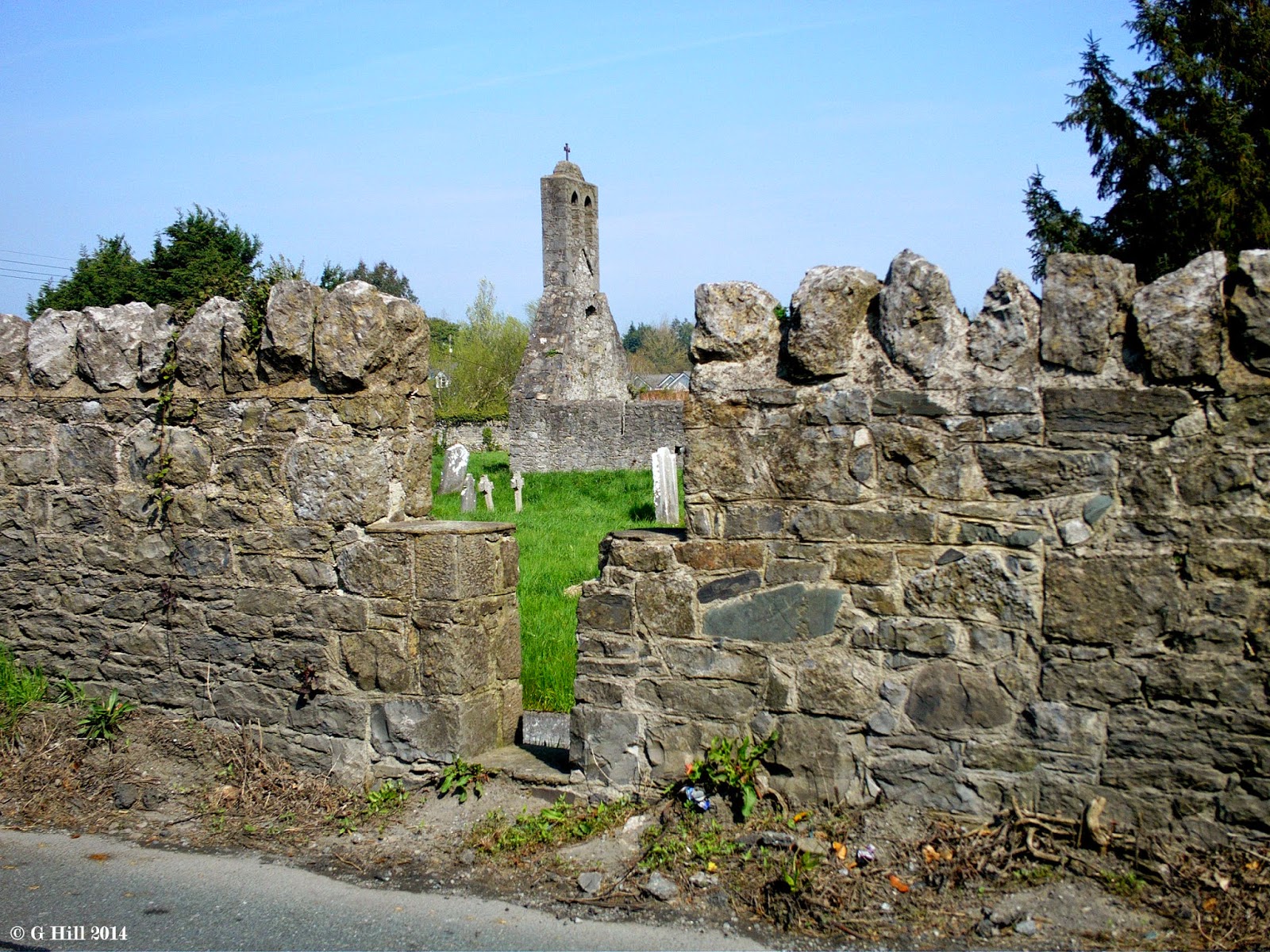 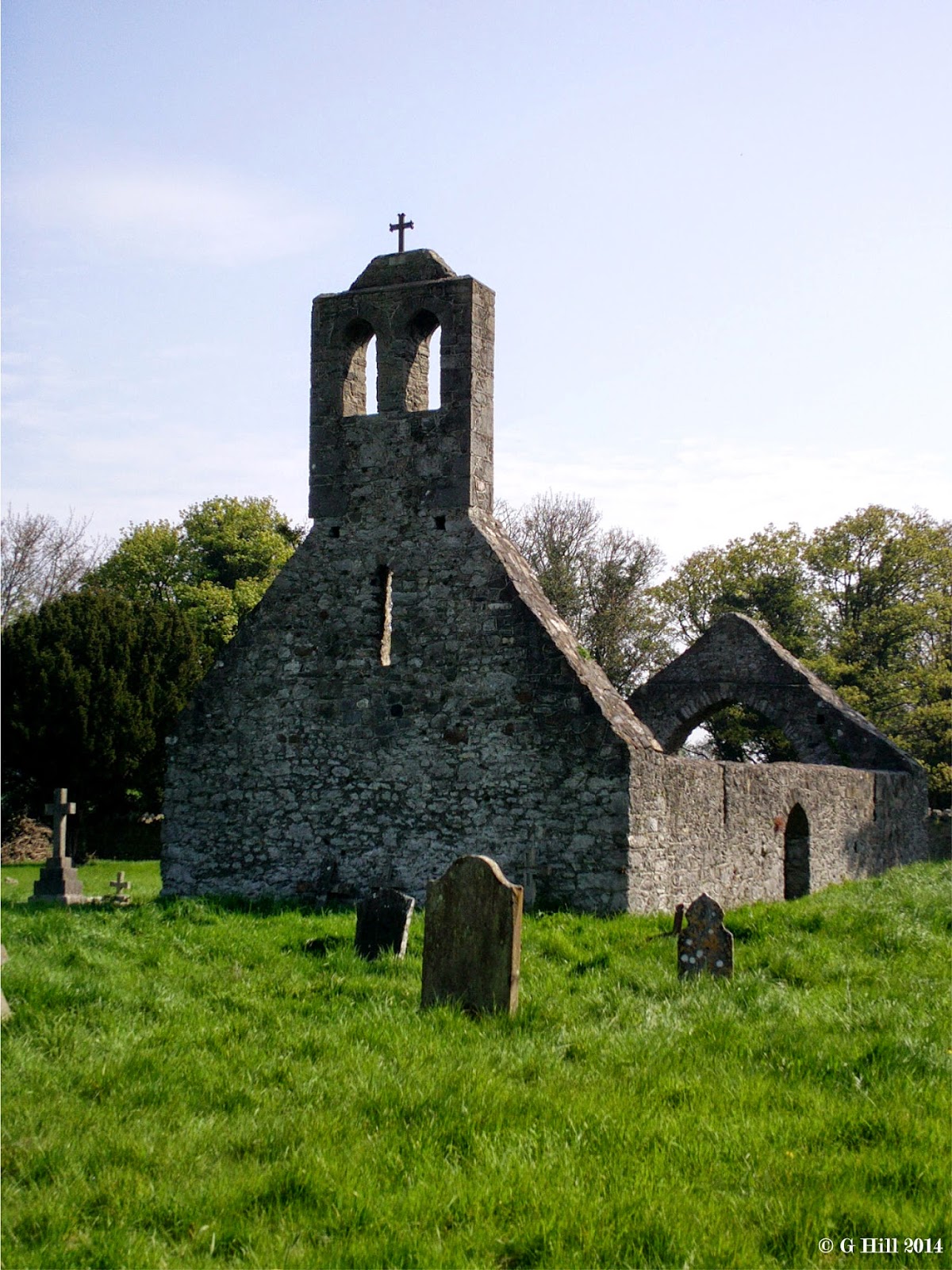 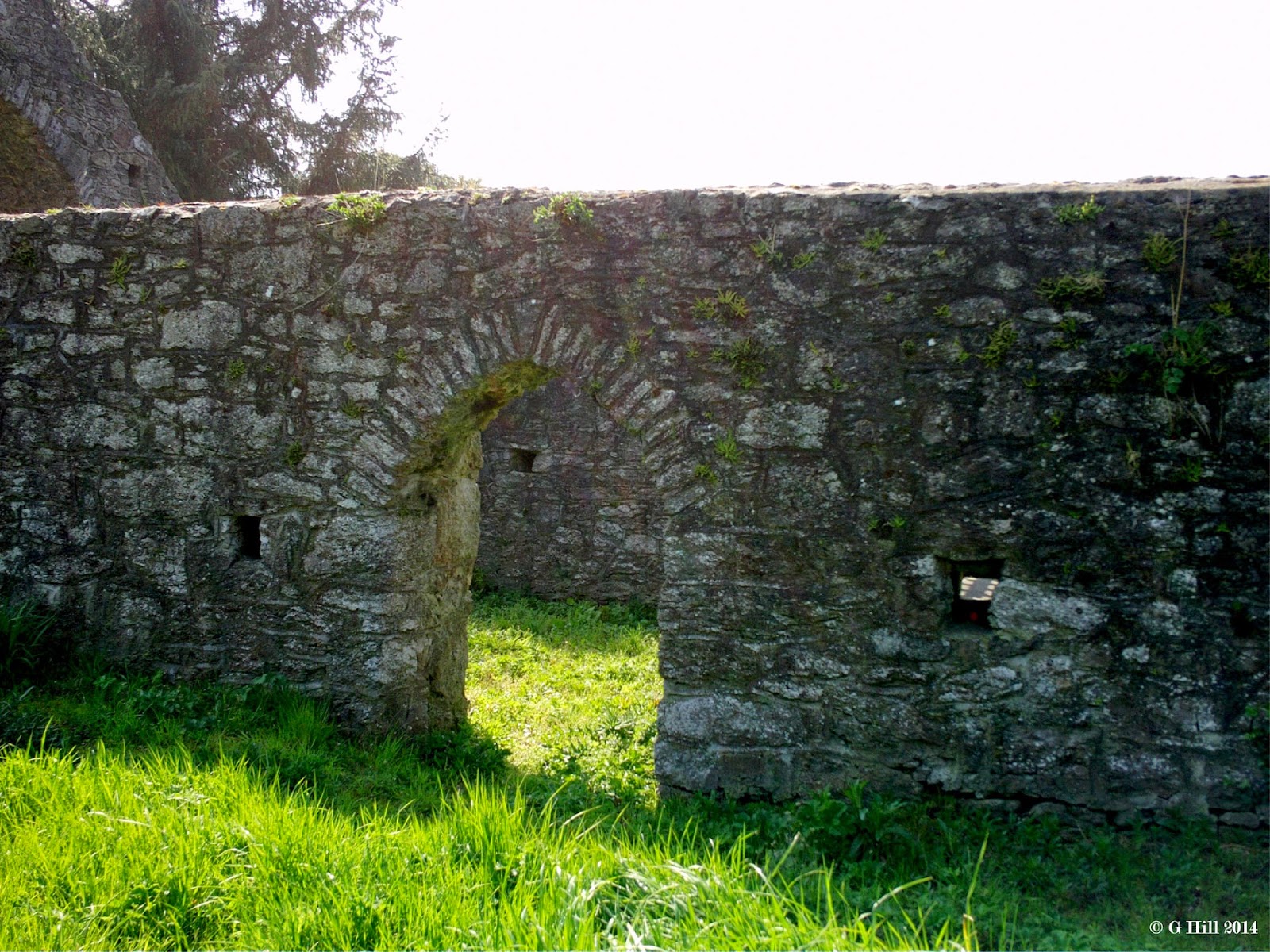 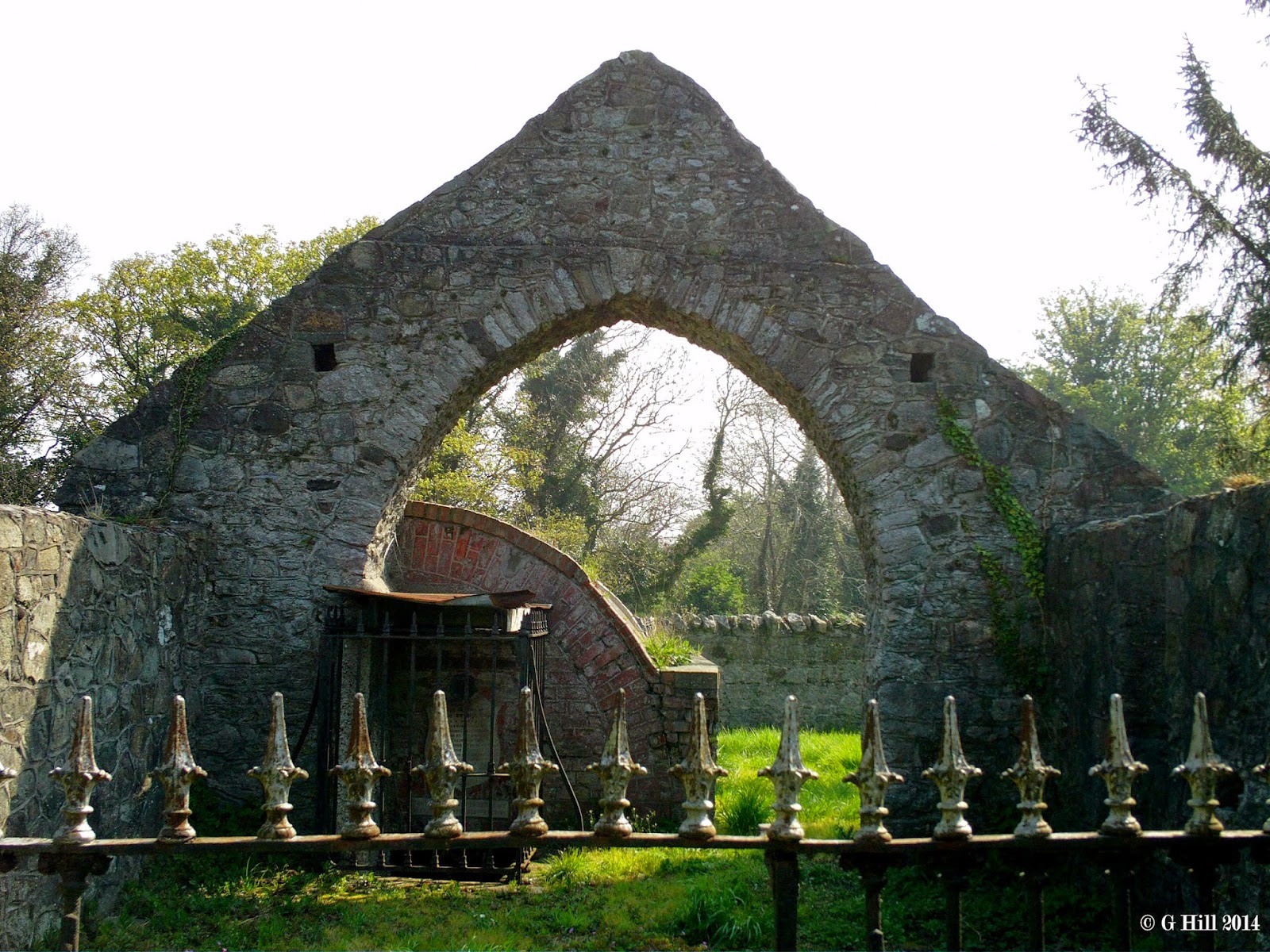 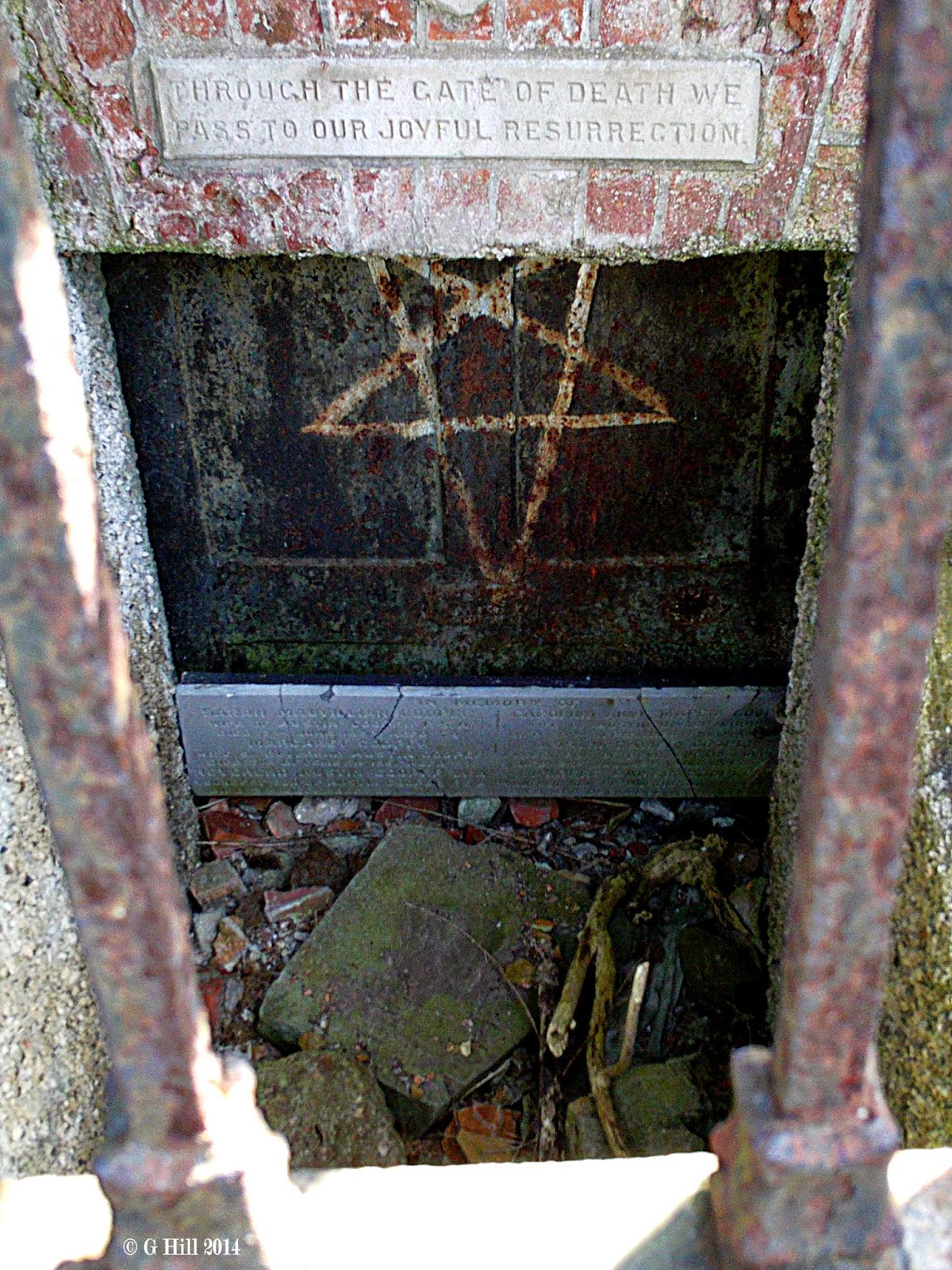 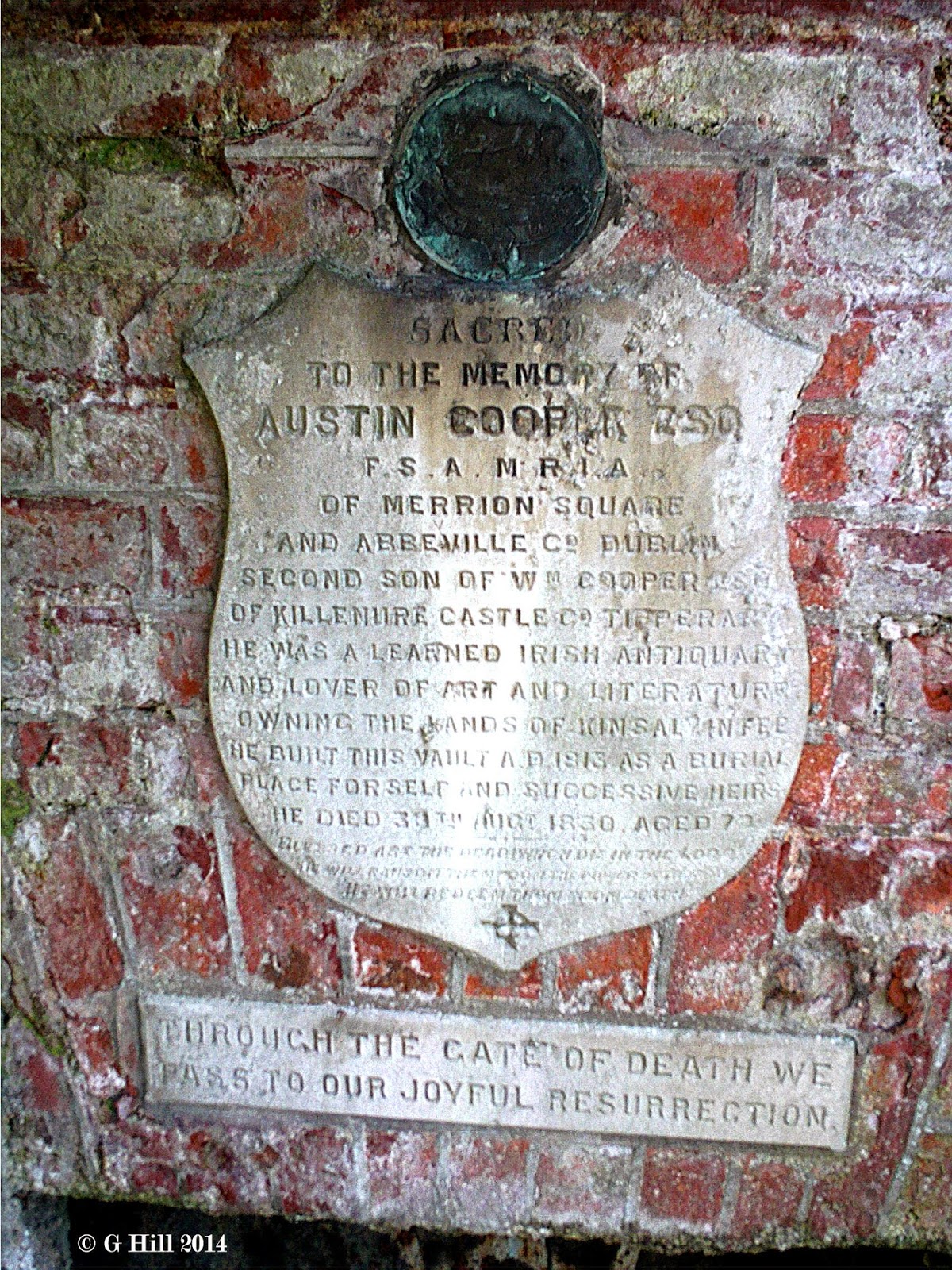 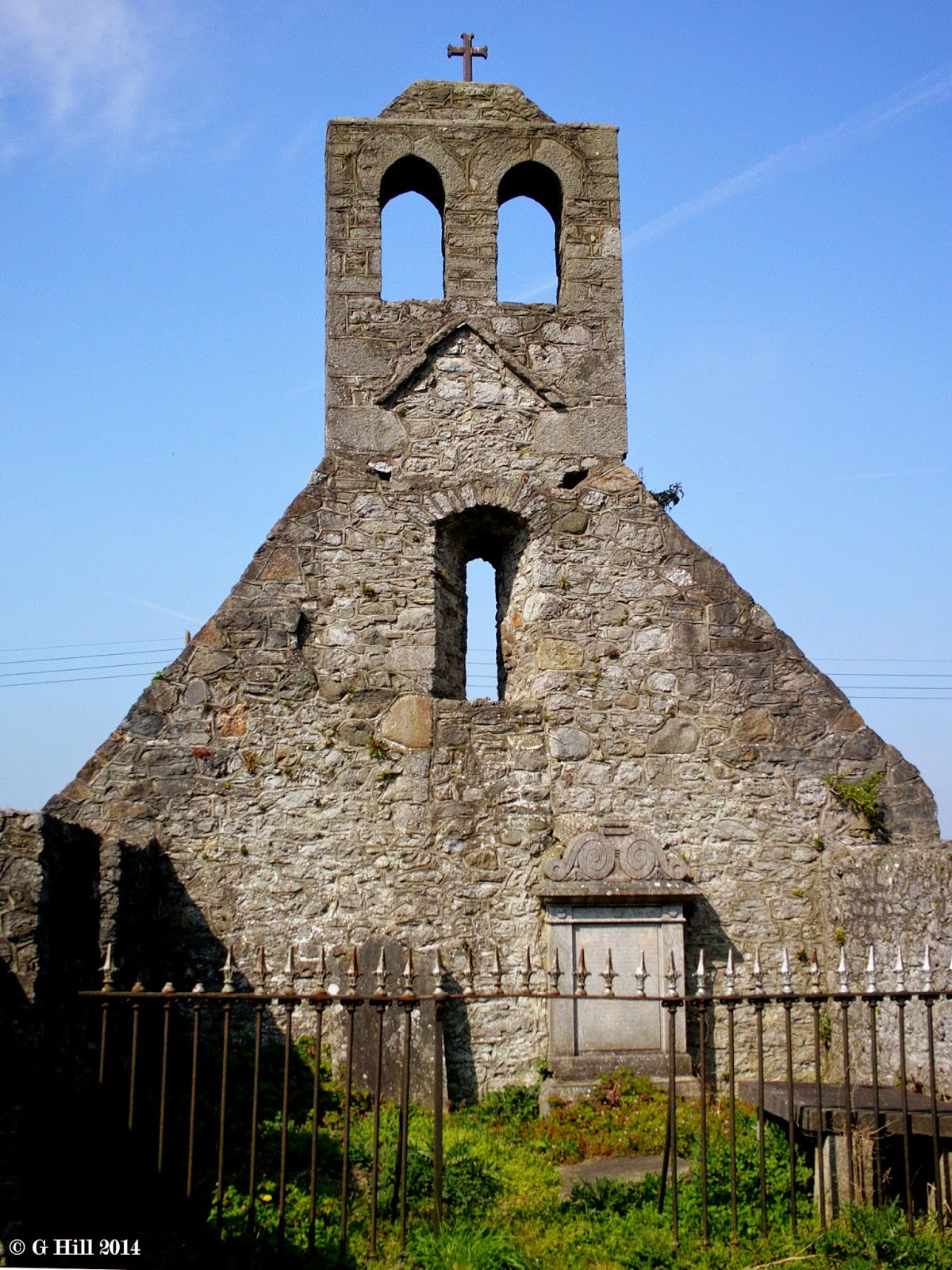 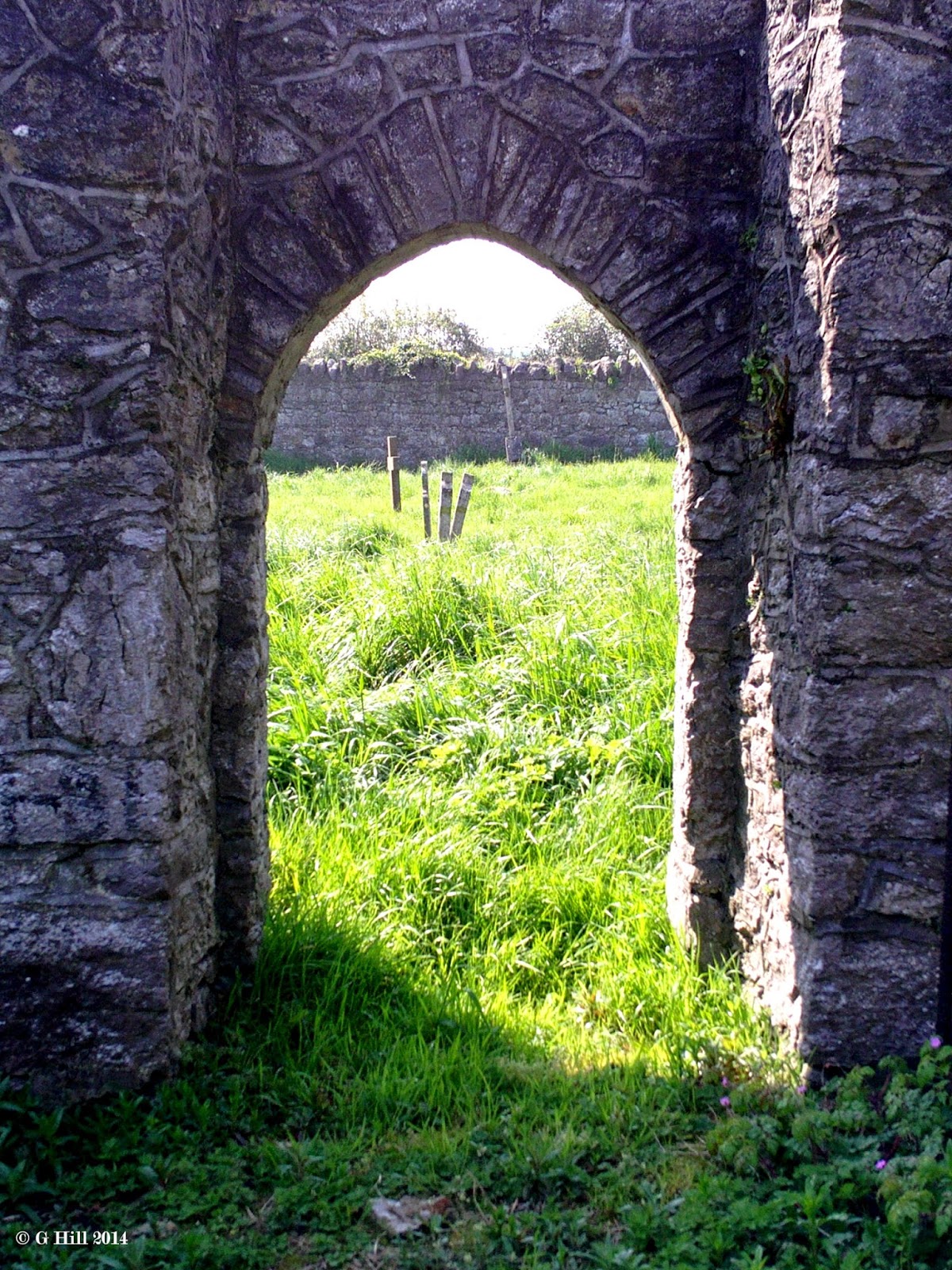 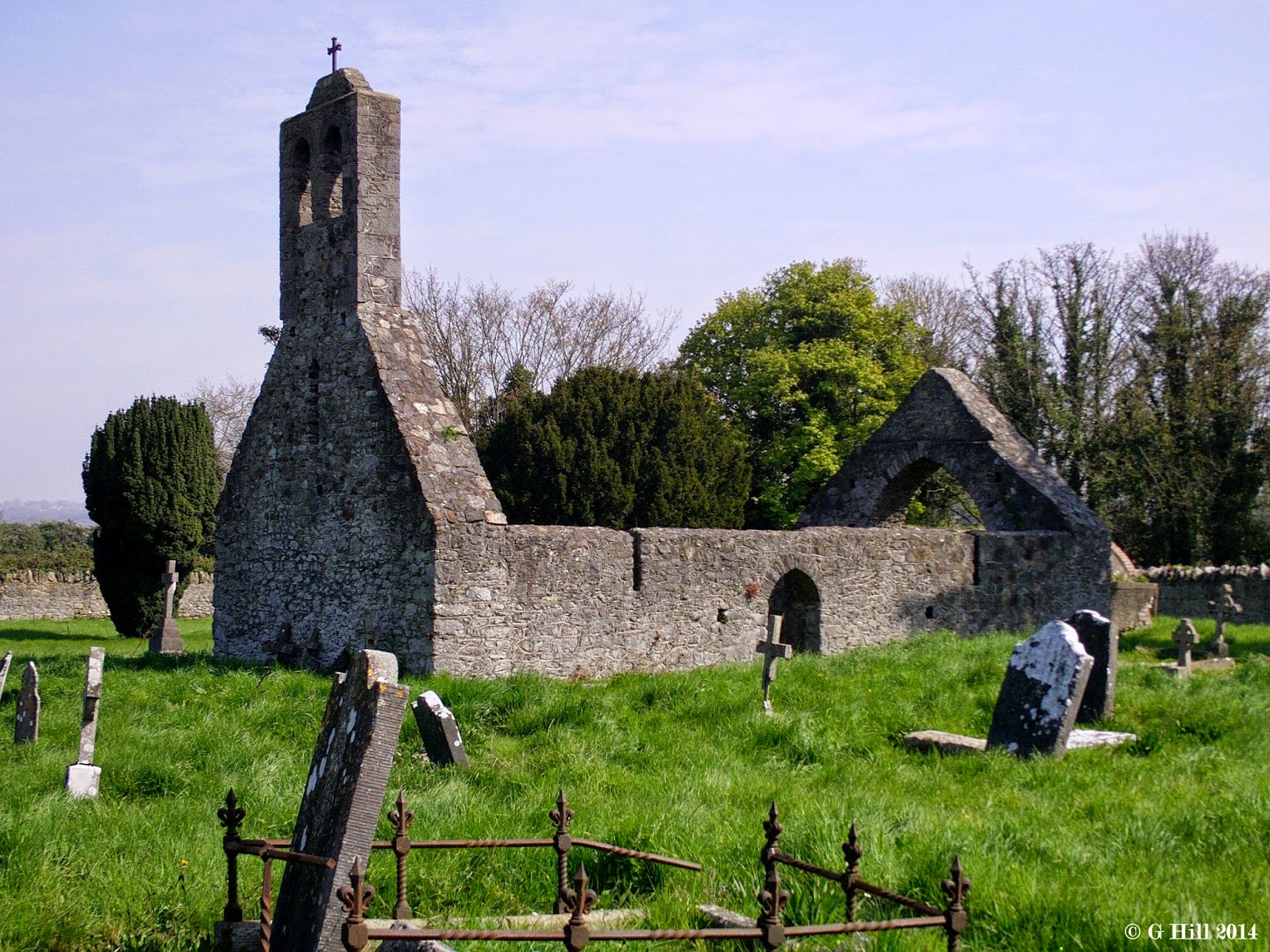 Posted by Castlehunter at 11:43 No comments: