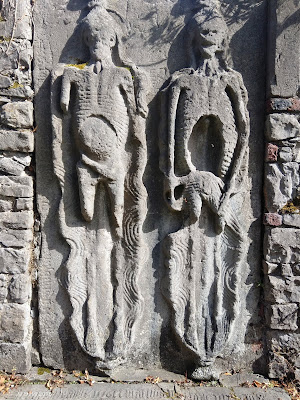 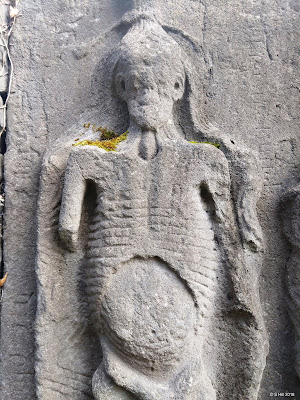 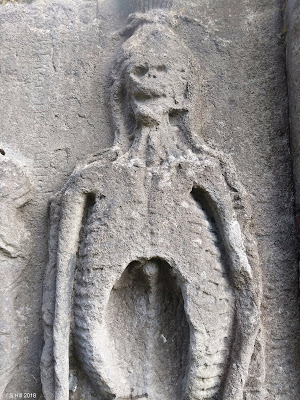 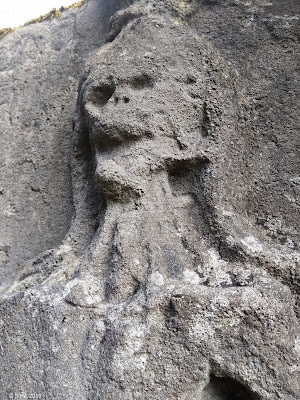 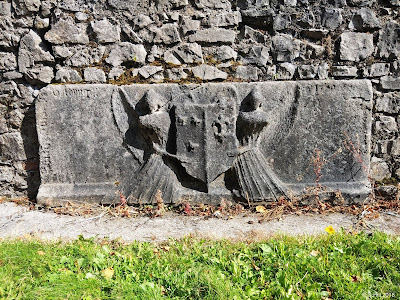 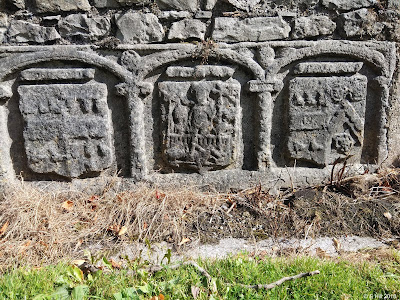 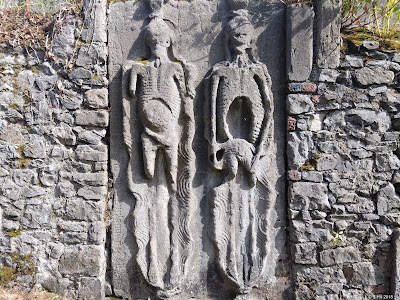 These creepy effigies are one of only ten of their type in Ireland. They are to found in the grounds of St Peter's Church of Ireland in Drogheda town.The remains are from the tomb of Sir Edmond Golding and his wife Elizabeth Flemyng and date back to approx 1520. An old medieval church once stood here but is now non-extant. When the present church o Ireland building was constructed in the 1750's the tomb was disturbed but most of its parts are preserved by being set into the Eastern boundary wall of the churchyard. The effigies formed the top slab and some of the side slabs are adjacent to it on the same wall.
Standing at approx seven feet high the effigies present the couple as rotting cadavers in torn shrouds.
The eerie disembowelment on Elizabeth is said to depict the hollow where once their was a womb. On inspection we found a large spider had spun a web within adding more creepiness to the macabre skeleton. The idea of depicting the couple as cadavers was apparently not meant to shock but to remind people of their mortality and that no matter how affluent they are they will all end up the same way. From the womb to the tomb so to speak. The church stands in the centre of Drogheda and can be accessed on foot during the daytime. There a a few parking spaces outside the church walls but thee are other parking sites nearby so a short walk is all that may be needed. One would not easily find these cadavers normally as you would likely pass the church without knowing of their existence. But they are quite a rarity and are well worth checking out.
To find the tomb remains take the MI and exit at junction 10 onto the N51 for Drogheda. Drive for approx 600m until you reach a roundabout. Go straight through and at the next roundabout take a right hand turn off the roundabout onto the R132 signposted for Drogheda..Drive for approx 1.8KM until you reach a set of traffic lights and a sign pointing left to Beaulieu. Turn left here (R166) and continue for approx 350m and you reach a small crossroads. Go through the crossroads and take the next right hand turn onto King Street. Take the second turn right off King Street onto William Street. The church car park can be found on the right hand side at the junction of the next crossroads. (There is a pub called Clarke & sons opposite). You will find the tomb remains in the Eastern section of the churchyard.  .
Posted by Castlehunter at 17:20 1 comment: 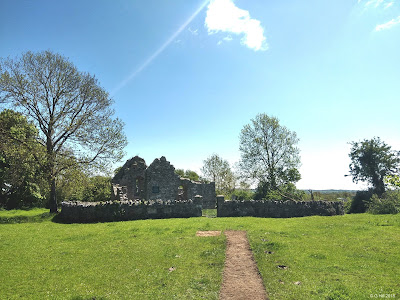 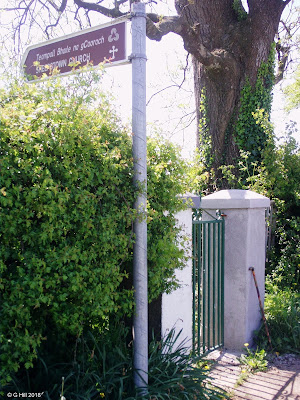 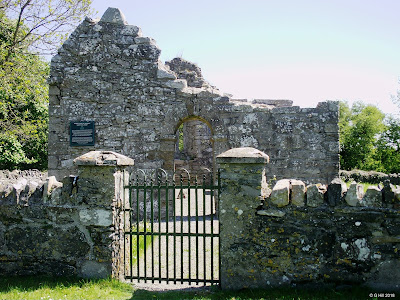 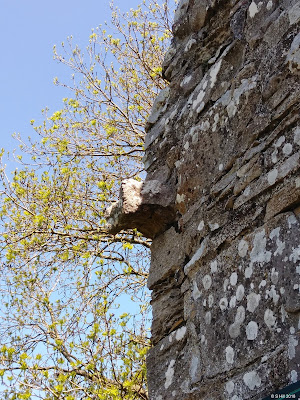 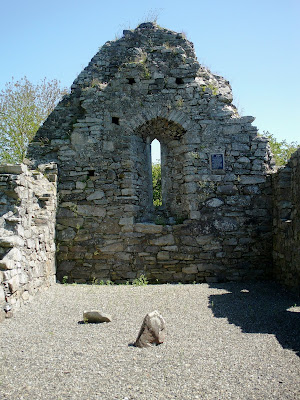 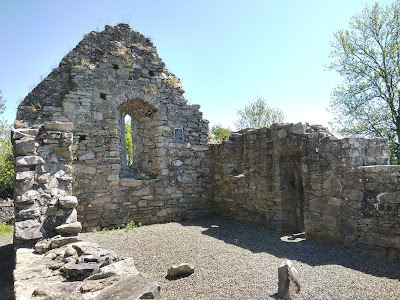 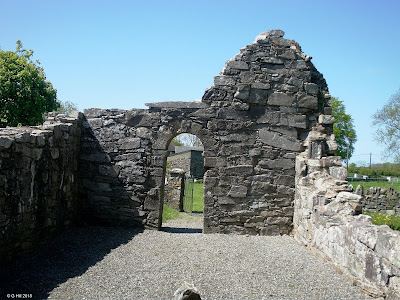 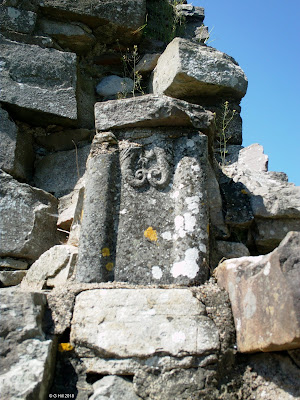 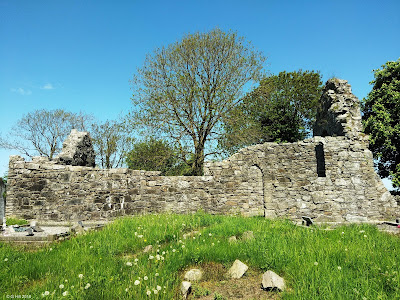 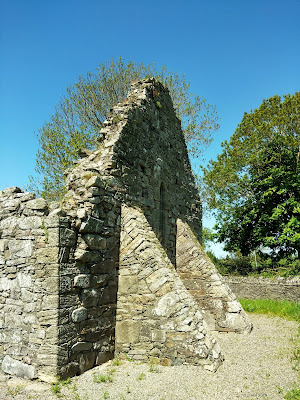 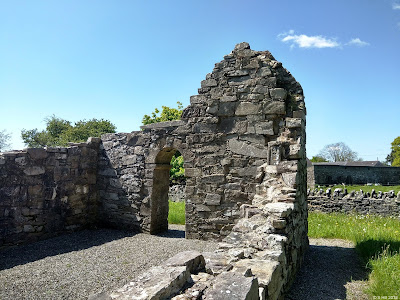 This small early parish church was constructed in the 12th century and dedicated to St Mulcin, a bishop.who died in 630AD.
Although construction focused on simplicity it does contain a few interesting features.
The church is situated in a walled enclosure that lies in a private pasture but it is only a short distance from the roadside and a sign and entrance gate allows pedestrian access.
The West facing wall features a fine Romanesque doorway and above it to the left a protrusion from the wall known as the "Clock Stone"  This is a type of corbel which was an architectural feature serving basically as a bracket or hook.to support an object.
The church is small measuring approx 15m x 7m and most of the walls are intact. A second doorway in the south wall leads into the graveyard and is thought might once have led to a sacristy.. Two buttresses can be seen on the exterior of the East wall which were probably added later to support the wall from falling outward. All four corners of the church have beaded mouldings in the stonework. This beading is also evident on the Romanesque doorway.
It's very peaceful here considering there is a main motorway nearby and the ruins are very pleasing to the eye. Access was so easy but be careful crossing the field to the enclosure as there are sometimes thin electric fences erected to keep cattle away from the church. On our visit there were two or three long cords strung out on posts but they were only cord and not electrified.
To find the ruins take the M9 motorway and exit at junction 10 taking the R699 for Callan. Drive a short 100m and park at the small parking area in front of the first cottage on your right.then simply cross the road where you will see the entry gate and sign.
Posted by Castlehunter at 16:56 No comments: