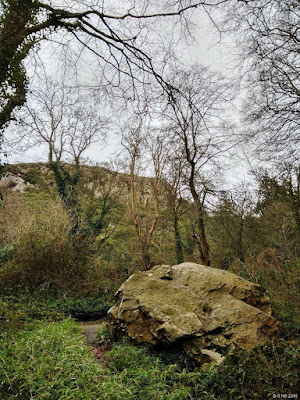 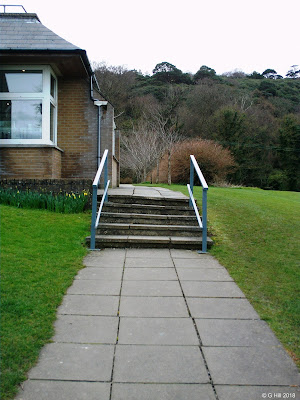 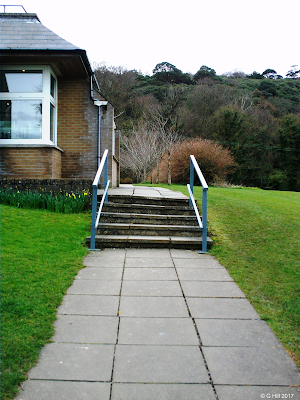 Above Image: The access steps right of the Hotel 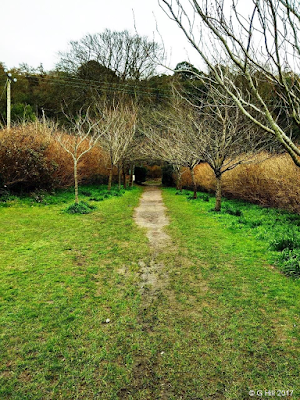 Above Image: The initial trail 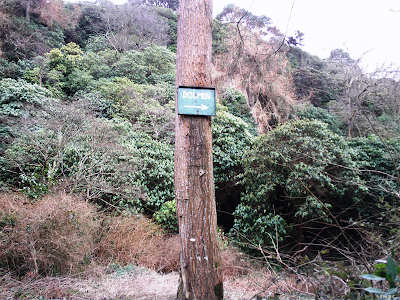 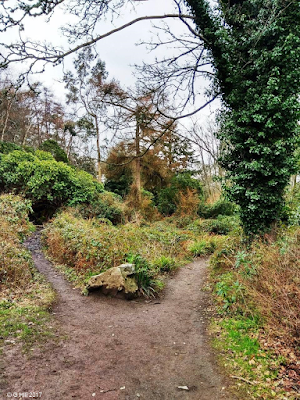 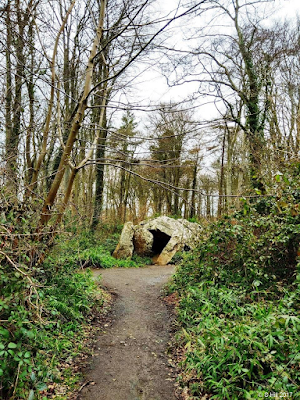 Above Image: First view of the Dolmen 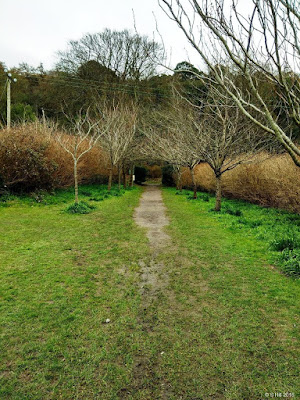 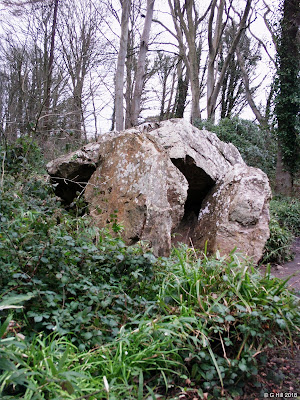 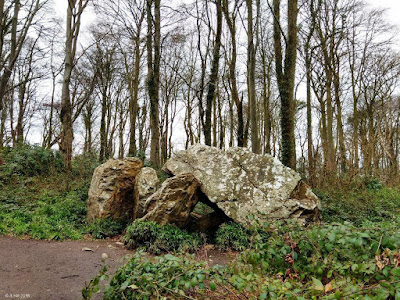 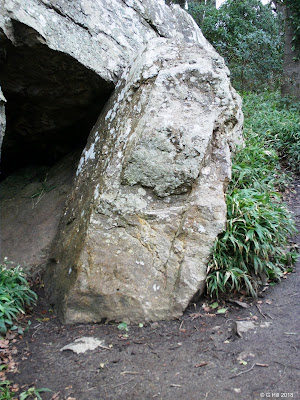 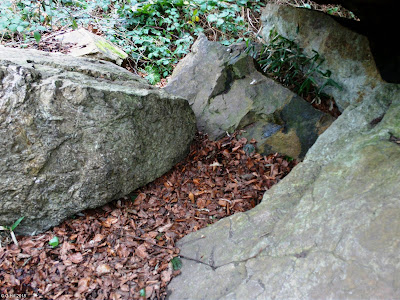 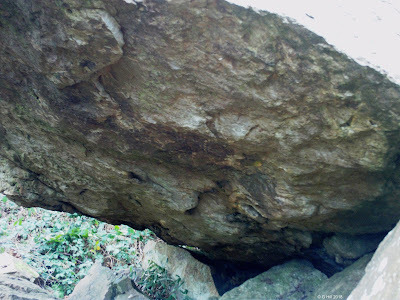 Above Image: Beneath the capstone 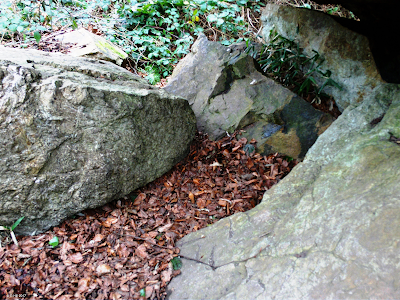 Above Image: The portal tomb floor 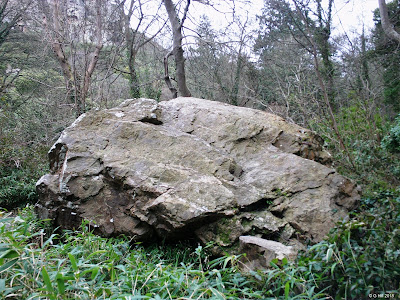 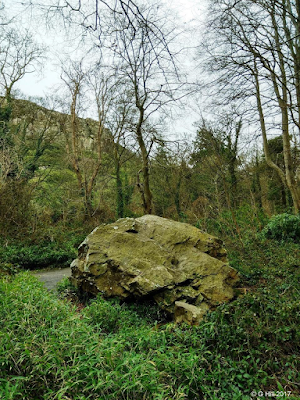 Here's another hidden treasure. Located in the woodland behind the Deerpark Hotel in the grounds of Howth Castle this ancient portal tomb bears a legend that doesn’t quite ring true.
The story goes that this is the grave of Aideen wife of Oscar of the famed Fianna. When Oscar died at the battle of Gabhra, Aideen went into shock and died as a result. Oscar’s father Oisin had her buried at Howth and had the Dolmen constructed as a memorial to her. The Fianna are of a time dating around the very early medieval period but the portal tomb is exactly like others of it’s ilk dating to the Neolithic period which ended in 2500BC. But as they always say print the legend! The tomb has the second largest capstone in the country weighing in around 75 tons. The largest is the Brownshill Dolmen in Co Carlow (see earlier post here)
The grounds behind the hotel have many trails but the trail to the dolmen takes you through the rhododenrons. It’s a narrow trail with many little tracks leading off mostly to the left. A lot of large rocks lie among the trees and could be mistaken for the dolmen at first sight but they are just debris from the nearby cliff face. One you stick to the trail its not too long before you come across the tomb and it really is a stunning example of its type. The huge capstone has collapsed to one side forcing the portal stones apart but you can still step inside although the imposing capstone certainly made me a little nervous. The woodland setting and nearby craggy cliff all lend a very atmospheric feeling to the place. We visited on a Friday afternoon and encountered no one else at that time

To find the Dolmen take the R809 from the M50 motorway towards Clarehall. Continue on this road through Donaghmede until you reach a T-Junction at Baldoyle. Turn right and take the nearby left hand turn onto the R106. Go through the railway level crossing following the coast until you reach Sutton cross. Turn left at the Bank of Ireland and continue on this road (R105) towards Howth. After approx. 1.9km you will see the large entrance gates to The Deerpark Hotel on your right. Follow the road right up to the hotel ( you will pass Howth Castle on the way which I will cover later) Park in the car park and Follow the steps up on the right hand side of the hotel adjacent to the golf course. Follow the pathway and you will see a sign posted on the tree directing you to the Dolmen. Turn right here and follow the path keeping to the right along the way and approx. 200m along you will reach a T-junction with another pathway. The Dolmen is a few metres down the right hand path.
Posted by Castlehunter at 16:11 1 comment: 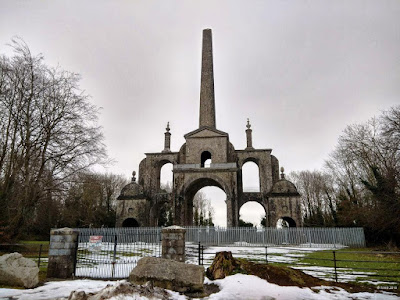 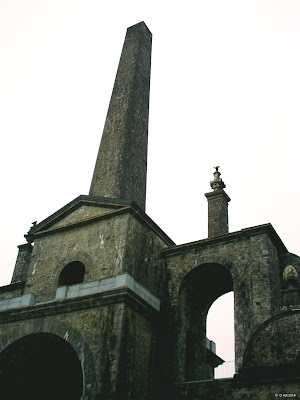 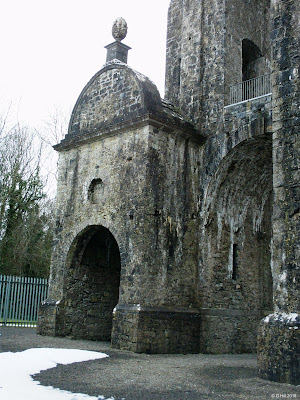 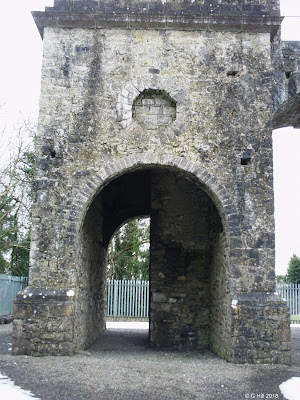 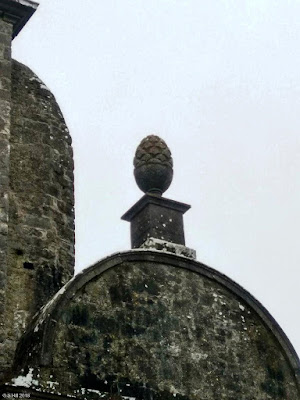 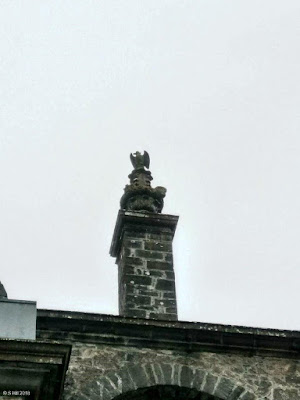 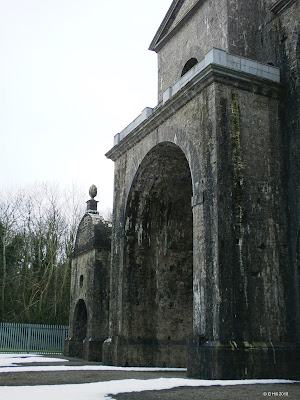 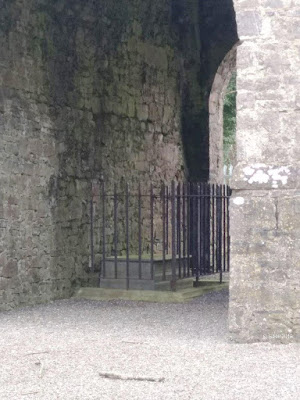 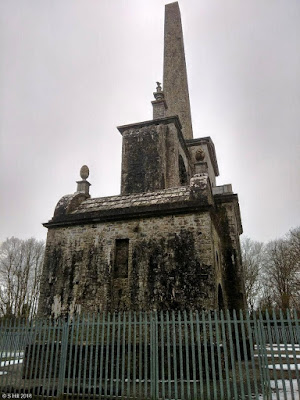 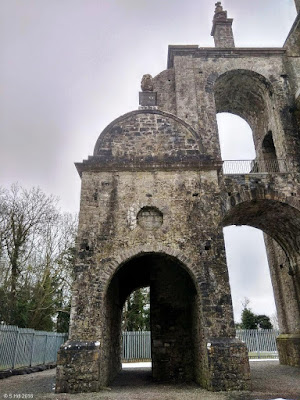 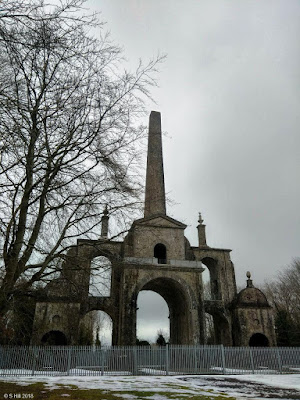 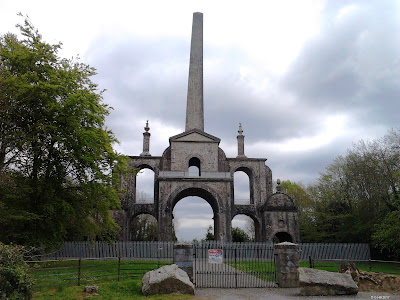 
This unique and imposing structure can be found along a very narrow laneway not too far from Leixlip. To be honest unless you were deliberately looking for it you would never know it was there.
Following a bitter winter and a hard hitting famine in 1740  Katherine Connolly, the widow of the famed William “Speaker” Connolly, who was of a very humanitarian disposition commissioned the renowned architect Richard Cassels whose work has included Leinster House and Powerscourt House to design an elaborate structure that would also serve as a rear entrance gatehouse for Castletown estate. The locals could then be employed to construct it thus giving them a source of income to navigate the hard times.
The structure when completed cost a hefty £400 and stood 140 feet in height. It is composed of several arches and a very tall obelisk stretching skywards. There are adornments of eagles and of pineapples. The inclusion of pineapples represents at the time a sign of affluence as this fruit was exotic and much sought after. The actual position of the structure left it actually in the end not on Castletown estate but on the adjoining lands of Carton House thus it became known as Connolly's folly. Nonetheless this incredible monument has stood for nearly 300 years but did over time fall into disrepair. To prevent it becoming ruinous it was acquired and eventually restored in 1965 by the Irish Georgian Society and it is now under the auspices of the OPW.
Unfortunately these days it is surrounded by an ugly looking fence with a large padlock but it still does not deter from the majesty of this monument. There are rails visible above the main arches and I wonder are they merely an adornment or was there actually access inside to reach these. Standing at the base and looking up you really feel dwarfed by it. I visited briefly last Autumn but on this visit recent snowy conditions really brought definition to the structure.
Katherine Connolly also commissioned another folly on Castletown Estate known as The Wonderful Barn. You can see my previous post here Thanks to Karine Demeure for suggesting a visit to Connolly's folly.
To find the folly take the M4 heading West and exit at Junction 6 for Leixlip. At the top of the exit ramp follow the roundabout around to the right and take the exit for the R449 again for Leixlip. Continue on this road and on the second roundabout encountered turn left onto the R148. Drive through two sets of traffic lights and after the second take the small laneway on the left signposted as the L81206 (Obelisk Lane). About halfway down this long lane you will reach a fork in the road. Keep to the right hand lane and continue on for approx. 1.7KM until the road bends sharply to the left. The folly is approx. 100m along on the left. You can park at the gate which though locked has a small pedestrian entry point to the right of it.
Posted by Castlehunter at 10:32 2 comments: