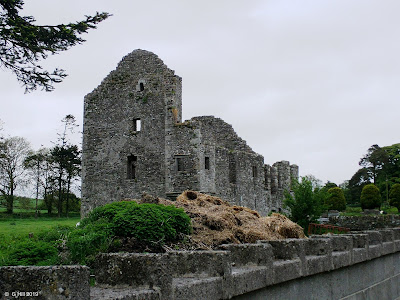 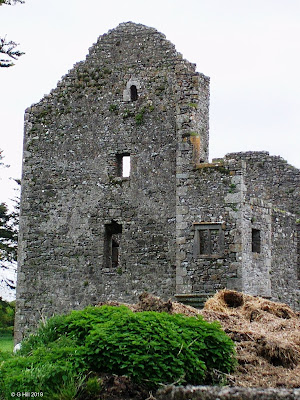 Above Image: The Bartizan at the South-East Corner 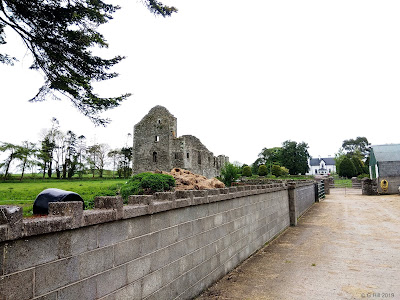 Robertstown is a Barnwall Castle that is believed to have been constructed in the early 17th century. According to the civil survey conducted between 1654 and 1656 one Margaret Barnwall gave a deposition of ownership which included mention of a castle. The castle was a three storied fortified manor house with a North wing added later and was most certainly ruinous by the time of the ordnance survey mapping in 1837.
The building is a long rectangular shape and two of the ground floor chambers are barrel-vaulted. The original lintelled entrance door was in the North wall. One of the most unusual features are the two projecting Bartizans positioned on the original South-East and North-West Corners. They are supported by corbelling which is more indicative of castles in Scotland.
We came across the ruins completely by accident while scouting the area and saw that it was located on farmland. A local graveyard groundskeeper informed us that it was unfortunately off limits but he gave us a name to inquire with but unfortunately the said person was out of the country at that time. We will certainly follow it up for a future visit.
An interesting local folk tale about the castle that arose out of the research of The Irish Folklore Commission founded in 1935 by James H Delargy was that of an occupant who would position himself at one of the castle windows with a gun and open fire on unfortunate passers-by. This rather unhinged individual was finally caught off-guard outside of the castle by a parish priest who shot him dead thus ridding the area of this menace. Better turn up for service at his church, eh!
To find the ruins (and they are worth seeing if you are anywhere near the area) take the N2 out of Kells for Ardee. Drive along this road passing through Carlanstown and Staholmog (there is a service station and mace store here, good for refreshments) and continue for approx 350m passing through a small crossroads with the L47111. Drive another 650m and take the next left hand turn (there are a set of pillared gates opposite it) Drive though the next two small crossroads, the second being signposted for Cormeen. The castle is 700m further on and located on your right hand side. We just parked at the gate to view it.


Posted by Castlehunter at 16:40 No comments: