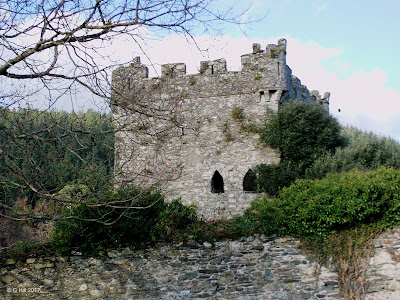 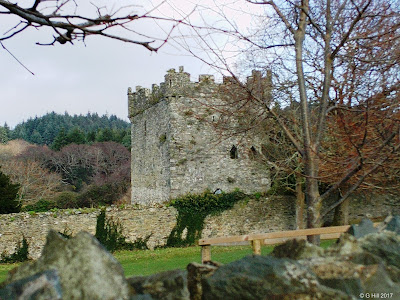 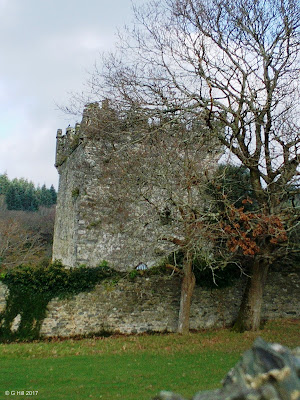 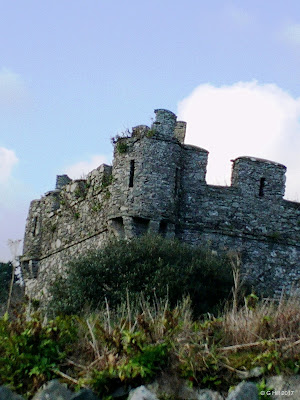 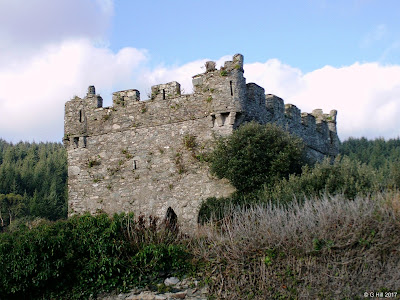 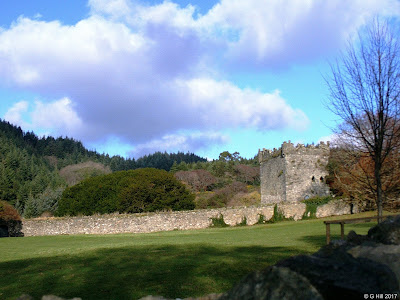 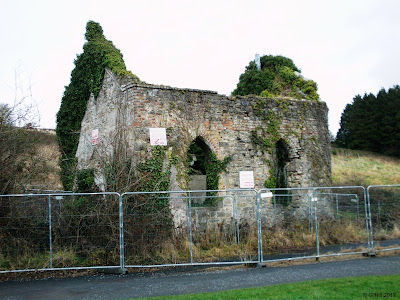 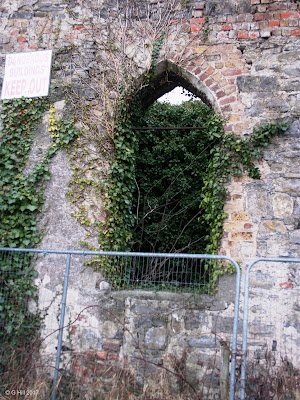 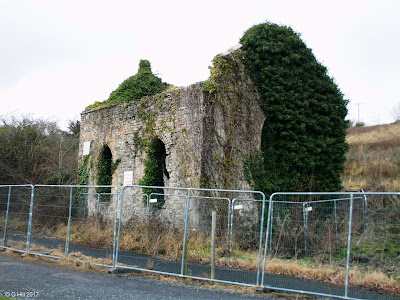 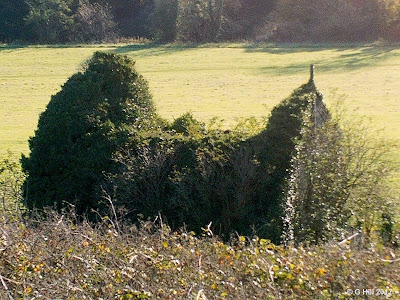 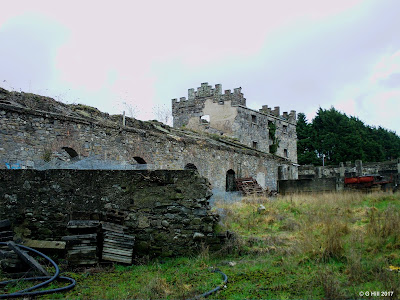 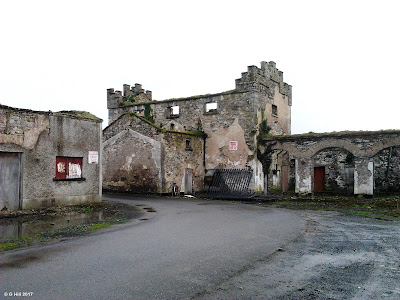 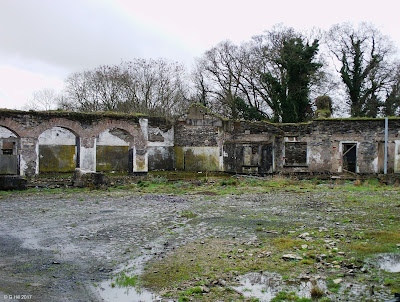 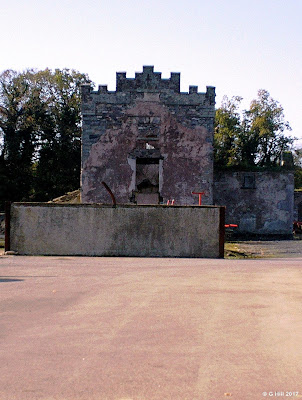 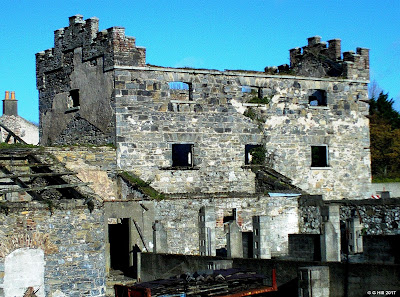 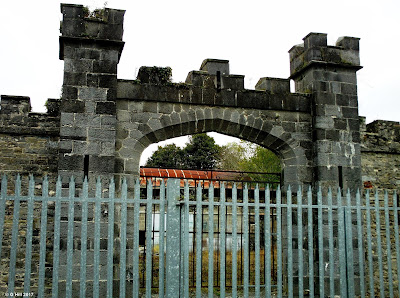 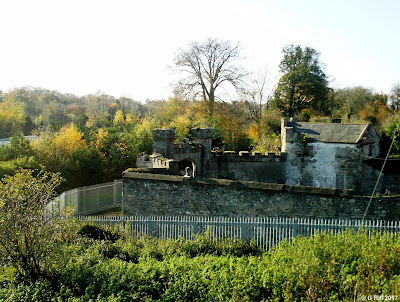 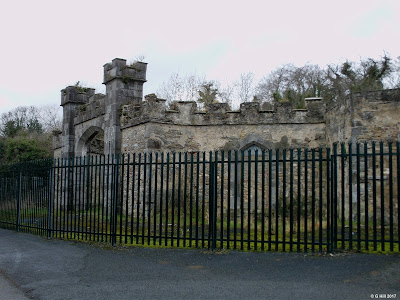 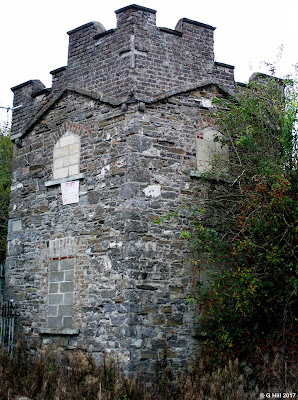 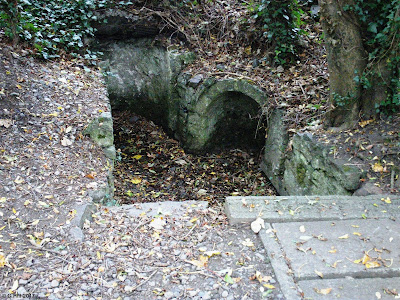 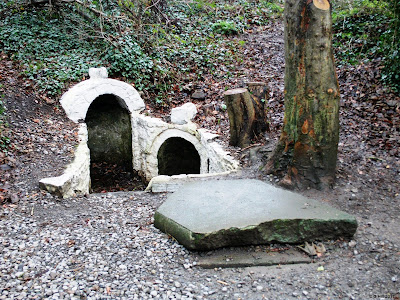 The lands have become a public park retaining the name of St Catherine and within are some remnants of the old estate. These include the castellated gate and wall of the lower yard in which there are the ruins of stables and a mill. These have been cordoned off and many dangerous building signs placed upon them. But there is apparently restoration work afoot and so on my last visit I was surprised to find the usually austere black security gate open and unattended. Of course I took the opportunity to have a stroll around the yards but it wasn’t possible to enter the large mill ruin. What was milled here I’ve yet to discover it may have been a flour, oil or even a sawmill but there is a small stream running adjacent which leads into the Liffey waters which may have served as a millrace. The stables seem full of debris from the house possibly the one that was burned or the derelict farmhouse adjacent to the mill. One item was the remains of a toy rocking horse. The mill and farm buildings all now abandoned combined with the castellated gate give an impression of the grandeur that the estate must have had in its day.
Very close to the stream on one of the pathways outside of the mill and stables is St Catherine’s well founded at the time of the priory and now maintained visited as a healing well. A short walk down from the well heading into the parkland are the ruins of a small chapel which some records state was built in the 18th century as a possibly as a family chapel most likely when the additions were being made by Robert Butler. It is also likely that it was a small COI chapel that fell into disuse and ruin after 1900. It too now lies fenced off with danger signs upon it but truthfully a little clearing out and restoration and it would be fine. The ruin lies at the bottom of a grassy hill which I believe is the location of the former priory that was destroyed.
It’s an interesting little quarter within the park and well worth a visit. The park is usually open until 5pm in winter and 9pm in summer. Two entrances from different directions are served by car parks. The one I took was the one leading in from Laraghcon just over the Liffey bridge from Lucan Village.
To find the ruins cross the Liffey Bridge heading Northwards out of Lucan Village. Follow the main road straight through two roundabouts and approx. 300m after the second roundabout there is an entrance left onto a lane. (It is signposted for St Catherine’s) Follow the lane which bends at one point to the right and then subsequently to the left. This leads you to the car park. Once out of the car follow the trail on the West end of the car park through a black barrier. Follow this road adjacent to some sports grounds until after a bend to the right there is a small left turn. Follow the left turn to the bottom past the locked security gate (through which you can see the former stables) and turn left. This gives you a proper view of the mill through another gate and also on this path to the right of the gate is the holy well. If you continue down this pathway to the junction at the end and turn left this will lead you directly to the ruined chapel.