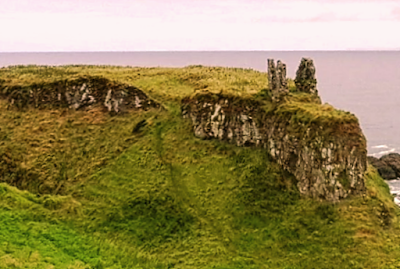 Above Image: The ruins on the basalt outcrop. 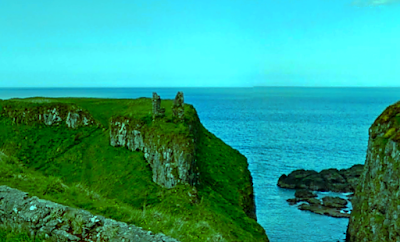 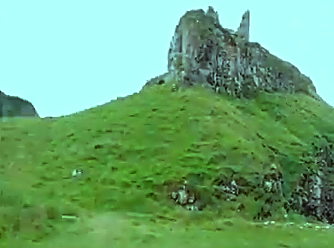 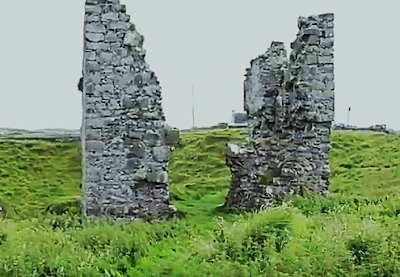 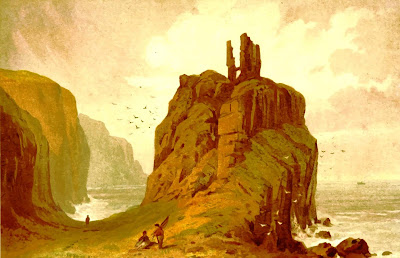 Set strategically on a large basalt rock outcrop on the dramatic Northern Irish coast lie the scant remains of Dunseverick Castle. It is thought to have been constructed in the the 15th century by the O'Donnell's who were preceded by the O'Cathain's and McQuillan's. Indeed the O'Cathain's held ownership here from 1000AD for over 300 years then regaining control in the mid 16th century.

In 1642 General Robert Munro, a veteran of the Thirty Years War, took hold of the Castle by force as he did with many castles in his Ulster campaign during the Irish Confederate wars and almost destroyed it. An attack occurred again in the early 1650's when Cromwellian troops completed the task leaving only the remains of a gatehouse and small tower which they had failed to uproot from the ground. The remains suffered another loss in 1978 when subsidence caused the collapse of a small attached tower into sea below.

The site at Dunseverick is a very old an important one in that it was the terminal point of the fifth ancient road from Tara, seat of the High Kings. It was known as the Slige Miiuachra. Legend has it that St Patrick also passed through here in the 5th century.

It is possible to get up close to the ruins by way of a rough track leading from the wooden stile at the roadside just before a car parking area which is adjacent to the rocky outcrop. The route is an offshoot of the causeway cliff walk and although it's only a short walk to the castle it is quite a steep walk up a grassy track to get to the rocky summit. I wouldn't advise doing so after rainfall or in any windy weather as it could increase the chance of losing your foothold. But if you do reach the ruins you will find it worth the effort if only for the dramatic sea views from there.

Not much remains now of the castle just a few shards of former walls. The the small tower that appears to be attached in older prints subsided into the sea in the same manner as the kitchen of nearby and very striking Dunluce Castle (see earlier post here) I am led to believe that a well also existed on the northern side of the former castle but it too seems to have succumbed to the ravages of time and no doubt the earlier destruction of the castle.

The causeway coast is so rich in history and antiquity and is worth spending a few days exploring. The seascapes are also very dramatic looking out where the North Channel joins the North Atlantic.

To find the ruins take the B15 out of Ballycastle and continue on to Ballintoy. Drive through Ballintoy and the road becomes the B147 so continue on for approx 9.5KM until you see a sign pointing right for the R146 to Dunseverick. Turn right here and continue for approx 1.8KM and you will eventually spot the ruins on your right. There are a small group of bungalows at the roadside and a parking area is signposted to the right just past them. Then to get to the ruins simply walk a short distance back along the road you came and you will see the wooden stile beside a field gate that allows access.