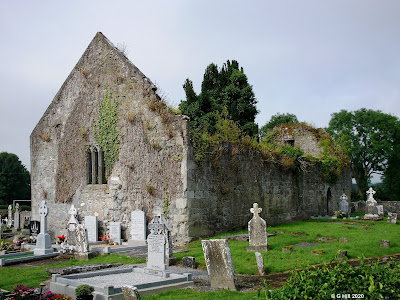 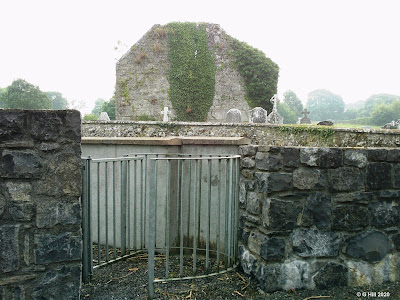 Above Image: The entry gate 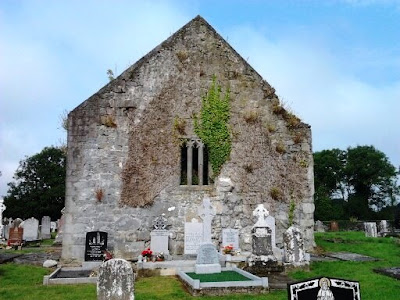 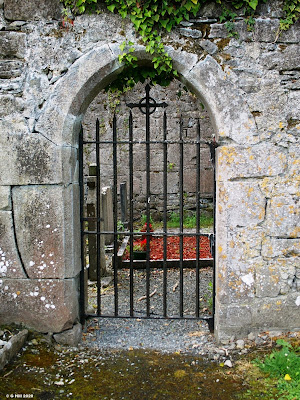 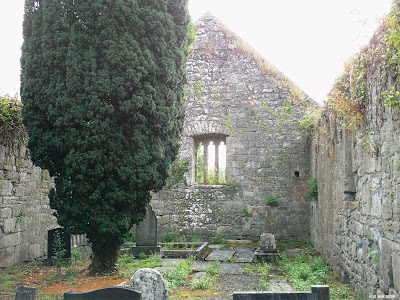 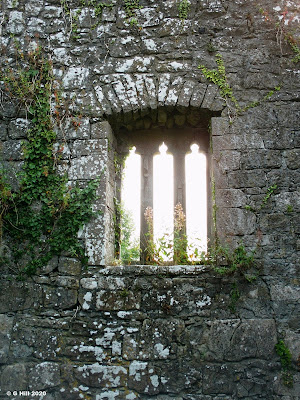 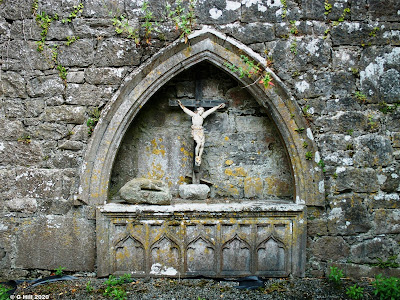 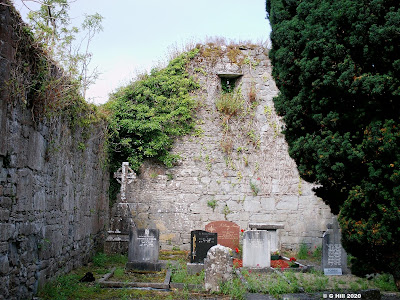 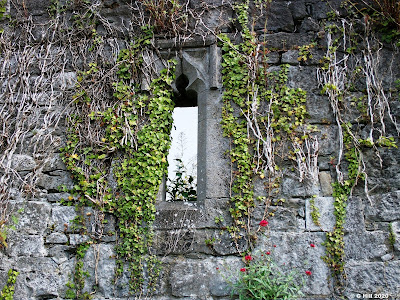 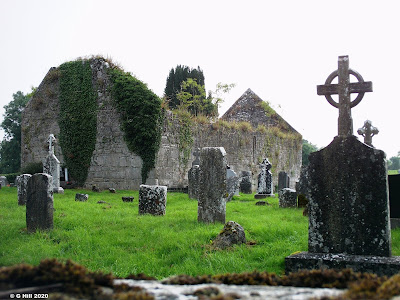 This medieval church ruin lies a little over two miles North of Gort in County Galway. The church is dedicated to St. Attracta a contemporary of St. Patrick.The dedication is a little surprising as the patron saint in this area is generally St. Colman and a number of places have been named after him. His remains are buried in the nearby site of Kilmacduagh (see previous post here).
While the church commemorates St. Attracta the townland of Kiltartan is taken from the Gaelic Cill Tartain, or Church of Tartan.
We found the ruin while travelling in the area and stopped for a look. It was sited in an oval shaped walled enclosure. where a metal swing gate allows easy entry into the cemetery. The peace and solitude of this location is almost deafening, the silence broken only by the occasional crows that seem to congregate for some reason in graveyards.
You can enter the ruin by way of a nicely arched doorway in the North wall which is gated but thankfully unlocked.
The remains measure approx 65' x 25' and all walls are standing although there is some degree of deterioration on The West gable which also has a growth of the dreaded ivy attached to it.
Inside the ground is a bit rough underfoot but there are quite a few graveslabs peppering the floor which aid in moving around. A very tall and prominent yew tree is growing within the walls..
In the inner North wall an arched recess is located containing a crucifix and what looks to be the remains of the font from the church. This recess at first I thought might been a Sedlia or seating for priests but on closer inspection appears to be a Tomb Niche.
There are several narrow windows in the church but the most interesting is the triple lighted window of the East wall which is the most decorative.
Local history records that the church was used as a protestant church after the reformation and when it fell into ruin is unclear. Two facts available are that it is listed as ruinous in 1837 on the Ordnance Survey map of that time and also that a new larger Protestant church was built in Ballyhugh, Gort around 1810. So the larger church may have taken the congregation and closed up the smaller church as was the case with many small churches at that time..
To find the ruin take the N66 heading North on the main street out of the village of Gort and when you reach the roundabout take the third exit signposted for the R458 to Ardrahan. Drive for approx 2.5KM until you have passed through a small crossroads with the L8525. About 80m past this a small road forks to the left. Turn onto this road and continue for another 100m where it forks again. Stick to the left hand fork and you will find the ruins on your right approx 300m ahead. You can park easily enough in the small car park adjacent to the ruin.
Posted by Castlehunter at 14:53 No comments: 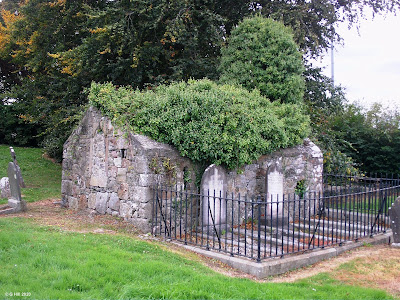 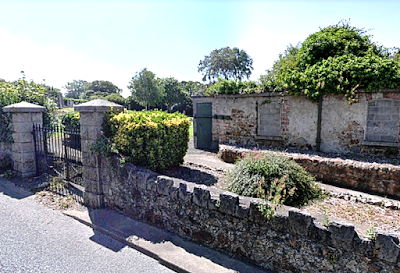 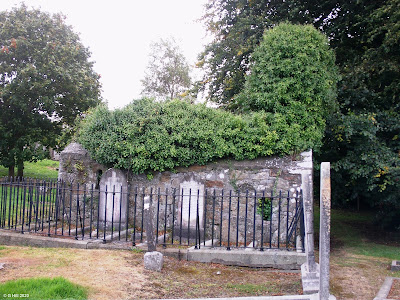 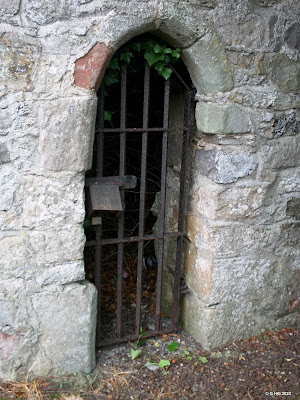 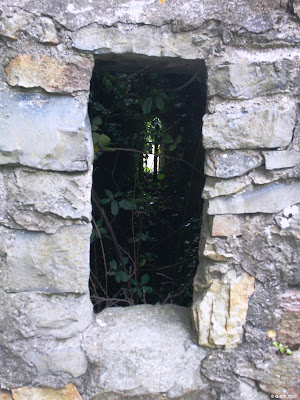 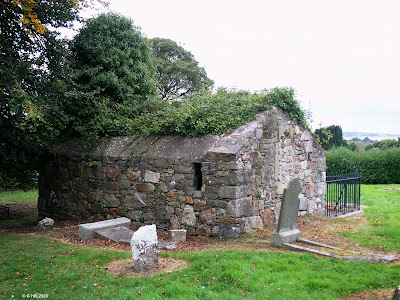 St.Fintan was a 6th century monk later canonized and was associated with the important monastic site of Clonenagh. It is still unsure how his association with Sutton came about. The fact that the name Sutton is derived from Gaelic "Sui Fhiontain" which translates to The Seat of Fintan would indicate some relationship with him in some form or other. To locals the old graveyard at Sutton is the resting place of Fintan and the small church was a shrine to him bearing his remains when they were transferred to Sutton when Clonenagh ceased to be in the 12th century. The little church is thought to date to the ninth century leaving the idea of it being too early a construct to be a shrine still shrouded in mystery. There is a non-extant holy well named after him not to far from the graveyard and the new church also bears his name. So one would assume that he had some connection with the area.
The chapel ruin was probably used later as a local place of worship and at approx 16' x 8' in size must be one of the smallest chapels in the country, but I believe the little church of St Benan on Inishmore in the Aran Islands is thought to be the littlest at approx 12' x 7' in size.
When I visited St Fintan's I found the chapel at the West end of the old graveyard. There is the ruin of an old keeper's cottage at the entrance gate. The East window of the chapel is bricked up leaving only two small windows in parallel with each other on the North and South walls. The doorway is in the West wall and is gated and locked and the interior looks quite overgrown. On my visit the small belfry on the West wall was covered in ivy and so is what remains of the roof. I Believe the walls slant up at an angle but the apex of the roof is missing being replaced by a metal grill. This too is overgrown at the moment. The belfry mentioned was a later addition to the chapel giving more evidence of it being used as a small place of worship. At its North wall a fenced area has been erected to contain the graves of members of the Bellingham family.
When the chapel fell into ruin is unclear but there is a print in the National Library by Eward McFarland from 1853 depicting the chapel as ruinous.
To find the ruin take the R105 towards Howth and turn right at Sutton Cross onto Greenfield Road. It is signposted as the scenic route. After approx 900m the name of the road changes to Carrickbrennan Rd. Continue for another 800m and you will see the new cemetery on your right. The old graveyard entry gate is just beyond this. You can park at the wall of the new cemetery.
Posted by Castlehunter at 20:16 No comments: