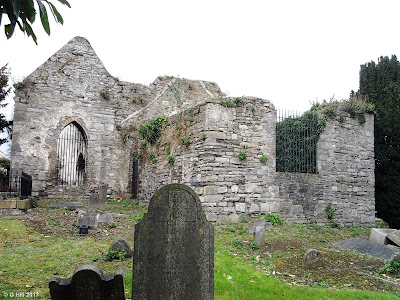 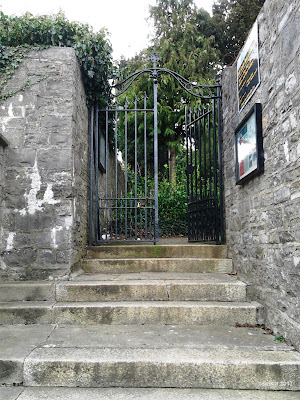 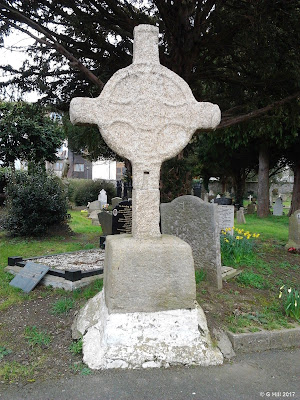 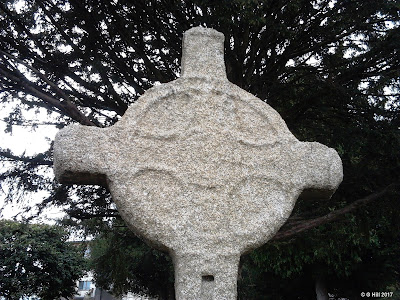 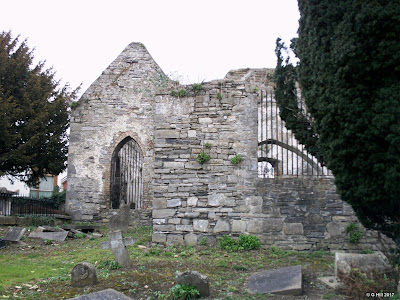 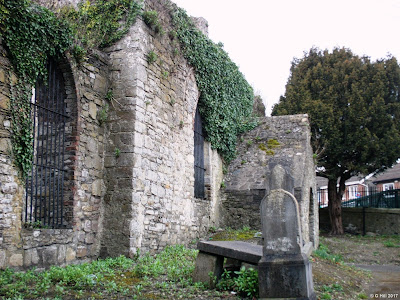 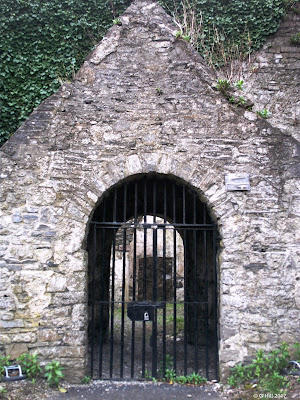 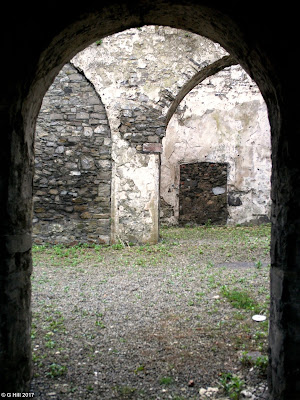 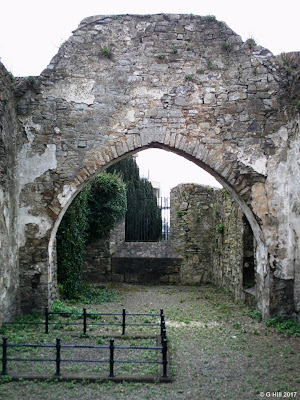 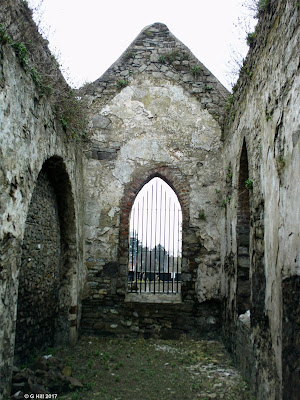 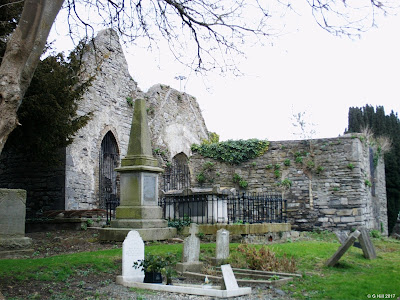 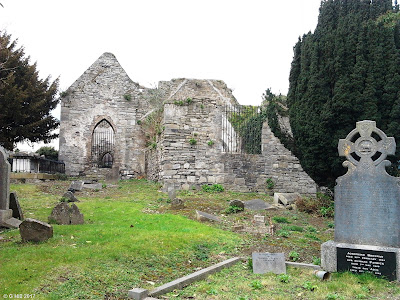 
To find the ruins and cross take the junction 5 exit of the M50 for city centre/Finglas. This leads onto the R135 (North Road). Continue on until you reach a roundabout. Go straight through and approx. 500m later you will drive under an underpass and subsequently an overhead footbridge. 140m beyond the footbridge on the left there is a Permanent TSB bank with a small car park in front and you can turn in here and park. Directly across the road you turned in from is Wellmount Road. Simply cross over the road to it and on the corner there is a line of stone cottages with a ramp leading up in front of them . At the top of the ramp is the entrance gate to the graveyard. The gate is open on Sundays and Bank Holidays from 10.30am-5.30am. Outside of these times you can obtain a key from Thomas Lynch at 5 Barrack Lane which is one of the stone cottages mentioned.
Posted by Castlehunter at 12:58 4 comments: 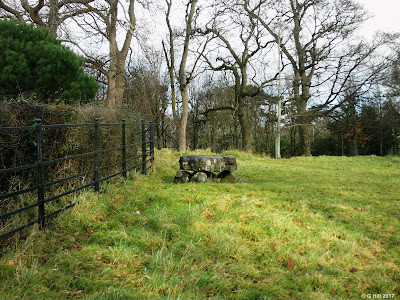 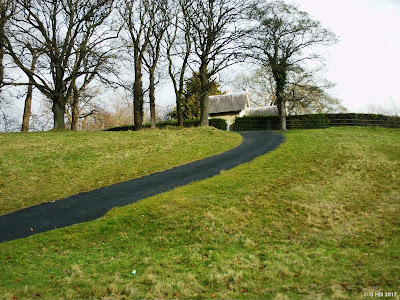 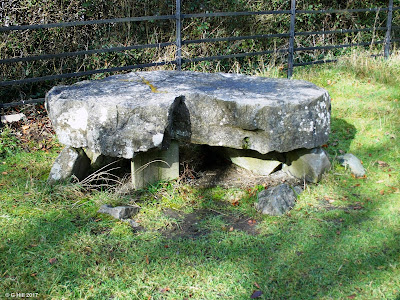 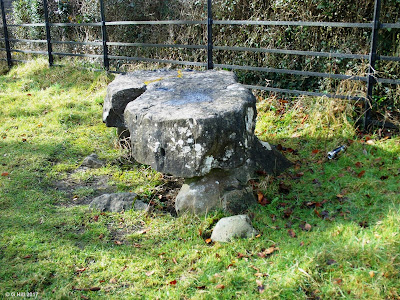 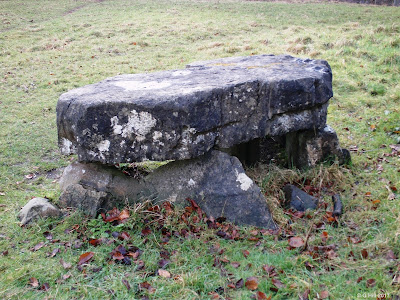 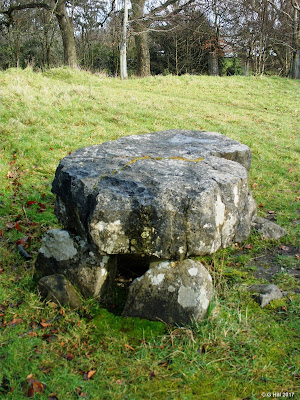 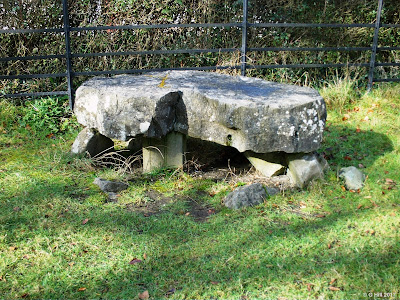 Posted by Castlehunter at 11:51 No comments: 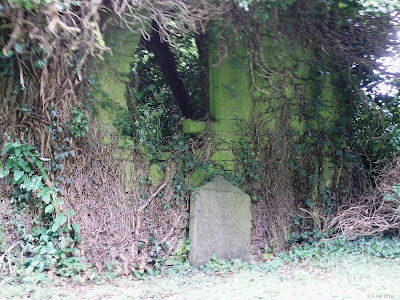 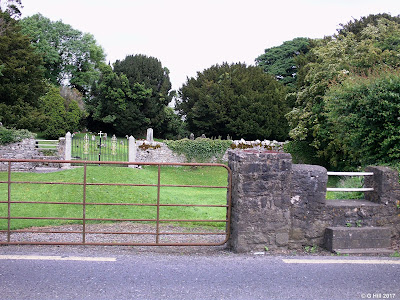 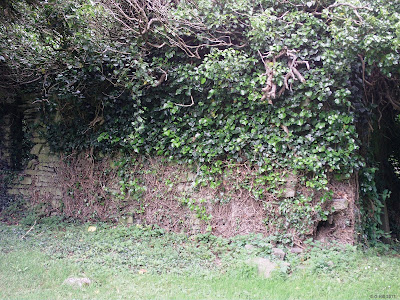 Above Image: Part of West wall 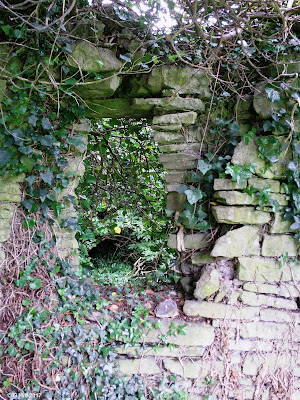 Above Image: Remains of a window 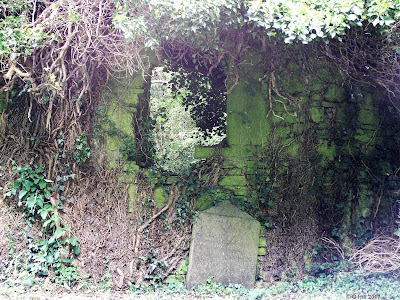 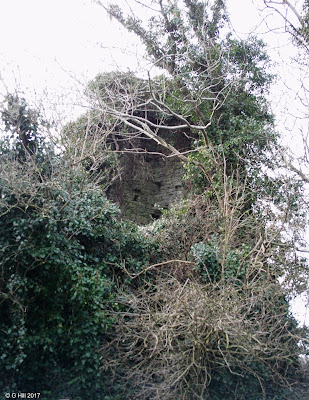 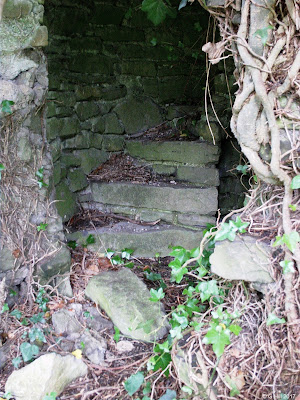 Above Image: Entrance to tower and stairs 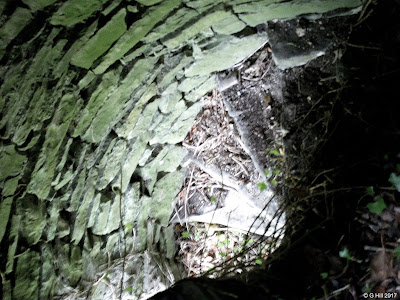 Above Image: A view downwards within the tower

I first came across this site in 2013 as I had heard there was both a church and a castle ruin. All I could locate at the time amongst the trees and wild overgrowth was a partial wall and window. I could not see any part of the castle tower. A bit despondent I left but found myself in the vicinity again recently so I decided to have another look.

The town land on which this ancient graveyard is located is called Whitechurch and it was the site of a monastery in 1300 founded by the white friars hence the origin of the name. The present ruins may or may not have formed part of the monastery but it was certainly used as a parish church until the early seventeenth century where thereafter it fell into ruin. Not much is known of the strong tower that was built here but it most certainly of Norman origin and appears to be placed in close proximity to the church and may not have been a castle as such but have served as a fortified refuge for the clergy..
After crossing the two stiles from the roadside I found myself back at the graveyard. In general it appears to be maintained well and contains a lot of jagged ancient stones. On this occasion I got to see what remains of the church as the overgrowth had receded a little or was cut back. Still standing are the West wall and south gable. The west wall is crumbling and contains the remains of a window and doorway. Within, the ground is badly overgrown and there is the remains of an old font amongst the vegetation. The South gable fares better and has a nice window mostly intact. Having viewed the ruins I scoured the area to locate the castle tower. It turns out to be approximately where the North gable would have stood. A lot of overgrowth hides it from view but I could partially see a section higher up. I then spotted at ground level part of the West wall and a small doorway. I broke away some of the dried branch twigs that occluded the entrance and had to climb over a small fallen tree trunk. Within, ivy was curling about but there was a narrow set of stone steps spiralling upward. I managed to get inside the doorway and carefully ascended the steps which were coated in lichen managing to reach a flat area that must have been the first floor. The stairway was really narrow and the steps badly worn but I at least got part ways into the interior. I figured there wasn’t much likelihood of any further steps as I could see daylight above. It really is very hard to discern what is left of the tower but I’m glad I at least got inside.
The site of the ruins is to the side of a narrow country road where passing traffic is frequent as it leads to Straffan and back to the N4. Also there are almost no places to safely park. I managed after a few drives up and down the stretch of road to eventually tuck the car in on a very small grass verge a few yards North of the entrance stile.


To find the ruins take the N4 heading West and exit at junction 7 signposted for Straffan. At the top of the exit ramp circle the roundabout and cross the bridge over the N4 and on the roundabout on the other side take the first exit again signposted for Straffan. Continue down this road and turn right at the next roundabout onto Straffan road. Continue driving on this road for approx. 4.5km until you have crossed over two hump back bridges (one the canal the other the rail line) Approx 250m after the second bridge look carefully for the gate and stile in the hedgerows on your right. As mentioned parking is difficult but there is a small grass verge just past the entrance on the same side which may be your best bet.
Posted by Castlehunter at 20:32 No comments: