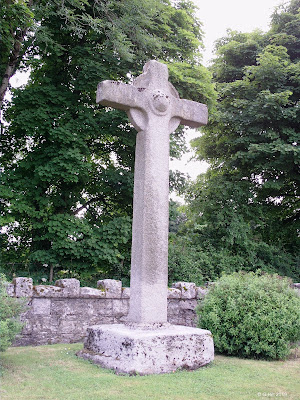 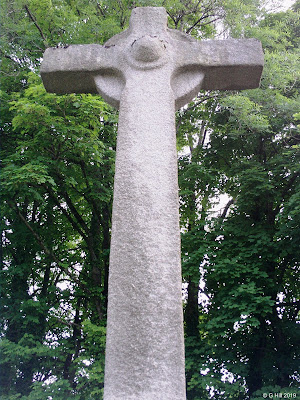 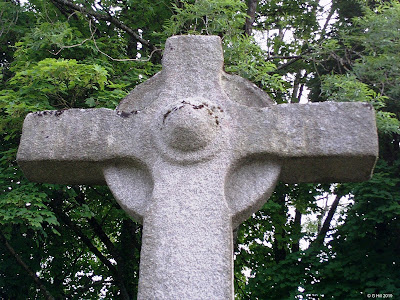 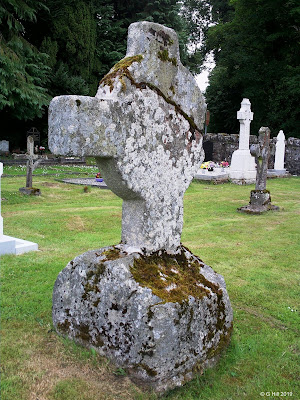 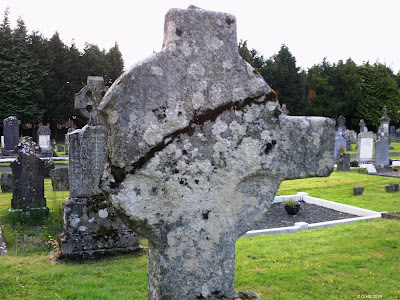 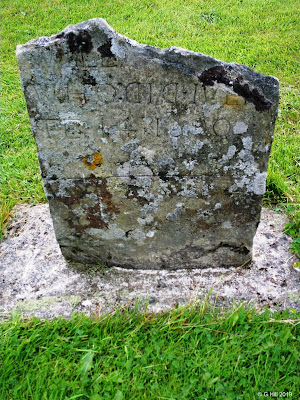 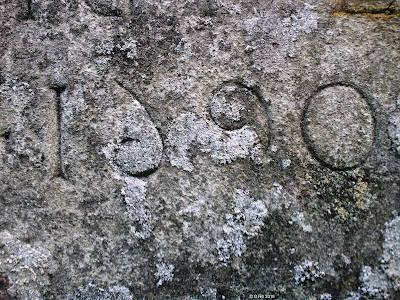 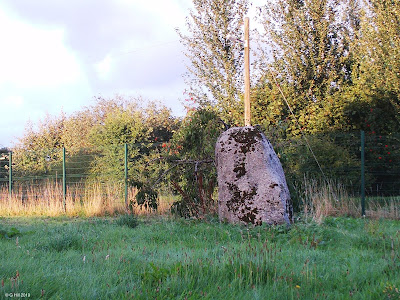 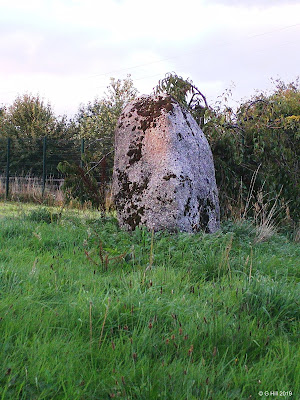 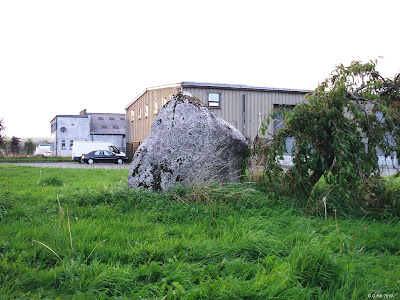 At one time there was a medieval church and castle at Burgage More near Blessington in Co. Wicklow. Whereas partial remains of the castle remain (see earlier post here) only small fragments of the church remain. In the 1940's the area was flooded to create a reservoir and so some historical items were removed from the site and relocated to the Burgage cemetery near to Blessington.
Among the items were two early stone crosses. The first known as St Mark's cross or previously St. Boaitin's cross is situated at the Southern boundary wall of the cemetery..Unlike many Celtic style crosses it does not have the quarter piercings in the ring around the arms.It stands approx fourteen feet high and has a weather worn inscription which appears to be in old Gaelic. It is composed of granite and stands tall and slender and appealing to the eye.
The second cross which is a few metres adjacent to the first also has no perforations in the ring and it stands approx four and a half feet high. Similar to St Mark's cross the arms are quite wide but on this cross one of the arms is missing. Apparently local folklore tells of a man who broke off the arm but it fell upon him sinking him permanently into the ground!
The crosses were not the only items saved from Burgage More. Many old gravestones were removed to preserve the memory of those buried there and these were randomly placed in the new cemetery. Amongst these as pictured above is a gravestone marked 1690. This has to be the oldest legible one that I have come across on our travels. On closer inspection it appears to be dated July 14th 1690 as the date of death but only the first four letters of the name are visible and they are WILL.
The cemetery and nearby castle remains are very interesting to visit. As a matter of interest if you leave the cemetery by its main gate and turn left and travel to the second turn left along this road (Troopersfield) in the grounds of a factory near the perimeter fence on the North West corner of the junction is an ancient standing stone. Initially it took a little while to find it but we eventually did. It appears to stand between four and five feet high with a slight tilt.
To find the high crosses take the N81 from Dublin to Blessington. Just past the main street there is a left turn onto Troopersfield (L8858). Turn onto this road and continue for approx 700m and you will see the cemetery on your right. There is a small area to park outside. If you continue on past the cemetery you will eventually reach the the end of the road where a 7 or 8 minute walk will across a field to the shore and Burgage castle
Posted by Castlehunter at 17:39 4 comments: 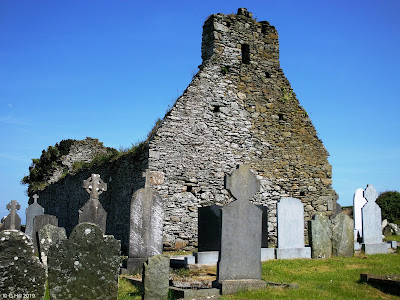 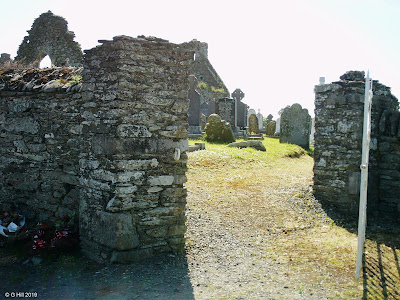 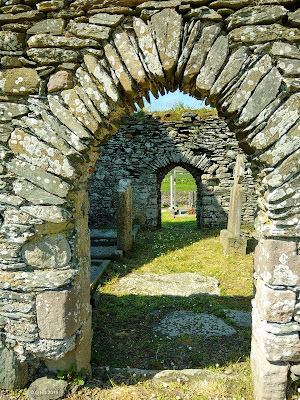 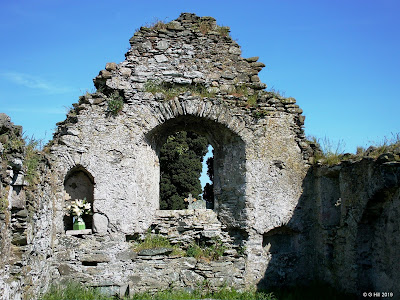 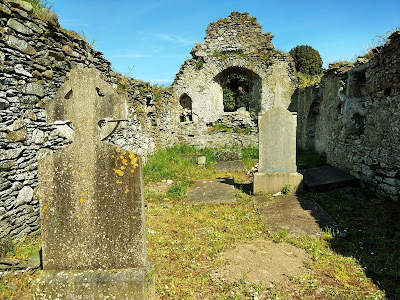 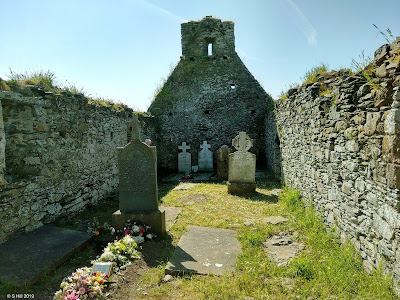 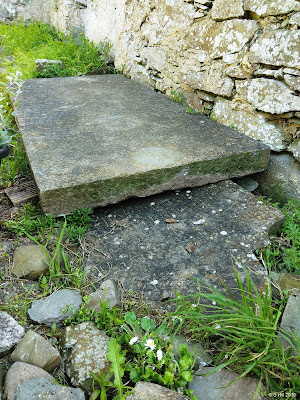 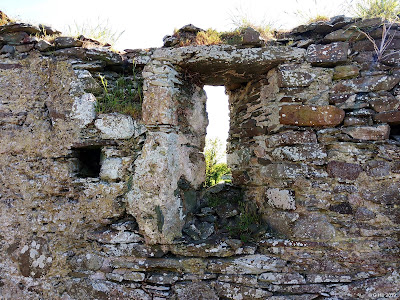 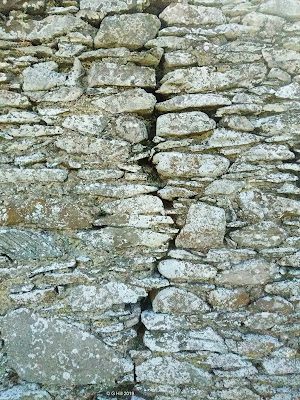 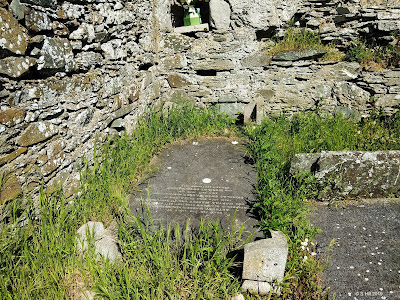 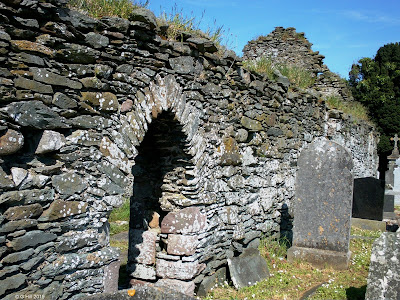 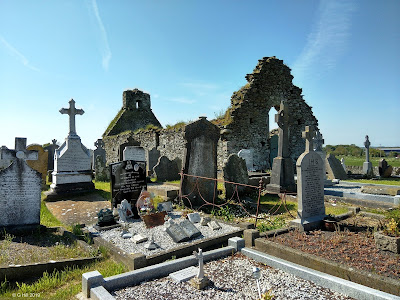 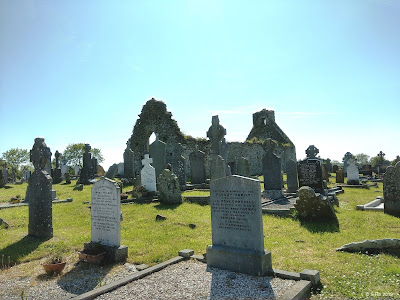 We came across this nice little ruin on a narrow lane just North West of the picturesque fishing village of Clogherhead in County Louth,
There is not a lot of information  available regarding the ruins other than it is known as "Mayne Church" and that it dates from the late medieval period. It is a simple nave and chancel structure and all four walls are standing, The west wall has an extension for a belfry while the East gable has a single large arched window, There are doorways in both the North and South walls.
Within the ruins the space has been used as consecrated burial ground with a number of large grave slabs one of which is a Priest's grave memorial positioned near the West wall and is inscribed to the memory of Reverend James Corigan. It is dated November 23rd 1795. Apparently Faulkner's Dublin Journal in March of 1793 reported that a certain Fr Corigan was thought to be holding weapons in a hay haggard for distribution to locals in the event of a rebellion, Whether this was the same man buried in Mayne we can only speculate,
There aren't many other features within the church apart from a couple of small alcoves in the walls and the presence of a small Motte in the field beyond the Southern boundary wall of the graveyard but it is nonetheless worth a visit to this ruin if in the area.
To find the ruin take the R166 from Drogheda and drive for 8KM to Termonfeckin. Follow the R166 through Termonfeckin until you reach a crossroads the other side of the village. Take the right hand turn for Clogherhead again following the R166. After 5KM you will reach Clogherhead. Follow the R166 through the village and a short distance out of the village you will pass a crossroads with St Michael's Church on your right. Continue straight on passing a local road the L6279 on your left then  250m further there is a narrow lane that leads up to the ruins. You can park outside the entrance gate..
Posted by Castlehunter at 16:53 5 comments: