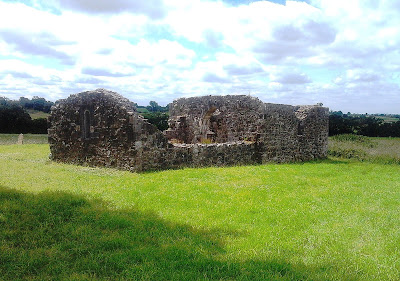 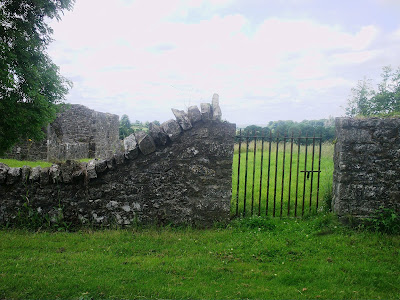 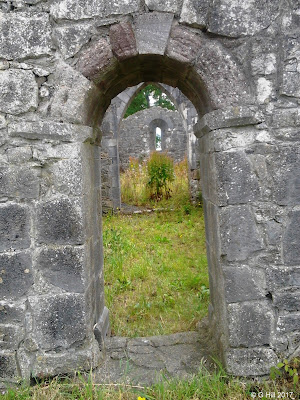 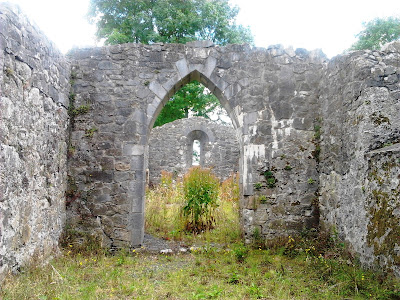 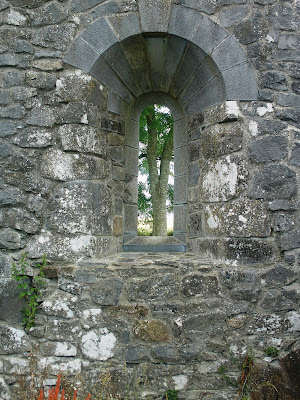 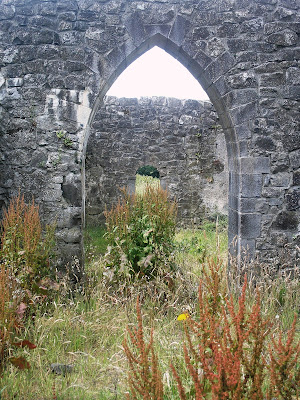 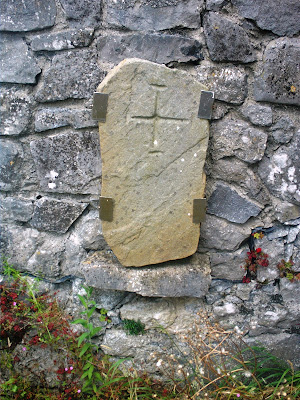 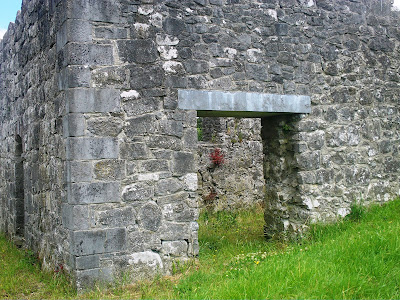 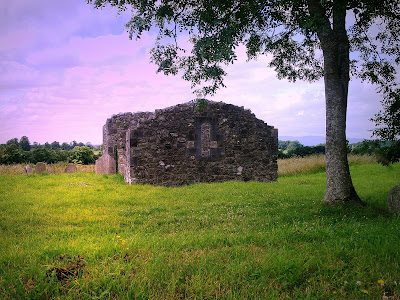 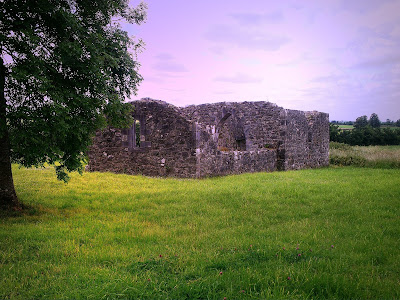 
Posted by Castlehunter at 10:02 No comments: 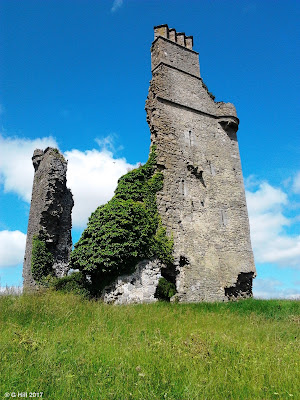 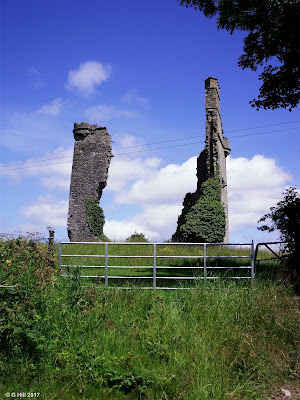 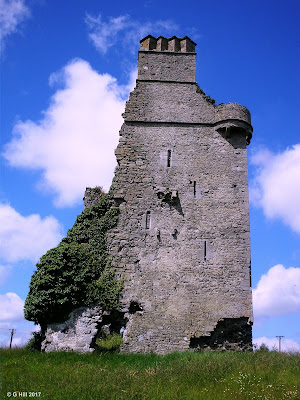 Above Image: Remains of East wall 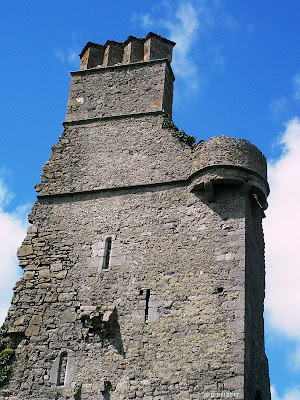 Above Image: View of the North East bartizan 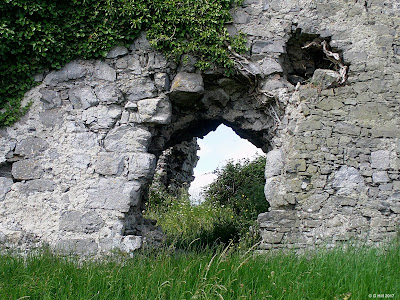 Above Image: Possible remains of an entrance 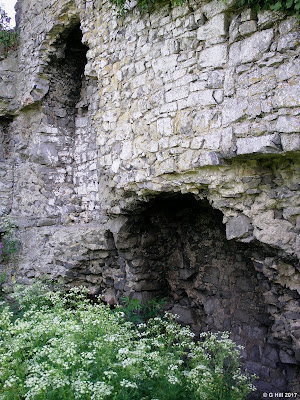 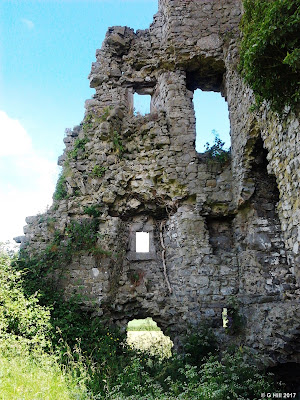 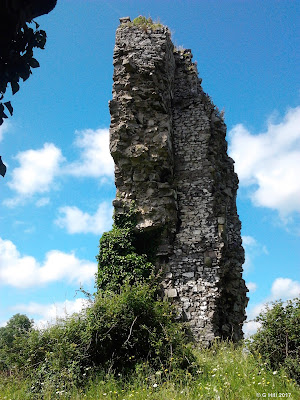 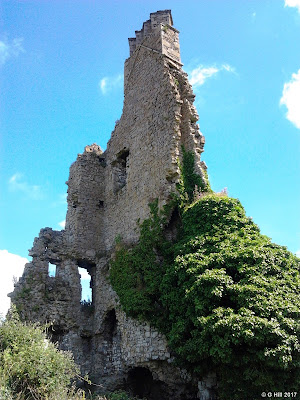 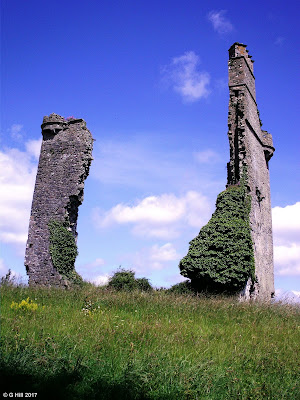 I have passed by this dramatic ruin countless times on the M7 but an opportunity recently afforded me the chance to leave the motorway and find the back roads leading to it.
The castle was a huge late medieval residential tower house built by the Fitzgerald's in 1580. Within 200 years it would be abandoned. It stood four storeys high and had semi-circular bartizans on each corner. Several fireplaces on some levels were represented at roof level by four huge chimneys which are still extant.The castle came under attack by Cromwell's forces in 1641 and was forfeited.but eventually returned to the Fitzgerald's in 1660. One oft told tale recounted in depth by Sir Jonah Barrington in his volumes "Personal sketches of his own times"published in 1830 was that of Elizabeth Fitzgerald who in 1690 found herself besieged in the castle by the O'Cahills who had managed to take her husband hostage and threatened his life if she did not render the castle to them. Staunchly defiant Elizabeth proclaimed "Elizabeth Fitzgerald may get another husband but Elizabeth Fitzgerald may not get another castle; so I'll keep what I have; and if you don't get off faster than your legs can readily carry you, my warders will try which is hardest, your skull or a stone bullet" The castle remained intact and in her possession but her unfortunate husband found himself dangling from a gibbet!
An illustration by Francis Grose from his antiquarian tour of Ireland in 1791 depicts the castle in ruins with all walls standing but the roof missing. What caused the massive crumbling that has taken place over the last 200 years is debatable but it has left two tall shards jutting upwards to the sky. The remains existing today consist of about two thirds of the East wall and North East bartizan, a small portion of the North wall and the corner of the South and West walls with its bartizan.
Back to the visit. We found that the ruins were in fact built upon a rocky outcrop that was now on private land. A Nicely built modern house stood in front of them. When we arrived we planned to simply knock on the door and seek permission as there were "No trespassing" signs on the pillars of the entry lane that led to the rear of the house. To further upset our plans there were several temporary signs placed directing traffic towards a funeral gathering it would seem at the house..Bad timing for a visit it would appear. However we did get an answer at the door by a very charming lady who dressed in black and heading for the said funeral still graciously allowed us entry to view the ruins as she said herself that she had a great interest in things historical.
Up the lane way to the right of the house we found a field gate which was unlocked and access was easy. The ground within is overgrown and slopes downward from the ruin.The surrounds showed several signs of dislodged rock from the castle walls so we took some very careful steps on our ascent to reach the interior. Standing within you could really get a sense of the original size of this castle and how strategically it was placed..Remnants of the fireplaces and even an oven area are still visible but the features have been ravaged by time. A nearby castle at Coolbanagher which had been a similar tall strong tower almost totally collapsed during a bad storm in 2014 and was eventually demolished. How Morett in its current state survived that storm is a puzzle but there you have it, the fickle hand of fate. That aside I feel that unfortunately time will eventually take its toll and we will sadly lose this striking structure from the landscape..
To find the ruins head West on the M7 and take the junction 15 exit signposted for Mountmellick. At the top of the exit ramp take the right hand exit of the roundabout which crosses back over the M7. Go straight through the roundabout on the other side and at the subsequent roundabout turn left again following the sign for Mountmellick. Approx 250m on you will reach another roundabout which you go straight through. Drive for approx. 1.3KM and you will reach a left hand turn. Turn left and after you have crossed over the motorway again take the second left hand turn. This is a Cul-de-Sac with a modern house on the left at the top. You can park here and seek permission for entry to the ruins at the house.   . .