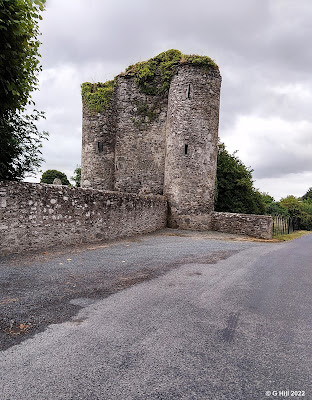 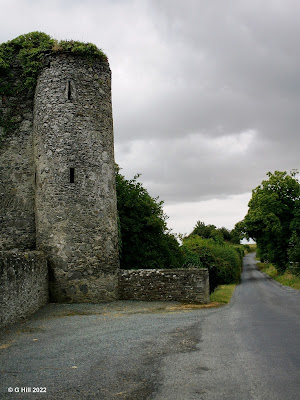 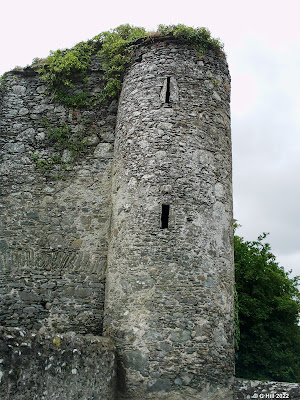 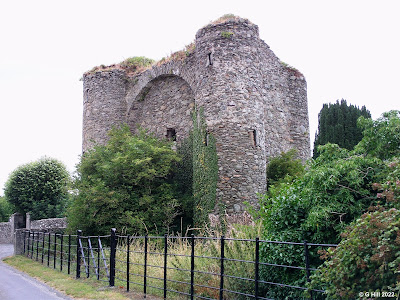 Above Image: West and South walls 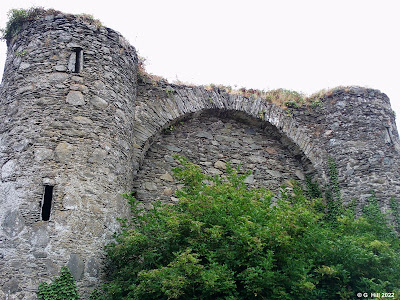 Above Image: West doorway blocked up behind bushes 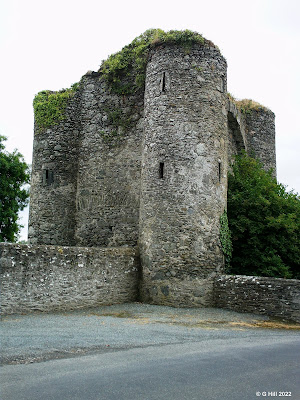 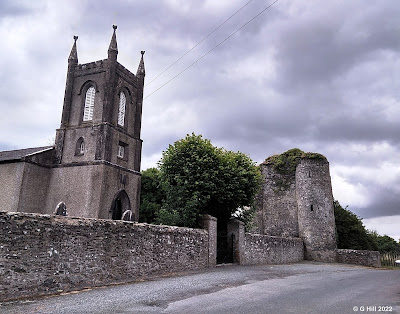 An impressive ruin on a country road in Haynestown Co. Louth, this more unusual looking castle is believed to date to the 16th century. It stands three storeys high with its main entrance now blocked up and situated on the ground level of the West side. A secondary entrance is also blocked up on the East side. Its main feature are the four large circular corner turrets two of which seem somewhat larger than the others and are on the West side. The original owners of the castle remain unknown and believe me I did my best to find out who they were but to no avail. The castle still appeared to be in use in 1784 as an antique print I came across depicts it with a wooden door and also a set of steps in the West side of the Northwest turret leading to a turret door. The turrets on the Northwest and Northeast appear on the print to be shown as degrading at that point so it may be a case of a slow decline into ruination over subsequent years. The 1837 Ordnance Survey map states that it is definitely in ruin by that time. Lewis's Topographical Dictionary of the same year describes the Castle details perfectly under the slightly different townland name of Heynestown but lists the name as Dunmahon Castle which in fact has squared turrets not circular and is a short distance away on private land near Gibstown.

Overgrown vegetation seems to have been the castle's worst enemy in latter years and although cleaned away previously it now appears to be gaining hold again. The turrets all appear to have lost some height over the centuries. I noted on our visit that this castle which contains a spiral stairs within would be a really good project for renovation, at least to the standard of unblocking the entrance, placing gravel ground inside and giving public access to see the interior and perhaps climb to the top of what is left of the Southeast turret.

The castle is adjacent to a Church of Ireland church built in 1803 and renamed from St. Nicholas' to St. Paul's when it was renovated in 1827. The location of both castle and church are on a small country road which was almost devoid of any passing traffic, at least while we were there. I attempted to navigate the base of the castle but was thwarted by the ever growing bushes. It still surprises me how many castle ruins are secreted away on country lanes but this one is worth seeking out and perhaps a further clean up may expose more of its features,

To find the ruins take the junction 16 exit of the M1 motorway and take the exit for the N52 to Dundalk off the roundabout. Drive for approx 220m and take the first left turn onto the L7165. Get into the right hand lane and turn right at the T-junction. This is a small loop road that takes you back onto the N52 so that you can access the next road you need which is across the dual carriageway. Turn right back onto the N52 and then a few metres further on turn left onto the continuation of the L7165 signposted for Haynestown. Drive approx 400m until you cross a small bridge over the rail line and turn right at the T- junction beyond it. Continue on for another 500m and straight through the crossroads. The castle and church are approx 320m along on your left hand side. There is ample room to park outside the church.

Posted by Castlehunter at 20:16 No comments: