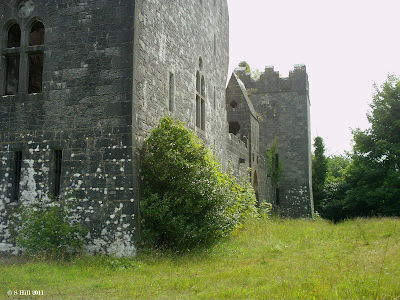 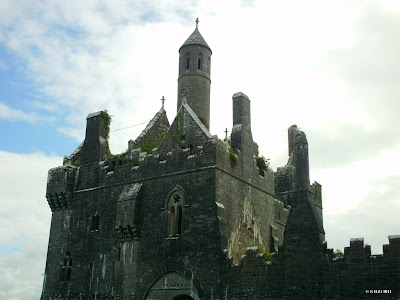 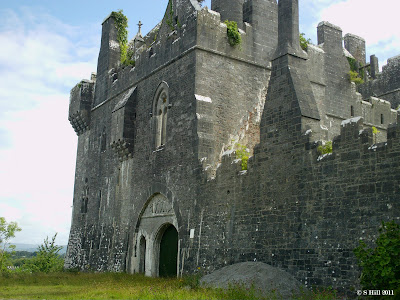 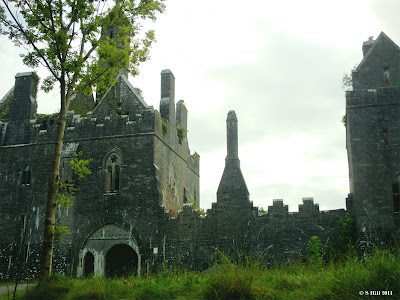 Dromore Castle was designed in the Gothic revival style by Edward William Godwin and built for the Earl of Limerick in the early 1870's. It was abandoned by the family during World War 1 and finally sold in 1939. It's slow descent into decay began in the 1950's when the roof was removed to avoid rates being applied to the building and was later listed for demolition, although thankfully this has not come to pass. The present owners live in a nearby house. The castle achieved some fame in the 1980's when film director Neil Jordan chose it to feature in his ghostly comedy "High Spirits".
It consists of a three storey block, side tower and a round tower to the rear. It is not possible to access the interior but the view of the castle from the outside is breathtaking.
The castle lies on a hill by a lake in a large copse in a forest. When we visited there was a sign on the entrance gate that said private property (which it is) but the gate was open and there is a nice lodge house just inside. We got no answer from the lodge but in the windows were some ghastly looking skulls with candles protruding from the tops (souvenirs from High Spirits perhaps?). We decided to walk up the forest road in the hope of meeting the owners to ask if we could visit the castle but about 10 minutes later we suddenly came out of the woods in full view of the castle itself. It was worth the walk. We had a browse around and took a few photos then decided we had intruded enough. We may have been lucky to get access that day but it's still worth your while to see if you can get permission, you wont be disappointed.
To find Dromore take the N69 out of Limerick toward Askeaton (the site of another ruin! See post here)  After Kildimo look for a right hand turn around Glenameade. it is a narrow road but you will see a gateway on the right with a lodge house. Parking is tight but can be done easily enough.
Posted by Castlehunter at 21:16