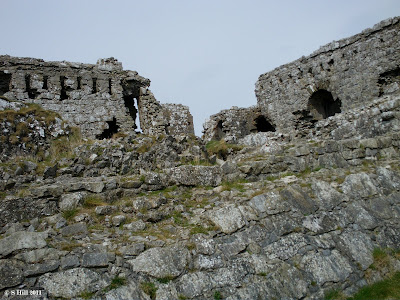 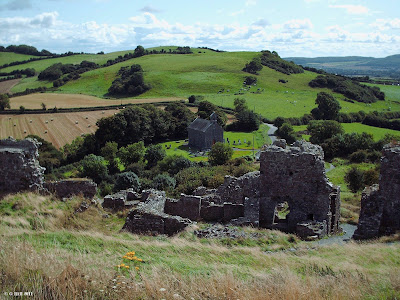 Above Image: The picturesque view of Holy Trinity Church
from The Rock 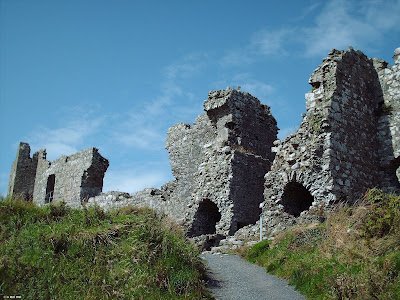 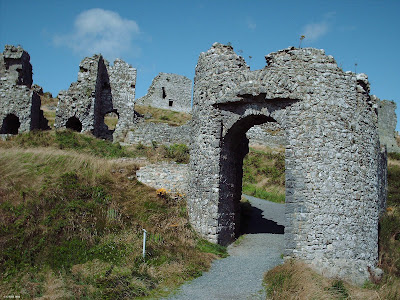 Above Image: The Barbican gate. 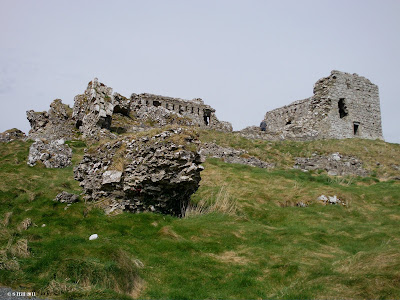 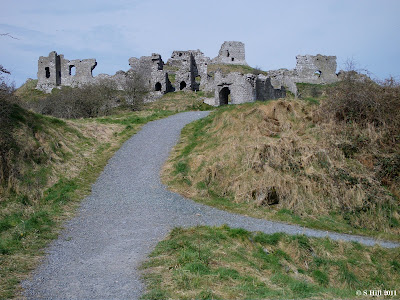 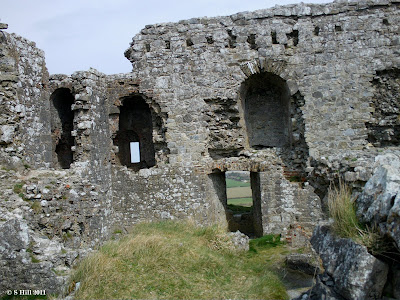 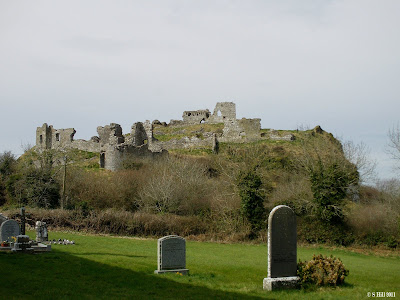 Above Image: The Rock of Dunamase viewed from
Holy Trinity Churchyard 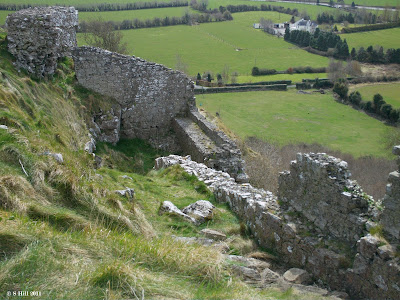 One of the treasures of Co. Laois has to be Dunamase. The Rock while not as high as Cashel still stands majestically at 150 feet above ground. There have been fortifications there since at least the 9th century but the existing castle ruins were first built in the late 12th century as a McMurrough stronghold. It is believed to have been passed on to "Strongbow" and then to William Marshall. The castle was in the hands of the Marshall family until it fell into ruin in 1350 because it largely remained unoccupied. It was finally blown up and put entirely out of use by Cromwell's forces.
When we first visited Dunamase in the late 1980's it was overgrown with gorse and indistinct. You could park outside but a rocky climb awaited you. Once you found your way up there was little to enjoy while stumbling around in the undergrowth.. However time passed and thanks to the "Celtic Tiger" funds became available. So in 2006 the site was restored for public use by the OPW and a great deal of major excavation work done. Today there are parking facilities outside, wooden steps and paved walkways that lead you directly up to the castle. We have since visited twice, both days in glorious sunshine. The thing is, that because Dunamase is somewhat off the beaten track, you can almost have the place to yourself.
The ruin itself consists of a lower Barbican & gate, a curtain wall, lower ward and finally an upper ward and remains of a great hall. When you enter the Barbican gate you are given the choice of turning either left or right. Whichever path you choose you will still circumnavigate the castle. Beware at the rear there is a very deep gully so keep to the path..There is also a lot of debris from collapsed walls in the upper ward but quite safe to move around.
The view from Dunamase is awe inspiring, from the picturesque Holy Trinity Church below to the vast beautiful meadows that surround.You can literally see for miles.
When you finally descend (and you will be reluctant to do so) you will find adjacent to the small car park the aforementioned Holy Trinity Church which has some interesting old stones in the Churchyard. If the gate is locked you can enter by a stone stile in the surrounding wall.
To find The Rock of Dunamase take the M7 from Dublin and exit at Junction 16. You will come to a small roundabout. Take the 2nd exit (called Old road) and continue to drive until you see The Rock to your right. Follow on until you see a right hand turn which will lead you directly to the car park.
Posted by Castlehunter at 17:48