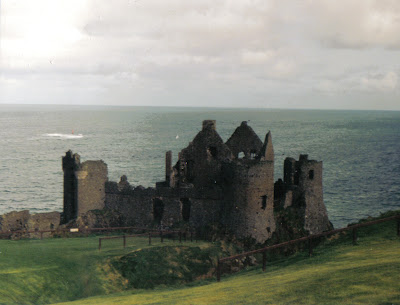 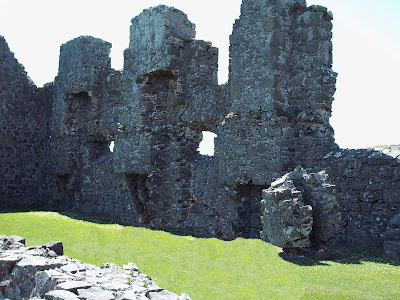 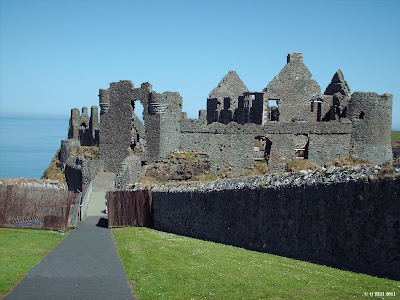 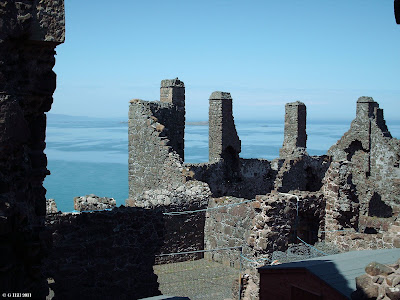 Dunluce Castle stands on a rocky basalt outcrop on the North Antrim coast. It was built by the 2nd Earl of Ulster in the 13th century. The castle throughout it's history had been occupied by both the McQuillan and the MacDonnell clans. The castle is strategically facing seaward and is accessible from the mainland by a bridge over a large deep crevasse. The Spanish galleon "Girona" floundered on the rocks below the castle and its large cannon were salvaged and placed on the gatehouses. During the last occupancy by the MacDonnells the kitchen which was precariously close to the edge crumbled and fell into the sea killing all but one inside. After the Battle of the Boyne the MacDonnells fell into poverty and the castle began it's descent into ruin.
Today the castle stands as a majestic ruin, one of the best to be seen in Ireland. We have been there twice and I would'nt hesitate to go again.There are so many places to walk around and so many breathtaking views of the coastline from the steep battlements especially on a fine day, that you will find yourself spending hours there. There is a small entrance fee of around £2 for adults or £1 for children and there is parking available on the road outside the castle. While in the area, don't forget to check out the Giants Causeway and the Carrick-a-Rede Bridge.
To get to Dunluce take the A2 from Portrush towards Bushmills (visit the distillery!). At Ballytober Crossroads take a left and you will find the castle along this road.
Posted by Castlehunter at 13:27