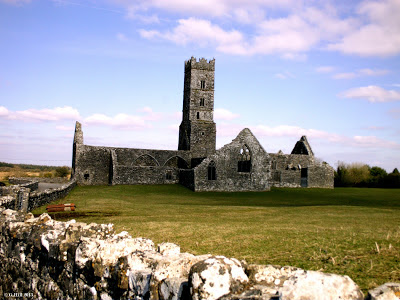 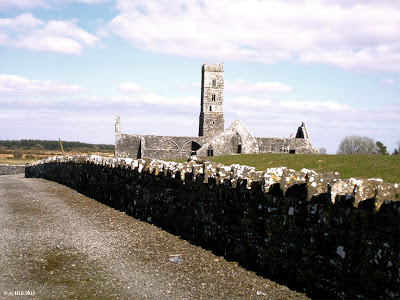 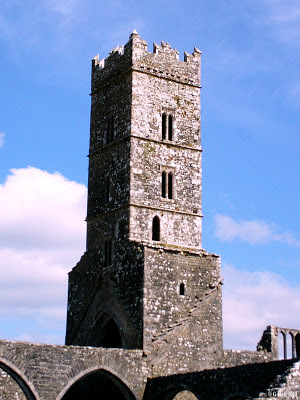 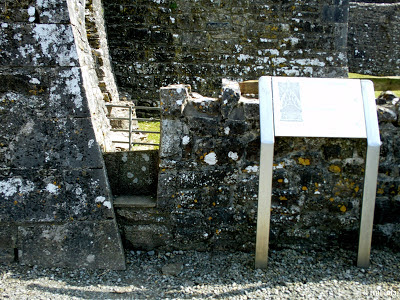 Above Image: The inner boundary stile 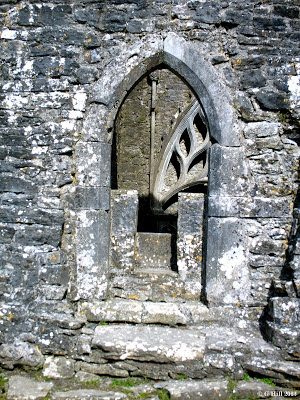 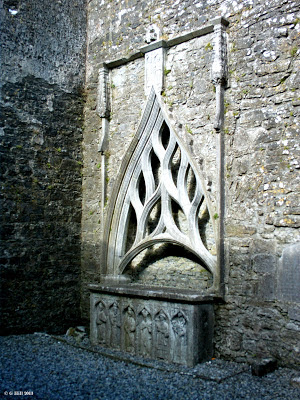 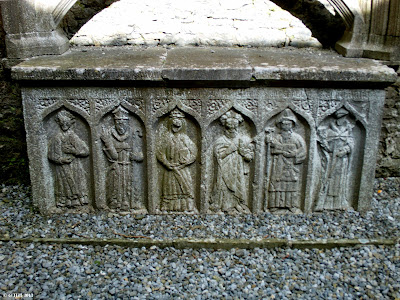 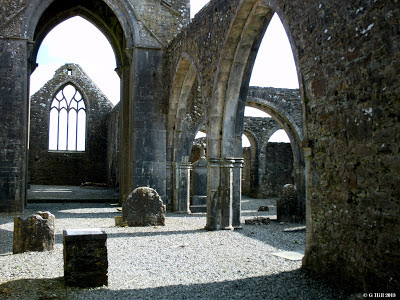 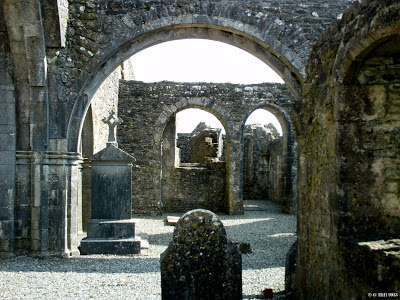 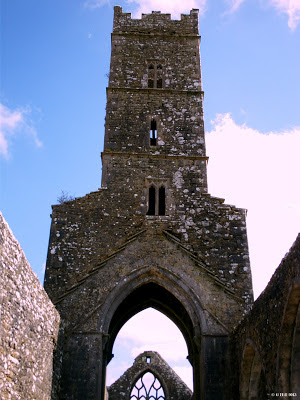 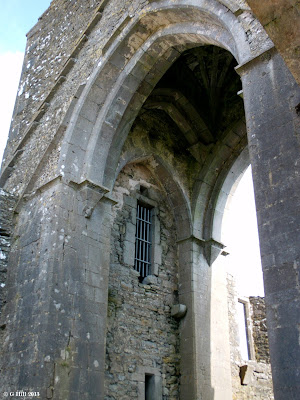 Above Image: Gated off entrance to the tower 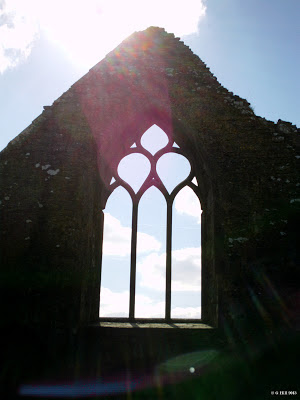 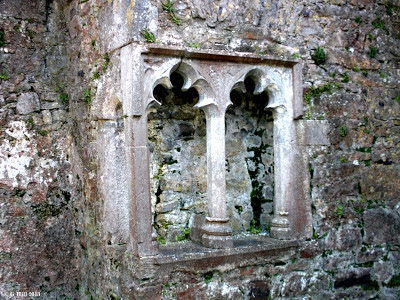 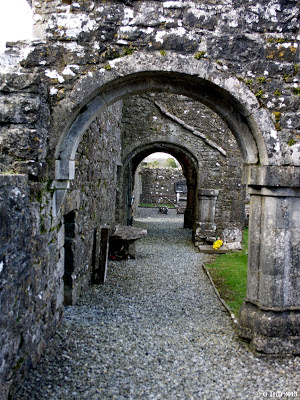 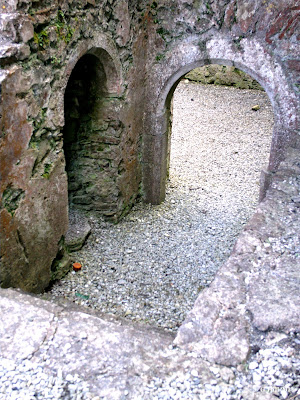 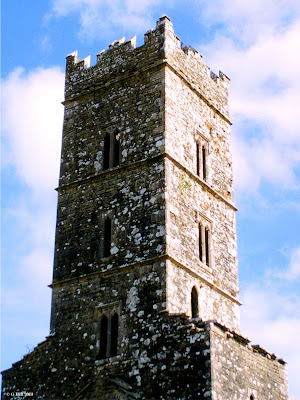 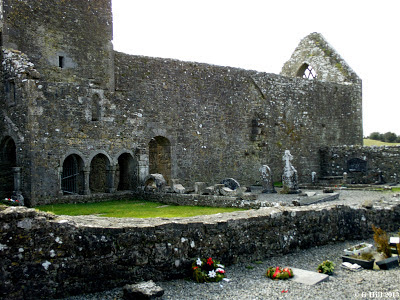 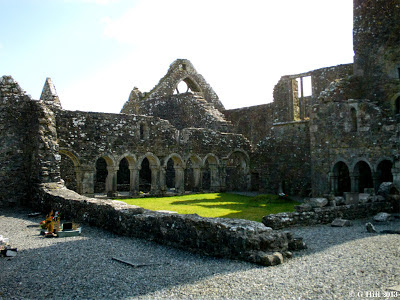 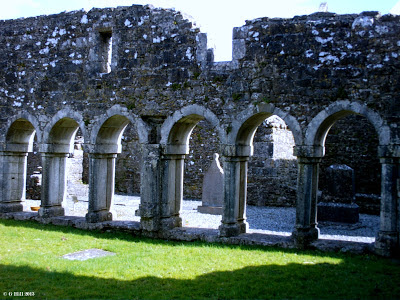 Above 3 Images: Views of the cloister 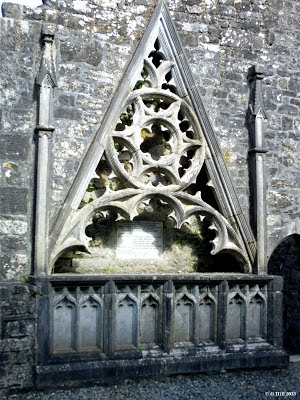 Above Image: A second ornate tomb 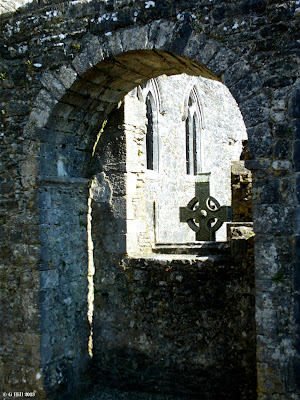 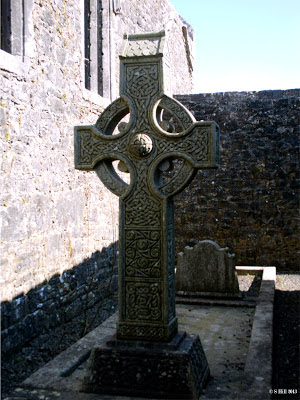 Above 2 Images: The hidden cross 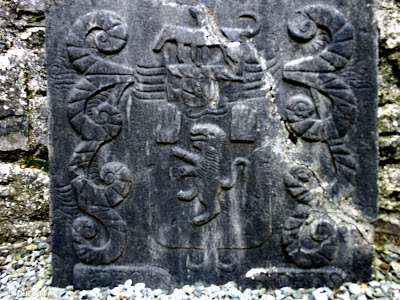 Above Image: Some decorative carvings 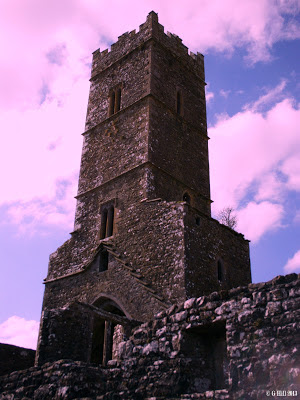 This magnificent Abbey was founded for the Franciscans in1353 by William O'Kelly, Lord of Ui Maine on the site of an earlier but non extant monastery founded by St Conall in the 6th century.
Kilconnell Abbey surprisingly survived through the reformation when it was held by the Crown and somehow evaded dissolution. It also came under attack by Cromwellian forces in 1650 but was defended by Major O'Daly. The monks left the Abbey in the 1690's as vocations to the order slackened, though the Church remained in use for some years until the site was finally left uninhabited in the 1780's. Although it has fallen into ruin it has had guardianship and in more recent times been taken into state care who keep the ruins generally well kept.
Whole visiting nearby Clontuskert Abbey (See earlier post here) we took some time out to visit these impressive ruins which lay just a few miles away.
The ruins lie in a field locally referred to as Abbeyfield on the North end of the quiet village of Kilconnell and are accessed by way of a stile in the outer field wall adjacent to a gate. There is a gravelled pathway that leads up to the ruins and then another stile in an inner boundary wall just beside a sign posted for information.
As you approach the Abbey the great Tower looms above you and is singly the most dramatic feature of this site. On crossing the second stile there is a doorway immediately on your left with believe it or not another stile to navigate!
The first thing that greets you when you enter is a large tomb against the opposite wall. It is highly decorative with a tall ornamental hood above it and carvings of mourning figures on its base. There is another tomb further down the nave that has an amazing carved pyramid shaped hood. Sweeping arches and numerous medieval carvings adorn the Church and it is a joy to wander around.
This site is really big. It consists of the Chancel, Nave, Choir, Aisle and a Transept on the Southern side. There are also some domestic quarters. Originally the site would have consisted of the Nave and Chancel only with the addition of a Tower and Transept being made later.
In the Northern section is the Cloister or Ambulatory where Monks would have strolled in prayer or reflection. Many of the Cloister arches are still present. It is adjacent to this area where you find the domestic buildings and the guardians house. There a lot of nooks and crannies here to be explored and we spent more than an hour doing so. We could spot the top of a huge and beautifully decorated high cross through a gap in the wall just off the nave but there didn't seem to be any way of accessing it apart from climbing up and viewing it through the gap in the wall. It is marking a grave but it is odd that it has been sealed away from public view. We visited in March and the ruins were pretty much deserted but I wonder with Kilconnell's slightly out of the way location if it actually gets any big influx of visitors at all. That aside it is well worth your time to stop and take in the grandeur of these ruins.
To find the Abbey take the Junction 15 exit from the M6 Dublin to Galway motorway. Turn right on the top of the exit ramp and cross over the motorway. Go straight through the roundabout on the other side and on the roundabout following that take the left turn onto the R446. Drive for approx. 2KM until you reach a right hand turn onto the L3412 with a sign pointing towards Ahascragh. Continue on this road until you reach a crossroads with the R348. You will see a sign pointing left for Kilconnell. Drive for approx. 7KM and when you enter the village continue until you see Broderick's Pub on your left. Directly across from the pub is a right hand turn onto the L17423. Go down this road for a few metres and you will see a small parking area on the right. You will see the Abbey in the field beyond. Walk back towards the pub and at the junction you will see a small lane way on your left which leads to the entrance gate and stile for the Abbey.