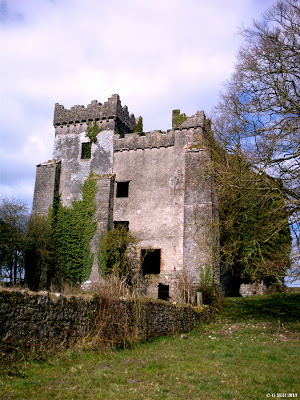 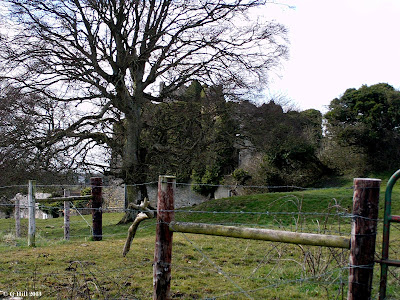 Above Image: The meadow entrance 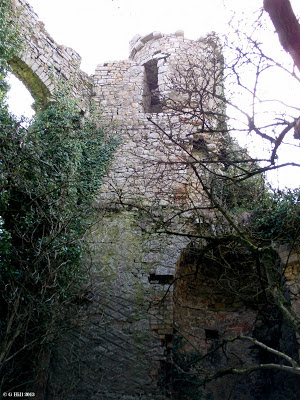 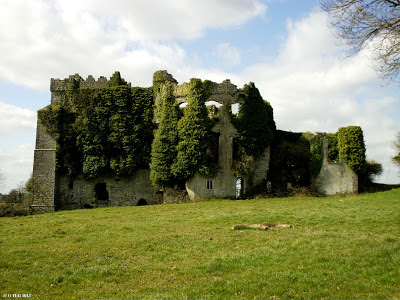 Above Image: The East facing view 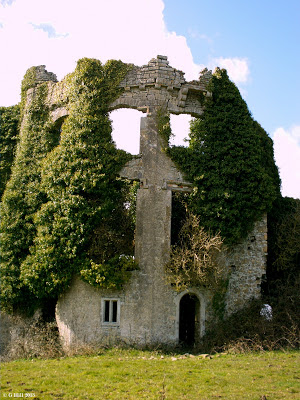 Above Image: The Bow Projection 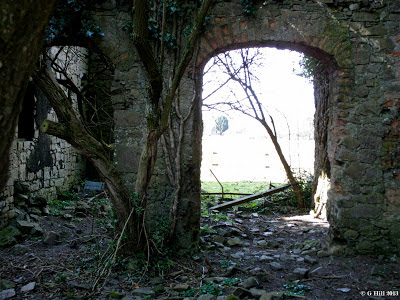 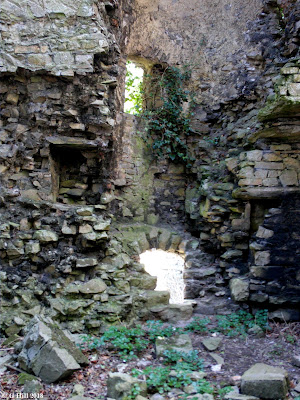 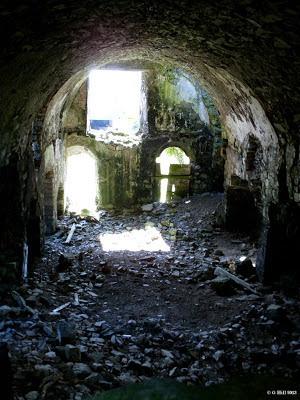 Above Image: The Vaulted ground floor 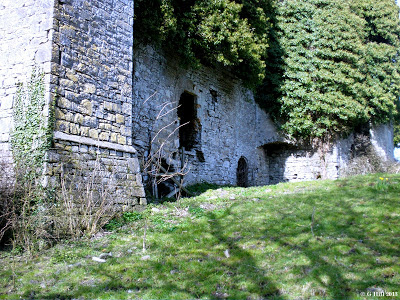 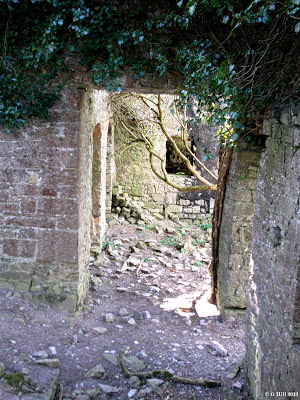 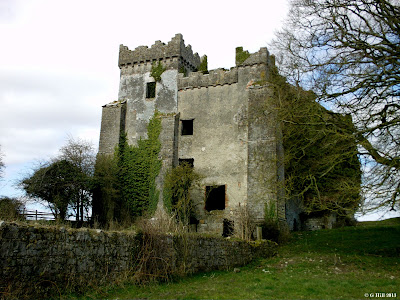 Above Image: The South facing view with original tower

The Castle of Tremblestown or Trimblestown as it was formerly known is a four storied tower house built in the 1400's by the Barnewell family. In the 1700's a huge three storied mansion was added and further additions such as crenellations were made to the building in the 1800's making it a distinctively decorative abode.
The great house was surrounded by landscaped gardens containing many exotic flora and fauna many acquired by the well travelled 12th Lord. This very fine and ornate estate was abandoned by 1900 and subsequently fell into ruin.
I have wanted to visit this Castle for ages but its location on farmland and away from any roads made it elusive. Then by happenstance one day I discovered on a map what looked to be a lane way leading from the Kildalkey road near abouts to the location of the Castle.
On reaching Kildalkey road just outside of Trim we found that the lane had a large gate swung open as there were several houses just beyond and this would be their access point. We were able to drive about halfway up the lane before it suddenly became more of a track so we abandoned the car and continued on foot. We could see the silhouette of the Castle in the distance.
It took us about 15 minutes to pass through two more open field gates until we finally reached a closed gate at a meadow and here visible at about 100 metres away was the Castle. Looking back at the track that we had travelled it looked to a conduit for moving cattle from one field to another but there were no cows or indeed people around. The absence of any prohibitive signs made our minds up quickly that we would push on. We found the last gate unlocked and so entered closing it behind us.
Tremblestown must have been a wonderful building in its time. The grandiose bow projection window on the East side is definitely its most dominant feature. This must have streamed plentiful daylight into its rooms and hallways in the morning time. Now it is partially covered by ivy clogging up the window openings.
We found a way in through a doorway under the great window and this brought us into what appears to be a loft area sitting just above the ground level with its huge barrel vaulted ceiling. There is no access to any other upper levels, any stairs now disappeared and there is a lot of rubble strewn about with tree branches winding their way through the loft. I got a great sense of sadness here, a fine house so recently left abandoned to decay. I'm not sure why this was but perhaps somebody reading might know more.
The interior offered little more to us and looked a bit unstable in parts, but it was a joy to walk around the exterior with its tall tower still standing proudly. To the South and East the land sweeps downward from the Castle to the Tremblestown river, a tributary of the great Boyne river which irrigates the area.
We stayed as long as we dared but I still felt that somehow we were trespassing so we quit while we were ahead. I'm glad we got a chance to view this once great house which even today in its ruinous state is still quite striking.
To find Tremblestown Castle take the Kildalkey road out of Trim and drive for approx. 1.5km. You will pass the entrance on your right to the Glebe golf course. About 1km further take the 2nd right hand turn which is the lane way leading to the Castle. This lane forks at a diagonal from the road. You can drive up part of the way or park at the lane entrance (leaving room for access) and continue on foot. From here it would take about 25 minutes to reach the Castle.
Posted by Castlehunter at 12:57