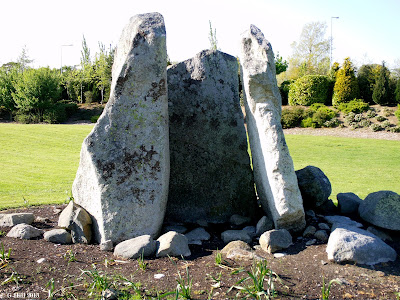 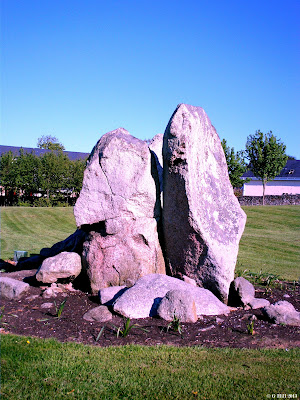 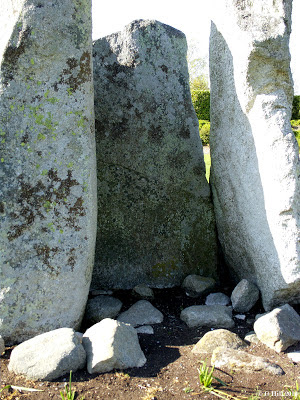 Above Image: Close up of the interior 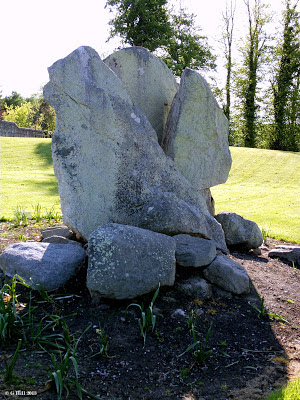 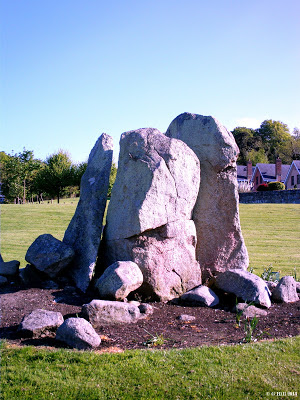 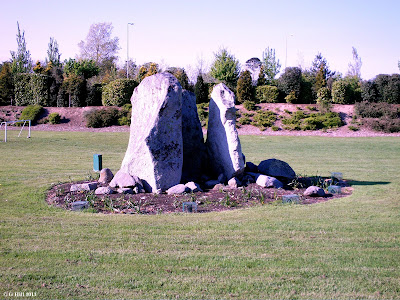 This unusual monument shares a common legend along with The Druid's Judgement Chair in Killiney (see earlier post) that it was the seat of a "Brehon" or "Judge" from which judgements from the laws that governed Ireland in the period leading up to the Norman invasion would be passed. On excavation it was discovered to be a megalithic passage tomb with portal entrance which would date it anywhere between 500BC and 2000BC. If it was indeed the site of a Druids judgement it was most certainly not a chair. Its position and dolmen like features ensure that it was at some point very important and certainly one of the largest tombs of its type. The entrance opening faces South towards the nearby hills and may have been part of some alignment. The rear stone functioned as the portal door to the tomb. The tomb is situated in Taylor's Grange to which this monument is also sometimes referred to and more than likely gave name to the Grange road.
This is a national heritage monument and would originally been surrounded by the huge Glensouthwell demesne but suburban development at the turn of the millennium saw to it that it became a showpiece in a private gated housing development and it now sits in the dead centre of a recreation area.
We tried to visit on a Summer evening last year following the national monument sign but the gates were closed to the estate with only residents gaining access. A bit disappointing then but recently on our way up to Kilmashogue mountain on a Sunday afternoon we found the gates open and so unexpectedly got a chance to get a view of this interesting site. The few residents who were pottering around enjoying the sunshine didn't seem to be put out in any way by our presence.
The Three granite stones each stand about 9 feet tall, closely huddle to each other and do in fact give the impression of being shaped like chair. Even with its close proximity to modernity it still exudes an ancient quality in bucketfuls and probably would be even more effective if it was still in its original state and not surrounded by a flower bed. To be fair it is kept in good condition, not interfered with or defaced though its exclusivity is a little annoying.
With the property boom well and truly doused at the moment we can be thankful at least for now that other accessible historical sites will not be fenced off  from the public by private development.
To locate The Brehon's Chair take the junction 13 exit of The M50 motorway and at the top of the ramp turn left onto the R133 (Grange Road). Drive for approx, 1KM until you see a sign with a left hand turn for the R133 to Stepaside. Turn left and drive until you come to a sort of staggered crossroads. You will see the large white building "Taylor's Three Rock" ahead of you. Drive towards this but be careful as it is actually a right hand turn off the road you have come which itself continues to the left. Once past Taylor's and the M50 overpass take the second right turn into the road signposted Brehon's Chair. If the gates are open you will find the monument a little way down on your right.
Posted by Castlehunter at 17:25