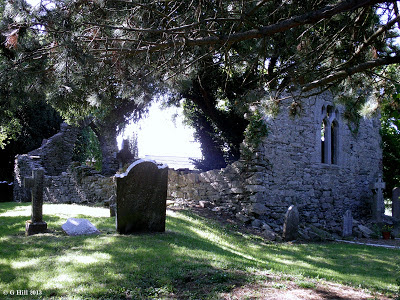 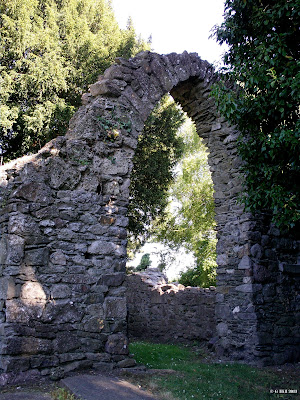 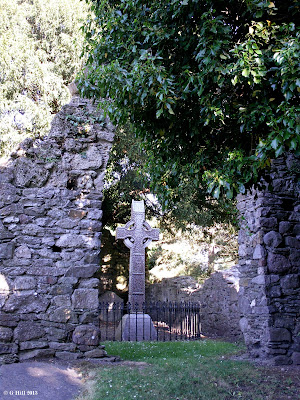 Above Image: The Earl of Mayo memorial 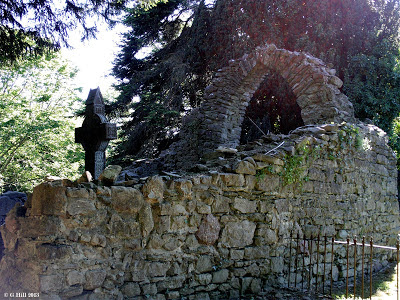 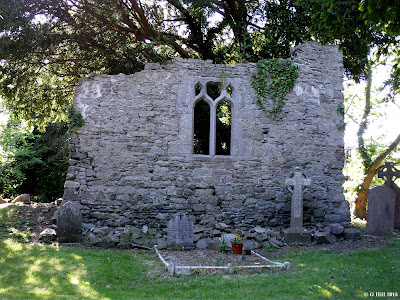 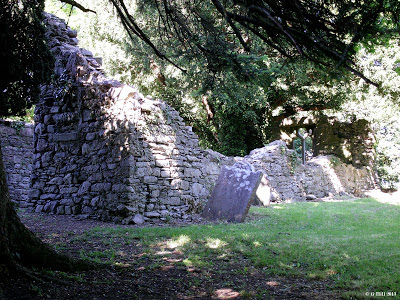 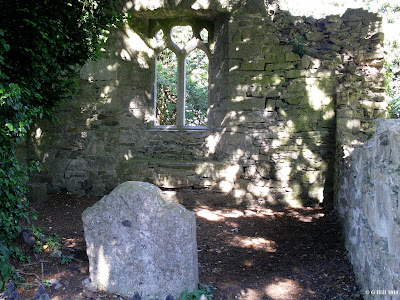 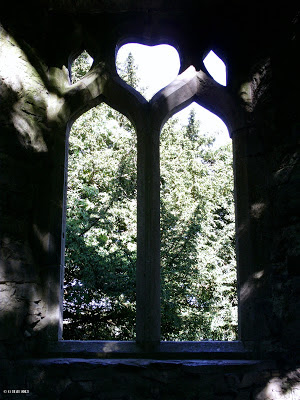 Above Image: The East gable window from within 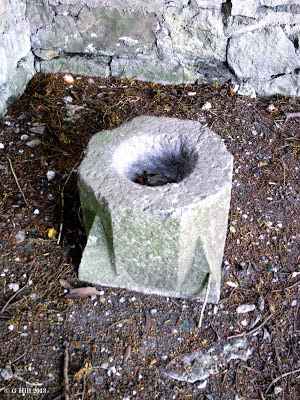 Above Image: The remains of the font 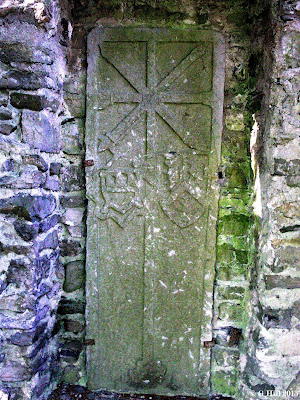 Above Image: The grave slab 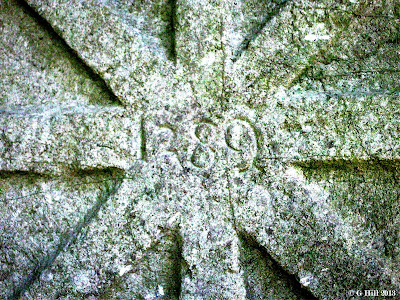 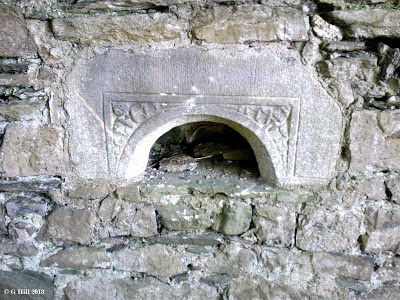 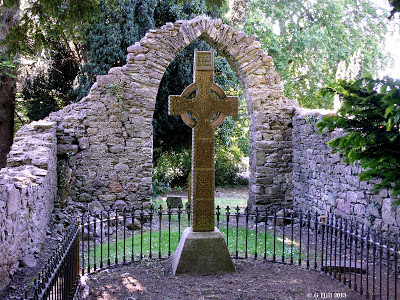 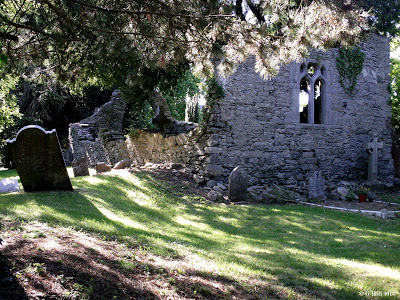 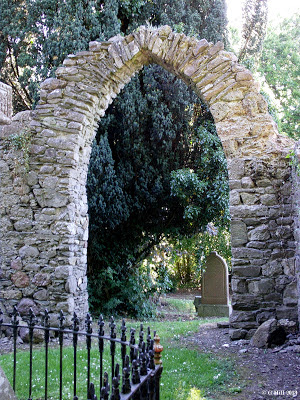 Above Image: The great arch 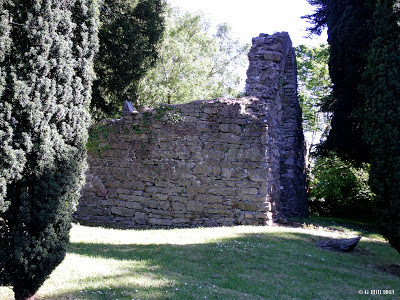 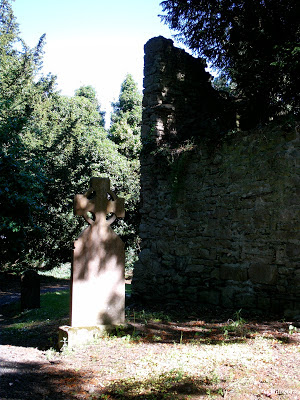 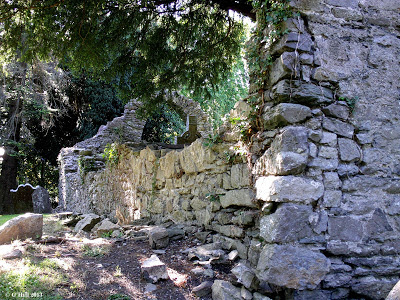 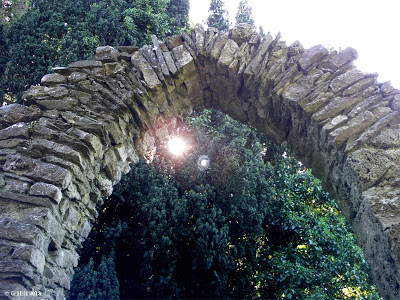 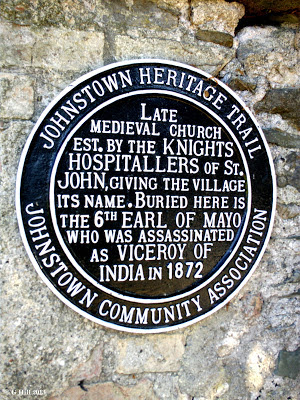 When the Knights Hospitallers settled in Ireland they set about building Abbeys and Churches. This particular one is dedicated to St John of Jerusalem and also gave name to the village in which it is located.
While the date of construction is unknown there is within the Church a grave slab which is said to be dated 1430AD. This would appear to give some indication that the Church would also date from around that time or just before. The Church would have been in use until it fell foul of the dissolution in the 1500's. What remains today are an almost complete East wall, partially upstanding remains of the South and North walls and the large arch on the West. The East gable has a complete and ornate double ogee-headed window.
You can access the walled graveyard in which the ruins stand through an iron gate in the North wall directly opposite the Johnstown Inn. The heritage trail community group have kindly posted an information sign on one of the gate pillars. Inside there is a rough pathway that surrounds the ruins which stand on a grassy mound.
This is a nicely maintained site and is easy to get around. There are many ancient headstones scattered throughout several of which are now leaning at at an almost 45 degree angle.
We paid a visit on a very fine Sunday evening and the sunlight glistened through the mature trees giving a luminosity to the ruins. It is so quiet here that it is hard to believe that a busy motorway lies only a short distance away.
The first thing that greets you is the imposing arch which presumably at some point held a window or a door. It is now a tall slender structure still adjoined at the top attesting to the workmanship involved in its construction.
Within the ruins we found the aforementioned grave slab which is thought to be dated 1430AD. Strangely though it appears to have 1289 engraved on it, maybe somebody can shed some light on that. It bears the coat of arms of the Flatsburys and the Wogans, the Flatsburys being a notable family in the area whose name has all but disappeared now. Directly under the grave slab are the remains of a baptismal font, probably once part of this Church.
Near the tall archway and just within the Church is a tall and very decorative high cross marking the grave of Richard Southwell Bourke, 6th Earl of Mayo. A noted politician he became Viceroy of India in 1869 and on a trip to a penal colony in the Andaman Islands East of India in 1872 was assassinated by one of it's inmates. Legend has it that his body was shipped back on the arduous journey to Ireland preserved in a keg of either vinegar or rum, though I should think the mariners would not have chosen the latter. This circumstance lent to deceased nobleman the unfortunate title of "The Pickled Earl!"
The ruins are well worth a visit and well maintained by a conscientious group of people. To find them, take the N7 from Dublin and exit at junction 8. At the top of the exit ramp take the first exit off the roundabout and drive for approx. 500m. You will see the ruins on your left at the entrance to the village opposite the Johnstown Inn. There are spaces to park by the Church gate.