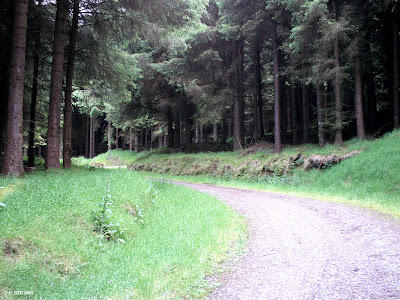 Above Image: The Forest Trail
Below Image: The Track leading to the Site 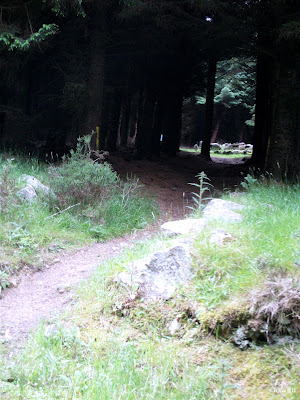 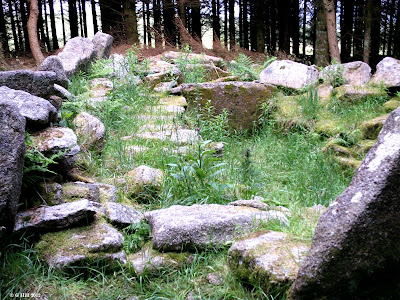 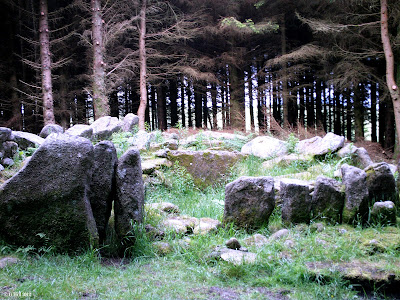 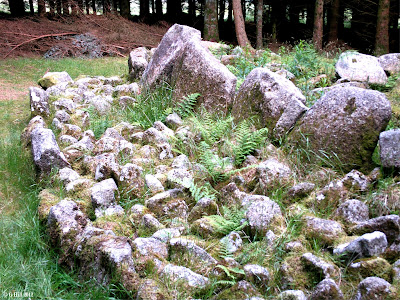 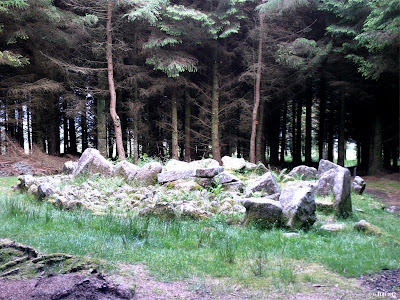 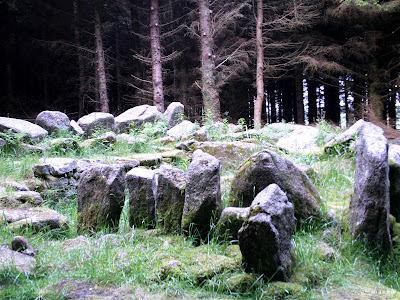 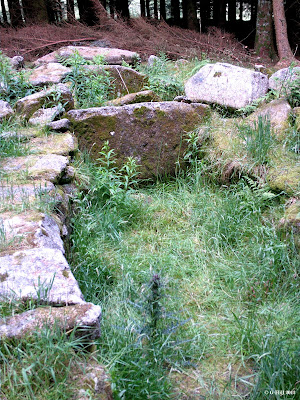 Above Image: The exposed chamber 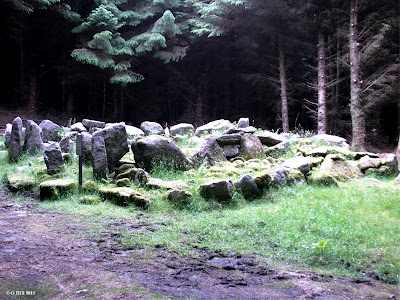 This Neolithic Wedge Tomb is really an incredible sight. Photos just dont give it justice. It needs to be seen in person. It is a rectangular chamber positioned into a wedge shape which had a Cairn constructed upon it. Experts have dated it to the Bronze Age circa 1700BC. It was excavated in 1945 and within they discovered some cremated remains, flint implements and some pottery. The Cairn at one time stood almost two metres high but has now fallen into ruin with the roof of the chamber now missing. Some of the Cairn stones are still scattered among the surrounding standing stones.
The Tomb is known locally as "The Giant's Grave" and is situated in a circular clearing in a pine forest on the lower East slopes of Two rock Mountain. This treasure is hidden away but is so easily accessible on foot that it is incredible that it is not visited more often. Maybe in some ways that is a good thing as it's almost secret spot is devoid of any litter and such that plagues some of the other historical sites that we have visited.
The site is reached by way of a walking trail from a gate on Ballyedmonduff  Road. A sign posted by the gate thanks two local landowners for their co-operation in allowing access across their land.
A short walk across a sheep filled field leads you to a boundary fence with a sturdy ladder type metal stile that is easy to climb and drops you right on the forest trail.
Once over the stile we followed the trail to the left. The trail bypasses a Golf course on it's left and then it bends sharply to the right. It took less than ten minutes to reach this point. Just after the bend and a few yards later on to your right hand side is a small track leading off the trail into the forest. Even from this position we could see the Tomb between the tall trees. The track led us across a narrow gurgling stream with a couple of stepping stones to aid progress and then a few yards later we entered the clearing. On first view this ancient Tomb is truly an amazing sight. The trees had been felled around the perimeter making the glade an almost perfect circle.
Although quite ruinous now the Tomb still looks impressive. We have come across several Cairns & Tombs in the past but this is by far the largest and most interesting. Some of ths standing stones still remain on the North And West sides and it also surprising to see an information board posted nearby.
I have to say we spent a good deal of time here. There was a distinct atmosphere about the place. A real sense of history. To be honest we left the site a little awe-struck.
As with most of our Castle ruin trips, we were the only ones present when we made the visit on a fine June evening. In fact we met only two other people who were out running on the forest trail. We will definitely return to this site in the future.
The easiest route to find the Tomb is as follows: From Kilternan on the R117 towards Enniskerry take a right hand turn at the blue wooden Church onto Ballybetagh Road. Follow this Road around two sharp left bends and about 600 metres along you will reach a fork in the road. Take the right hand fork signposted for Glencullen. After you have passed Johnnie Foxes Pub you will come to a crossroads. Turn right. Drive for about 1.5KM passing Glencullen Golf Course on your left. This is Ballyedmonduff Road. Look out on your left for a Bungalow with a cylindrical bay window and a wire fence posted atop a stone wall. Just a little along this fence you will find a stepped back gate with a track leading up to the forest. There is a small wooden pedestrian gate to the left of the main gate for safe access. We parked to the side of the road just past the gate where it was slightly wider but in general it seems there are few other spots to park.
Posted by Castlehunter at 15:18