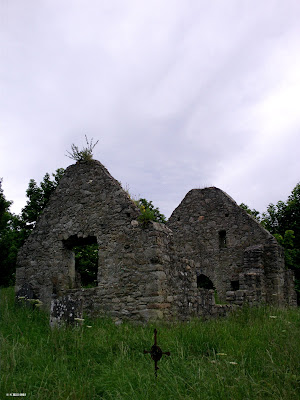 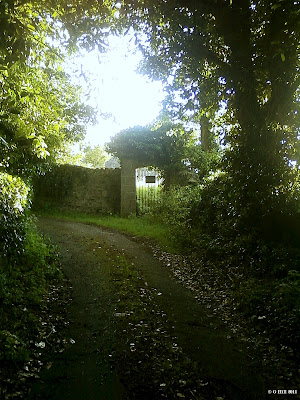 Above Image: The Entrance gate (locked) on a leafy lane 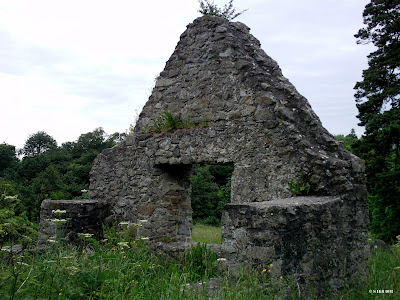 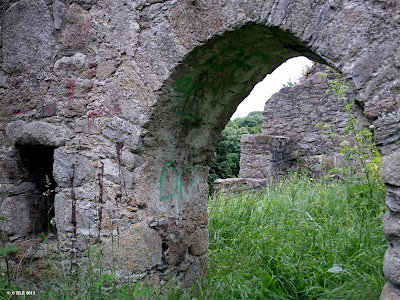 Above Image: The central arch 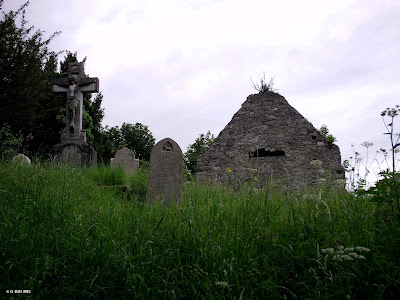 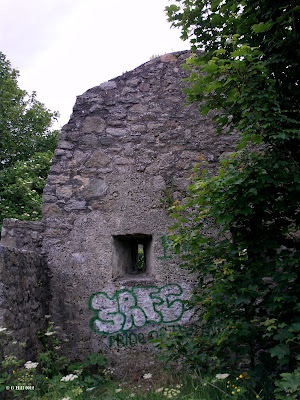 Above Image; Some of the needless daubing 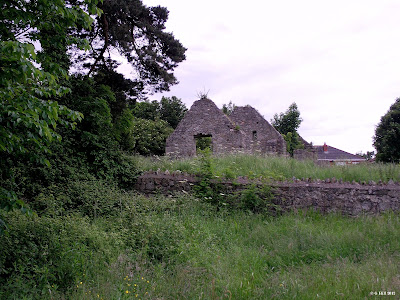 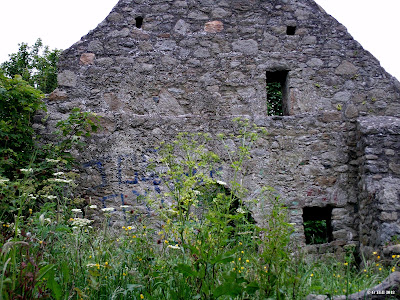 The ruins of the old Whitechurch Parish Church stand on slightly elevated ground overlooking the Whitechurch stream and must have been very picturesque in it's time. They are now unfortunately three quarters surrounded by a modern housing estate. The parish dates back to the 12th century when it was under the auspices of St Mary's Abbey. There is not much information regarding it's history thereafter other than it was a functioning Parish Church and was out of use by the time that the new Church was built nearby in 1827. The graveyard surrounding the ruins is believed to be circa 1720AD.
The Church consists of two chambers although it may have originally been only one as was the norm for these type of  structures with the additional chamber added later. The three main gables still stand and form a dramatic looking ruin, but most of the side walls have crumbled away over time. There is a granite entrance arch and a rectangular opening in the East gable. The central gable has a small connecting archway.
Access to the ruins is by way of an arched gate on it's South East side which is approachable on foot from Whitechurch Road  up a narrow lane way.  Unfortunately the gate remains padlocked, no doubt by the local council to deter any antisocial behaviour within the grounds. Indeed parts of the ruins have already been carelessly daubed with graffiti. Looking through the gate you have a view of a large monumental cross and the Eastern facing end of the Church. There are steps that lead up the incline to the ruins that are now overgrown, the grass standing almost hip high in the graveyard enclosure.
Not to be deterred from getting a closer view, we drove around into Grangebrook estate where a cul-de-sac circle provided a parking space for our car. There is an area of grass here sloping down to the stream and a trail can be made through the grass. While walking through this grass on the evening that we visited, a fox darted out past us and ran into an adjacent clump!.
The wall of the graveyard is high enough but we quickly managed to find a spot where it was just about possible to clamber up and over and finally gain access!
Within the ruins are what appear to be two early Christian burial stones affixed to the East gable. There is some interesting stonework and the West Gable sports two splayed windows. The Church seems somewhat neglected being quite overgrown in places and it appears that the long grass is doing it's job in deterring any further vandalism as it's not a place you could comfortably sit down in. It is a pity though that a few careless individuals can cause this interesting ruin from being restored to a more picturesque state.
To find the Church ruins, take the R115  south from Rathfarnham (Willbrook Road) When you reach the fork in the road at the old Tuning Fork Pub, take the left hand route. Continue on straight through the crossroads with Taylor's Lane and at the following roundabout turn left. Take the first turn right into Grangebrook estate and then almost immediately the first left. You can park at the end of this road for a short time without blocking any entrance ways and you will see the ruins on your right.
Posted by Castlehunter at 12:55