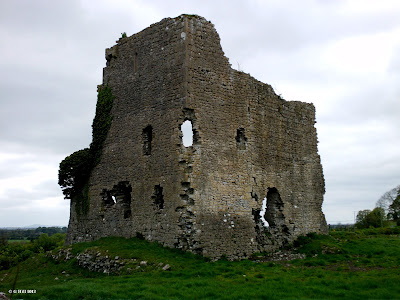 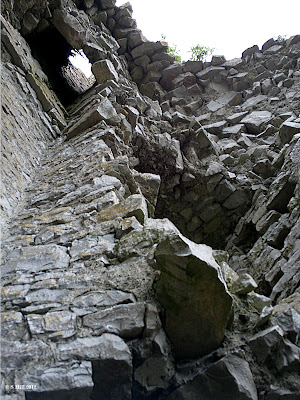 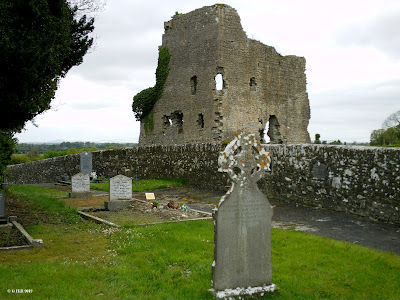 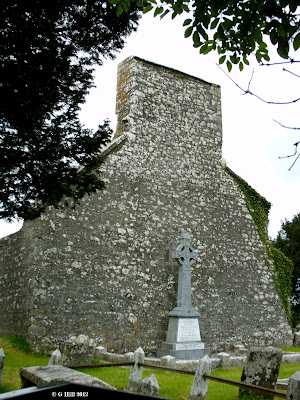 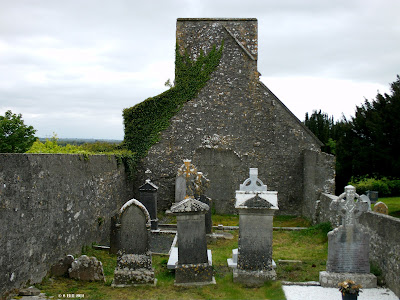 Above 2 Images: The ruins of Carrick Church 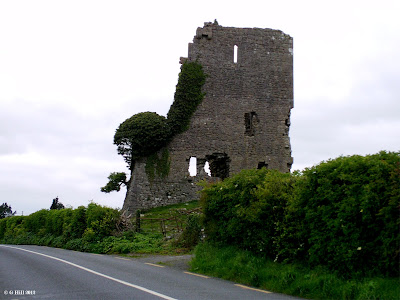 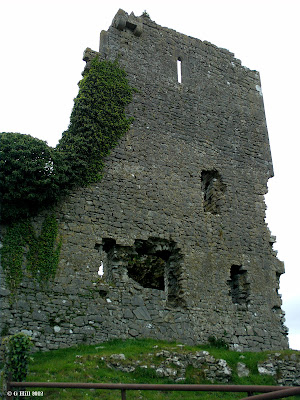 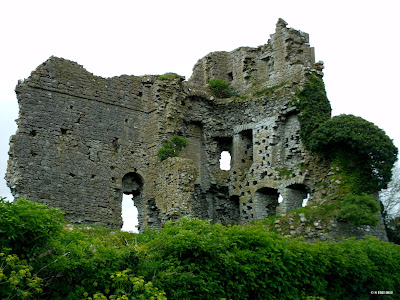 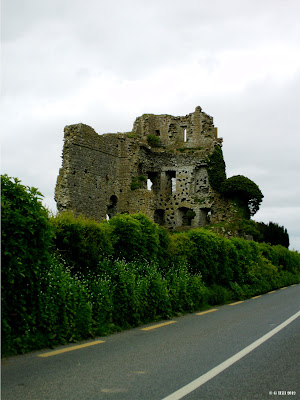 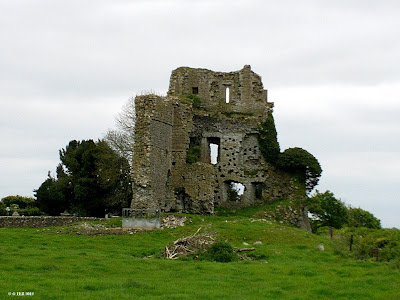 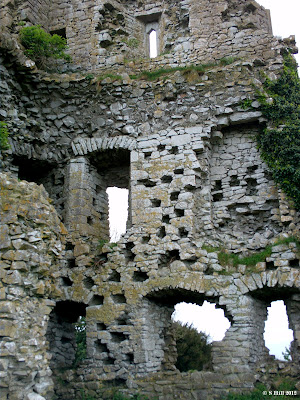 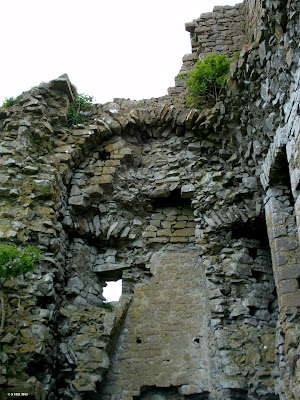 Carrick (or Carrick-Oris) Castle stands on elevated ground about 3 miles out of Edenderry on the road toward Kinnegad. There is speculation that the present ruin dates from the 15th or 16th century as it's architecture does not quite seem to fit that of the type constructed by Piers De Bermingham in the 13th century, but it is possible that the original building was added to later. De Bermingham himself was involved in the massacre here of 32 of the O'Connor clan in 1305 following a banquet held by him to make peace following a previous incident at a party sponsored for a 12 year old O'Connor boy on his confirmation at which the boy was thrown from the Tower.
The present ruins, originally  a square or possibly an L-shaped Tower house are slowly crumbling away. There are two external walls still standing and some parts of the interior remain. There is also evidence of fireplaces and such. The immediate ground is strewn with rocks as they fall away over time from the walls.
Locally the Hill of Carrick contains a large limestone outcrop called The Witch's Stone. Looking at it , it would have appear to have been an ideal location to build a Castle but the rock has a legend attached to it regarding a Witch who's spell cast this rock at some saintly men and this is the location at which it landed. Superstition at the time being what it was, it probably detracted building there.
Carrick Castle sets a striking pose as you approach it by road. Adjacent to the Castle are the ruins of a 13th century De Bermingham Church of which a reasonable amount remain. It is not a particularly remarkable Church being very basic in design but it affords a good view of the Castle from it's grounds. It is accessible by a stile in the roadside wall.
The Castle itself seemed accessible as there were some metal gates at the roadside, but on closer inspection we discovered that they had barbed wire fencing behind them. The owners it would seem might have insurance concerns. Oddly enough there were no signs indicating "No Trespassing" so we walked up the road  a bit and found another gate leading to the field. It was overlooked by a nearby house but nobody seemed to be around so we hopped over the gate and walked up to the ruins.
It is possible to climb up a way on the interior as far as one of the windows but there is no evidence of a stairwell. It may have been located on one of the missing walls.
The Castle is really just a shell now and has a lot of rubble lying around it. It's hard to imagine that this was once a fine stronghold. There are numerous De Bermingham Castles within reach of Carrick such as Grange and Kinnefad so it worthwhile visiting them all.
To find Carrick, take the R401 road out of Edenderry heading toward kinnegad. About 3 miles later you will see a right hand turn signposted for Carbury (Site of another Castle posted earlier here) Continue on past this turn and the road swerves to the left and you will easily spot the Castle ruins ahead of you on the right hand side. Parking is possible in a small lay-By opposite.
Posted by Castlehunter at 13:12