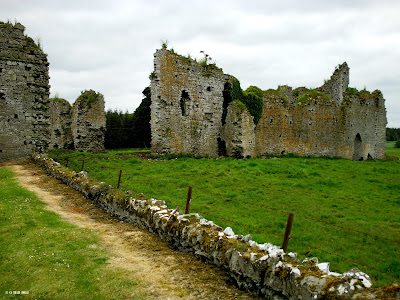 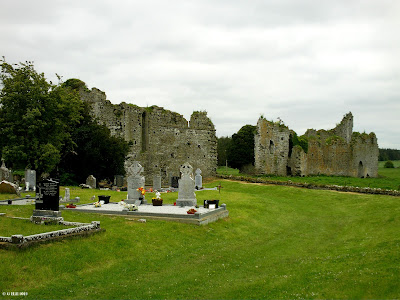 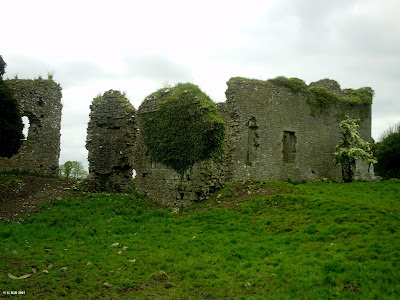 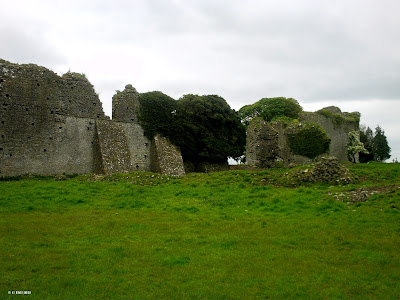 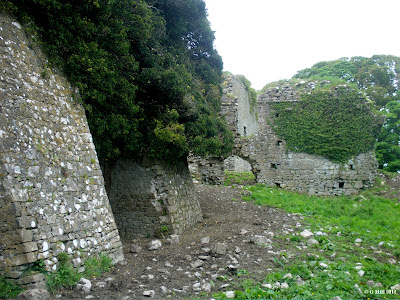 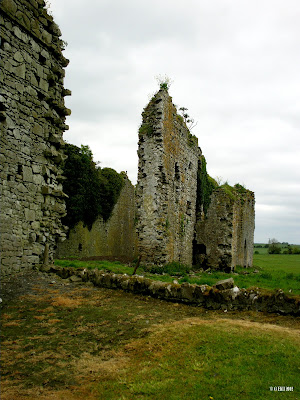 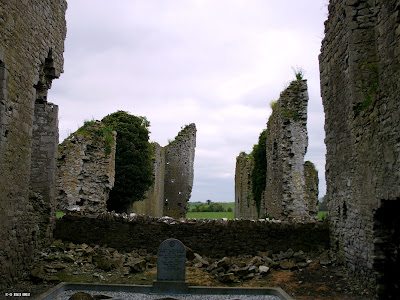 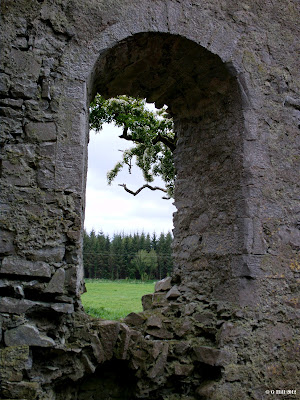 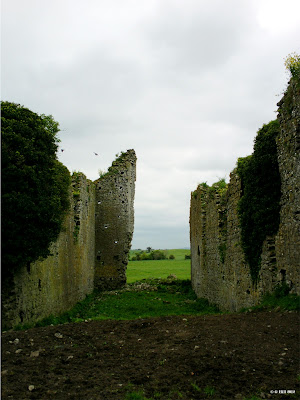 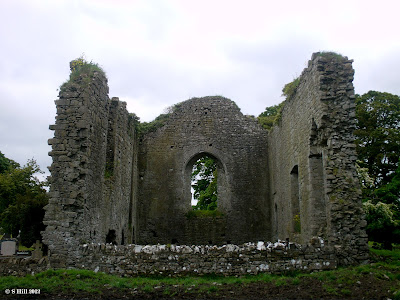 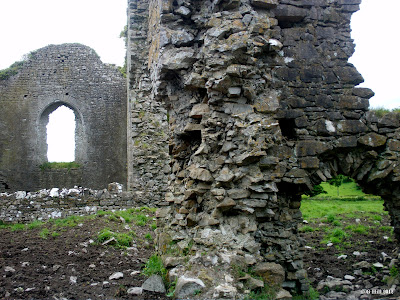 Located about 400 feet from the roadside, in a field behind a wall enclosed graveyard, lie the angular ruins of the Abbey of De Laude Dei at Ballyboggan. This building is one of the least known of the Augustinian Abbeys in Ireland and was first constructed in the 12th century. It was in it's time a popular place of pilgrimage but unfortunately was gutted by fire in 1146 and had to be rebuilt. It suffered again under Henry VIII's suppression of Abbeys and was dissolved in 1538, the lands then given over to the De Berminghams.
The abbey would seem to be constructed in two parts. The eastern facing section has a large arched window in it's gable end while the Western section is now but two long walls. There does appear in this section to be some evidence of a now disappeared large window. The sections are divided by a medium height boundary wall which although has wire fencing running along the top can be traversed at a couple of points.
There are a lot of historical sites in and around Edenderry and we found this Abbey while looking at some De Bermingham Castles nearby. A roadside gate leads up a long lane way adjacent to a graveyard. This brings you directly to the site. The ruins are extensive enough and look quite striking on first view. The eastern section has an entry door and this part is the more complete.Within there is some interesting stonework to be viewed. The other section seems quite divorced as the walls between may have been removed or indeed collapsed over time. The whole layout left today appears quite strange. What does remain are parts of the Nave, the Chancel and the South Transept. The field in which the ruins sit appear to be grazing land (as Cows are present) but there are no prohibitive signs so you can visit both sections easily. One thing though, you will have to hop over  the boundary wall and the ground on that side of the approach to the Western section can be quite spongy and at times muddy so be prepared. Best advice is not to visit on a day when rain is present or just recently fallen.
To find Ballyboggan, take the R401 road from Edenderry toward Kinnegad and drive for about 2 miles.You will pass Carrick Castle (see earlier post here) on your right and about another 2 miles on you will spot the ruins of the Abbey in a meadow on your left hand side. Look for the graveyard entrance gate. There is just about enough room to park at the gate  but it is on a sharp bend and cars tend to come around this bend at speed, so it is advisable to park a little way up the road on the straight.