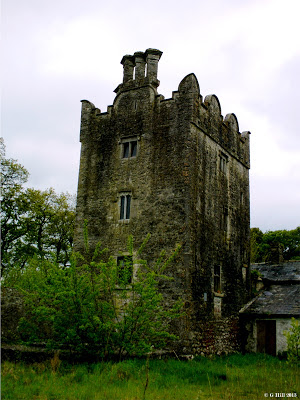 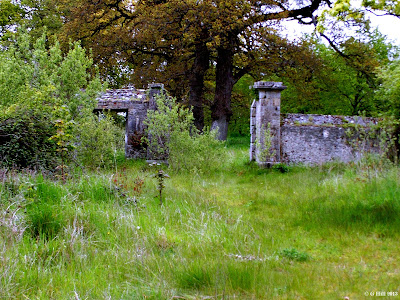 Above Image: A boundary wall entrance from the estate. 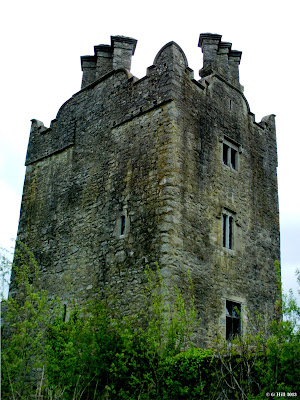 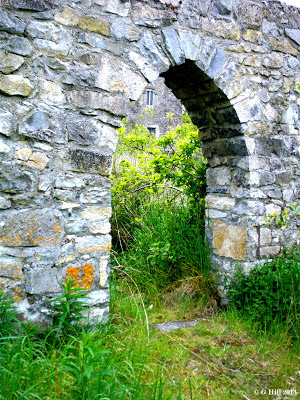 Above Image: A walled garden entrance 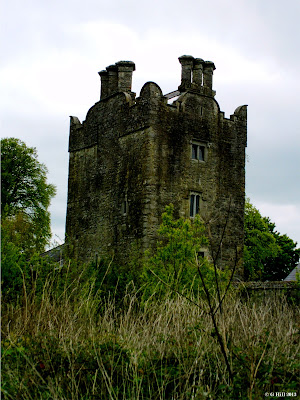 Above Image: A view from the overgrown garden 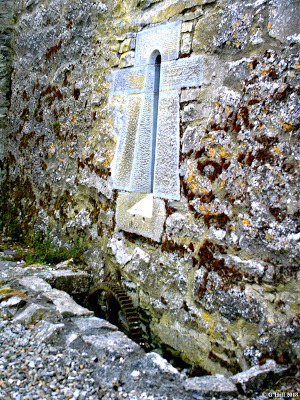 Above Image: What appears to be part of a mill wheel 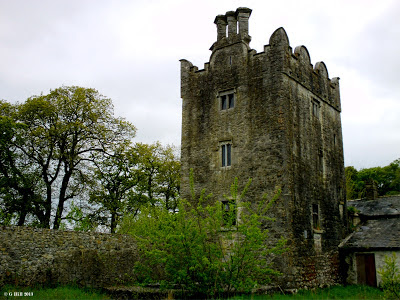 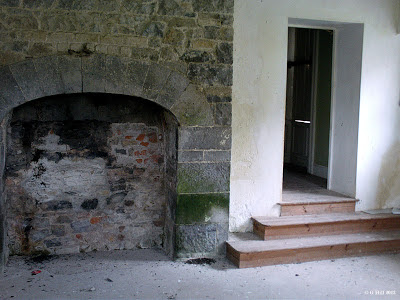 Above Image: Part of the abandoned visitor centre 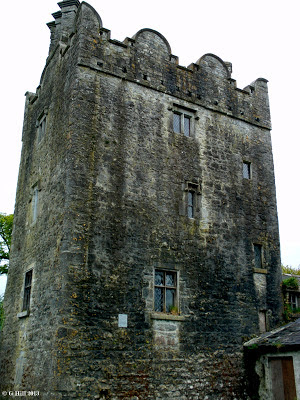 We have spent quite a bit of time in the Kildare/Offaly border area visiting among others Carrick Castle and Blundell Castle (See earlier posts here  & here) and we were informed of on one trip of another De Bermingham Castle called Grange. This Castle lay fairly close to Carrick so we diverted to take a look.
Grange Castle is a tower house constructed in 1460 by the aforementioned De Berminghams and is admired for its ornate battlements and chimneys which were added to the original structure in the 1600's. The Castle remained in De Bermingham hands until 1735 when it was sold to the Tyrell family who held ownership until 1988. It was then passed to the OPW by Robert Tyrell. The lands are held by the Tyrell trust who received grants to help restore the Castle to its former glory. Unfortunately any further plans were abandoned in 2003 even though a lot of restorative work had been carried out including restoration of the great hall inside and the addition of a visitor tearoom and an office. The trust had tourism in mind but alas it now lies abandoned and is unfortunately looking as if it might return to its semi ruinous state.
We found entry by a field gate on the western perimeter of the estate and this seemed the best way to approach as the gate on the northern end was further away from the Castle. There was no distinct pathway so we just followed the direction of the Tower until we came across and entrance way to it. It is partly surrounded by more modern buildings one being a 19th century house. I was surprised to see glass in some of the windows as I was expecting more of a ruin. At this point, although there were no prohibitive signs, we began to wonder if anybody was occupying any of the adjacent buildings, security guards or such, as we were unaware initially on our visit that it had undergone some restoration. It didn't take long to realise that it was in fact abandoned and had been for some time.
We peered through the window of one of the ancillary buildings to see if there was any access but there was just debris strewn around. Many of the windows have been broken and interiors tampered with, signs of the mindless vandalism that abandoned buildings tend to attract. We walked around the area and found further outbuildings one containing some bags of plaster left over presumably from the restoration work. The gardens which look as if some landscaping had taken place are now overgrown including a very wild walled garden with an arched entrance. I've often seen a great castle and it's land in latter ruination but it was interesting to witness what it looks like in its onset.
The Tower itself is to my eyes magnificent and still holds a lot of its charm. It is very slightly marred by the derelict buildings adjacent but its architecture is so unusual to the general tower house types that it is definitely worth the time to seek it out. It would be nice to get a chance to see inside but with its large padlocked gate it doesn't look like this will be anytime soon.
To find Grange Castle take the R401 out of Edenderry and about 4KM along the road you will spot the ruins of Carrick Castle on your right. About 250m past the ruins there is a left hand turn  It has Grange Castle signposted. Follow this narrow road until you reach a T-Junction. Turn left and about 100m down the road you will find a field gate angled away from the road. It is possible to park on the grass margin in front of the gate. Once over the gate use the Tower as a guide to head in the right direction
Posted by Castlehunter at 20:25