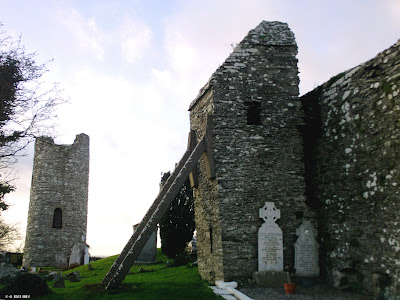 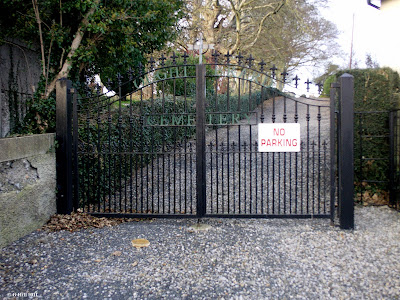 Above Image: The entrance gate from the road. 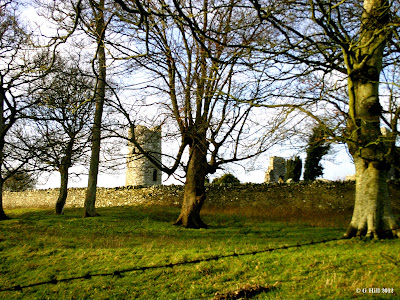 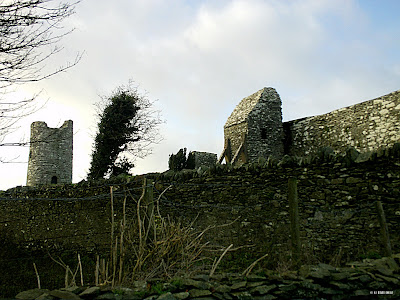 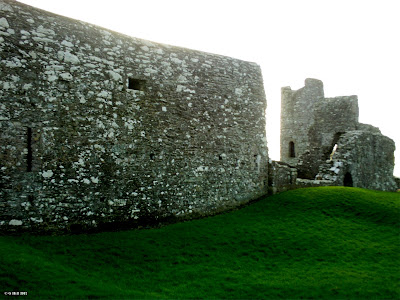 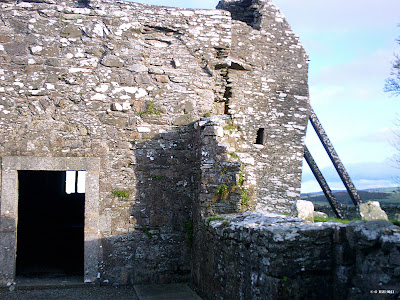 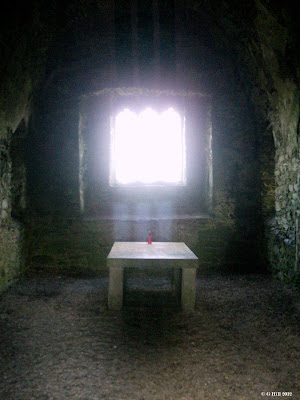 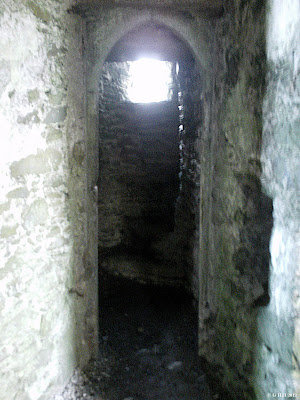 Above Image: Entrance to the spiral staircase 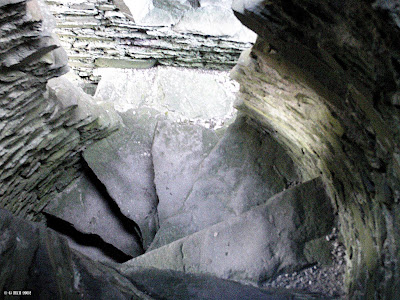 Above Image: The spiral stairway 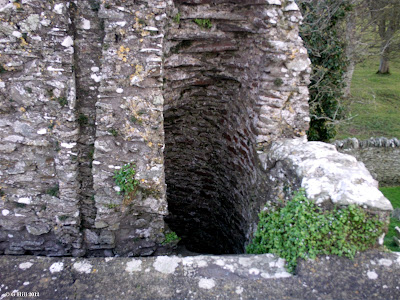 Above Image: The exit onto the roof 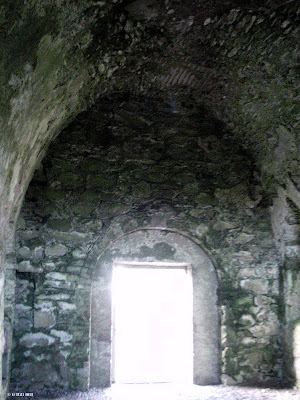 Above Image:  The vaulted roof views from within. 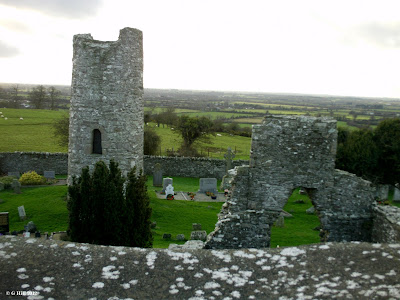 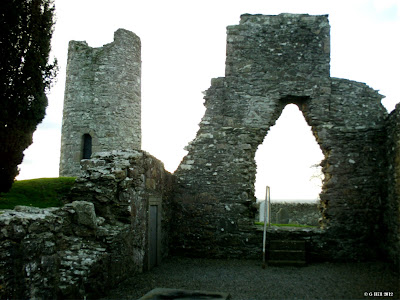 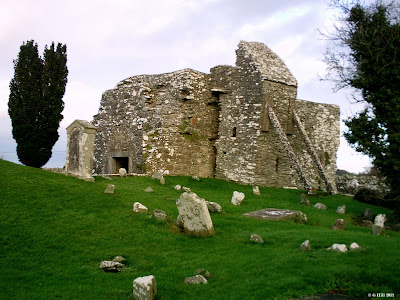 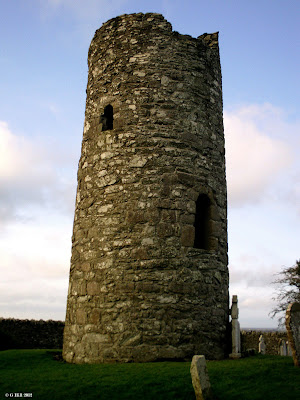 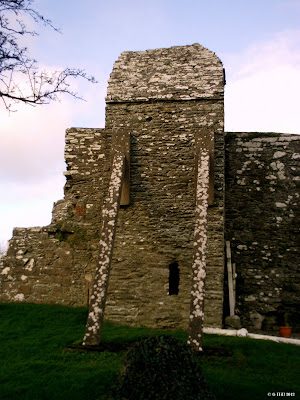 Above Image: The Concrete Supports. 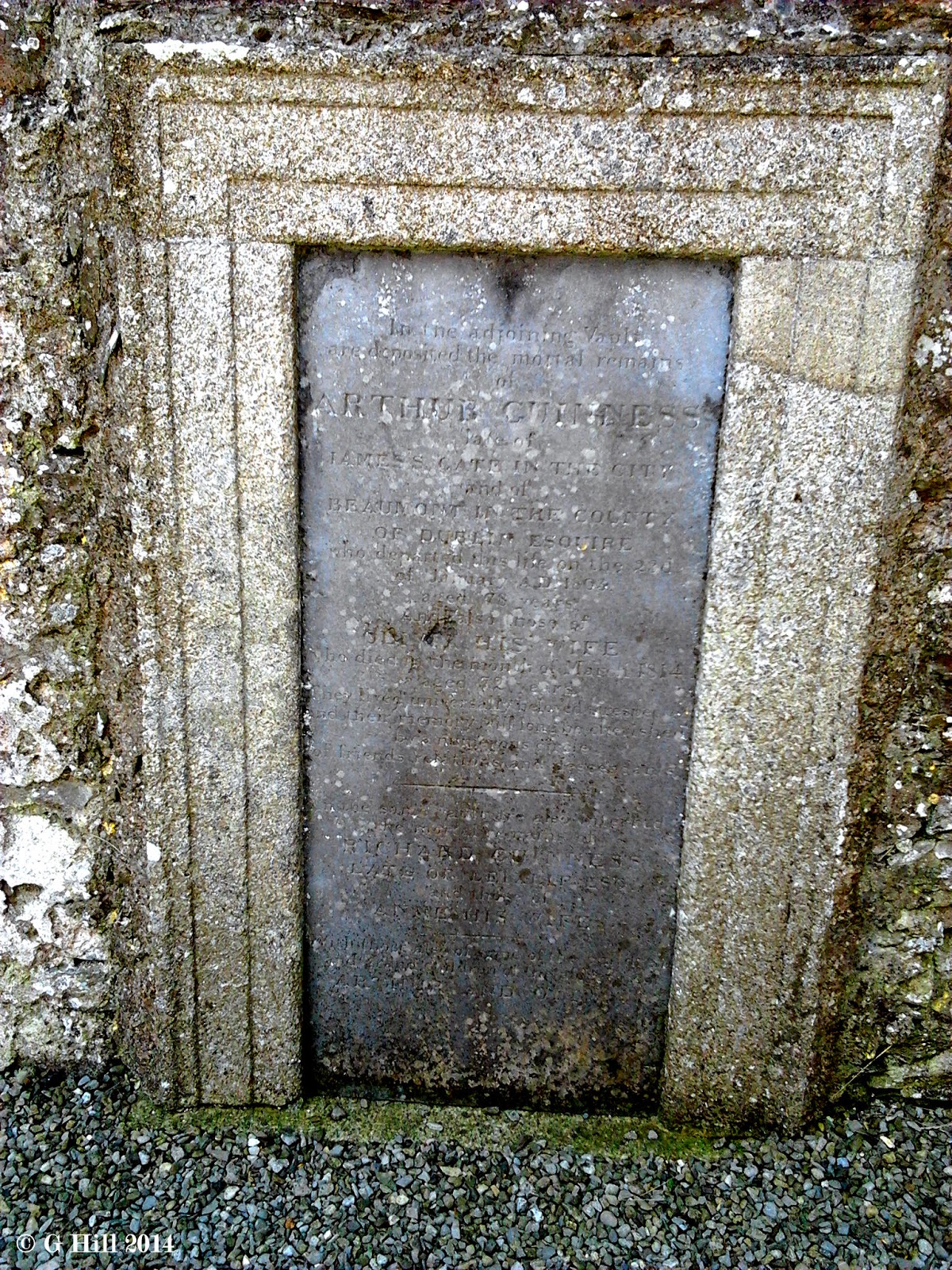 Above Image: Memorial to arthur Guinness within the Church 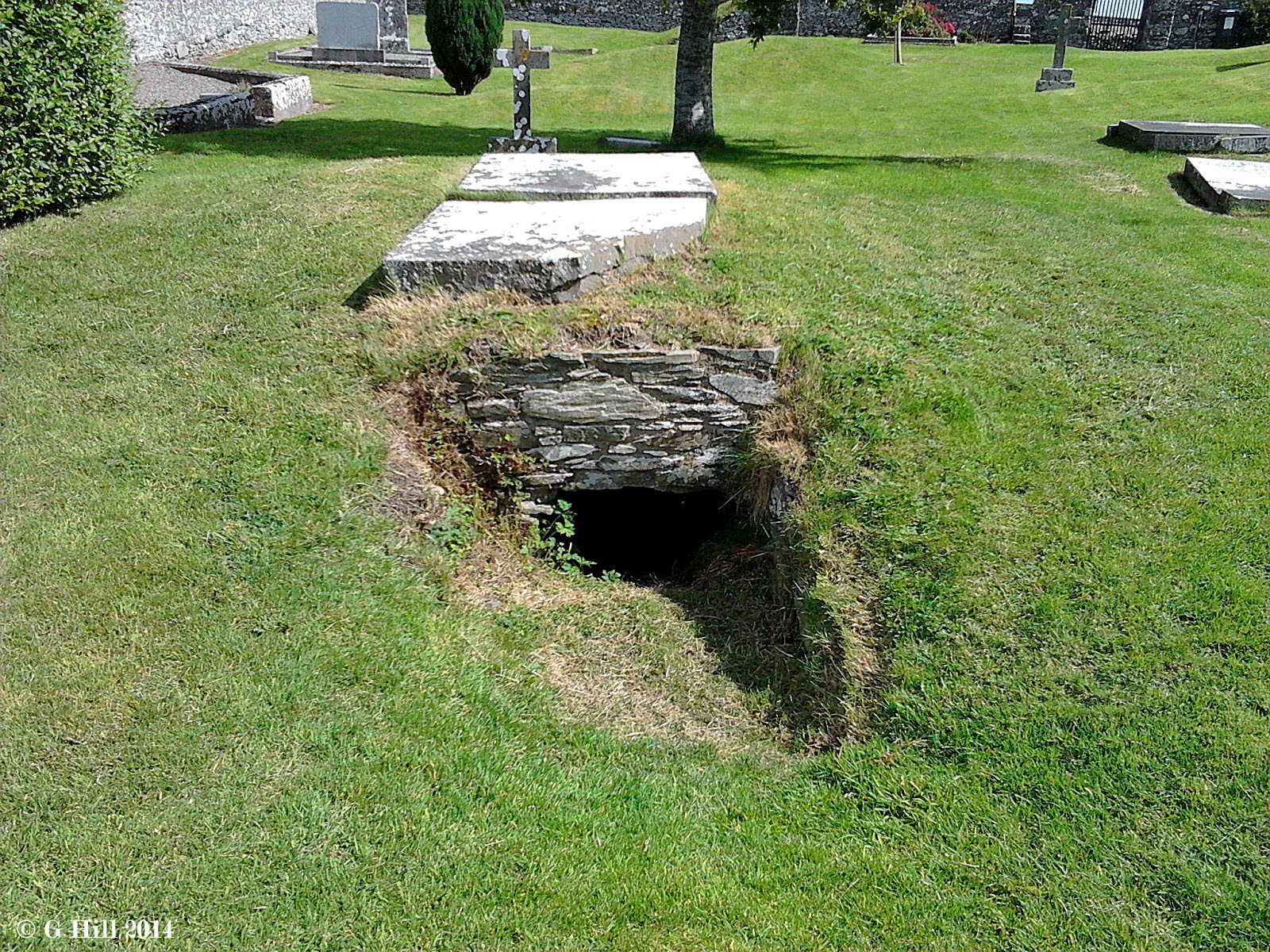 Above Image: An open tomb. 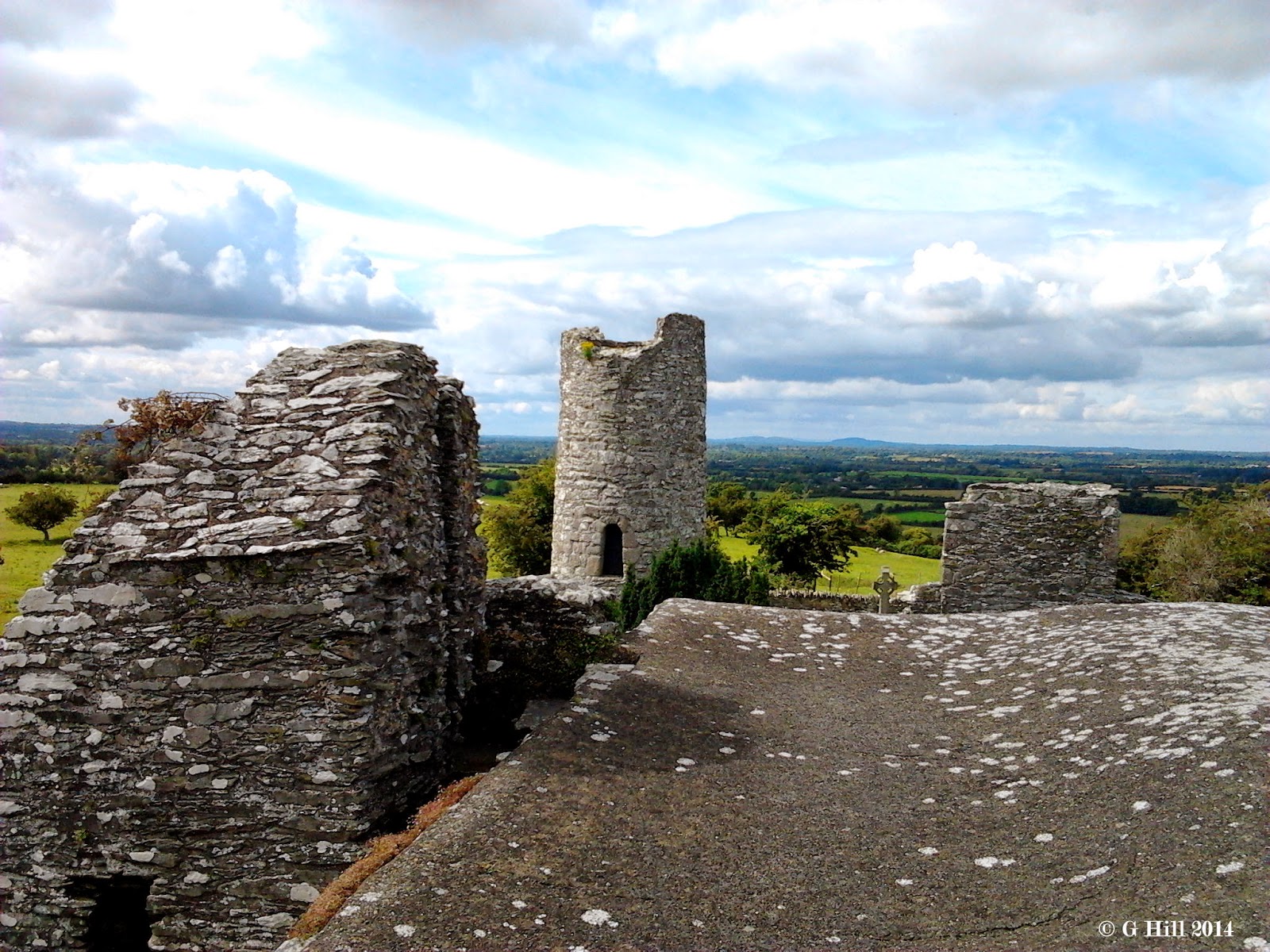 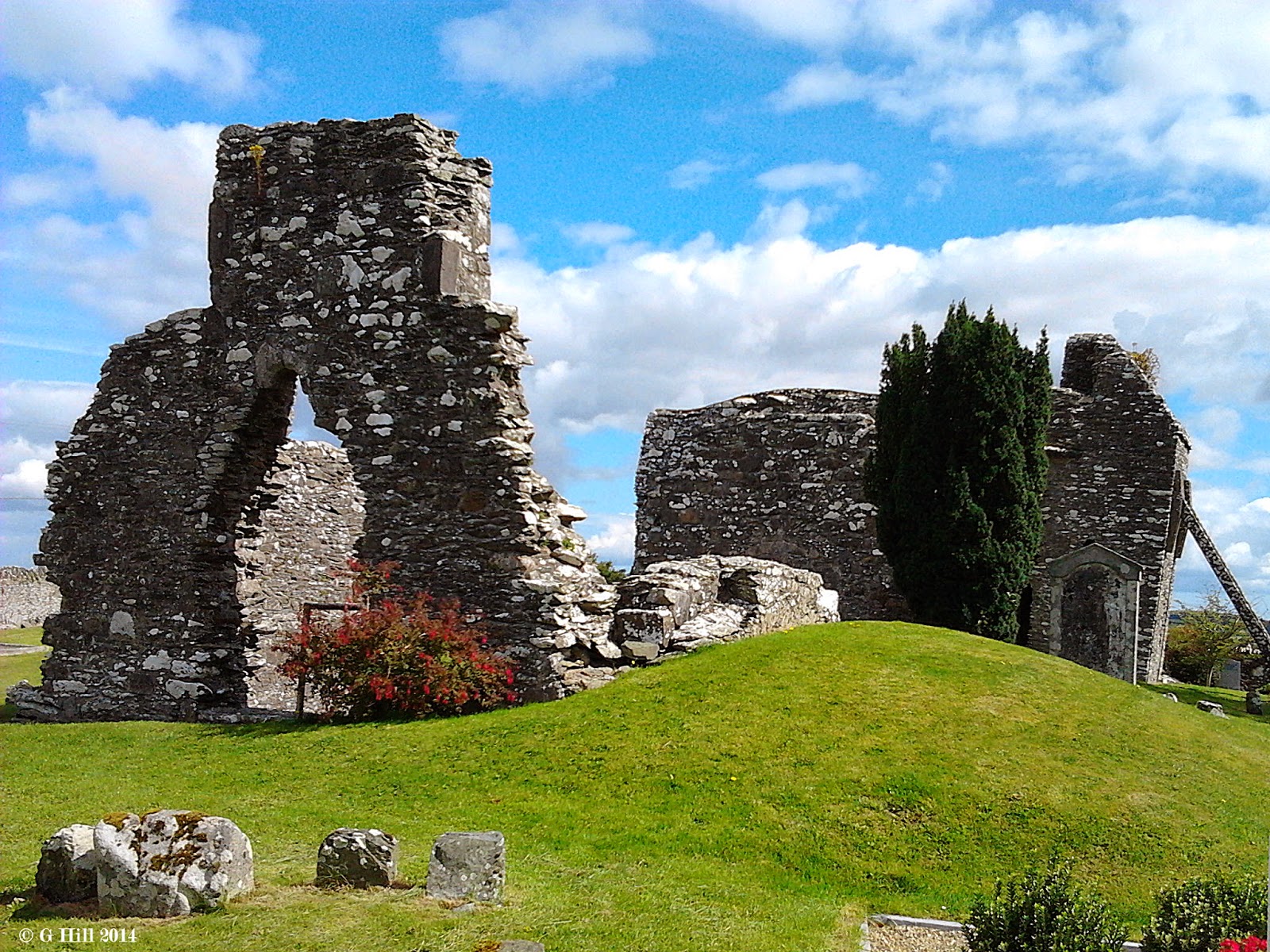 There appears to be a very vague history to the ruins at Oughterard. The site was initially a monastic one and said to be founded by the 6th century St Briga. The monastery was destroyed by fire by Vikings in the late 10th century. The round tower is thought to be the only remnant of the early monastic site and by the 1700's it was already in ruins. It stands partially today at a height of approx. 9.5 metres. The ruined Church is dated anywhere between 1189 and 1350 although the later date is more likely and sports a fine vaulted roof . By 1620 the Church itself was in ruins having long been in disuse following the dissolution of the monasteries.
It's not difficult to find Oughterard but you could drive by it quite easily. The entrance gate lies between two residences and could easily be mistaken for a private entrance.Although it seems possible to drive up the small hill to the ruins, the main gate at the road appears to be padlocked. There is however a turnstile at the right hand side for pedestrian access. Once up the hill you will find the site surrounded by a high wall. Access looks to be by steps up to an equally high stile, but we found on the day we visited that the main gate was unlocked.
The area is extremely well kept and the undulating land within would suggest some evidence of Barrows or vaulted graves. Indeed The late great Arthur Guinness is interred within this very cemetery.
The Round Tower, now decimated to to less than half it's original size, is inaccessible, but the Church ruins are freely open. Within the barrel vaulted roof the interior is dark and sombre. The eastern facing window is still intact but does not shed much light within. Just inside the entrance to the right is a stone staircase, narrow and worn, which leads the more intrepid visitor up onto the roof where fine views of the surrounds can be seen. It was quite breezy when we climbed up and a few rogue gusts made things a little precarious. This Tower has partially subsided away from the main building and has been buttressed by two concrete supports to avoid further movement. It is surprising that you are still allowed access to the stairs, but hey, who's complaining? From the roof  vantage point you can also see not too distant the ruin of a Castle Tower. It is located in an adjacent field on private land and although thought to be associated with this site is not easily accessible. The field is barb fenced and there is a very aggressive looking Black Bull in residence.
To find the Tower & Church ruin at Oughterard, take the N7 from Dublin. When you have passed the Blackchurch Inn on you left you will see the next exit is for Castlewarden. Take this exit and at the top turn left and cross the motorway bridge. Follow the sign left for Castlewarden and then right. About 2 miles up this long country road you will come to a crossroads. Take the right hand turn for Ardclough. About 1000 metres up this road it takes a sharp right bend. You will find the entrance gate between two houses just after the bend. Roadside parking is available.
Posted by Castlehunter at 17:20