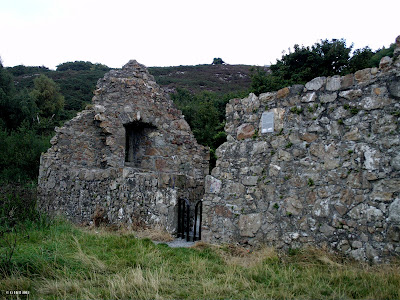 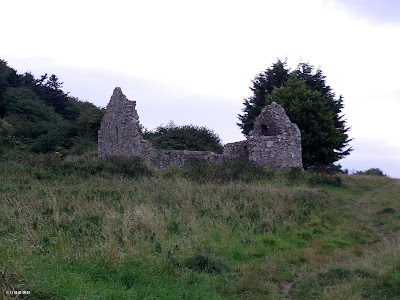 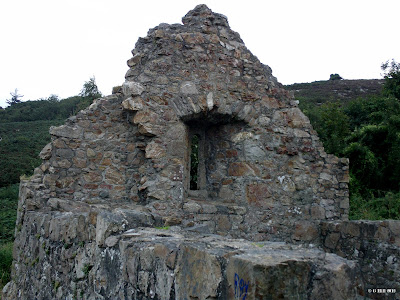 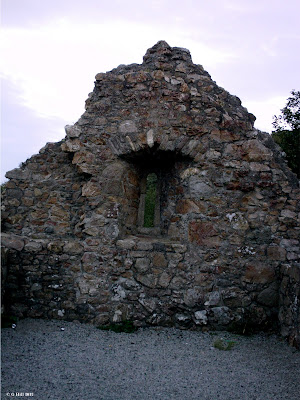 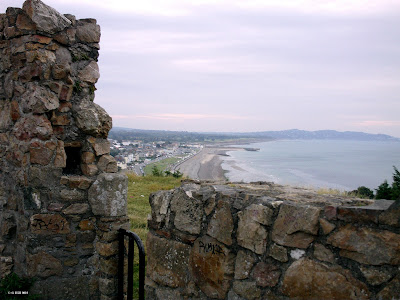 Above Image: A view of the coast from the ruin 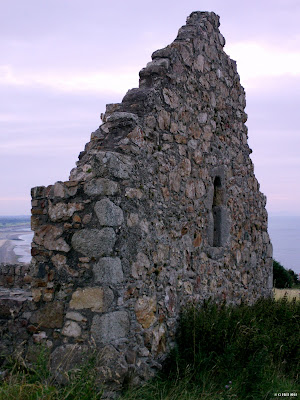 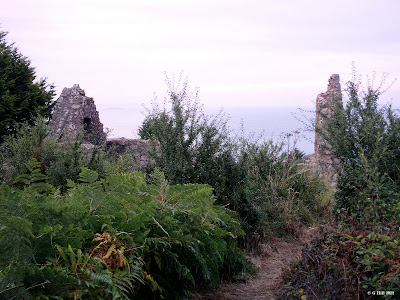 Above Image: The hill track that leads up into the woods 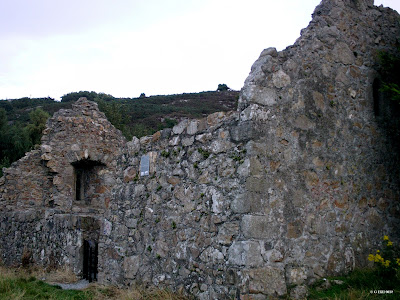 Here's an interesting little one. There is a hill walk between Bray and Greystones over Bray Head in Co Wicklow that is quite well travelled. On the lower Northern slope of Bray Head and just before you enter some woodland, there are the ruins of a small Church named Raheen-a-Cluig. This Church has a commanding view over the coastline and it is believed to have been built in the latter part of the 13th Century. The name translates to "Church of the little bell" and was given to the Augustinian order by the then prominent Archbold family. Apart from some small restoration in the 1700's it has lay in ruin  for several hundred years.
The ruins are easily accessed by way of a car park at the top of Raheen Rd, Bray.
We parked and took a short 5 minute stroll up the easy incline and along this pathway we found the Church.
We visited in the evening time about an hour before dusk so there were only a few people out and about, mostly walking Dogs. Other than that we met no one.
The Church is typical of the type built around that time, but wear and tear has left it looking somewhat like a bedstead! There are remnants of a doorway which probably held a heavy timber door and there are a couple of examples of round arched windows. sadly, although cleared of vegetation and under state care, there has been some recent vandalism in the form of graffiti.
The most interesting aspect of the ruins has to be the stories surrounding it, It is known to have been used in it's time as a storage point for smugglers coming up from the nearby cove with their contraband. They themselves probably concocted tales of Ghosts and such to keep away prying locals and especially the local constabulary. Nonetheless the ruins are located in a very odd spot, nestled on an open slope with thick vegetation and woodland in the background. This factor would also make it conducive to these stories.One visitor in recent years claimed to have been menaced by a cowled figure when taking shelter in the ruins one night. An Augustinian Spectre? For minds which run this way and with little information available about the ruins, maybe there has been some turbulence in it's ecclesiastical history  resulting in these apparitions. After all, many religious orders lost a lot of their fold in violent circumstances over several hundred years. We kept an eye out for any spectral figures, even holding out until after dusk, but nothing supernatural presented itself. That said it can be quite a creepy place once the sun has gone down.
To find Raheen-A-Cluig take the M11 Dublin to Wexford Rd and exit at junction 5 for Bray. Follow the signs for the town. Once in Bray go straight through main street and take the left hand fork onto the R767 (Vevay Rd). continue on for about a mile until you see a left hand turn for Newcourt Rd. Turn left and then take the 2nd turn right onto Raheen Rd. At the top of this road is a free public car park. The track up to the ruins is on the right hand side of the car park as you enter.
Posted by Castlehunter at 12:25