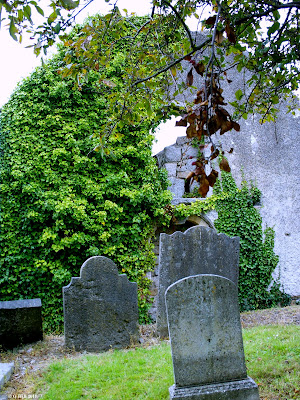 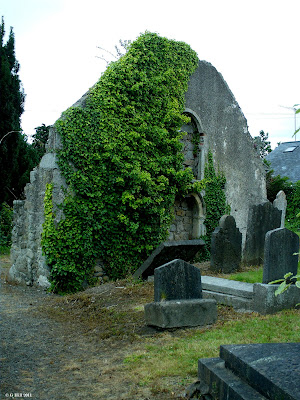 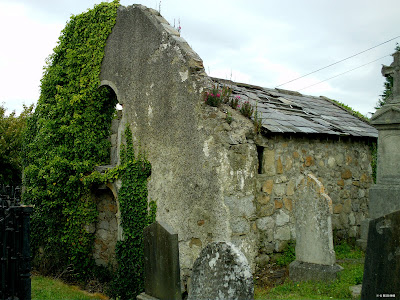 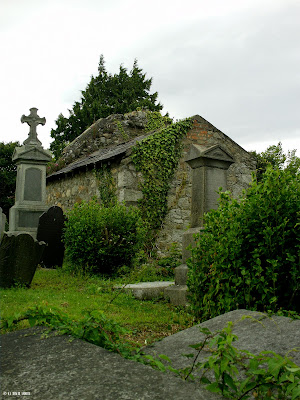 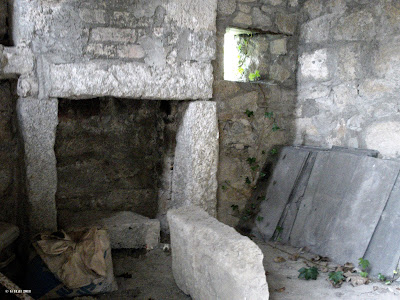 Above Image: A view inside the Watchman's house 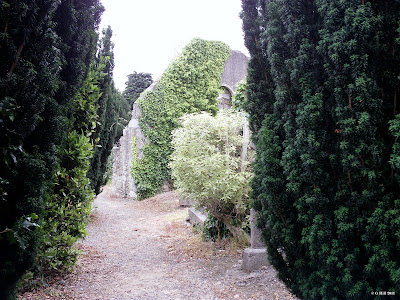 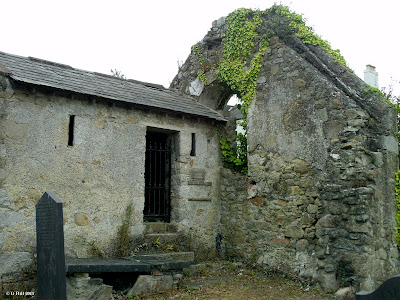 Above Image: The Old Church gable and Watchman's House.

The scant ruins of Old Carrickbrennan Church lie in a graveyard not far from the ruins of Monkstown Castle. The old Church is on the grounds of a medieval Cistercian Monastery which was dedicated to St. Mochanna. This building fell into ruin and in 1668 the present Church was constructed on the site. By 1777 it was deemed too small for use and was already in a ruinous condition.The graveyard was closed in 1874 due to fears of a Cholera outbreak, but was subsequently still in use for burials well into the 20th century.
Finding Carrickbrennan Church is quite easy. There is a gate in the surrounding wall on Carrickbrennan road. Access is not so easy as the site is in the care of Dun Laoghaire-Rathdown County Council. The gate generally remains locked and permission to enter has to be sought. Surprised we were then when we reached the gate to find it unlocked! We spent about a half hour having a look around. The site is surrounded by modern houses and I swore I heard someone shout "Get out of there!" at us at one point. Maybe someone thought we were trespassing and up to no good.
The old Church remains are scant. The gable still stands proudly but the rest of the Church has fallen to the test of time. The curious stone house attached to the rear of the gable is in fact a Watchman's house, built in the 19th century after the Church had ceased to be, but necessary to protect the graveyard from the scourge of body snatchers who were active at the time. The graveyard itself is said to be haunted by the spectre of the Widow Gambol who was hanged for the betrayal of Priests for monetary reward. We didn't meet the Widow thankfully. The graveyard is also notable as a burial ground for those who perished at sea in maritime accidents.
As mentioned, the site is in the care of the County Council and just as we were leaving a Council worker arrived on a bicycle and asked if we were finished. We said yes and he looked confused by our accents. Apparently an Australian visitor had requested the gate to be unlocked that day so he could search for ancestry, but he had long gone from the site. Lucky for us we were leaving when we did or we'd have been locked in for the night with the widow!
To find Old Carrickbrennan Church Take the N11 from Dublin to Wexford. Take a left hand turn onto the N31 Mount Merrion Rd. At the bottom of this Road at the T-Junction , turn right and continue on the N31 until you reach Temple Hill and the left hand turn onto the R119 Monkstown Rd. When you reach the Huge Monkstown Church the road forks left and right. Take the left and fork and then turn left again onto Carrickbrennan rd. The gate to the Site is on your left just before the roundabout where the ruins of Monkstown Castle stand (see post here) Seek permission first and don't stay too late as the gate will be locked!