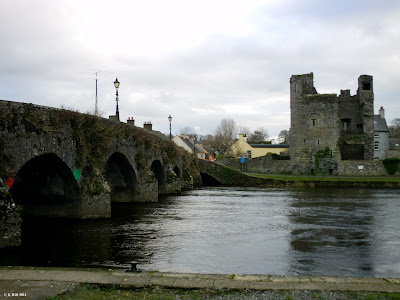 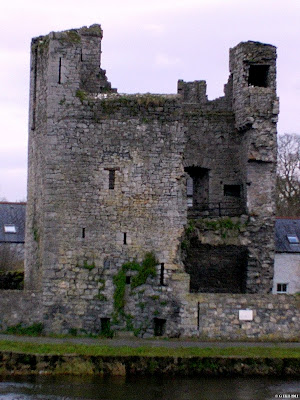 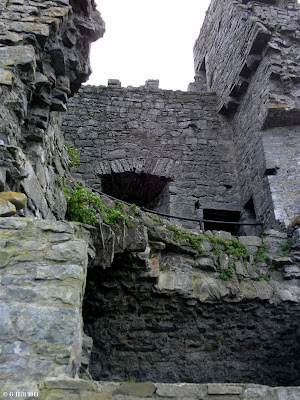 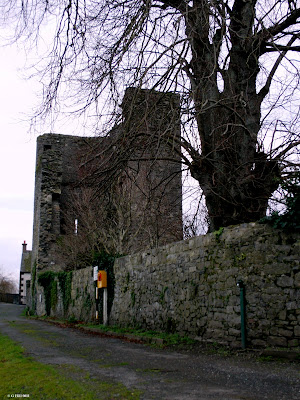 Above Image: The Castle with the Towpath in front. 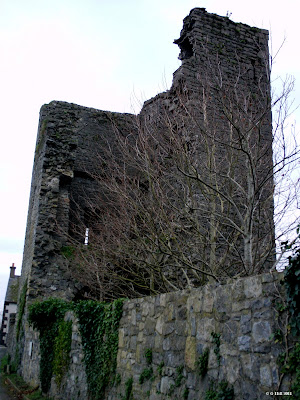 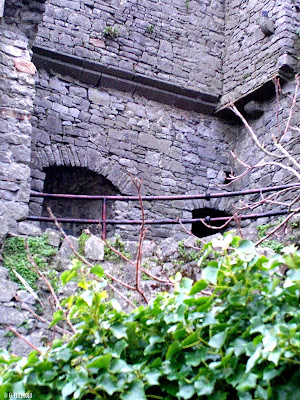 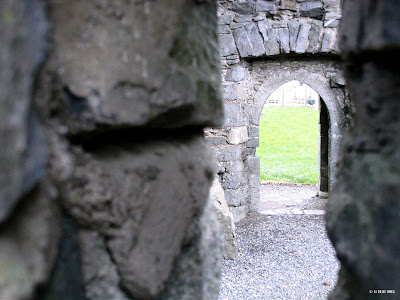 Above Image: A view into the interior through an arrow slit

The Black castle stands alongside the River barrow in the small Carlow Village of Leighlinbridge. This 50 feet high Tower and partial Bawn are all that remain of the structure that was first constructed in 1320 on the site of an earlier Castle dating back to Norman times. Indeed most of what remain today are additional reinforcements from the 16th century. The Tower was strategically placed adjacent to the fine Valerian stone Bridge built in 1320 by a Canon of Kildare Cathedral, Maurice Jakis. This Bridge is thought to be one of the oldest surviving European bridges still in use. The objective of the Tower was to defend the River crossing and the nearby Priory. The castle was seized by the Kavanagh's in the 14th century who set about charging an early type of Bridge Toll.
In 1547 the Castle fell into the hands of Henry VIII's forces and the Lord deputy Edward Bellingham reinforced the Tower and Bawn and gave it the name "The Black Castle". The Castle was attacked and mostly destroyed by Rory Og O'More, a local Chieftain, in 1577 and although partially rebuilt, it was again ransacked by Cromwellian forces in 1650. The South Western portion of the Tower collapsed in 1888 leaving it in much the same state as it is today.
The Castle is easily accessible to view as it stands beside a towpath on the River Barrow and you can walk alongside it. There is also a fine view of it from directly across the river. While the collapsed portion reveals much of the interior there does not appear to be any public entry to the ruin as it seems to be on private grounds behind the Bawn. there is a Small wooden gate which clearly warns "Beware of the Dog" and although there was neither hide nor hair of this hound to be seen, I think that the message of privacy was well conveyed by it's owners. A bit of a shame really as there appears to be a safety rail of some type on the upper level possibly accessed by a stairwell. The Village is generally quiet but the Bridge can be busy having a footpath only on one side, so keep an eye out as drivers seem apt to hurry across.
To find the Castle, take the M9 Dublin to Waterford road and at junction 6 take the exit and follow the signs for leighlinbridge. You will eventually have to take a left turn onto the R705 for the Village. Street parking is easy enough and a short walk to the bridge is all that is required.
Posted by Castlehunter at 18:30