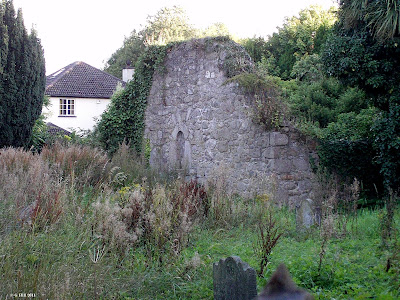 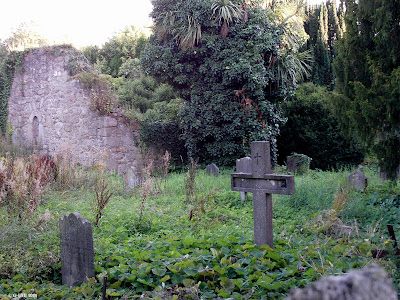 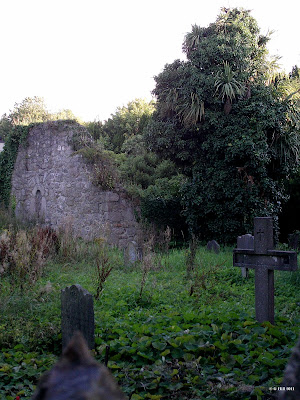 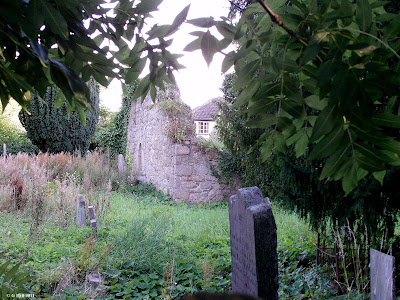 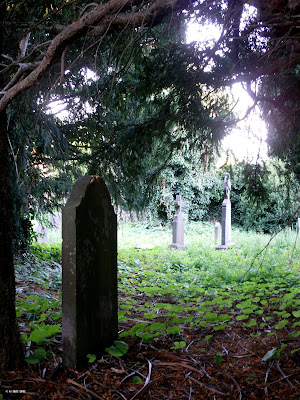 Old Connaught Church has a very vague early history. It was built as an oratory and although it looks similar to other middle age Churches, it's date of construction is not presently known. it is mentioned in records as having been attached to the parish of Bray in the early 1600's but is believed to have fallen into a ruinous state in the 1630's. It stands near the Village of Old Connaught, adjacent to the old lands of Ballyman which lead to Enniskerry.
The ruins can be found on Old Connaught Avenue near the Junction of Thornhill Road. The iron gate facing the avenue remains locked by Dun Laoghaire/Rathdown County Council , but I'm sure access could be gained by applying to the Council for permission.
Within, the Church is now covered quite a bit with ivy and what remains seems roughly built with quite a few rounded stones that probably littered the area at the time. There are some very old gravestones around the ruin and although the graveyard is surrounded on three sides by modern housing and a busy road, there remains a very quiet and sombre air to the place.
To find Old Connaught Church, take the M11 from Dublin to Wexford and exit at junction 5. Turn right at the next roundabout onto the R761 and then take the first right hand turn onto Old Connaught Avenue. follow the Avenue to it's junction with Thornhill Rd and you will see the iron gateway in a wall on your left. Alternatively you can approach from Enniskerry by Ballyman Rd which joins Thornhill Rd at it's end.
Posted by Castlehunter at 18:52