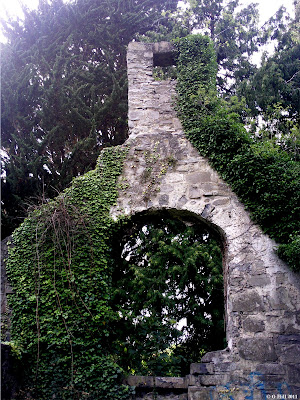 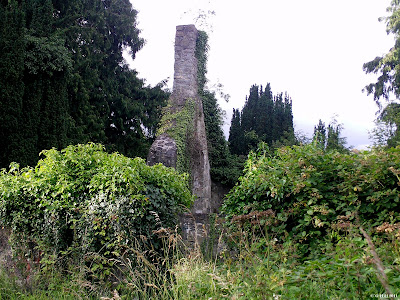 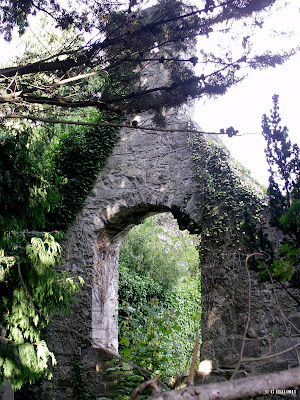 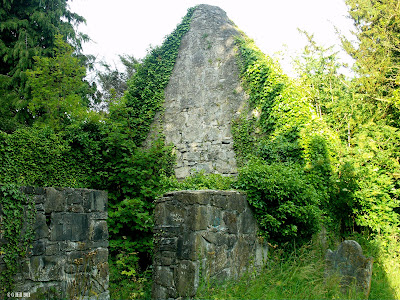 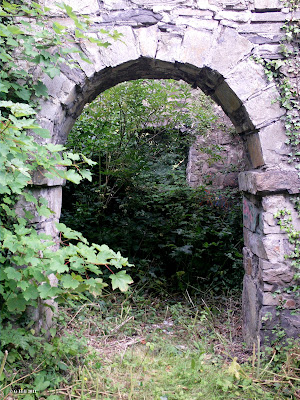 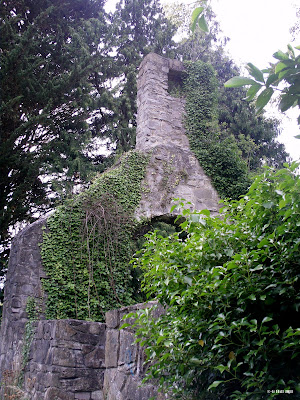 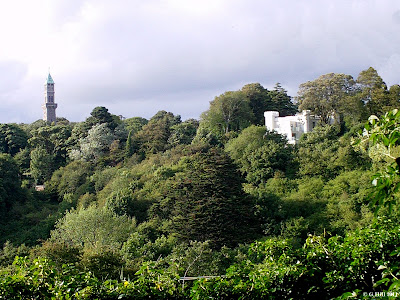 Above Image: The view from the Church across the Liffey
Valley towards Chapelizod 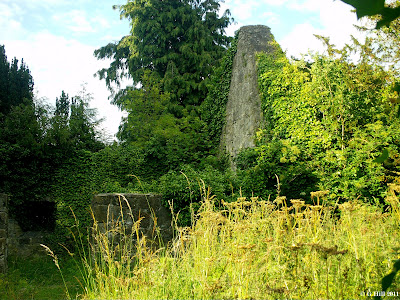 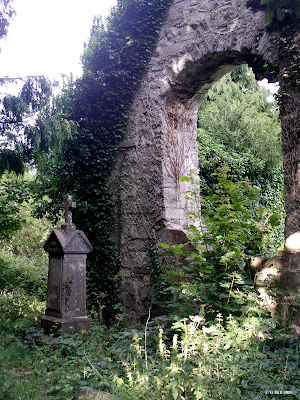 Situated just off Mill Lane in Palmerstown Lower, this interesting old ruin lies deep in undergrowth and almost forgotten.
The Church was first recorded in annals in 1220 as belonging to the Prior of St John the Baptist without Newgate. The Church however certainly dates back at least 200 years more and is a good example of its type, a simple Nave and Chancel. It's original name was Stacgory.
The roof long disappeared has left the sturdy walls and Bell Tower intact but little more. It has some interesting stonework on it's arches and it is surrounded by an ancient graveyard which demonstrates that it was still in use as a burial ground until the mid 1700's.
The Church is overlooked by an area called the Clump Field which itself is a prehistoric Ring Barrow and from one of the surrounding walls of the Church there is a fine view of the Liffey Valley.
It was not difficult to find the Church. We parked at the elbow turn of Mill Lane just past the local Palmerstown football grounds. We were a bit dismayed to see a tall rusting fence impeding our way with a large sign saying Trespassers will be prosecuted as land owned by a developer. The state of the fence and sign indicated to us that this developer may have fallen on hard times as the site beyond is so overgrown it is akin to Jurassic Park!
We discovered a kind of access gate in the left hand corner of the fence and so decided to have a quick look. A short walk along a sort of trail led us to the ruin. The silence in this place was almost deafening. There is a definite creepy atmosphere to the ruin and one of the local stories is that it is haunted the ghost of a man stabbed to death here sometime in the past. After a while whether it was this thought in mind or the fact that we might be caught trespassing led us to leave briskly.
To find the Church ruin take the N4 exit for Palmerstown (now rejigged to Palmerston) and at the first set of traffic lights take a left turn into the Village. At the T-junction in the Village turn right and then take the left hand turn onto Mill Lane. You can park at the sharp right elbow turn at the top of this road and you will see the fence to your left. Enter at your own risk, although We did see some locals enter after we left.

After the discussion on this post I decided to make a return visit to this old Church to see how renovation was going. Unfortunately I visited on St Patrick's Day (guaranteed to rain!) and the weather turned nasty. I did manage to access through the fence as before and the once overgrown stretch to the Church is cleared if not a bit muddy. There is some fine work going on here between the locals and the council but the ruins are fenced off at the moment so I will return again later in the Summer when hopefully it can be accessed. One thing of note, a sign has been posted on the fence at the entry point to warn of the presence of Giant Hogweed on the site. It warns that contact with the plants which can stand up to 12 feet tall and especially their sap can cause awful damage to skin and in some cases even hospitalisation. I had never heard of these plants before and when I googled I certainly was sure I didn't spot any on this visit. But looking at the photos above from 2011 when the site was overgrown I suspect the vegetation peeking in from the bottom left of picture 3 may be the offender. If it is the case I certainly wasn't aware at that time and think it was extremely lucky that I didn't come into contact with it. I'll be keeping an eye out in future for these plants especially when visiting the more out of the way ruins. 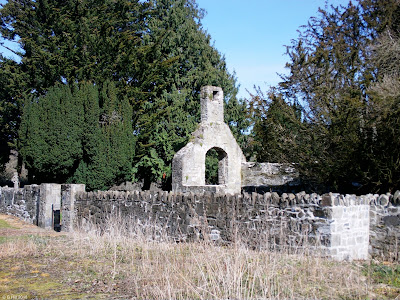 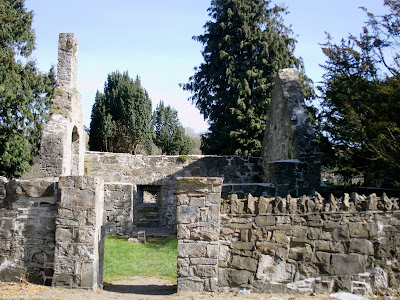 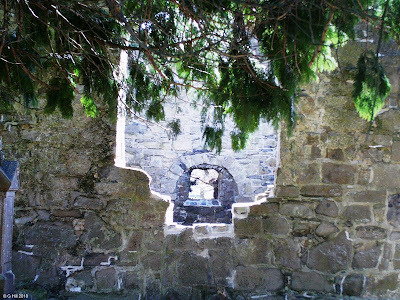 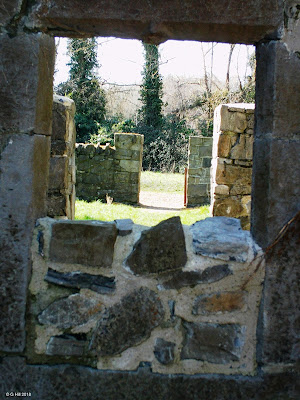 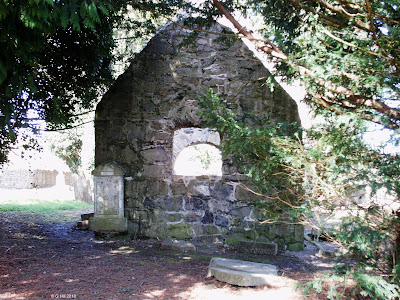 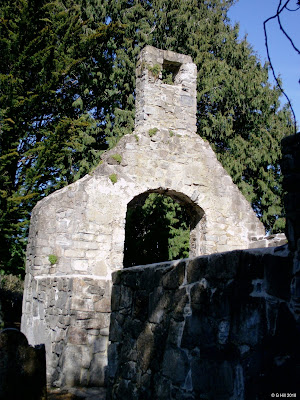 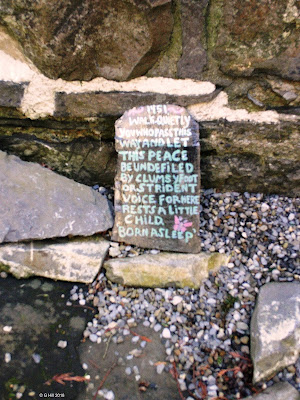 Above Image: An unusual little memorial 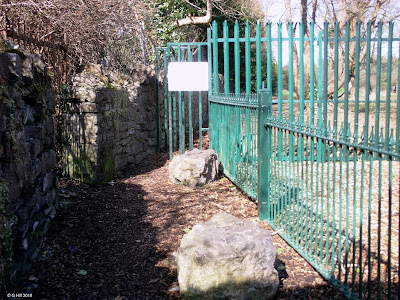 Above Image: Entry point from the road


I finally got the chance for a return visit in more clement weather and what a huge difference the
clean up has made. Well done to all involved. It is so much easier to access and walk around. I was able to park easily outside the entry point alongside some boarded up cottages. Well worth a look now if in the area.
Posted by Castlehunter at 13:22