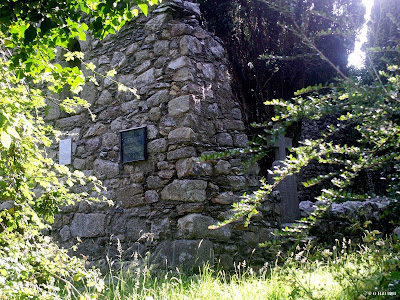 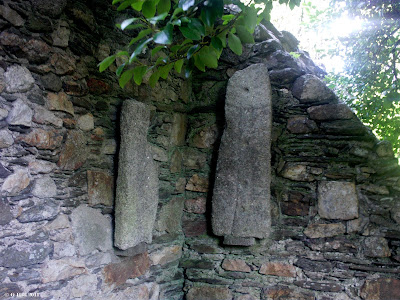 Above Image: Some of the unique Grave Slabs 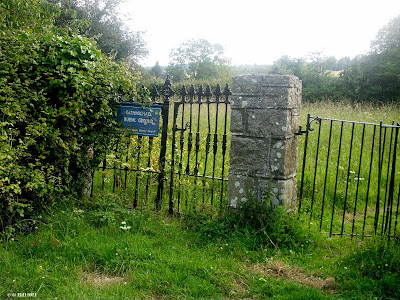 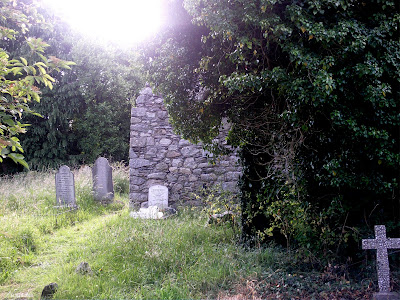 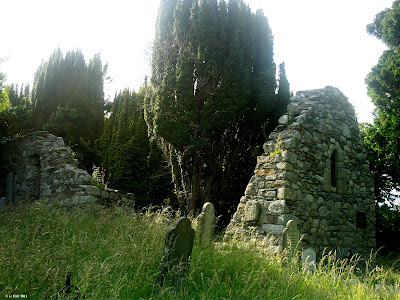 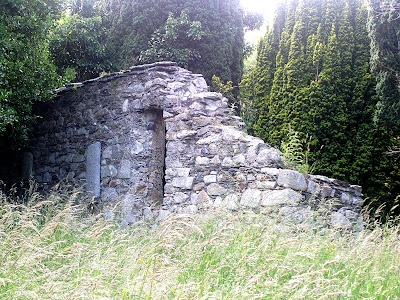 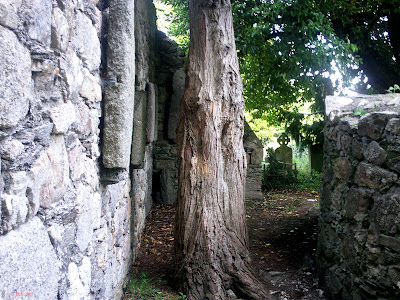 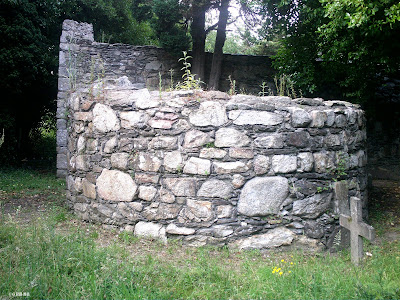 Above Image: "The Skull Hole" 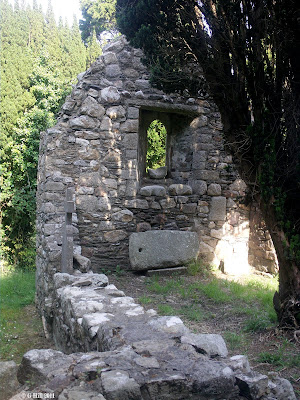 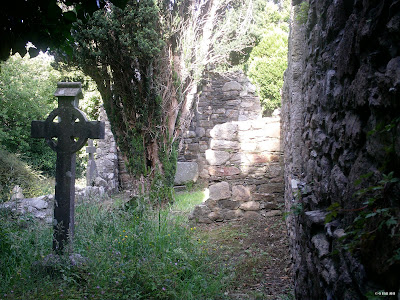 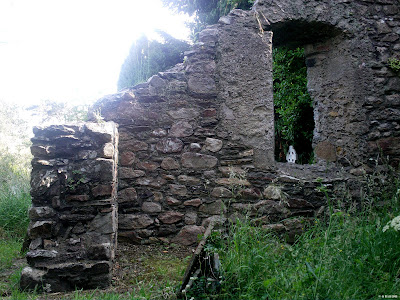 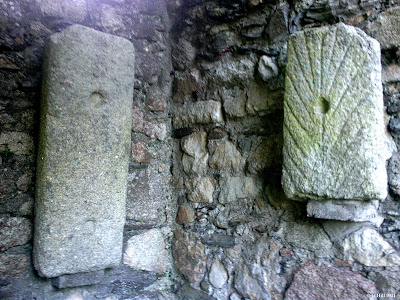 Old Rathmichael Church stands in ruin in the old Barony of Uppercross in South County Dublin. The Church originally dates from Norman times but some of it's surroundings are from a much earlier time.It is situated within the boundaries of a huge ancient Ring Fort and the stump of the round tower in the grounds dates back to at least the 9th century. This Tower was reduced to it's present size at the time of the purge of local architecture in the 1400's.The Tower became known as "The Skull Hole" when it was used to hold skulls and bones from the adjacent graveyard when more burial space was required. Legend has it that there is a vast tunnel underneath this tower that leads down from Rathmichael towards the coast. Sou terrains have been discovered at the site, so there may be an element of truth here.
The Church itself consisted of a 12th century Nave and a 13th century Chancel. It was regularly in use until it fell into ruin in the 1600's. It is believed to be named after Bishop McTail of Kilcullen who was greatly regarded and the name over time changed to Michael.
The East gable is the most prominent remains and there are quite a few unique grave slabs attached to the walls which were original grave markers of Christians from the Viking era. No two are the same.
We discovered the Church ruins while we were scouting the area. It seems to us that nearly every road or lane leading off Ballycorus road leads to something. The ruins lie at the bottom of a very narrow country lane, so We parked the car on the main road and walked up the lane. At the top is a large white gate on the right which has all the usual threatening signs of death to anyone entering here. But to it's left is a  smaller gate which is unlocked. We entered and closed the gate after us. There appears to be one or two houses off the lane, but the track seems to be a right of way. About 50 yards up this rather bucolic track We found the entrance to Rathmichael on our right. There wasn't as they say a sinner about.
There is not a lot of the Church remaining but what does is worth a look over. The grave slabs attached now to the ruined walls are amazing. There is a great sense of peace in this spot. Adjacent is the stump of the Round Tower. You can climb up on this but there is little to see inside except some items left by visitors as providence of their visit. Being so off the beaten track there is no evidence of any anti-social gatherings or graffiti as we have found in some places, so all in all it remains in good order, apart from the grass which is being allowed to grow wild. A site such as this should really be maintained regularly.
To find Rathmichael ruins take the Ballycorus Road from Kilternan and when you have passed Puck's Castle Lane , look for a narrow lane way on your right with a Cul-De-Sac sign. Find a safe place to park. There is a Small road just between Puck's castle Lane and the Cul-De Sac that will do, or you can drive up the narrow lane way where at the white gate you could possibly tuck the car in against the hedgerows. As mentioned there are a couple of residents who use the lane way so it's best not to impede their way. This is one site well worth your time.
Posted by Castlehunter at 13:18