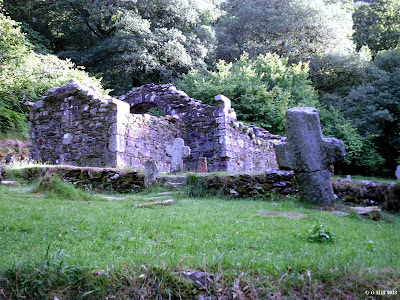 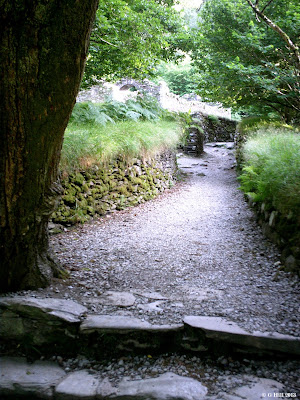 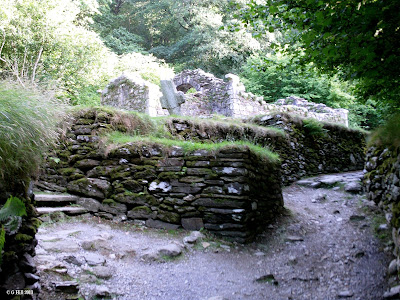 Above 2 Images: The approach to the ruins. 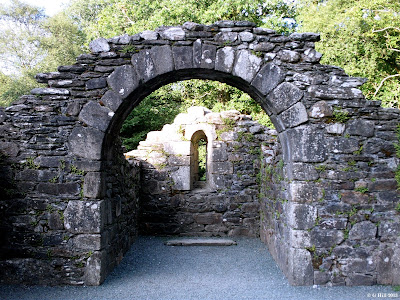 Above Image: The central arch. 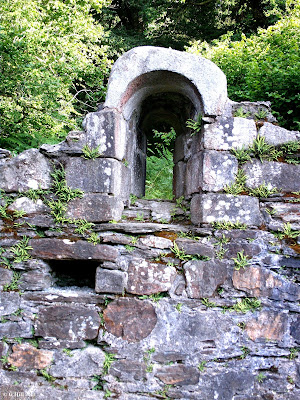 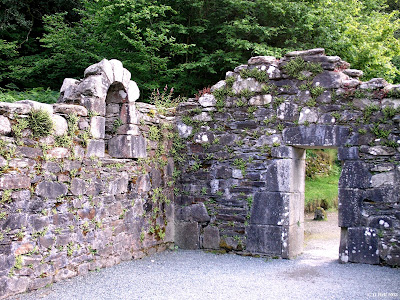 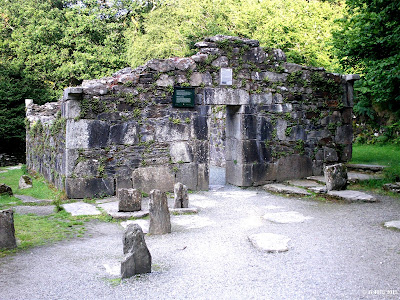 Above 2 Images: The entrance door inside and out. 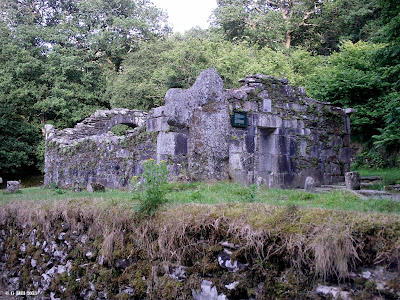 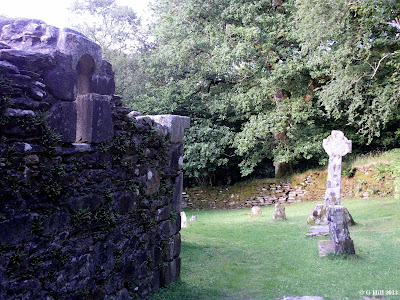 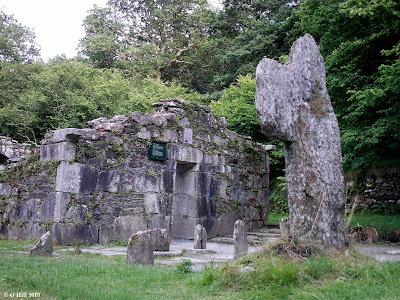 Above Image: Low angle of an ancient cross. 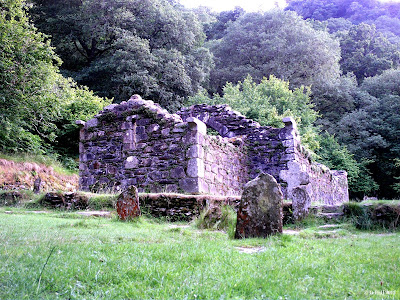 On a trip to Glendalough you will come across many, many ruins one of the nicest being that of the remains of Reefert Church nestled in woodland above the upper lake.
The small nave and chancel structure is believed to date back to the 11th century and was considered an important place of pilgrimage. Those determined few who made the long and strenuous pilgrimage to Rome returned bringing with them soil from the tombs of great martyrs which was used to consecrate the ground at Reefert giving it its name "Righ Fearta" or "Graveyard of the Royals"
The Church would have remained busy with pilgrims even after the English raids in 1398 left much of Glendalough in ruins, but with the onset of the reformation the pilgrimages waned.
When we visited Reefert it was an August evening when the tourist levels at Glendalough were easing from another busy day. We decided to cross the stream beyond the visitor centre and take the brisk 1.5KM walk towards the upper lake.You eventually reach a conversion of pathways and a sign directing you to Reefert in the woods to the left. The ruins lie in a very nicely landscaped area which is accessed by climbing about a dozen or so steps to it. These steps are of varying height and a bit uneven, so a little care is needed while ascending them but they also add a little anticipation of what is above.
With the early Autumnal evening light glistening through the trees I must say the ruins looked picturesque in a very tranquil setting.
The entrance is in the West facing wall and consists of a flat-headed doorway and there are rounded windows in the East and West walls. A fine central archway divides the nave from the chancel and there are corbels that lay evidence of a once wooden roof. The sheer peacefulness here leaves no doubt to the imagination that it was a place of reflection.
Surrounding the ruins are quite few ancient crosses some worn and rounded by time and to the North West end a slightly leaning High Cross. This is a wonderful ruin and if visiting Glendalough it is really worth the trek to get to it especially in the evening time during late Summer or Autumn.
To find Reefert Church take the N81 Dublin to Tullow road heading South and approx. 11KM out of Blessington take a left turn onto the R756 for Hollywood. Bypass the village and take picturesque drive for approx. 24KM over the mountains until you see a sharp right hand turn signposted for Glendalough.
There are several parking areas here. If you park in the area by the visitor centre (parking charge) or by the river at  Glendalough hotel (limited but free) then you will need to cross the stream on the far side of the main Monastic site. Once over the little wooden bridge take the track to the right and about 1.5KM down this track you will come to a conversion of pathways with another small bridge on the left and a sign that points to Reefert. Alternatively if you visit during daytime and want to avoid the longer walk then it is possible to drive beyond the Glendalough hotel to the upper lake car park. From here take the pathway in the South West corner of the car park and about 100m along it joins another path. Take a left here and walk for about 250m until you reach the conversion of pathways and the aforementioned  small wooden bridge and sign for Reefert.