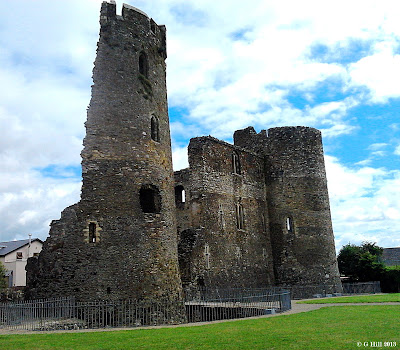 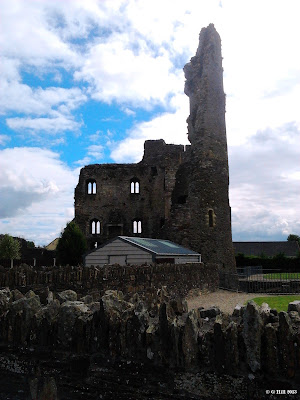 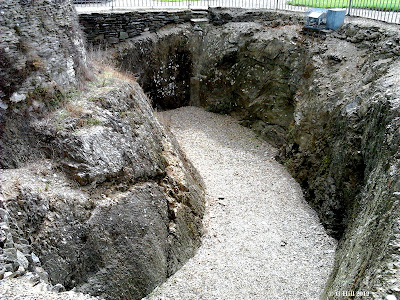 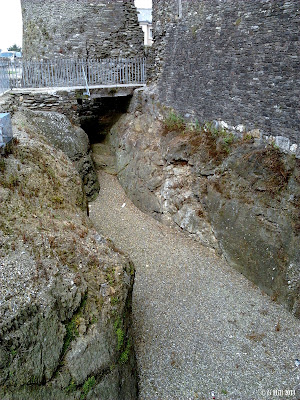 Above 2 Images: The supposed moat, but
actually a deep ditch. 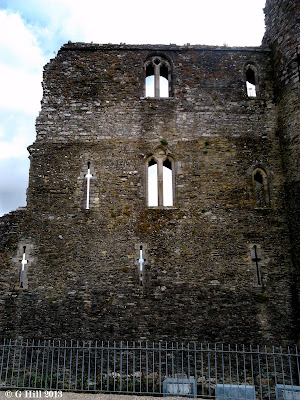 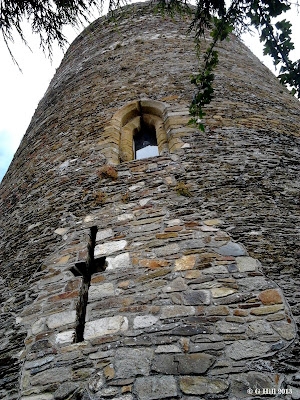 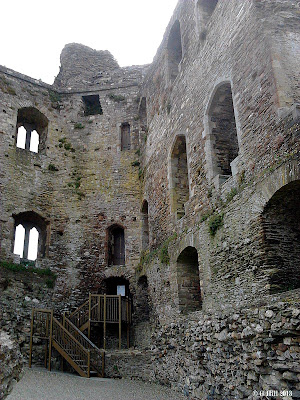 Above Image: Showing the 3 levels of the keep. 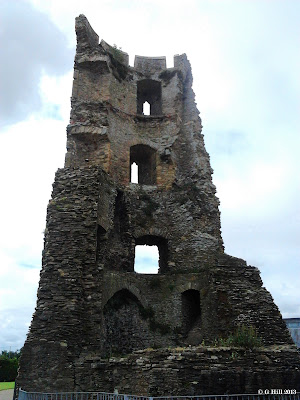 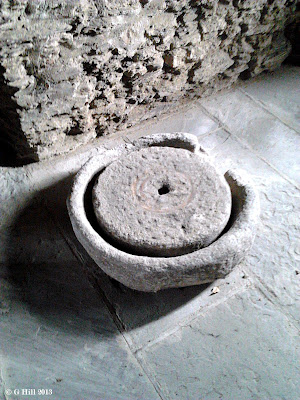 Above Image: Grinding stones in the tower. 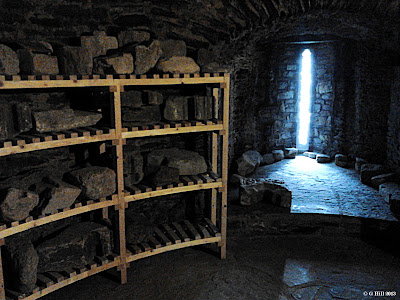 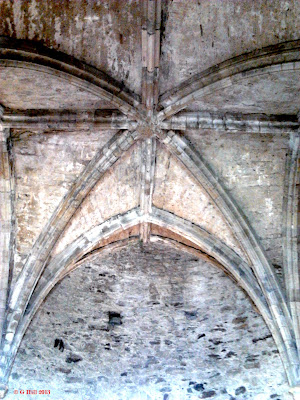 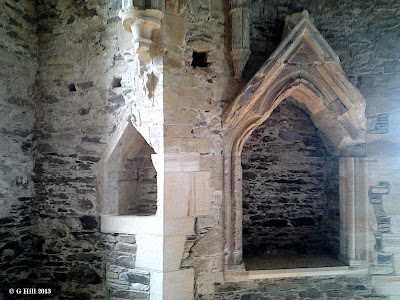 Above Image: A piscina (left) & a sedilia (right) in the Chapel 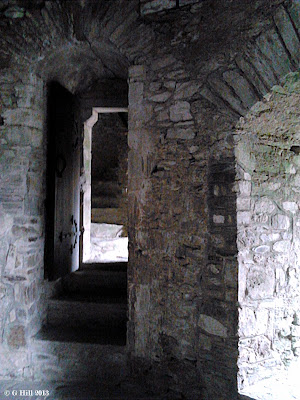 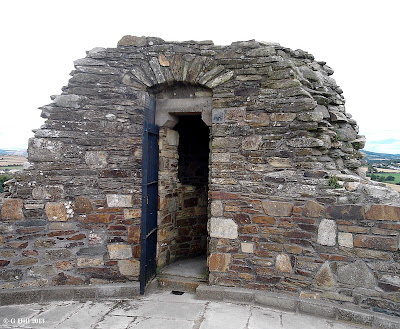 Above 2 Images: doors leading to and onto the roof. 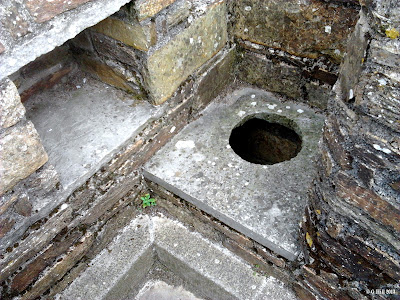 Above Image: A garderobe on the roof. 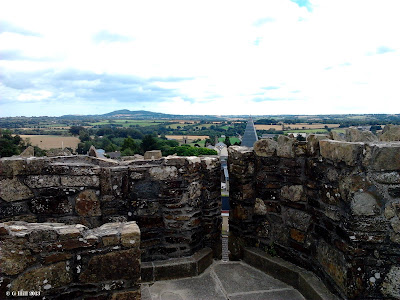 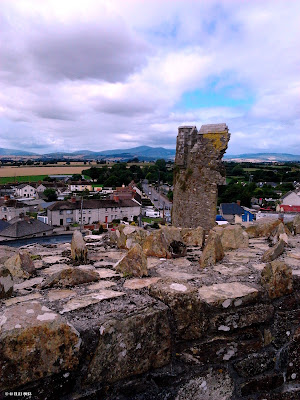 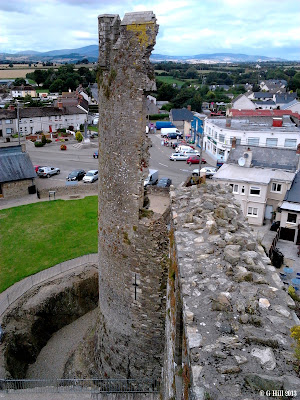 Above 3 Images: Views from the roof of the intact tower. 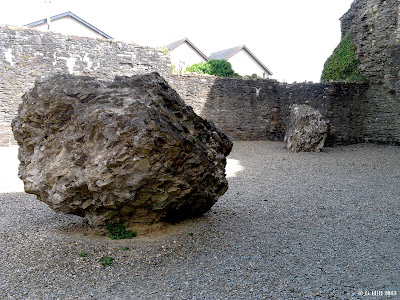 Above Image: All that is left of the North East & North West
Quarter towers 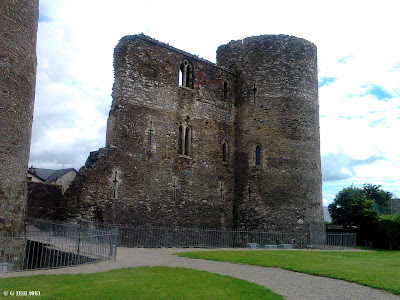 The great four towered Castle of Ferns was constructed upon a base of volcanic rock by William Marshall in approx. 1220AD. Marshall who whose name was attained by being a marshall of the King's horses became one of the most renowned knights of the period. The Marshalls held control of the Castle until it was burnt by the Irish clans in 1346 and was eventually taken by the Kavanaghs who held control over the town of Ferns until 1540 after which the crown regained control and a Governor installed. The Castle was finally blown up in 1641 by Charles Coote a parliamentarian and not by Cromwellian forces in 1649 as presumed before. Coote also ordered the death sentence to most of the locals. A chilling precursor of what was to come several years later.
The Castle was surrounded by a deep ditch for defence. This was not a moat as it did not contain water but was used as a dump for waste food and such so that it became a pit of foul smelling and probably diseased matter. A deterrent no doubt to any attackers but in fact just as dangerous to the inhabitants within.
This ditch was eventually filled in but was excavated in the 1970's by the OPW and most of it reopened although only to about half of its former depth. Painstaking work has been made to restore what could be repaired and this shows through to this day.
We visited here in August at the height of the summer season and sure enough there were a few visitors but considering that it it is such a dramatic ruin and that there is a visitor centre with a free guided tour I'm surprised that it is not overwhelmed. Although you can freely walk around the Castle and its courtyard, the only access to the tower and basement is by way of the guided tour which I strongly urge you to take. It is free after all!
The courtyard contains what look to be two large boulders. These are in fact the only remains of the two rear tower that were destroyed in the destruction of 1641. The rest of the destroyed tower's stones were subsequently pillaged for other local construction. The tour takes you to the chilly basement and also to the Chapel with it's fine vaulted ceiling. There are quite a few steps up and down and narrow in places but you are all the time guided through safely. You will also have a chance to view the very historical town of Ferns from the roof of the tower. This was truly amazing especially on a clear day as you can see for miles.The true destruction of the other partially standing tower really strikes through from this vantage point.
If only all ruins were so easily accessed. We spend a lot of time being warned off by bulls in fields or "no trespassing" signs that it is a Shock to the system to view this magnificent ruin hassle free. Thanks must go to the OPW. but I want to give special thanks to the very friendly bunch of people staffing the visitor centre and in particular Christine who led our tour. Her knowledge and informal delivery of so much interesting information made the visit so much more worthwhile. Do not miss a visit here.
To find Ferns Castle take the N11(M11) from Dublin to Wexford. The road runs straight through he town of Ferns.When you reach the roundabout in the town take the road to the right of the pointed modern Church. This is the continuation of the Main St (R745). Drive about 200m until you reach a Londis supermarket on your right hand side and then park in the small car park opposite it on the other side of the road. This is adjacent to the stile and entrance way to the ruins.
Posted by Castlehunter at 14:41