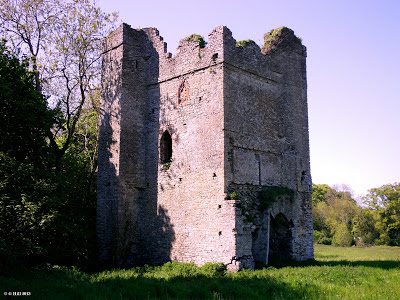 Above Image: The East side ( to the right) with evidence of
non extant attached building 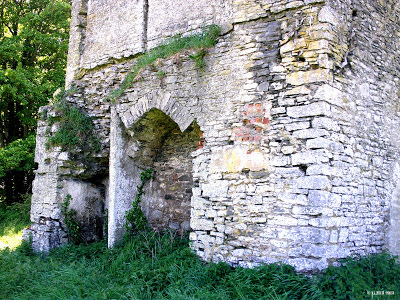 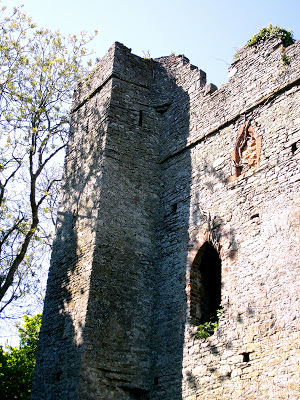 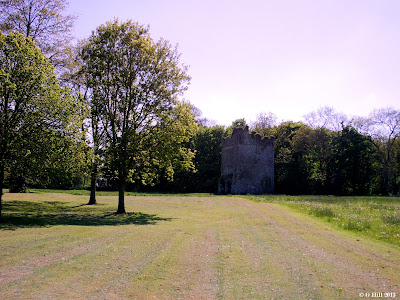 Above Image: The Castle in picturesque parkland 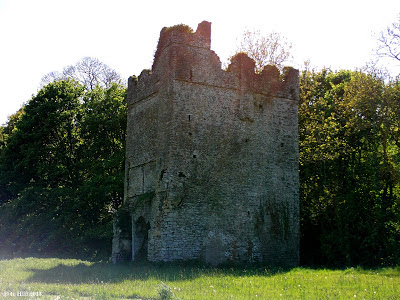 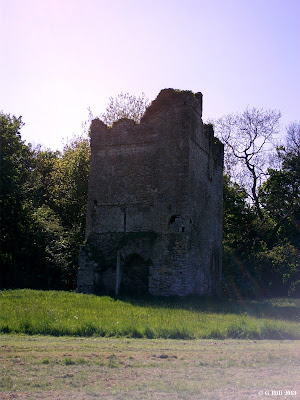 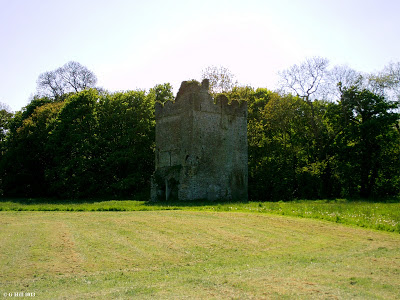 This 15th century Tower House is tucked away closely against woodland like a disobedient child told to stand in the corner. It is situated on the lands belonging to Newbridge House Demesne in Donabate Co Dublin. The tower was probably part of the £10 Castle scheme devised in 1429 by King Henry VI where a landowner would be paid said £10 if he built a Defensive Tower to aid in protecting The Pale.
The tower walls are still in good shape standing to full height and records state that it was inhabited until at least the 1700's. Following that it fell into disrepair and was utilised over subsequent years, amongst other things, as a byre. It has flanking towers at the South West and North East corners. The East facing wall bears evidence of a once attached large building which would have been added later to the original structure but has now long since disappeared. The North facing wall features the entrance door although there appears to be a secondary door on the West side.
I wasn't sure what access there was to this Castle it being located on a demesne. Newbridge House is open to the public and the lands operated by Fingal County Council with the Castle ruin situated about 100m inside the entrance gates. The road outside offers no parking and the driveway inside the demesne is a no parking zone monitored by CCTV. All that was left to us to do was to take the long driveway up to the House and use the parking facilities there, then walk back towards the gate. The day we visited was a gloriously sunny one and it was actually quite pleasurable a walk.
While there is a throng of visitors up at the house and adjacent adventure park, poor old Lanestown Castle sits solitarily huddled against the trees. To our disappointment I think we found out why. Its bricked up.
Within this tower there is a barrel vaulted roof and a spiral stairs intact, but the Council (probably for safety reasons) have sealed up all of the doors. A few years back there apparently was some sort of access through a hole in the West facing door but this too has been shored up. A real pity as I would have liked to have climbed this tower. So all we are offered to see now is the exterior which is nonetheless interesting with its crenellations and turrets, so if in the area it is worth your time to stop and view. I also really like the location of this ruin in it's picturesque surroundings. Perhaps one day the Council could reopen the tower and renovate it a little giving people a chance to see inside. Its a shame to leave it as it is especially with the amount of visitors to the park. It's  a good example of its type and deserves better treatment.
To find the ruins take the M1 Dublin to Dundalk motorway and exit at junction 4. Turn right at the top of the exit ramp onto the R132 and cross over the motorway bridge to the roundabout on the other side. Take the right hand exit onto the R126 for Donabate. Drive for approx. 2KM and you will see the entrance gates on your left for Newbridge house. Once inside the gates you will see the ruins on your left a few metres on. Park in the car park up at the House for convenience.
Posted by Castlehunter at 19:58