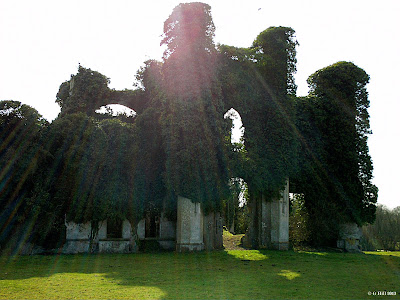 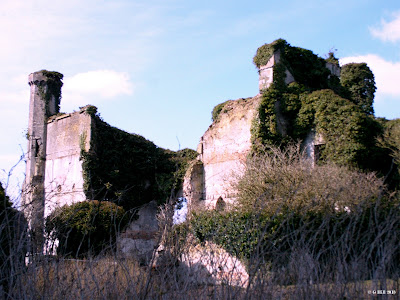 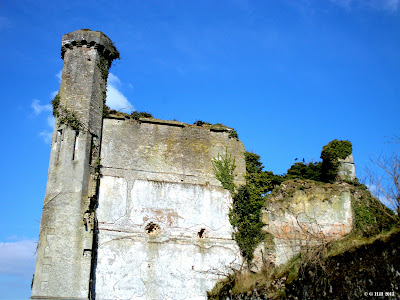 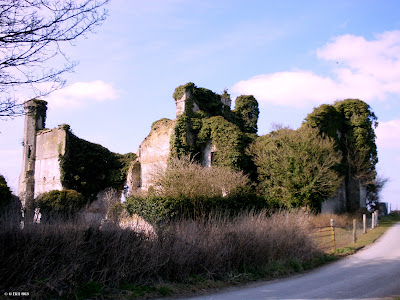 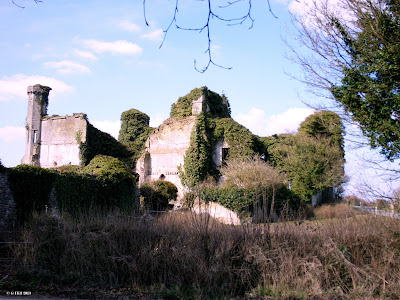 Above Image: The ruins slowly being shrouded in ivy 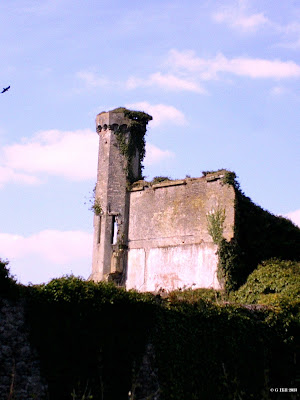 Above Image: A single bird heads for a tower roost 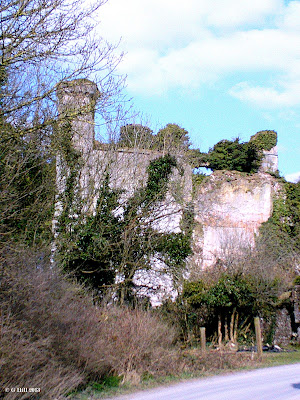 A relatively recent ruin this, Moydrum Castle was built around 1814 on the site of an earlier house from the1750's by the first Baron Castlemaine, William Handcock. The original lands were handed to the Handcock family during the 17th century Cromwellian plantation and this new two storey seven bay castellated mansion was created to reflect his new important position. This Gothic manse stood firm until the night of July 3rd 1921 when in an act of reprisal for the burning of some local farmhouses by the British military style Black and Tans, a local group of The Irish Republican Army targeted Moydrum mainly as its owner was a member of the House of Lords. Castlemaine's family were given 15 minutes to vacate the Castle and then it was torched. Completely gutted it was never again occupied and the lands fell back ironically to local farmers again completing the circle of ownership.
Today Moydrum sits crumbling near the Moydrum Poultry farm slowly being enshrouded in creeping ivy.
The land is surrounded by wire fences and large "No Trespassing" signs. In 1984 world renowned band U2 featured the castle on the cover of their album "The Unforgettable Fire". Access then was no easier than it is now but apparently they just found a way over the fence and photographer Anton Corbijn took the shot.
We took a detour on a trip west just to have a look at this iconic Castle and after a few narrow by-roads found the site. The wire fence is not easy to get over but if you were daring enough you could do it, but I'm led to believe that what little interior is left is covered in graffiti by U2 pilgrims. Not really enticing enough to shred your undercarriage on barbed wire!
The building itself is very striking. With the ivy removed it would reveal some of the fine design by architect Richard Morrison but it seems the owners are happy to keep it as muted as possible to avoid legions tramping over their land. Definitely worth stopping for due to its historical associations but probably dangerous inside as the crumbling walls would attest.
To find Moydrum Castle, take the M6 Kinnegad to Athlone Motorway  and exit at Junction 9. Turn right at the top of the slip road onto the R916. After about 100 metres there is a right hand turn pointing to Moydrum. Turn right and follow this road for approx 1Km until you see a right hand turn with a bungalow on the corner with a tall pillared gate. Turn right down this winding road until you reach a small T-Junction. Turn left and follow the road until you see the Castle ahead of you. You can park at a field gate opposite the site
Posted by Castlehunter at 17:16