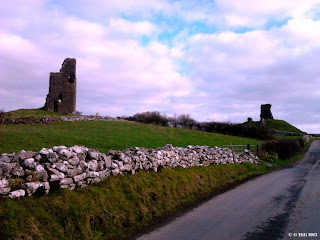 Above Image: The Church Tower with the Castle in
the near distance 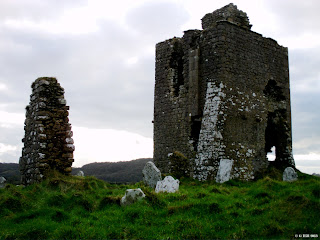 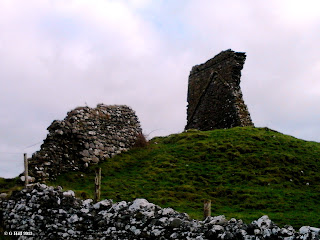 Above Image: The remains of the Castle 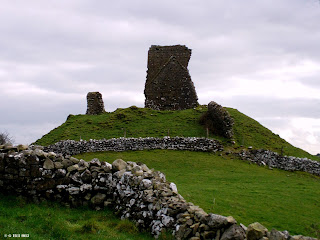 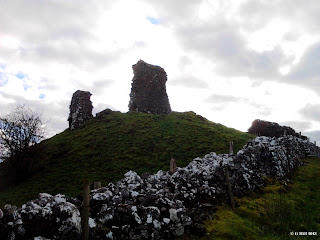 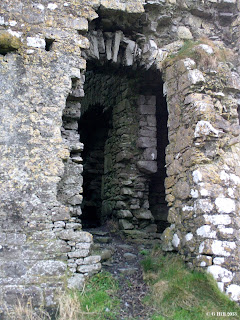 Above Image: The entrance to the Church Tower 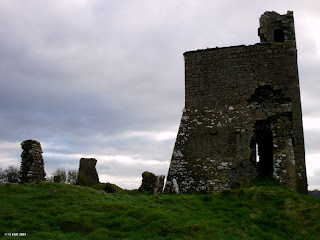 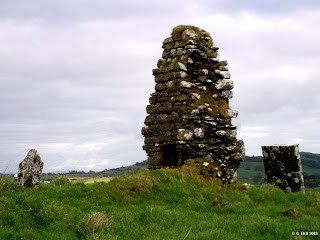 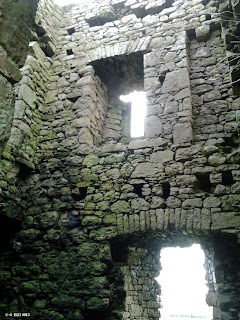 Above Image: Within the Church Tower 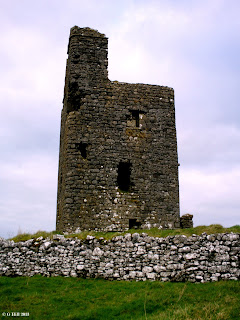 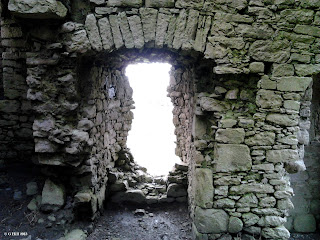 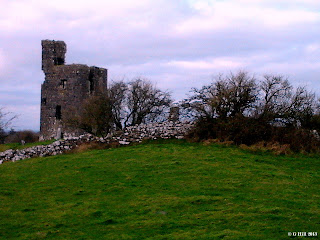 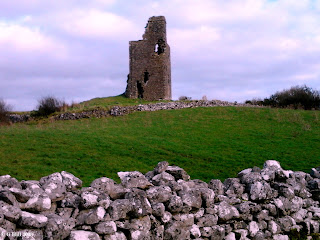 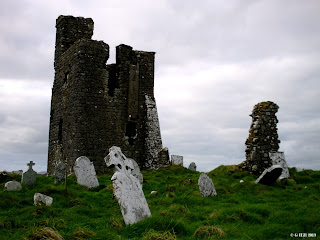 There appears to be a strong sense of historical activity to this site.The undulating mounds, the presence of a nearby Rath and the almost deliberate direction of the ditches would indicate its use as a settlement of some sort in the long distant past. It is believed that a Monastic site might once have stood here initially but certainly on the arrival of the Normans in the 12th century a Motte & Bailey was founded with a wooden structured fort. This became the home of the Barnwalls who occupied this site for nearly 400 years. In the 15th century the fort was upgraded to a stone Castle of which the ruins are what remain today.
On the small hillock opposite the Castle a fortified Tower with attached Church was constructed in 1470 and this is believed to have been under the auspices of The great Fore Abbey (see previous post). The Church remained in use until the late 1600's.
The twin ruins face each other on opposite hills and cast a very dramatic pose when approached on the narrow winding road. I was quite surprised at the ease of access here. Some work had been done by a local authority providing access gates in the stone boundary walls designed specifically for pedestrian use. All you have to do is climb the slight hill to reach the Church Tower. I only wish some other interesting ruins were afforded the same consideration.
The Tower is the more complete of the two ruins. It features rounded corners and on the Eastern facing wall you can enter through a gap in what is actually the first floor This is level with the ground, the original vaulted ground level now being underground. Within, it stands only as a shell.
This Tower was probably designed for clergy use but fortified to provide protection against frequent raids. In one corner a partially intact stone stairs teases with anticipation of further exploration but unfortunately delivers some disappointment as it appears to have fallen away after a few steps denying access to the parapet. There are still a few fragments remaining of the rest of the Church outside but they are slowly being overgrown with vegetation.
A short walk across to the other hill brings you the boundary wall of the precariously placed remaining walls of the old Barnwall Castle. It now stands jaggedly towards the sky. Access here has been inhibited by a wire fence atop the boundary wall but it doesn't take a lot of effort to find a gap to get through, although having said that getting closer doesn't really offer any better view.
I really like these ruins not only for their interesting aspect but because they are placed in a particularly scenic spot. Go and enjoy.
To find Moylagh ruins take the R154 from heading North West from Trim passing through Athboy and on to Oldcastle. As you reach the Town square in Oldcastle take the left turn onto the R195 heading towards Castlepollard and drive for approx 5KM until you reach a very pleasant little country crossroads with a sign pointing left for Dromone. Turn left here and continue on for approx.1KM and you will clearly see the ruins on your left. A small lay-by has been provided opposite the access gate for parking.
Posted by Castlehunter at 16:20