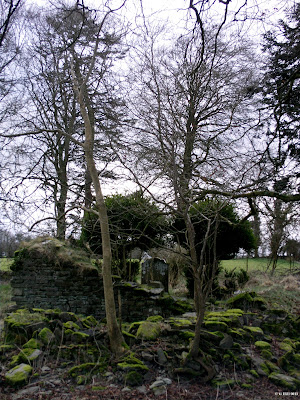 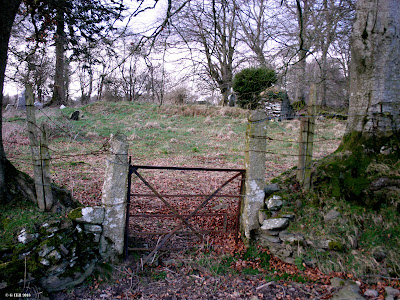 Above Image: The entrance gate at the graveyard. 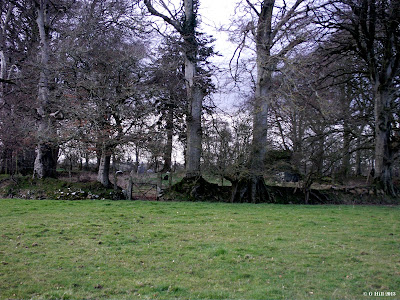 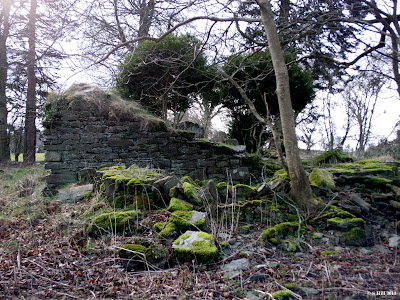 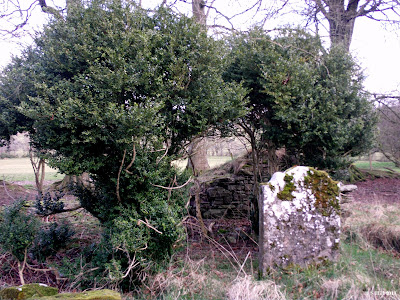 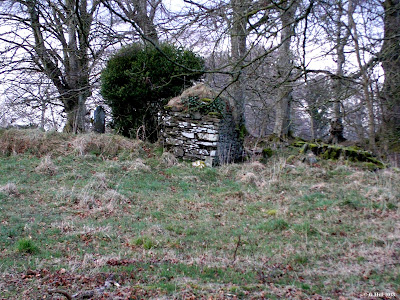 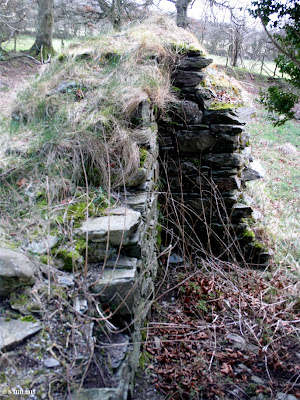 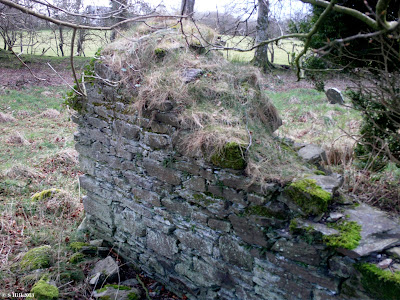 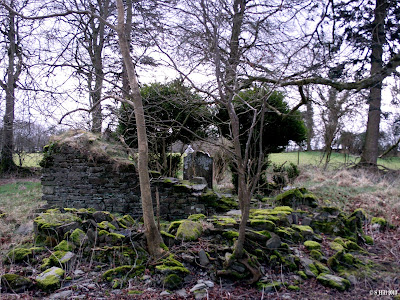 Image Below: All that remains of a wall 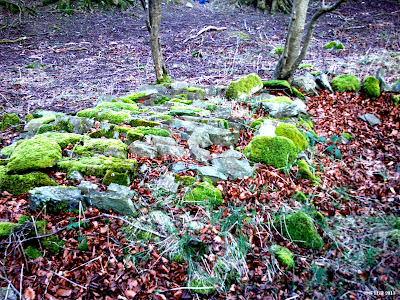 This is a very ancient place and not easy to locate either. All I can discover is that this is what remains of the medieval parish Church of Ballybought. Ballybought is situated in the old Barony of Uppercross in Dublin but along with the parishes of Ballymore and Tipperkevin it was detached and became part of the barony of Naas. The parish and it's church would have been under the Lordship of  Ballymore. Its history is vague but it was recorded as being in ruins on a map dated 1837. No doubt it was just a simple local Church that fell into disrepair due to diminishing patronage and the building of larger Churches in the towns. It is located not too far from the Bronze Age stone circle of Broadleas and there is much evidence of druidical practise in the area especially in the adjacent Townland of Whiteleas. As I say a very ancient place and standing within its almost circular earthen bank walls the air is literally saturated with antiquity.
It took a trip down some narrow roads in the backwaters of East Kildare from Ballymore Eustace to finally find a field gate and what looked in the distance to be a clump of beech trees. The field gate was chained but actually only had a simple screw out bolt that loosened the chain and allowed access. There were no signs prohibiting entry apart from the usual neighbourhood watch type. A short walk over pastureland toward the trees brought us to a small iron gate. This was locked and actually had barbed wire strung through it but it was still simple enough to clamber over. Within there is an old and well overgrown graveyard with some long forgotten stones, some dating back as far as the 1700's. This site was probably utilised more as a burial ground subsequent to the demise of the Church as is the case in a lot of other sites. All that remains of the Church itself are parts of East and South walls which are partially upright and a few courses of stone just above foundation level. The trees are beginning to encroach on the ruins putting further pressure on the remaining crumbling walls. Not a great deal left of it then and I imagine it won't be too long before it will deteriorate further. All the more reason then to have look and document it.
As in all of these hidden places that remain unsigned the incursion of strangers tends to disturb the natural sense of suspicion amongst the locals and it wasn't long before what was deathly quiet on the road outside suddenly had cars slowing down to gaze into the field and locals walking surprised dogs and throwing a watchful eye on our activities. Time to go then as we had seen what we had come to see and there was no reason to arouse any further suspicion.
To find Ballybought ruins take the N81 South from Dublin to Tullow. About 9Km out of Blessington you will come to a crossroads with a sign pointing right for the R411 to Ballymore Eustace. Turn right and drive until you reach the first left hand turn. You will see the Broadleas stone circle in the field ahead. Turn left and drive down this narrow road until you reach a stop sign at a T-Junction. Turn left. Drive for Approx 1KM until you reach a right hand turn.Turn right and about 400m down this also narrow road you will see a field gate on a sharp left bend. Park at this gate and you will find the ruins in the trees about 100m from the gate.