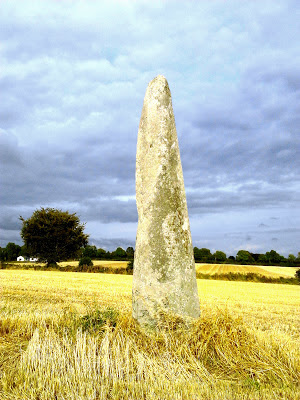 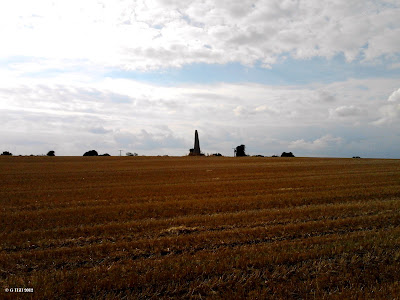 Above Image: The field that needs to be crossed. 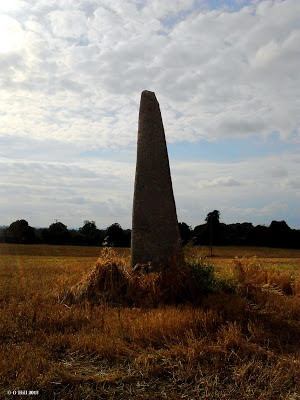 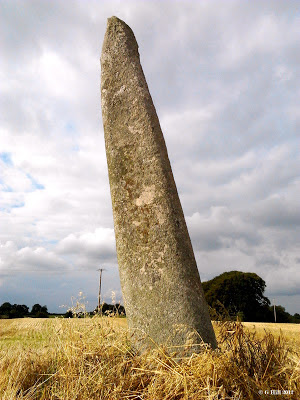 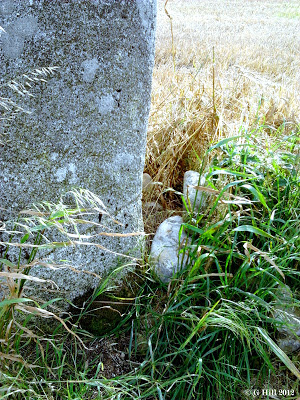 Above Image: Some of the loose rocks around the base. 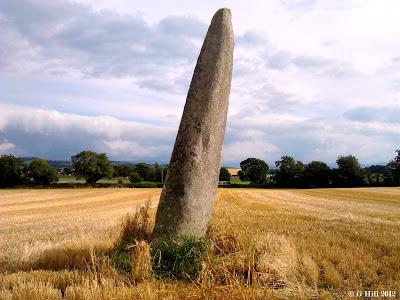 Above Image: Like a giant finger pointing to the sky. 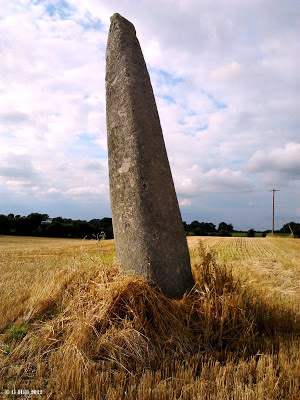 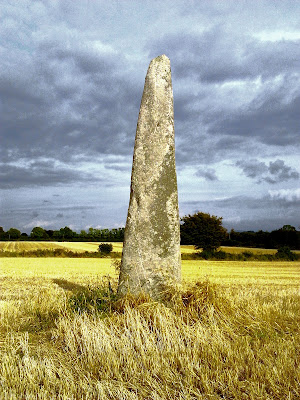 Standing next to this amazing stone one feels a little in awe of its presence. It stands approx. 15 feet high and probably dates back to the Bronze age, yet its purpose remains unknown. It may be a commemoration marker, a way mark or part of an alignment for ceremonies as it appears to be line with the nearby Punchestown standing stone. Punchestown stone or "The Long Stone" is thinner and taller at 22 feet but was re-erected in the past and fenced in, whereas this stone in Craddockstown, although leaning a little to the west, has been left in its original state. This I feel makes it all the more interesting.
On closer view you can see a line of quartz running through it and on a sunny day this stone glistens. It is quite thick at the base and seems to have some disturbed rocks surrounding it (perhaps the remains of a burial chamber?) and it tapers to a point at the top.
The stone is situated on a small crest in a working crop field. I would imagine that during the spring and summer it would be advisable to get permission to enter before tramping all over the crops. There is a nearby farm on the L2023 if you need to enquire. Ideally visit in September when the crops have been harvested, not only is it easier to cross the field but the stone is fully exposed to view and looks all the more dramatic. We visited on one of those days and met no one else while we were there. The field newly harvested posed no problem to cross.The stone looks different from every aspect but with the sun behind you while looking at it really makes it stand out.
The field itself is surrounded by high bushes but if you park opposite it at the main gate of Punchestown racecourse (on non race days it is virtually deserted) then walk down the road in an easterly direction for about 40 yards or so and you will see a gap in the bushes with an exposed fence on an embankment that is easy enough the climb over. This gives you direct access to the field and you will spot the Stone in the near distance. Enjoy your visit but have respect for the owners property by keeping along the tracks made by the tractor where possible. This is one megalith I would strongly recommend seeing. It simply exudes its presence in spades.
To locate the stone take the R411 south from Naas until you reach  a crossroads with the L2023 and a sign pointing towards Punchestown.Turn left here and drive for approx. 200 yards and park outside the entrance to the racecourse. You will see the line of bushes opposite. Follow the road further on foot for about 40 yards and you will find the gap with the fence exposed.
Posted by Castlehunter at 16:50