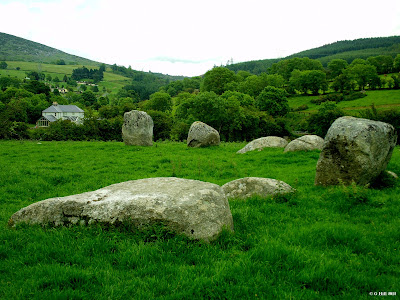 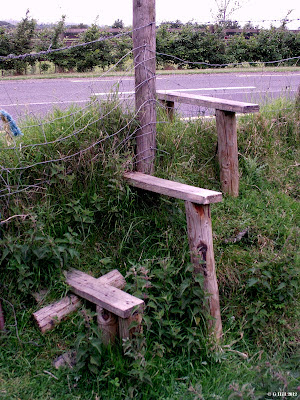 Above Image: The Wooden Stile
Below Image:  The sign to look out for. 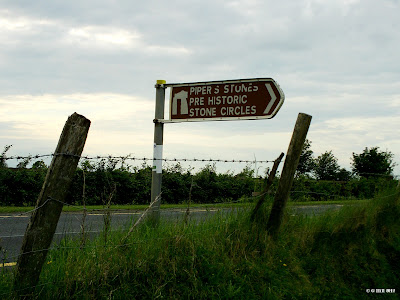 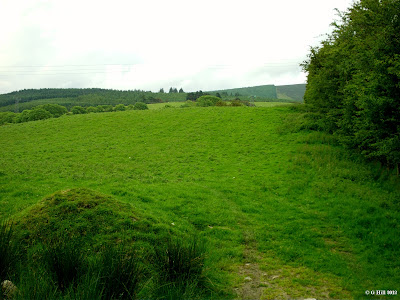 Above Image: The hill leading up. 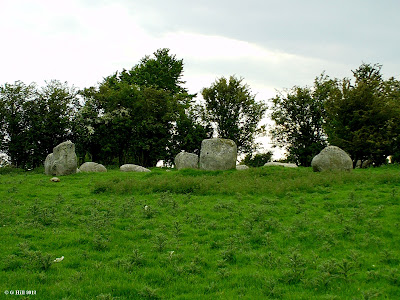 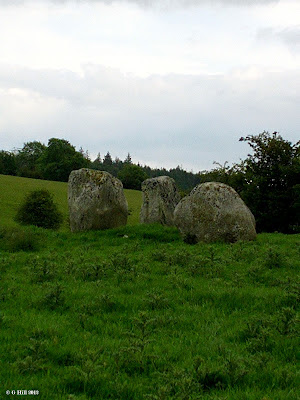 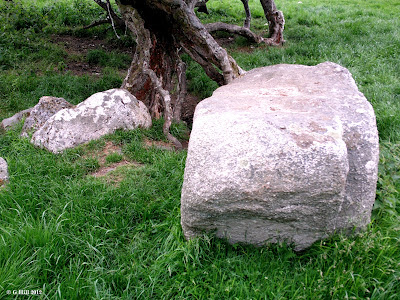 Above Image: There is a definite sheen to the stones. 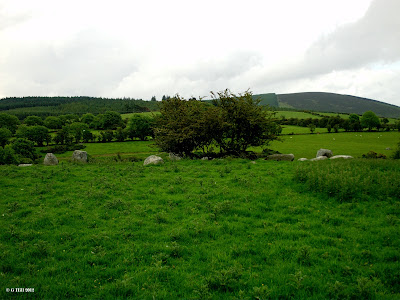 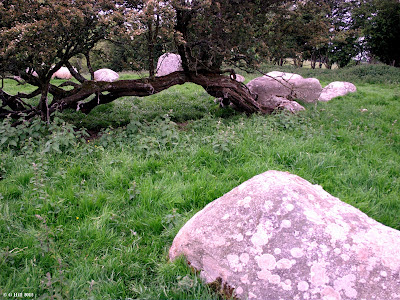 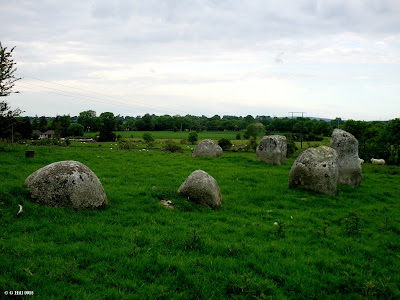 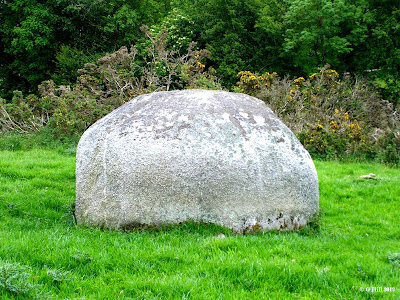 Above Image: The Outlier (The Piper) 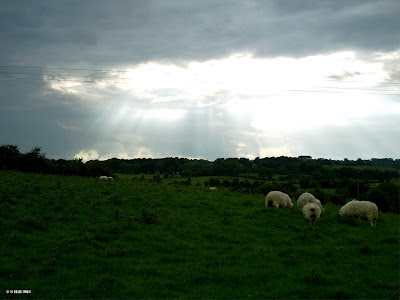 Above Image: Illuminating skies over the site

The ruins of this megalithic stone circle contains 16 of a possible 29 stones. It sits upon the ridge of a grassy hillock that is almost surrounded by among others Conlon's Hill, Drumreagh, and Church Mountain giving it a sheltered feeling. It is officially known as Athgreany Stone Circle being that it is in that town land but it is more commonly referred to as "The Piper Stones". This name derives from a legend where a piper and some damsels were turned to stone for the sacrilege of dancing upon the Sabbath day. The piper is represented by a large Stone outside the circle called "The Outlier" and the remaining stones are the damsels. Legend or not this feels like a a very mystical place. The stones while not fully dated are believed to fall into the category Bronze Age (2000BC-500BC). These stones were once the site for pagan ceremonies such as sun worship, and indeed some more recent equivalents appear to still occur today by modern sects, as remnants of these activities have been found, usually following a solstice.
The site is designated as a national monument and although there is a sign on the roadside pointing in the direction of the circle, it is positioned on a very straight stretch of the N81 where traffic tends to whizz by probably not noticing. Taking this in mind it is best to slow down after you have passed a left hand side road signposted for Athgreany and you will soon come upon the direction sign. There is only a marginal hard shoulder for parking and this is right at the sign. It is a bit awkward but possible. Access is over a shaky rudimentary wooden stile with partial barbed wire fence running through it so be careful. For a national monument one would think a safer access point would be installed.
We decided to visit these stones on a summers evening and so parked the car against the fence. Being so close to the road it took a couple of minutes to open the door without losing it to oncoming traffic!
Once over the ropey stile it was a short walk forward past some wary looking sheep. A few yards on we came upon a national monument info board. From here we turned right and headed up the grassy slope. The nice thing about this walk is the anticipation and you don't catch sight of the circle until you have crowned the hill. The first view is wonderful. I love these stone circles especially when they are almost compete. This one has a diameter of roughly 70 feet. 14 stones form the remains of the circle with 2 additional stones slightly to the north east. Of the 14 stones in the circle only 5 remain properly upright. The rest have either fallen over or some attempt was made to move them, why, is a puzzle as they are not positioned in a location that is of any use to farming but for grazing. A shame really but nonetheless they still adamantly remain. Sheep in the field wandered in and out of the stones and finally upon our arrival scurried down the hill.
About 40m east of the circle you will see the Outlier Stone (The Piper). The location of the circle away from the road and in such picturesque surroundings adds to the overall ambiance of the place and standing among the stones there is to me a very palpable feeling of antiquity. The only signs of modernity are some electric wires and a distant house tucked beneath the hills.This site being so ancient is very much well worth visiting.
To find "The Piper's Stones" take the N81 from Blessington towards Tullow. Just after Hollywood you will see a left hand turn for Athgreany. Pass this turn and a short distance on you will spot the direction sign on your left. Park as close to the fence as you can for safety.