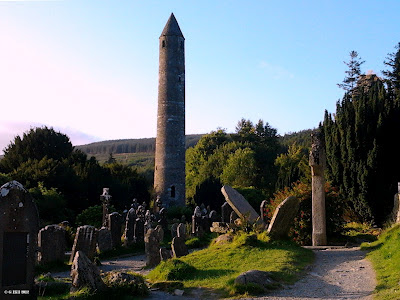 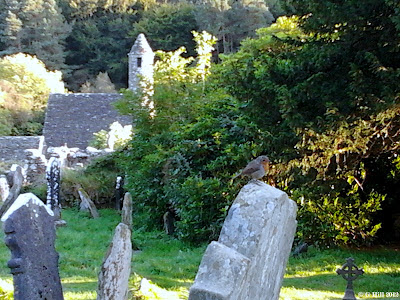 Above Image: Note the Robin on the gravestone in the foreground 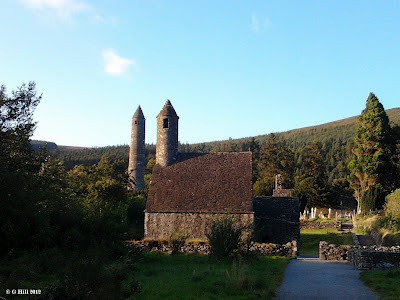 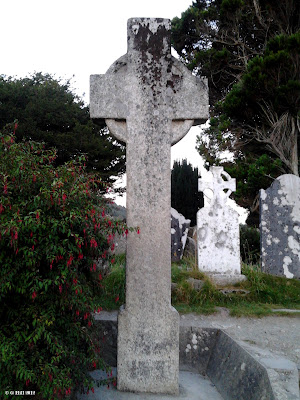 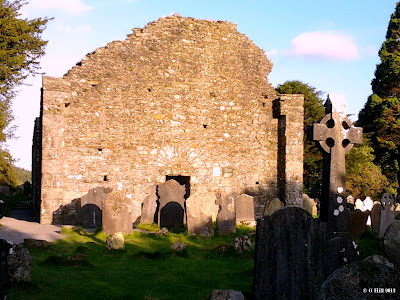 Above: Gable end of the Cathedral 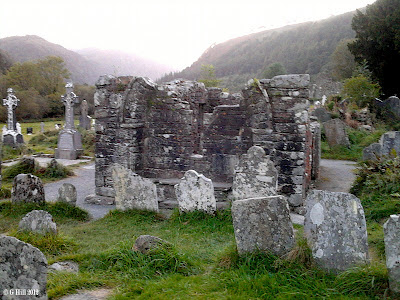 Above Image: The Priest's House 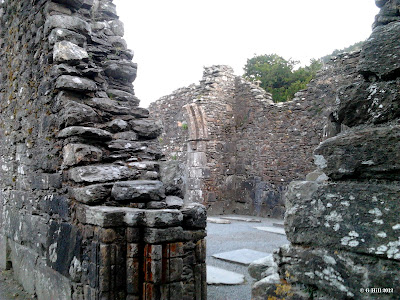 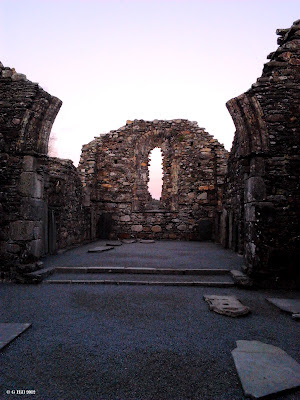 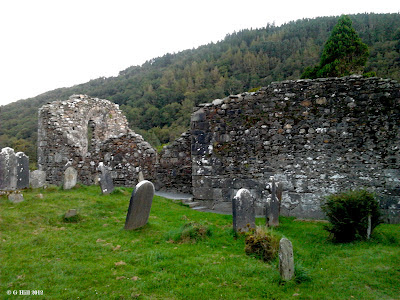 Above 3 Images: Remains of the Cathedral 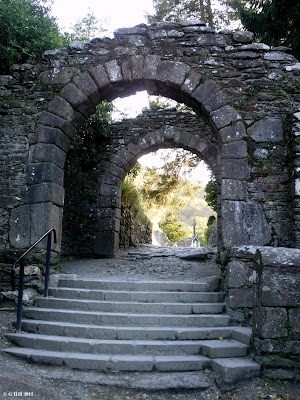 Above Image: The Entrance Arch 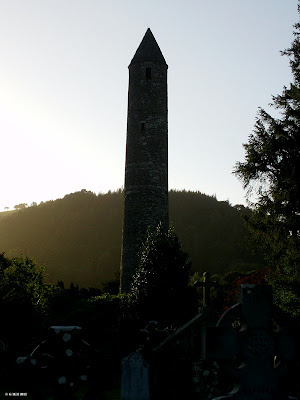 Above Image: The great Round Tower 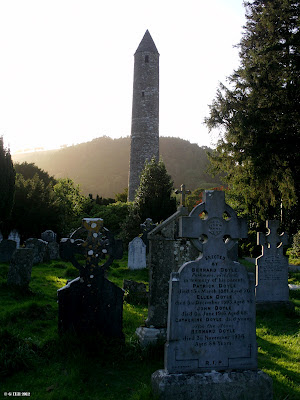 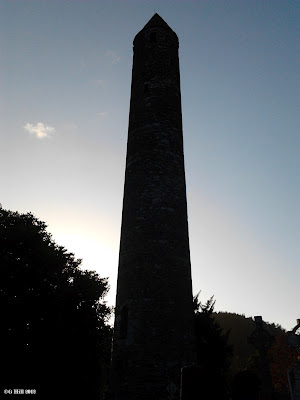 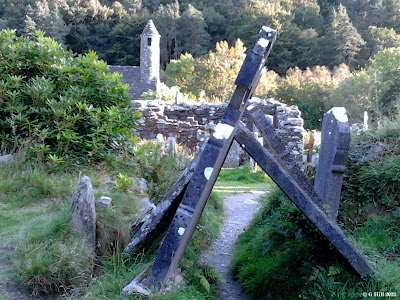 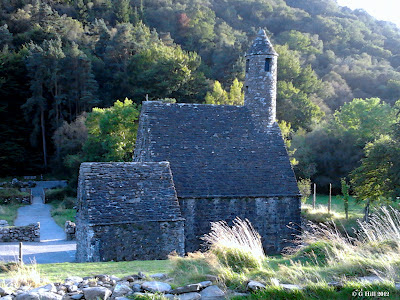 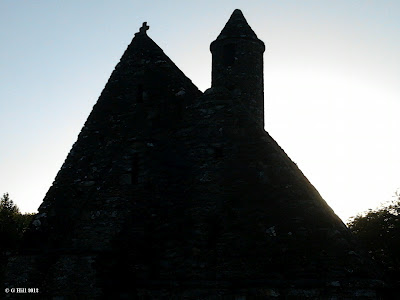 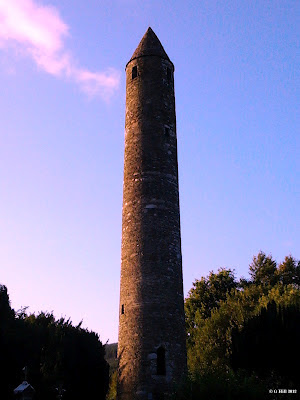 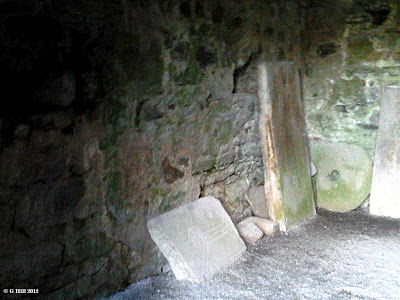 Spectacular in both it's location and it's beauty, Glendalough stands as a fine example of an Irish monastic settlement. Founded by St Kevin, the original monastery was formed as a place of tranquility, reflection, study and the copying of manuscripts. It grew in time to be truly a monastic city with domestic and visitor dwellings and even a farm. St Kevin's fame as holy man spread far and wide and he attracted a great many followers. He himself died in 618AD but the settlement continued to thrive. Most of the existing ruins were constructed between 900AD and 1200AD on the original site.
In 1111AD it was designated as a diocese of North Leinster and in 1128AD St Laurence O'Toole became Abbot. Glendalough's centre of attention waned in the early 1200's when it was united with the diocese of Dublin. English raids in 1398 resulted it being left in ruins. From there on it became more a focal point for pilgrimage.
There is so much to see in the Glendalough. The valley itself holds many other ruins other than the monastic hub and we will try to cover these in future posts.
The first thing that greets you is the fine arched gateway. It stands as a truly unique structure and some of the original paving is still in evidence.This gateway can be found at the bottom of the approach road beside the river and the Glendalough Hotel.
You will need some time to have a really good look around. This site is a tourist attraction so I would recommend if visiting, especially in the summer months, to go in the evening time when all the tour buses have departed. We visited on a fine September evening around 6PM and saw no more than half a dozen others there. This gave us the full effect of the tranquility of the place and a good chance to take some uncluttered photos.
The Round Tower, the most prominent feature, is in good shape. The ruined conical top was reconstructed using original stones and it stands majestically at approx. 90 feet high. The doorway as in most Round Towers is a few yards above the ground and would have been accessed by a ladder and then the laddeer pulled up, protecting the monks within from raiders. All valuables and food stocks would have been stored in one of the four storeys within. The top of the Tower has four windows, each pointing North, South, East and West respectively.
In the shadow of the great Tower lie the small ruins of the Priest's House which again was carefully reconstructed from original stones using an 18th century sketch as guidance.Also in the area are wall fragments of St Kieran's Church uncovered in 1875 and a tall complete High Cross called (no guesses!) St. Kevin's Cross which is situated near the Cathedral ruins.
Nearer the river on the far side of the site is the well preseved St Kevin's Chuch (AKA St Kevin's Kitchen) a marvellous small Church with a a small coniocal Tower mirroring it's larger cousin. Within are some grave slabs propped against the wall.
Probably the largest ruins are those of the 12th century Cathedral. This building would have been very important in it's time and had many additions made to it, but has now been somewhat decimated over time. The wonderfully decorative east window has also sadly suffered but some of the decorations still remain.
As mentioned, the valley extends outwards in both directions along the river and some designated walks can lead to ruins of other Churches, the lakes and even a disused mining village. This is a highly recommended site to visit. If you dont mind crowds then anytime is good otherwise, as I would prefer, off peak times give a more rewarding experience.
To find Glendalough, take the R755 from Enniskerry and follow on through Roundwood and Annamoe until you reach Laragh. Keep right onto the R756 and drive for approx 1 mile and you will see a side road sloping downwards on your left. Halfway down this road on the left is the Visitor Centre with ample car parking or if you are going off peak continue on down the hill past the hotel and you can park at the river. Here you will find the large stone entrance arch.
Posted by Castlehunter at 20:31