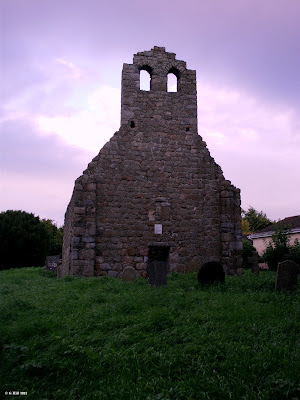 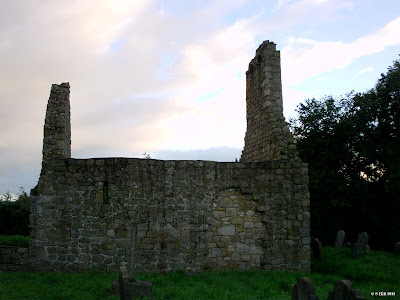 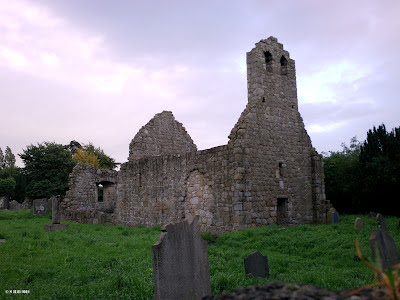 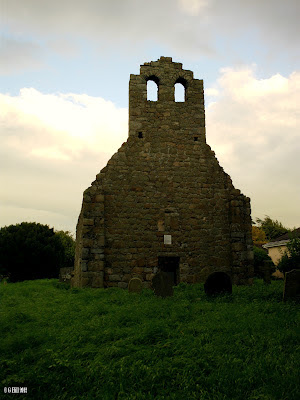 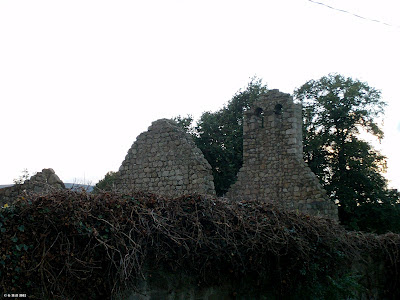 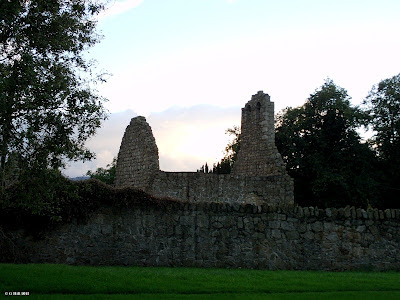 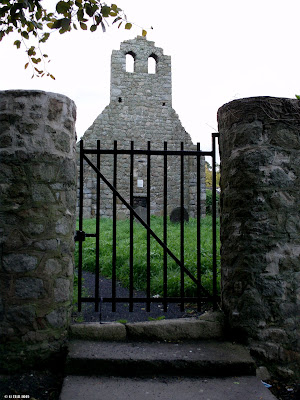 Above Image: That fiendish locked gate! 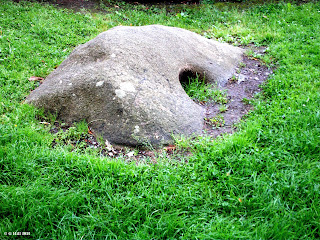 Above & Below Images: The Bullaun Stone 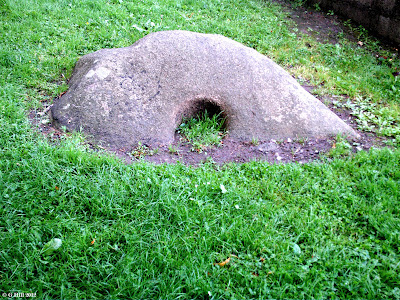 Easy enough to find but not so easy to access this ruin is surrounded by a high wall and the entrance gate remains locked. I am endeavouring to locate the key holder which may or may not be the local County Council. However that aside it is worth a visit because of its easy to find location and the fact that it is situated on one of the oldest ecclesiastical sites in the country.
The original monastic site was founded in the 6th century and was dedicated to St Fintan. When the old monastic building was replaced in the late 11th century under charge of the Augustinians, the Grange Church as it was known adopted the old St Fintan's name. It was used as a Parish Church for several centuries escaping suppression by Henry VIII as the Augustinian Priory in charge submitted to him. By 1630 a combination of poor attendance and an inability to raise funds to make necessary roof repairs set it on a decline into ruination. The parish was eventually absorbed into the nearby parish of Monkstown.The graveyard however remained in use up until the early 1900's.
It was of course disappointing not to get a closer look but we will revisit soon when we locate the key. If anyone knows it's whereabouts I would be extremely grateful. According to a local, the council locked the gate from public access after a series of incidents that resulted in vandalism to the headstones within. I was advised that there are also some interesting grave slabs in the Church, again hopefully to be seen on a future visit. The ruins have on their North East facing side a Bell Tower which is an extension of the wall rather than a separate entity. For it's age this Church still has some very solid walls.
In the green area just in front of the Church gate, nearly unnoticeable, lies a large earth fast Bullaun Stone apparently dating back to the Bronze age. These type of stones usually have cup shaped indents in them designed to collect rainwater and are believed to have healing powers to those who partake of the water collected. This particular Bullaun has one large cup but the stone is sliding over to one side so that the cup is now almost touching the ground and no longer able to fully hold water. We have come across many of these stones on our travels which I will highlight on future posts.
To find St Fintan's ruins take the N11 Dublin to Wexford road and exit onto Kill Lane (R830). Follow this road through the crossroads with Deansgrange Road and the take the second left turn onto Kill abbey. The ruins are to your right a little way down this road. Roadside parking is available. The Bullaun Stone lies just inside the low wall surrounding the green area in front of the Church gate.
Posted by Castlehunter at 19:57