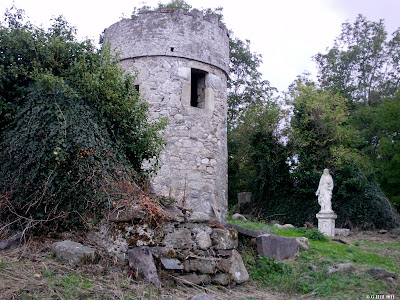 Above Image: The two overgrown piles on each side of the Tower
are all that is left of the Church Gables 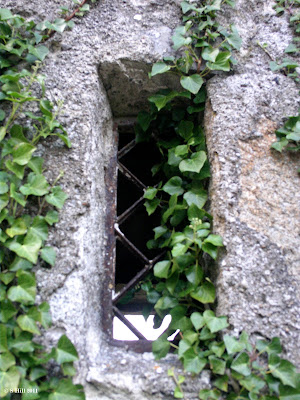 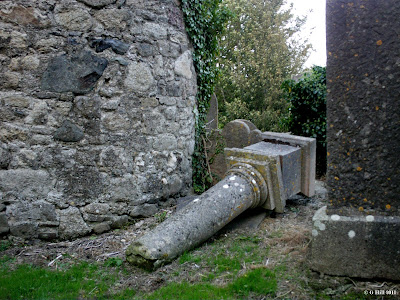 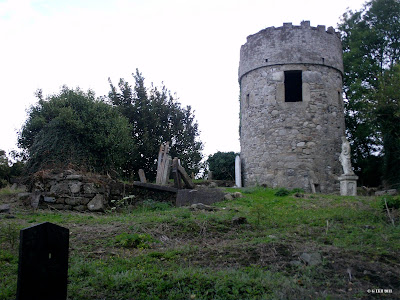 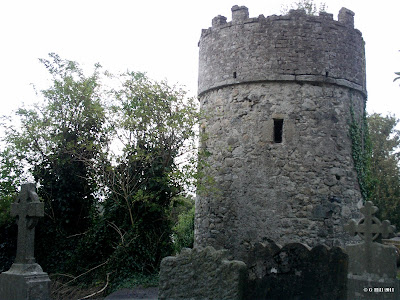 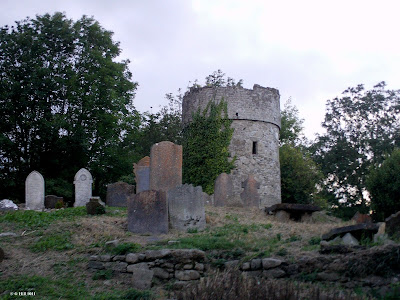 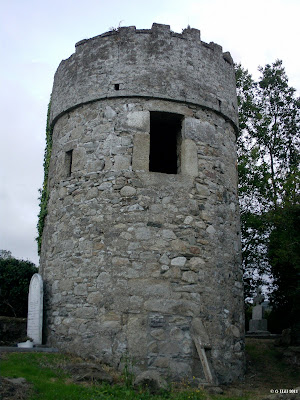 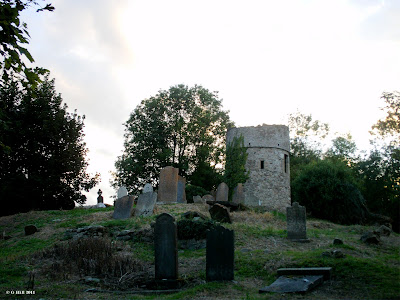 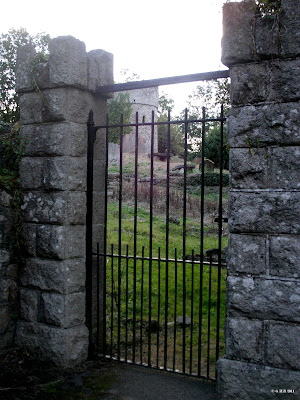 Above Image: the Entrance Gate 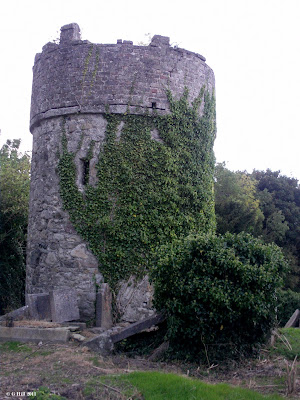 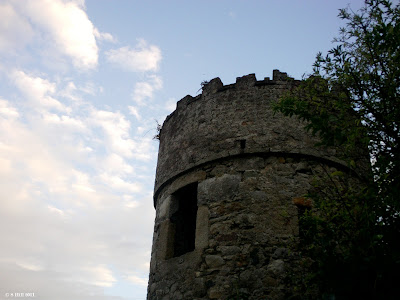 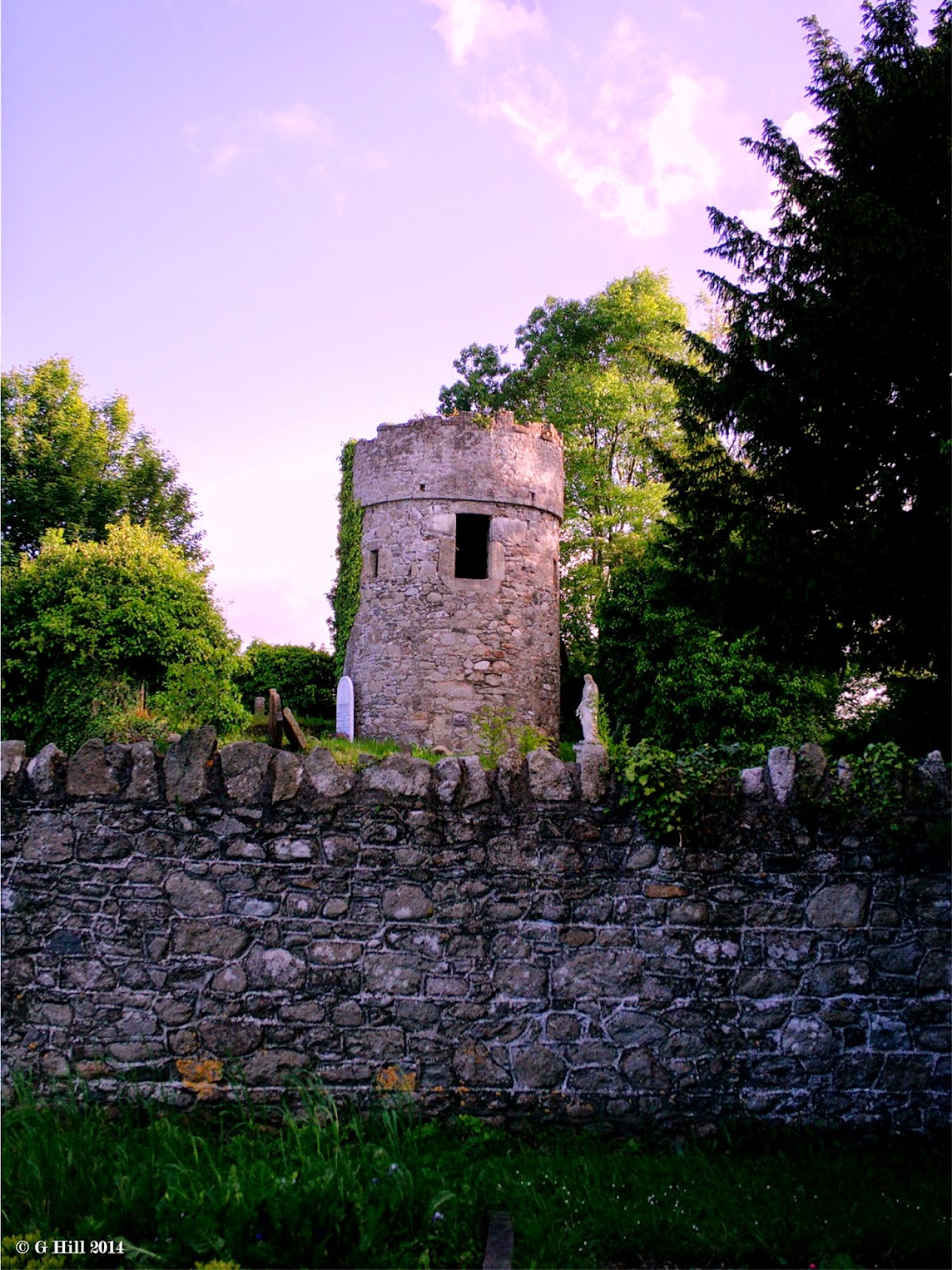 The Cruagh Watchtower stands silently atop a rough grassy Hillock overlooking both the old and new Cruagh cemeteries near Rockbrook. The original site contained a Church predating Norman times which may have been associated with St Dalua..All that remains of this Church today are parts of the Western and Eastern gables. It is believed that the Church may have been demolished to build the Tower in the 1700's. Up to that time it was still in use, but turbulent times in Ireland and the eventual union of parishes led to it's falling into lay hands and finally disuse.
The Watchtower which is situated between the ruined gables was constructed as an observation post so that a sentry could protect the cemetery from body snatchers who became prevalent at the time due to new medical research and the lack of cadavers for examination.
Today, the Tower stands with it's large window on the North facing side gazing like a great dark eye over the old and ragged graveyard. Apparently the Tower stretches a few feet underground but has only one upper chamber. It is still in fairly good condition structurally, but is partly overgrown with ivy. There lies in the grounds of Danesmoate House on Kellystown Road a virtual twin of this Tower, no doubt inspired by the original not too far away in Rockbrook.
Entry to the old graveyard can be found through an iron gate in the wall surrounding the older section and this is located in the left hand corner as you enter through the main gate of the new section from the road.
As a point of interest the site was used as a location in the 1969 film "The Italian Job". You can spot the tower and entrance gate in the scene featuring Michael Caine and Noel Coward at approx 38 mins  into the movie.
To find Cruagh Tower, take the R115 from The Yellow House Pub in Rathfarnham. Continue on through the roundabout at Taylor's Lane and this road then joins the R116 to Rockbrook. After approx a mile you will come to a fork in the road and you will see Cruagh cemetery on your right. Parking is possible outside
Posted by Castlehunter at 20:16