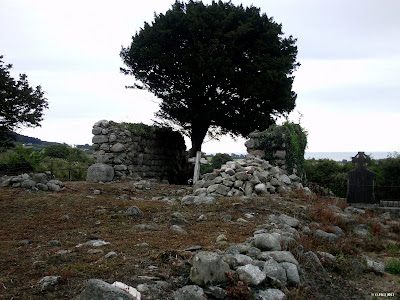 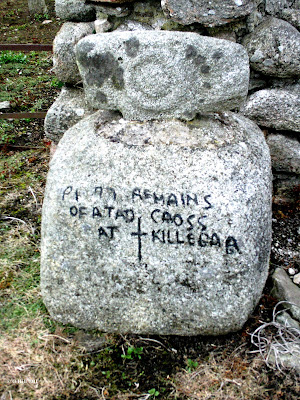 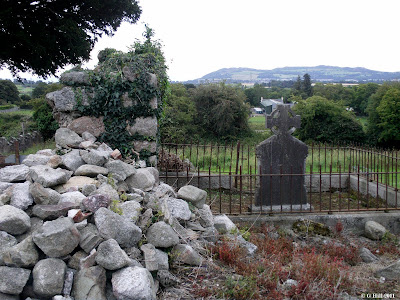 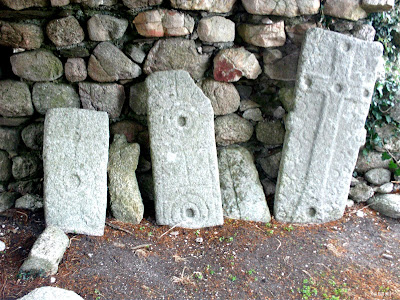 Above Image: The Grave Slabs 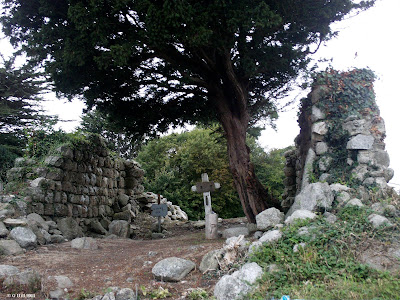 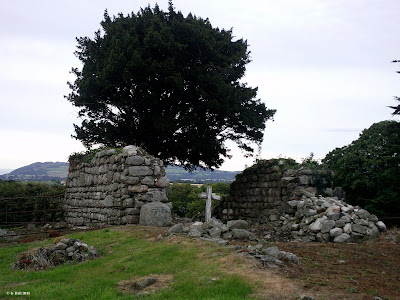 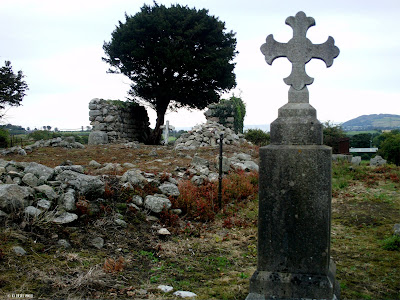 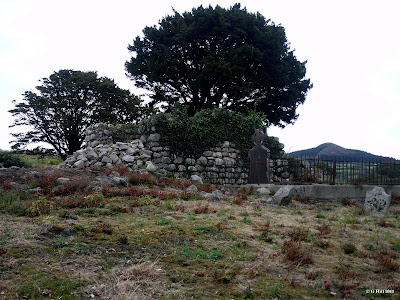 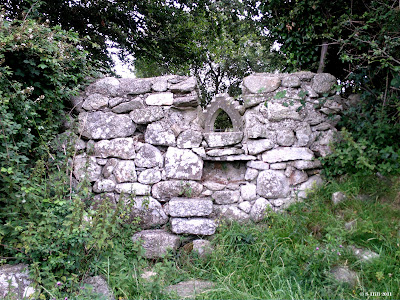 Above Image: The Last Stile 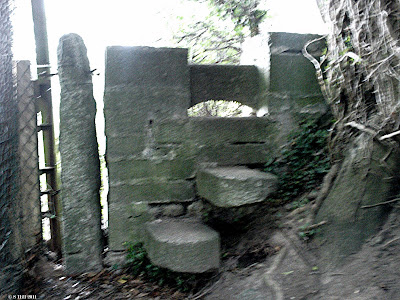 Above Image: The 2nd stile with half-moon aperture 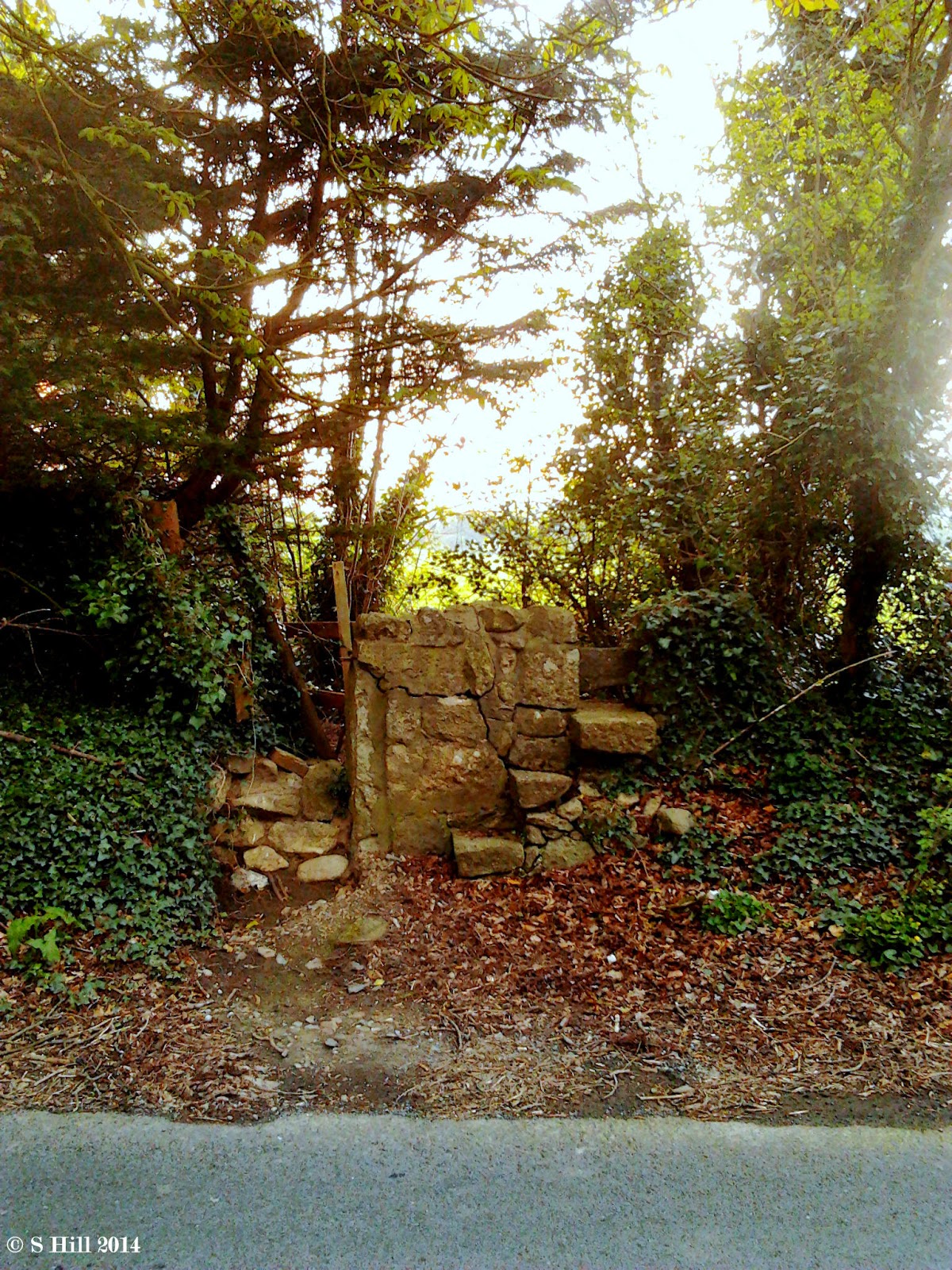 Above Image: The first stile on the R117 roadside 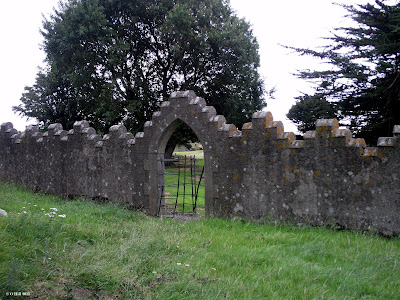 Above Image: The entrance to Killegar 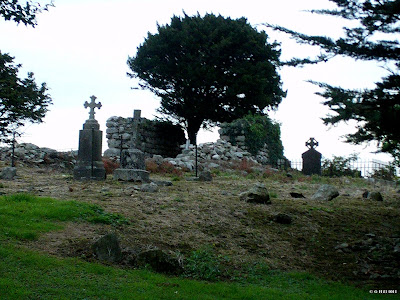 Killegar Church is a very ancient ruin, It is believed to have been built in the 9th century with extensions made in the 1100's following the Norman invasion. The Church was mainly constructed with large field stones that were abundant in the area and it is also believed that the later extension used volcanic rock which may have originally been ballast in a Viking ship!
The original site would have been Monastic and would have housed the Monks in beehive shaped huts. A number of archaeological finds were made during the excavation of a sandpit nearby in 1928. These included two iron bells and a large number of ancient graves that were slab lined. Also on site are some very decorative grave slabs which can be found within the ruin standing upright against one of the existing walls. On the western facing end are the remains of an ancient cross. All in all it is a very old and interesting site with many artefacts in evidence.
The one thing about Killegar is that it remotely situated. I'm sure some locals would have better access through private land, but the easiest way for the non local visitor is to follow the old mass path which runs from Monastery Rd . It's a bit of an adventure which will take about 20-25 minutes walk to get to, but it is in no way difficult.
We parked the car in a disused gateway on the right hand side just a few yards before the Texaco station on the Enniskerry Rd. It is not advisable to park in the large gateway or lane way on Monastery rd itself as they are private and will incur the wrath of the owners. It 's only a short walk from where we parked to the first of four stone stiles which will need to be traversed to get to Killegar. The first stile is among some trees on the right hand side of the road and can be accessed easily. This led us down a very narrow leafy lane way ending in a second stone stile. The stiles all have the half moon shaped aperture which apparently was a feature of the mass path identification route.
We climbed over the second stile and traversed a wide meadow. If visiting, keep to the right hand edge and this will lead you directly to the third stile at the other end. This is private land but there is right of way allowed. There are at times either Sheep, Cows or Horses present, so respect the owner's property. There were actually a few Red Deer present when we passed through.
Once over the third stile you will see a property under construction on your right.This is fenced off from the field and you can cross this field diagonally where you will find a gate on the far corner. The gate is tied but you can untie and retie when finished. Here you will spot the last stile and just beyond is the arched gateway to the walls surrounding Killegar. This gate again is tied so retie when leaving.
Within the walls you will notice that the graveyard is still in use and that the ruins of Killegar Church stand on raised ground above this. From the ruins you can get a great view of Bray Head to the east. There are as mentioned some of the ancient grave slabs on display. The only parts remaining of Killegar Church are the Chancel walls, but there is a great sense of history about the place. As usual, we seemed to be the only people about apart from one builder working on the roof of building in the adjacent field and he even disappeared after a while. Although it's off the beaten track, it is well worth your while to make this enjoyable journey.
To find your way to Killegar, take the R117 from Kilternan towards Enniskerry. A short distance after The Scalp you will come to a Texaco station where the road forks. Just to the right a little before the station is the disused gateway where you can park. Walk along the road to the right of the Texaco; this is Monastery Road. After about 100 yards you will find the first stile. If visiting, attempt to do so on a dry day, as some of the fields could turn out to be quite muddy.
Posted by Castlehunter at 21:05